How was EUTF money used?

As 2021 drew to a close, so too did the EUTF project, a “trust fund for Africa” created by the EU in order to address the causes of illegal immigration. Analysis shows that a large proportion of this funding was dedicated to border externalisation. 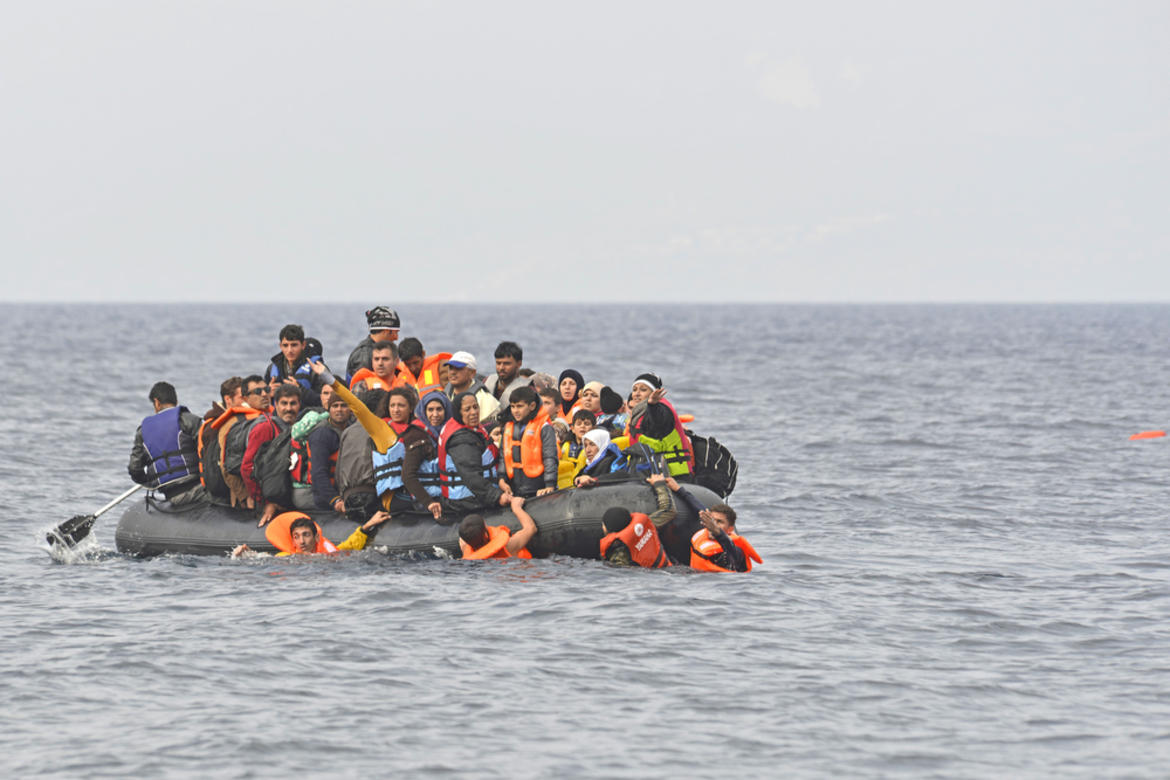 The end of 2021 also marked the end of the EU’s emergency trust fund for Africa. Together with other outlets in the European Data Journalism Network, under the direction of Deutsche Welle , we have used the available data to reconstruct the ways in which the funds were used.

It emerges that a large proportion of funding was dedicated to controlling Europe’s external borders and conditional aid policies. The EU’s border externalisation strategy has come to define its approach to international cooperation, and the Italian contribution to EUTF in Libya is a particularly instructive example.

What is the EUTF

The EUTF (EU Trust Fund) is a trust fund established by the European Commission with 25 member states as well as Norway and Switzerland with the declared aim of helping to stabilise the African continent and deal with the causes of irregular migration and displacement.

The fund was created at a time when Europe was facing a consistent influx of migrants from Africa. More specifically, it was introduced during the migration summit held in Malta in 2015, attended by EU heads of state as well as those from the African countries most affected by the situation. The plan was then carried out, until it finished at the end of 2021.

The fund was conceived as a concrete solution regarding the European Agenda on Migration , also from 2015, which identified four pillars for successfully managing migration:

According to the sums of allocated funds, Italy was one of the main contributors to this project, second only to Germany.

The total budget, which started at 1.9 billion euro in 2015, eventually surpassed 5 billion over the following six years.

Thanks to these funds, more than 250 projects were initiated - though some are yet to be completed. Of these projects, 193 were launched in a single country (71 percent of the total budget), while 48 were spread over several countries (27 percent of the budget) and 12 did not specify a location.

Where did the money go?

While the EUTF was created for Africa, not every African country received equal funding.

Projects were specifically focused on three investment areas: the Horn of Africa (including Burkina Faso, Cameroon, Chad, Côte d'Ivoire, Gambia, Ghana, Guinea, Mali, Mauritania, Niger, Nigeria and Senegal), the Sahel and Chad regions (specifically Djibouti, Eritrea, Ethiopia, Kenya, Somalia, South Sudan, Sudan, Tanzania and Uganda), and North Africa (Algeria, Egypt, Libya, Morocco and Tunisia). The first area received the largest share of funding, 43 percent of the total, the second 38 percent, and the third 16 percent.
The individual countries receiving the largest shares of funds were Sudan, Somalia and Libya. However, it should be noted that Niger rises to second place if we consider the number of projects rather than the allocated sums of money.

Sudan alone received about 9 percent of all allocated funds from the EUTF. Somalia is next, with 8.6 percent, then Libya (7.3 percent).

What was the money invested in?

The EUTF projects, which can be viewed here , were classified by thematic areas, divided into four broad sectors:

This last thematic area in particular played an important role, and received the largest share of funds (about a quarter of the total). It was followed by improving governance and conflict prevention (20 percent) and strengthening resilience (17.1 percent).

According to estimates from the organisations Cini and Concord in their report "Partnership or conditional aid?", when we take these variables into account it emerges that almost half of all EUTF funding was spent on the management of migration flows to Europe.

But what exactly does “managing migration flows” mean?

According to the stated aims of the EUTF , it involves a cluster of activities such as offering support to local migration institutions, improving the capacity to prevent irregular migration, or combating human trafficking. It also includes creating concrete opportunities for voluntary return and reintegration in the country of origin.

In short, the strategy was designed to prevent migration towards Europe by creating more opportunities, but also by strengthening border control. Stemming upstream flows has thus been part of the EU's anti-migration strategy - a strategy of externalising borders - for several years. Despite the repeated implementation of this solution, it ultimately appearts rather myopic: it fails to properly address the real causes of migration, or guarantee a sustainable approach that respects human rights. Moreover, it takes place at the expense of greater investment in essential services such as health and education in the countries benefiting from cooperation policies. This would represent a genuine step towards reducing migration flows by improving people's living conditions in their countries of origin, besides being the real reasons that move or should move official development aid.

European actions financed by the EUTF for this specific purpose have focused on a few key countries. Not surprisingly, almost all of them are in North Africa, a key transit point for migrants wishing to travel to Europe.

The remaining three projects, however, have no explicit purpose, and the EUTF website itself reports that all projects in Libya were structured around the migration issue.

Libya, one of the main beneficiaries

In total, 26 African countries have benefited from European funds. Some, as we have seen, have received greater shares of funds for a variety of reasons.

Among these, Libya stands out, a country that has forged very close relations with Italy over the years and which, moreover, represents a fundamental transit point for the flow of migrants to the European nation. The central Mediterranean route passes through Libya and is one of the most important migratory routes, as well as one of the most dangerous .

The situation is further aggravated by the fact that, politically, Libya is a highly unstable country, with a weak UN-recognised government controlling a tiny section, a number of active militias, and a de facto state of ongoing civil war. For migrants, it has proven to be a particularly dangerous country in which to stay or pass through, due to poor security and the presence of numerous detention centres where abuses are all too common.

The then UN High Commissioner for Human Rights felt compelled to express his outrage, stressing that the plight of migrants in Libyan detention centres could not be justified by the reduction of arrivals in Europe.

According to Cini and Concord, the decision to allocate such a high share of EUTF funds to Libya should also be understood in the light of the EU's often implemented policy of "more for more, less for less", meaning a more consistent allocation of funds for countries that are more committed to migration management. This is a way to "reward" states that help Europe defend its external borders, exploiting the resources of international cooperation for political ends.

Of these, almost 310 were invested in migration management projects, despite the fact that Libya is a country plagued by conflict and humanitarian crises, that would clearly benefit from other types of economic aid.

The role of Italy in Libya

The Italian contribution was important in this respect. Ten Italian organisations, including public institutions and NGOs, participated in the EUTF as implementing bodies.

In addition to these, a fourth project was implemented entirely by the Ministry of the Interior. This is a project with a total cost of 42.2 million euro, with additional co-financing of another 4 million. The stated aim of the project is to improve the ability of Libyans to control their borders.

The objectives were divided under the following sections:

Thus, a series of objectives aimed at increasing control along the country's borders and enhancing the capacity to manage emergencies at sea (i.e. to bring migrants back to unsafe ports).

This strategy has been criticised by Oxfam , Amnesty International , Cini and Concord, among others, and confirms a trend that has consolidated in recent years, which we have discussed in numerous in-depth articles. In recent years, Italy has developed collaborative relations with Libya. Starting with the Italy-Libya memorandum of understanding signed in 2017 by the then Minister of the Interior Marco Minniti and renewed in 2020, with the explicit aim of keeping migrants outside Italian borders. This is despite the fact that the North African country has recorded numerous cases of abuse, arbitrary detention, torture, exploitation and extortion of migrants.

A security-oriented approach has also characterised the international missions in which Italy has been involved, many of which have concerned Libya, and always with a view to managing migratory flows.

Currently, the strategy seems to have remained unchanged, and Italy has yet to develop appropriate humanitarian corridors. Instead of working on long-term solutions like the rest of Europe, Italy has preferred to invest millions of euros in outsourcing its borders. This is again all too clear from the political choices driving the Africa Trust Fund.

The EUTF was an opportunity to contribute to the development and improvement of conditions in a continent plagued by conflict, natural disasters and instability. Such action would also have been more likely to reduce migration flows. Instead, it became an opportunity to tighten access and exclude migrants without offering alternative solutions - distorting the actual purpose of public development funds.