Germany is the biggest state donor to the European Union's Emergency Trust Fund for Africa, which was established in 2015 to curb irregular migration to the EU. Where did that money go? And what comes next? 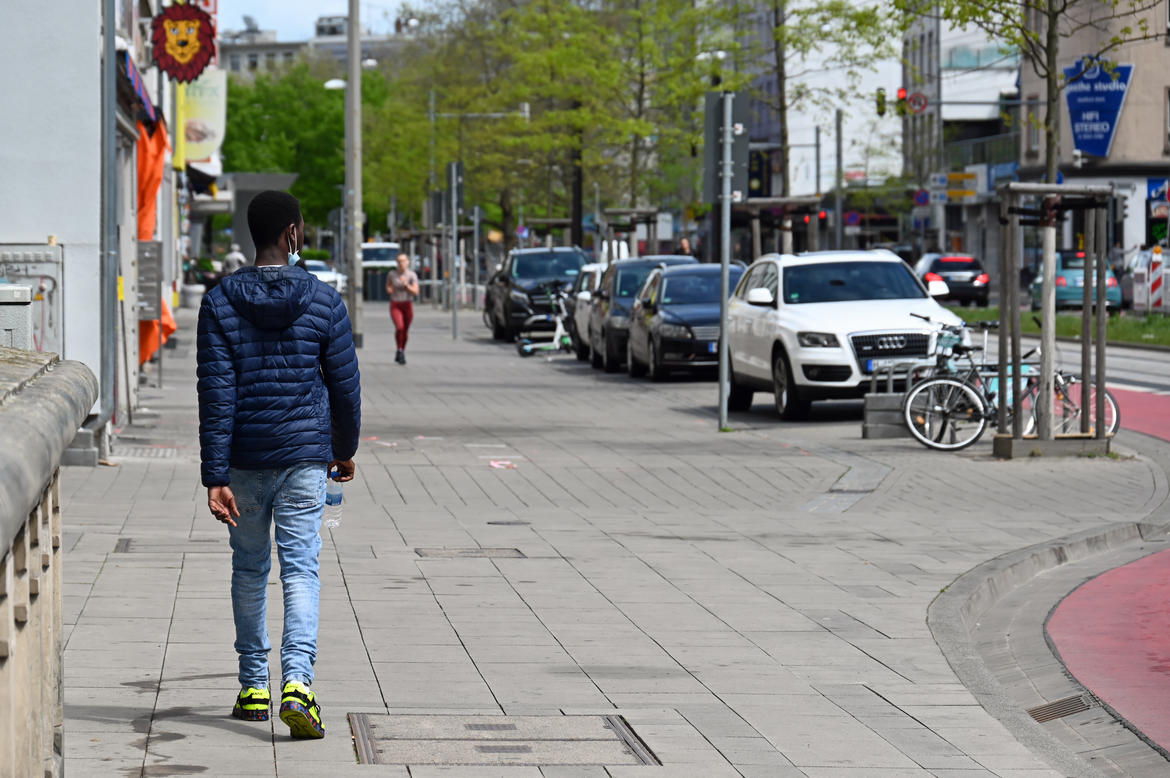 By the end of 2015, EU policymakers and officials from member states were eager to prevent a repeat of the large numbers of migrants who reached the European Union that year. A consensus emerged that the European Union would have to work to create and increase opportunities in migrants' countries of origin, said Udo Bullmann, a German Social Democrat and a member of the European Parliament's Committee on Development. "There was an awareness that something collectively had to be done," Bullmann said, "especially in Africa."

One result of the ensuing negotiations was the EU Emergency Trust Fund (EUTF) for Africa: Roughly €5 billion in "emergency" project funding — mostly redirected from existing development funds. Its purpose was to dispense money quickly to "address root causes of irregular migration" in the recipient countries.

Almost a quarter of the EUTF budget comes from Germany

The fund has been criticized by researchers and policymakers for using development funding to further EU members' internal policy agendas, for seeking quick fixes to long-term issues, and for prioritizing migration control over, for example, free movement and legal migration programs.

As the European Union's largest economy, Germany is the biggest state donor to the EUTF. From 2016 through 2021, it committed about €316 million in state funding from the Development and Foreign ministries. And Germany is also the biggest contributor to the general EU budget and the European Development Fund, which provided the lion's share of the EUTF's budget. Together, almost a quarter of the EUTF comes, directly or indirectly, from the German government. 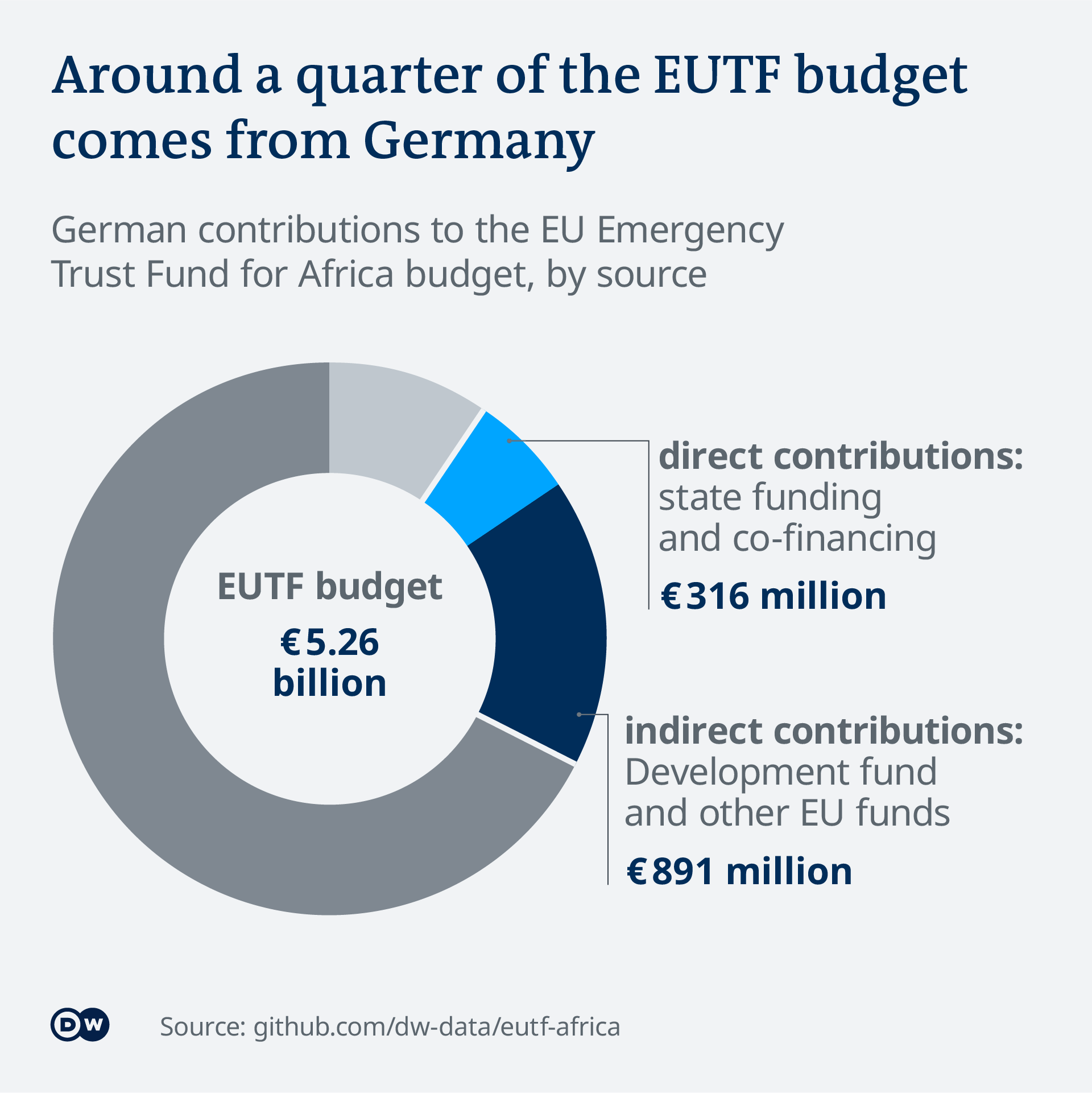 The Development Ministry referred questions about the EUTF to the Foreign Ministry. The Foreign Ministry cited the German government's priorities within the EUTF as "support for the voluntary return and reintegration of migrants," support for "communities along migratory routes" and "measures to prevent extremism."

Some international observers say Germany places a greater focus on development than other EU member states do. "The Development Ministry had an interest in making sure that development aid funds wouldn't be instrumentalized," said Davip Kipp, who researches migration at the German Institute for International and Security Affairs. Kipp said development actors in Germany generally wanted to avoid the possibility that funds might become a bargaining chip to get partner countries to cooperate on, for example, return programs or similar EU policy interests.

Using EU funds as leverage to get African governments to cooperate on migration does indeed seem to be part of the wider strategy. For one example, the European Union stopped approving EUTF projects in Ethiopia in 2017 until the government agreed to take back deported citizens more quickly. A study by the German Development Institute suggests that this is particularly the case in West Africa, where EU programs tend to hinder free movement even within the region. On the Horn of Africa, in contrast, EU interventions tend to support programs that allow people to move freely within the region.

Many EUTF projects are awarded to intergovernmental organizations such as the International Organization for Migration and the UN High Commissioner for Refugees, which are responsible for implementing projects on the ground. The other big players are national development agencies — chief among them the German Corporation for International Cooperation (GIZ). The state-owned nonprofit agency, connected to the Development and Economic Cooperation Ministry, has increasingly worked with EU funding in recent years. It participated in EUTF projects with a total budget of over €800 million, more than any other implementing organization. 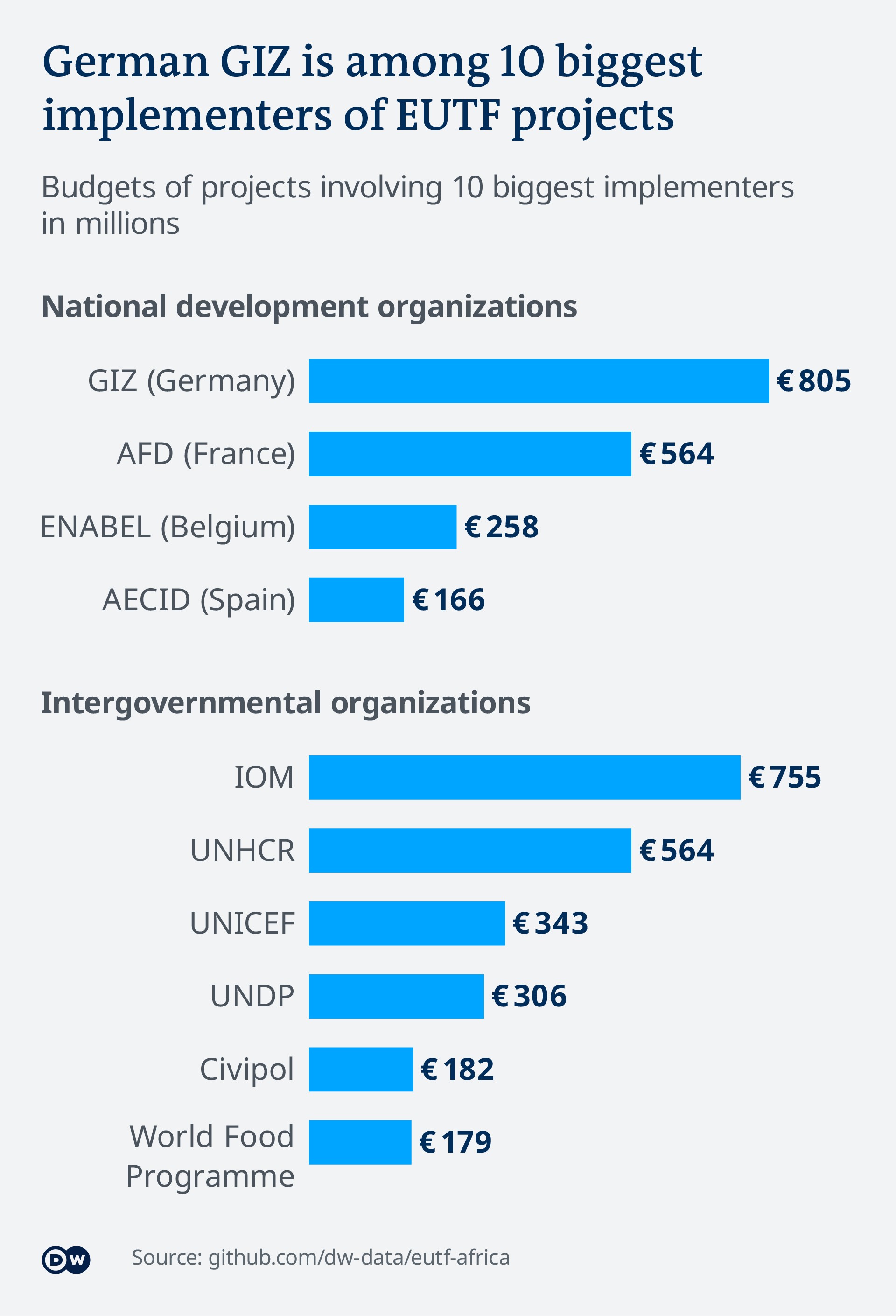 It is practical for the European Union to rely on larger, better-known institutions such as GIZ to implement projects. "These are big machineries," Bullmann said, "very close to the respective ministries." This allows the ministries to keep a close eye on the projects, he said, and ensures that the implementers can satisfy the projects' demands. But it also means that a few agencies in the European Union are responsible for organizing most of the EU-funded projects in third countries.

"From a sustainable development perspective, you need to embed projects locally to achieve anything in the long run," Bullmann said. The challenge, he added, is for bigger foreign agencies to work with domestic actors, who will be more embedded in and sensitive to the culture, needs and challenges of the partner countries.

Projects with German participation, mainly through GIZ, focus more on the Sahel window of the EUTF, covering 12 West African countries, from Chad to Senegal. Fifty percent of the budget for projects with German participation goes there. German organizations also participate more in projects in North Africa — in Libya, Morocco or Egypt, for example — but are less active on the Horn of Africa. 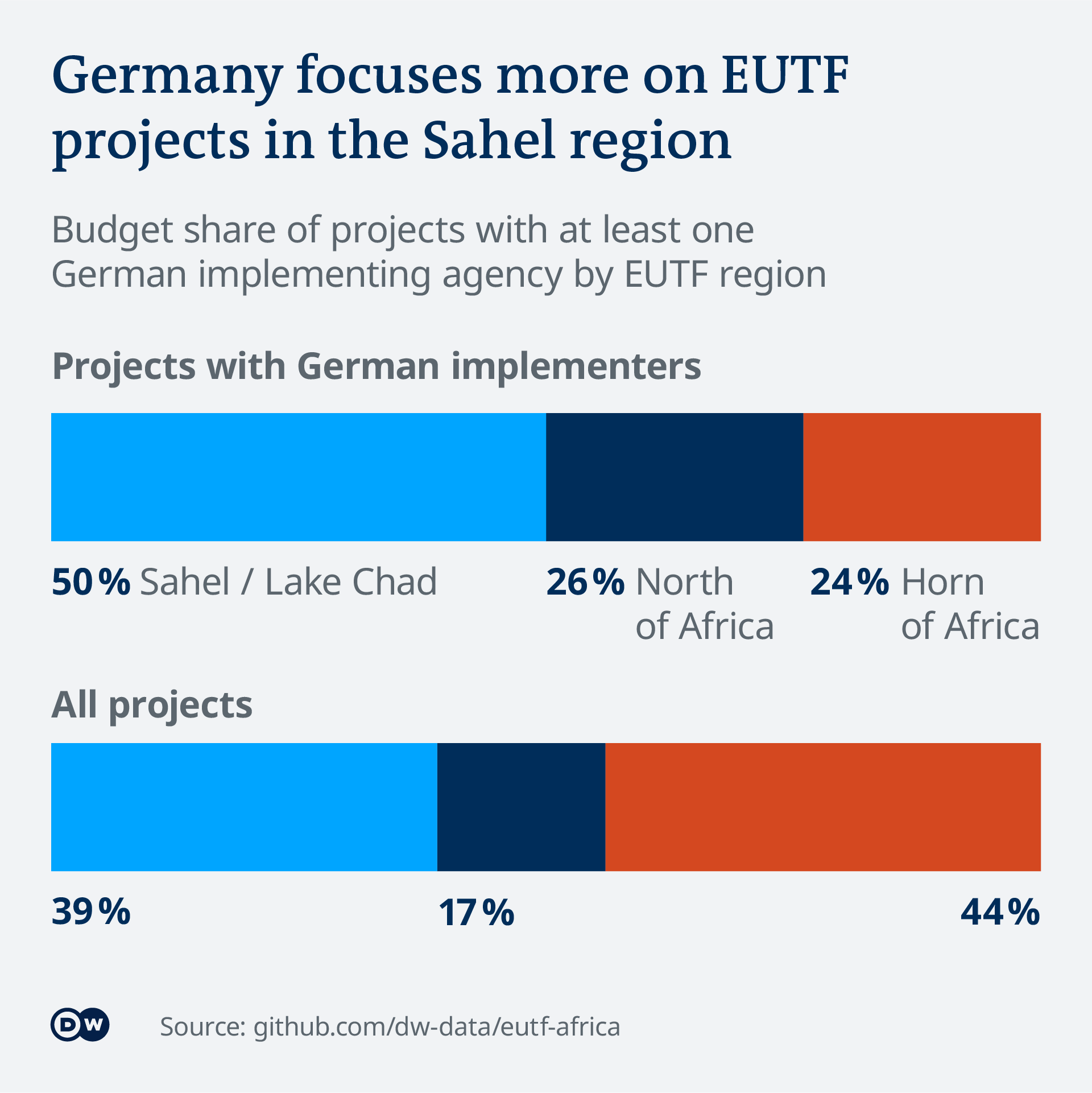 GIZ has worked on several migration management projects in North Africa — mostly in cooperation with other development organizations. One example is a project to manage mixed migration flows in Libya , which includes collecting data on migration routes, working with detention centers and Libyan authorities to improve conditions for migrants, and creating jobs and providing basic services in the surrounding areas. GIZ mostly covered the latter aspects, with multiple UN agencies involved in the other areas.

EUTF-funded GIZ projects in the Sahel region, such as the "Building a Future — Make It in The Gambia " project, focus more on creating employment opportunities and general economic support. These are more classic development aid projects, with the project pitch geared slightly toward the EUTF focus on migration. Building a Future, for example, cites as its target group "Gambia's youth, including returning and/or potential migrants."

At the end of 2021, the EUTF stopped accepting new projects. In its new financial framework, the European Union will combine its development financing instruments, including the EUTF, into one €80 billion fund, 10% of which is to be spent on migration-related programs. Its aim is to combine efforts by the European Union and its member states more effectively. Kipp called this a welcome development — "as long as the focus is not only on the negative effects of migration." Unfortunately, he said, it looks like many EU member states are focusing on that.

"The proposals by the French EU Council presidency seem to view external funding as merely a vehicle for migrant return policies," Kipp said. "That can't be in the interest of the new German federal government."

Russia's invasion of Ukraine means that hundreds of thousands of displaced people are again applying for asylum in the European Union. The EU budget will be adjusted accordingly, with money likely to be diverted from other projects to increase security spending and help member states accommodate those fleeing the war. But, if recent history is any indication, Germany will have a prominent role in shaping the European Union's development policies in Africa in the coming years — whatever they turn out to be.

This project is a collaboration among several media outlets in the European Data Journalism Network. While DW was project lead, Voxeurop, Openpolis and OBCT were contributing partners.