EU development programs such as the Emergency Trust Fund for Africa prioritize curbing migration over fostering development, critics say. How does the EUTF square with the stated aims of the European Union's aid policies? 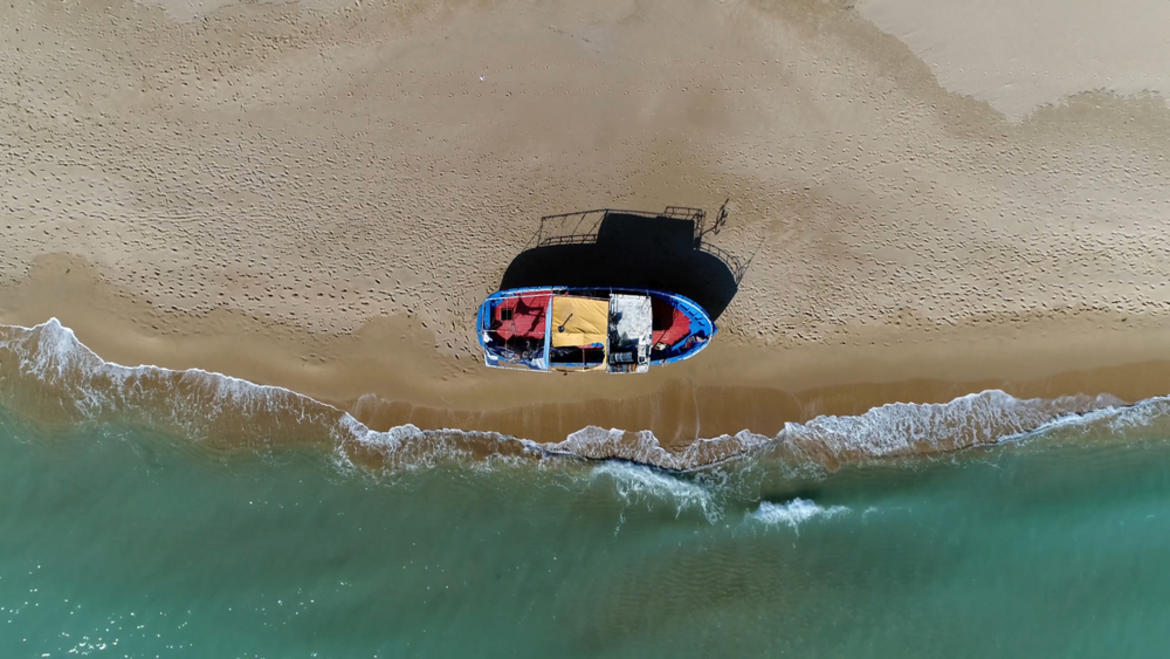 In raw numbers, the European Union and its members provide the most development aid in the world, around €75 billion in 2019 alone. About one-third of that aid currently goes to Africa. With historical inequalities keeping African nations at a disadvantage in negotiations, EU countries often use development funds as levers for their own political agendas. In recent years, migration control has been at the forefront of these efforts.

Africa has been the focus of Western European development policy since the precursors to the EU were established in the 1950s.

With large parts of Africa still colonized by the inheritor states of the European empires, structures such as the European Development Fund aimed to continue the development policies of the former empires, historian Sara Lorenzini said: "The idea was to build European-style welfare states in the colonies and for Europe to retain geopolitical weight as a third force during the Cold War."

As African nations started to gain independence in the 1960s, development policies allowed European countries to maintain their influence on the continent.

Political agendas continue to shape where aid goes — and which projects get prioritized. "The main agenda in Africa continues to be geopolitical," said Jan Orbie, the director of the Centre for EU Studies at Ghent University. "In the past 10 years, development policy has become more connected to migration, to energy policy, to trade."

Data on official development aid collected by the Organisation for Economic Co-operation and Development (OECD) shows, for example, that EU institutions and member states spend a lot more of their development aid north of the Sahara than other donors do — often in countries considered the origin or transit states for migrants who make their way to the European Union. 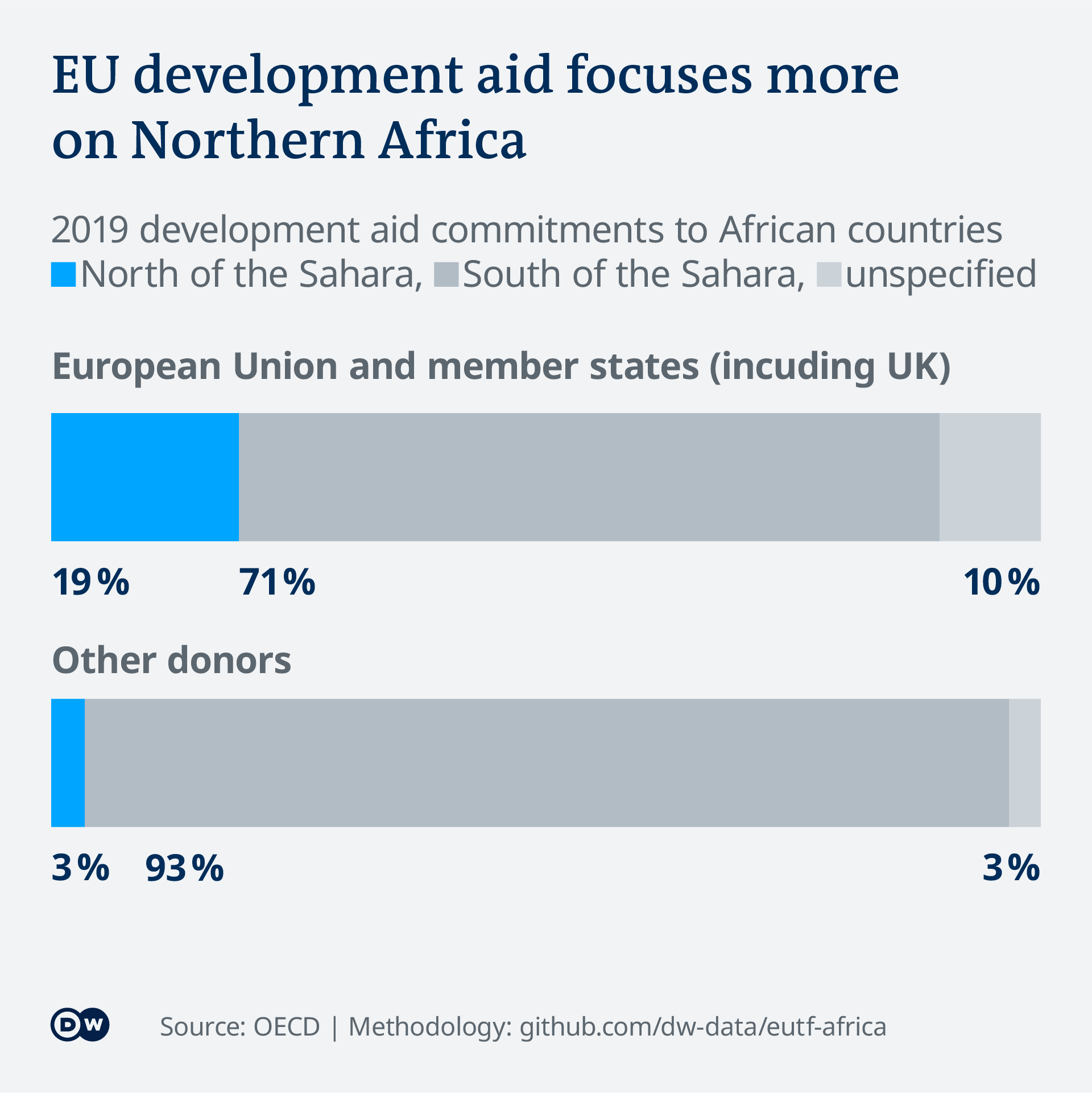 One instrument that exemplifies the European Union's focus on migration control is the EU Emergency Trust Fund for Africa, which just concluded its six-year funding period. After large numbers of irregular migrants reached the European Union in 2015, EU policymakers were eager to prevent a repeat. A result of the ensuing negotiations was the now roughly €5 billion in "emergency" project funding for the EUTF, largely redirected from existing development funds. Its purpose was to dispense money quickly — without much parliamentary oversight and the bureaucracy it would bring. "The trust fund illustrates that the EU can act very quickly, efficiently and cohesively when it wants to," Orbie said. "Whether that's a good thing is another question."

The funds are officially meant to "address root causes of irregular migration" in the recipient countries. But the priority of policymakers seems to be to prevent migrants from arriving at EU borders, as an Oxfam report found. In one board meeting , the head of the Directorate General for European Neighbourhood Policy and Enlargement Negotiations, Christian Danielsson, happily asserted how the EUTF for Africa had "confirmed its value in supporting an effective management of migration flows from, to and within" North Africa. 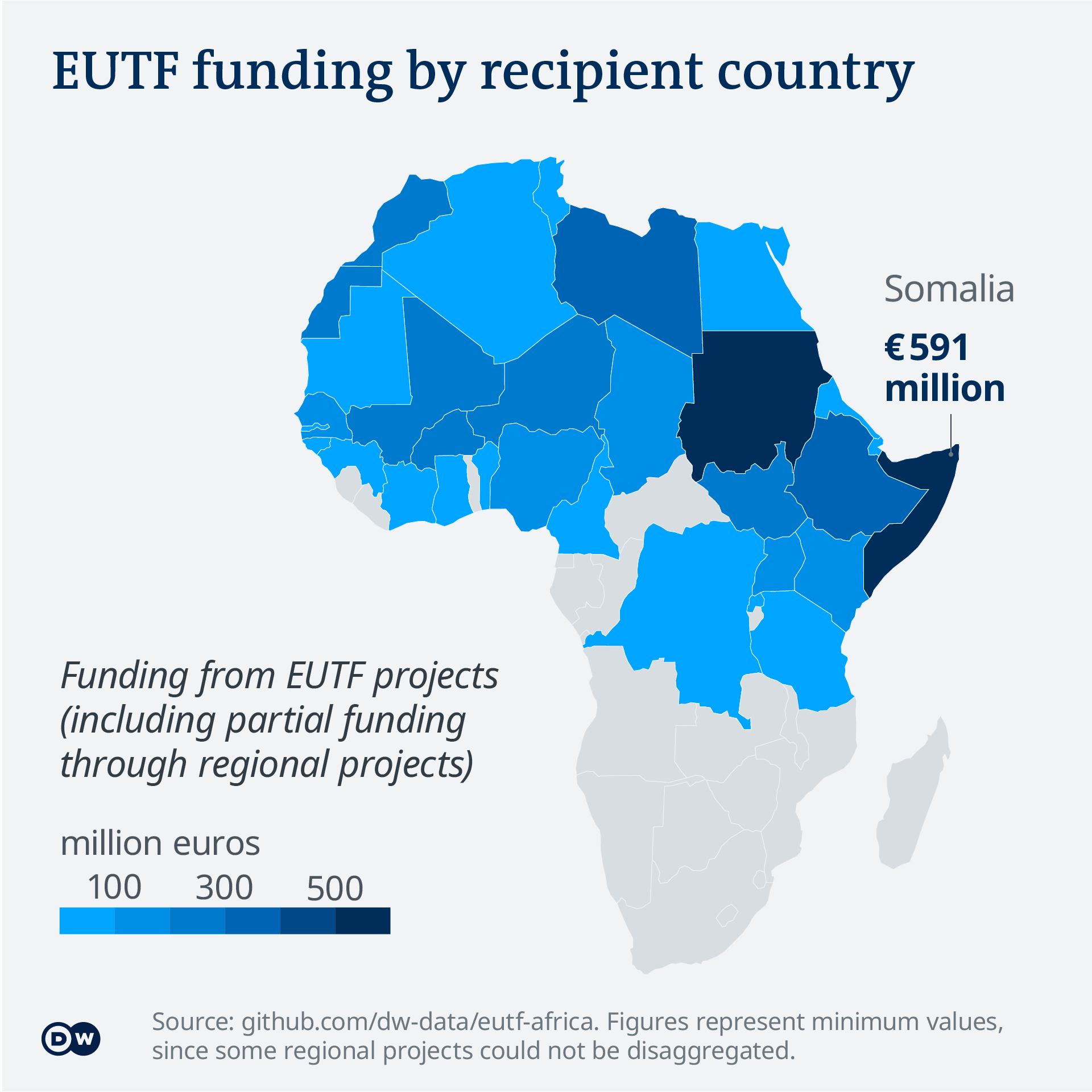 The Oxfam report also found that most of the funding in countries perceived as origins of migrants go to development cooperation projects, while transit countries receive more money for migration management projects. Only about 1% of the EUTF, €56 million, was spent on fostering legal pathways for African migrants.

The fund's total volume may not seem like much: €5 billion in funding commitments, spread over six years and about 30 recipient countries. Between 2016 and 2020, the time period for which the OECD provides complete data, official development aid donors committed over $1.7 trillion (€1.6 trillion) to these countries, with about one-third of that coming from the European Union and its member states. 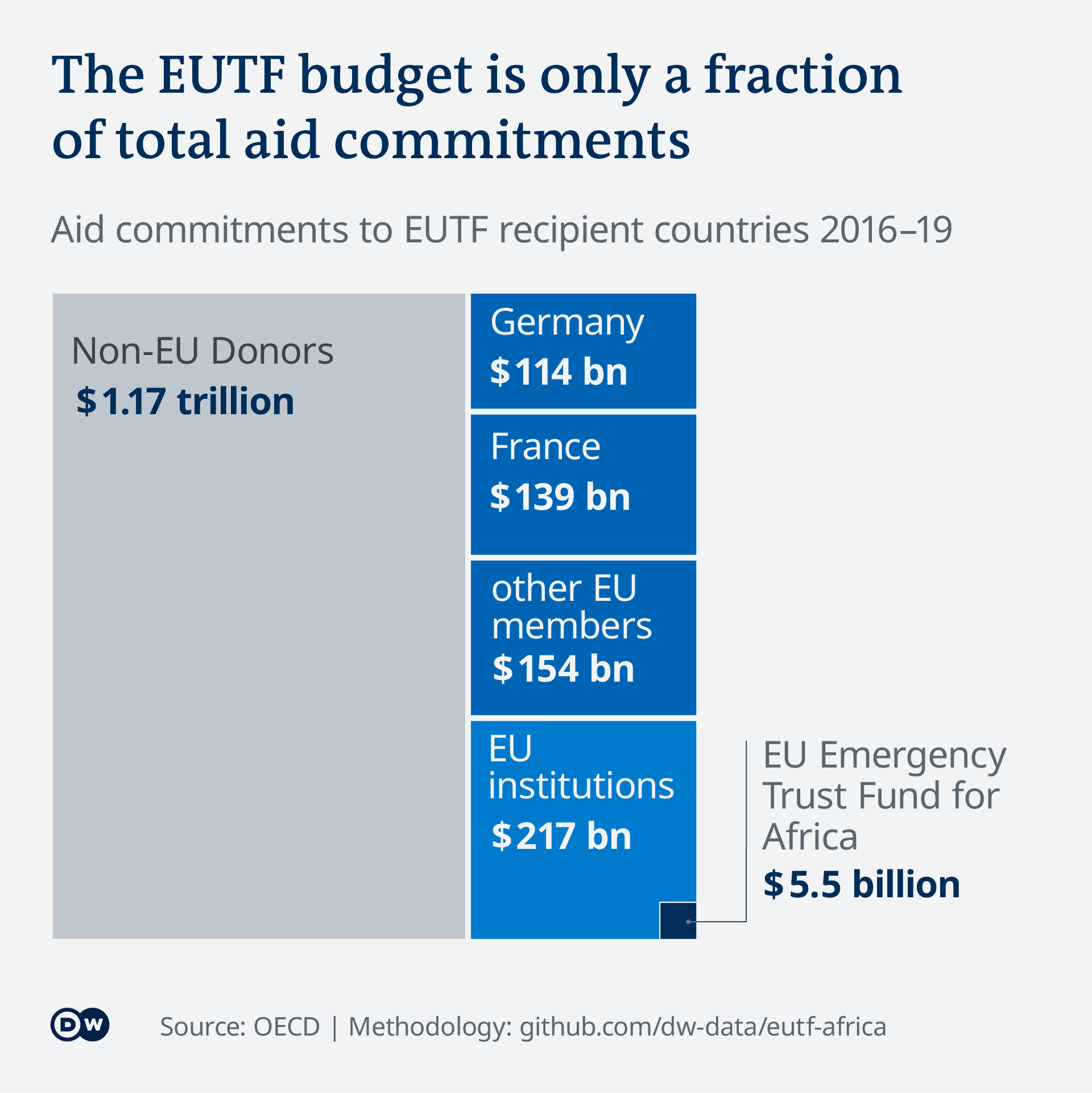 But the EUTF often goes hand in hand with other funds managed by the European Union and its member states — and the political interests behind them. Refusing to cooperate with one program might disadvantage recipient countries when it comes to future funding.

And the money from the EUTF still makes a difference in individual countries. The fund makes up more than a third of the total EU development money that goes to Sudan and Libya, which also receive among the highest absolute sums from the EUTF.

Even countries with more diverse funding sources can be susceptible to political pressure from the European Union. "African countries now have to negotiate about migration so that they can get aid, they can gain access to foreign currency and other diplomatic support," said Mehari Taddele Maru, a professor at the Migration Policy Centre and formerly the program coordinator for migration at the African Union Commission.

In 2017, for example, the European Union negotiated a deal with Ethiopia to accelerate the return of nationals deported from EU countries, voluntarily or involuntarily. The European Council attributes Ethiopia's cooperation to "the financial instruments ... in particular the EU Trust Fund." Records on EUTF projects show that Ethiopia was allocated funding at first in December 2016. Then funding flows stopped for almost the entire year of 2017. Days after the agreement had been reached, €14 million in EUTF funding for "stimulating economic opportunities and job creation for refugees and host communities in Ethiopia" was approved. The country has now received more than €300 million from the fund.

"The government was cash-starved, so they agreed," Mehari said. "The same with Niger, Nigeria and others: The hardening of borders is happening in Africa because of European intervention."

A study by the German Development Institute suggests that this is particularly the case in West Africa, where EU programming tends to hinder free movement — even within the region. On the Horn of Africa, in contrast, EU interventions tend to support projects that allow people to move freely within the region.

From 'emergency' to steady flows: The future of EU aid spending on migration

At the end of 2021, the EUTF for Africa stopped accepting new projects. And the European Union is restructuring its development spending . A range of schemes, including the EUTF, will now be combined in one big fund: the Neighbourhood, Development and International Cooperation Instrument (NDICI) . 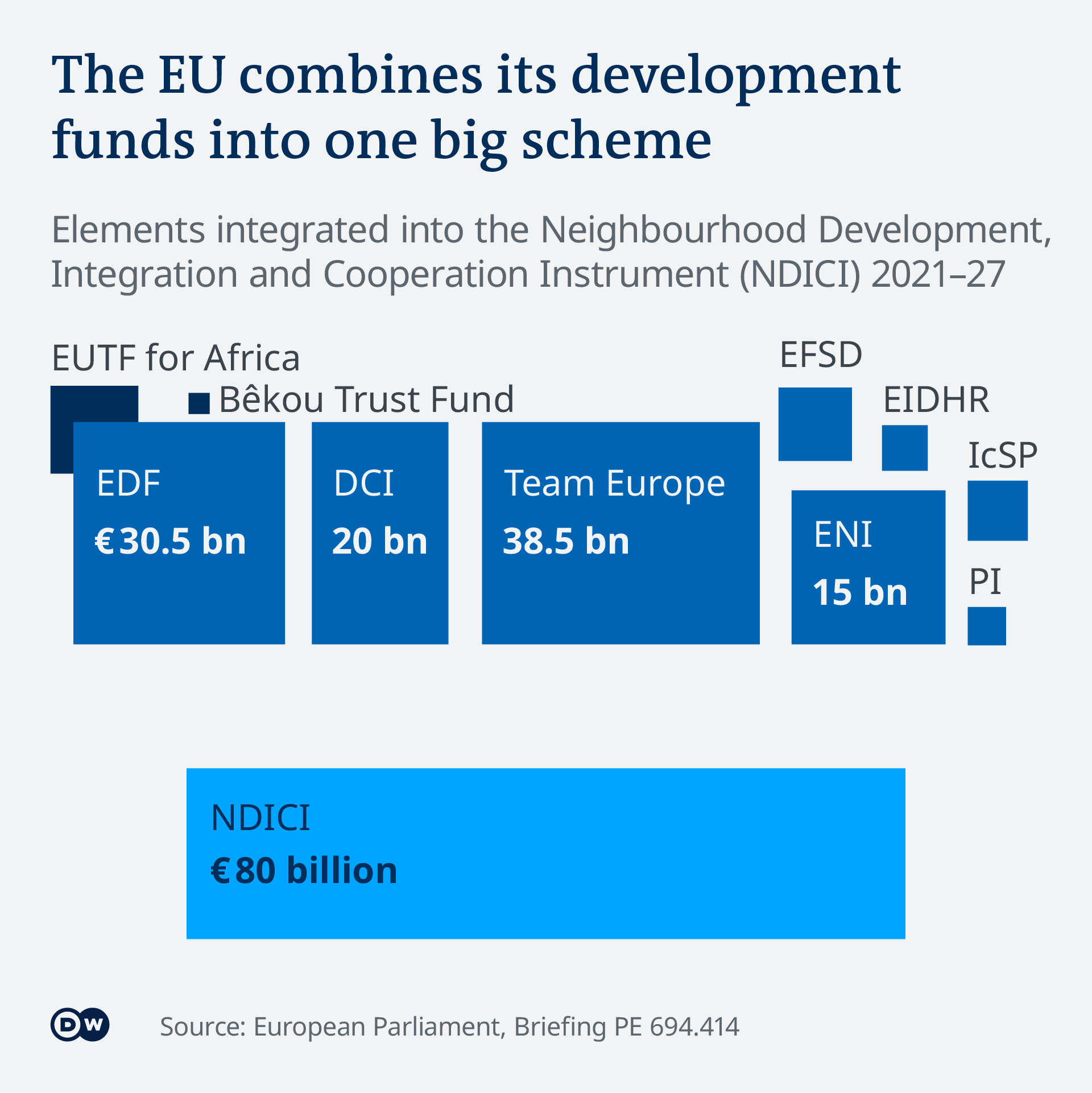 It spans €80 billion for the funding period from 2021 to 2027, 10% of which is designated for migration-management programs. "There were political objectives to have a prominent figure and a clear focus on migration governance," said Anna Knoll, the head of the migration program at the European think tank ECDPM. The acute feeling of emergency guiding EU policymakers in 2015 has passed, but Knoll said the NDICI would likely continue some of the current trends: The European Union retains a strong focus on controlling migration, and it continues to use aid funds as a tool to further EU interests in Africa.

This project is a collaboration among several media outlets in the European Data Journalism Network. While DW was project lead, Voxeurop, Openpolis and OBCT were contributing partners.