How the EU spent billions to halt migration from Africa 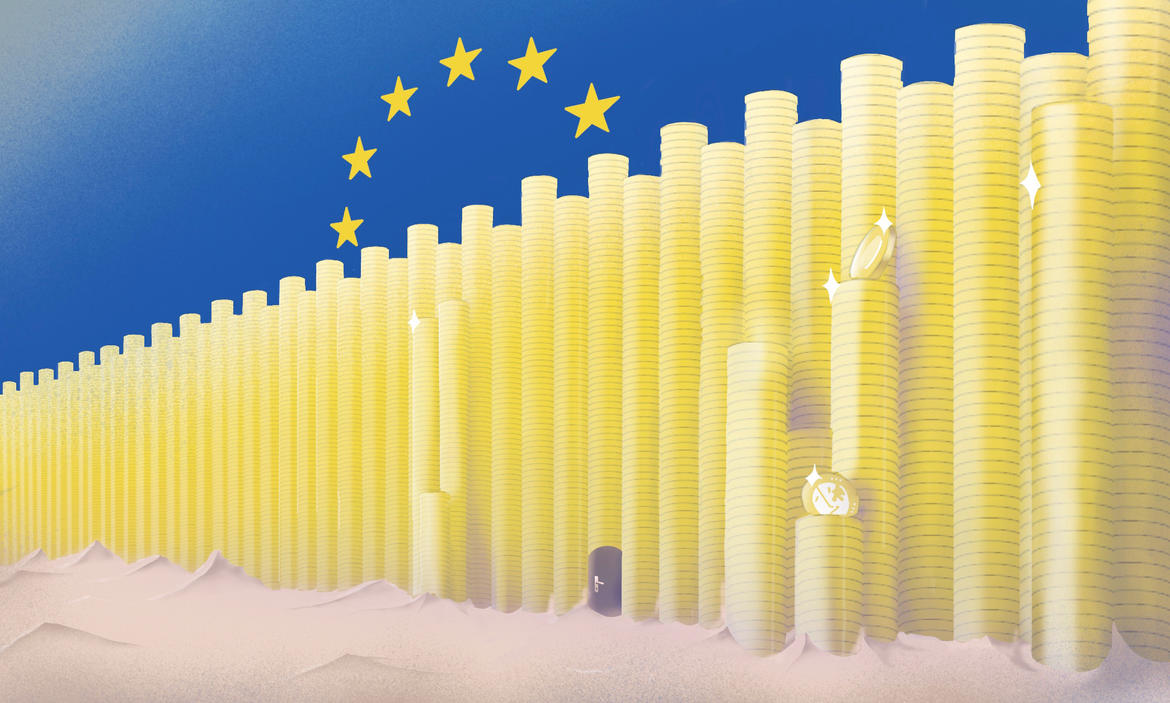 Faced with hundreds of thousands of refugees arriving to EU countries in 2015, policymakers from member states felt the pressure to react quickly and demonstratively. Convening with the leaders of several African countries in the Maltese capital, Valletta, they decided to fill a pot of money. This money was not dedicated to helping integrate the thousands of people who had arrived to the European Union. Instead, the so-called EU Emergency Trust Fund for Africa (EUTF) was supposed to "address the root causes of irregular migration" so that fewer Africans might try to make their — often dangerous — way to Europe.

Was this goal reached six years and €5 billion later? Together with partner newsrooms within the European Data Journalism Network, DW is taking stock of the EUTF. More than 250 projects were initiated through the official end of the project assignment phase in December 2021, and many of them are still up and running, with the peak disbursement of EUTF funds occurring in summer 2020. With the Neighbourhood, Development and International Cooperation Instrument (NDICI) already set up as the next tool — and with €8 billion ($9 billion) likely to be allocated to migration management efforts — it is worth looking at the data available.

The EUTF had several objectives that had been presented as equal in the initial documents : addressing the root causes of irregular migration, preventing and fighting smuggling and trafficking, strengthening protection for people fleeing their homes, improving cooperation on return and reintegration, and advancing the possibilities for legal migration.

The money was not allocated equally toward those objectives. Though a state-of-play-document from February 2018 stated that the "bulk of its resources are dedicated to the creation of jobs and (e)conomic (d)evelopment" only 10% of the funds were allocated to this goal.

The objective of investing primarily in job creation changed only two months later, at an April 2018 meeting of the EUTF's Strategic Board. According to the official minutes , Chair Stefano Manservisi — who at the time was head of the European Commission's Directorate General for International Cooperation and Development — said a lack of resources had made it necessary to further prioritize existing proposals and focus on "return and reintegration," "refugees management," "securitization of documents and civil registry," "anti-trafficking," "essential stabilization efforts in Somalia, Sudan, South Sudan and the Sahel if resources are available," and "migration dialogues."

So it comes as no surprise that almost a quarter of the funds — the largest share — went into migration management. 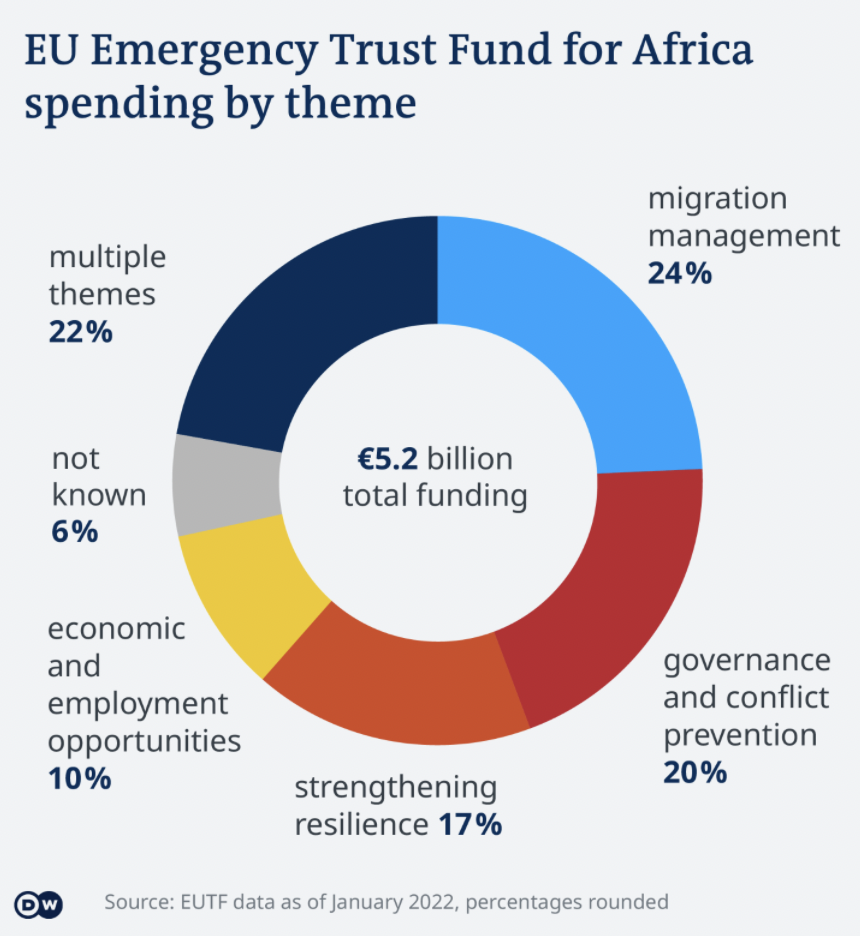 It is important to keep in mind that the majority of Africans who leave their homes — voluntarily or forced — seek to move to neighboring countries and regions within Africa. In 2020, for example, 80% of African migrants did not leave the continent, according to a policy brief by the Institute for Security Studies.

Despite the stated goal of improving the conditions that cause Africans to migrate irregularly via dangerous routes, the EUTF "had to do more with Europe than with Africa, because for Austria to host 40,000 irregular migrants is more worrisome than for Uganda to host 1.3 million refugees," Mehari Taddele Maru, a professor at the Migration Policy Centre and formerly the program coordinator for migration at the African Union Commission.

Several of the experts DW spoke with noted that the EU’s focus on irregular migration would not necessarily be the most important aspect on the topic of migration for African policymakers.

"A large portion of movements in the past used to happen through legal pathways because of the colonial history — so, for example, from Nigeria to the UK, or from Francophone countries to France or Belgium, or to the Middle East due to geographic proximity and religious rituals," Mehari said.

Though an initial stated intent of the EUTF was to also support more legal pathways for Africans to EU countries, the fund ultimately focused mainly on irregular migration . Instead of providing more legal visa opportunities, for example, the objective became to manage the flow of asylum-seekers, refugees, and people who don't have the necessary documents or permits to move or work in another country.

Fewer Africans on their way to Europe

The EU border agency, Frontex, has registered fewer irregular border crossings by African nationals since the EUTF was established in 2015, and Africans have filed fewer applications for asylum in EU member states. 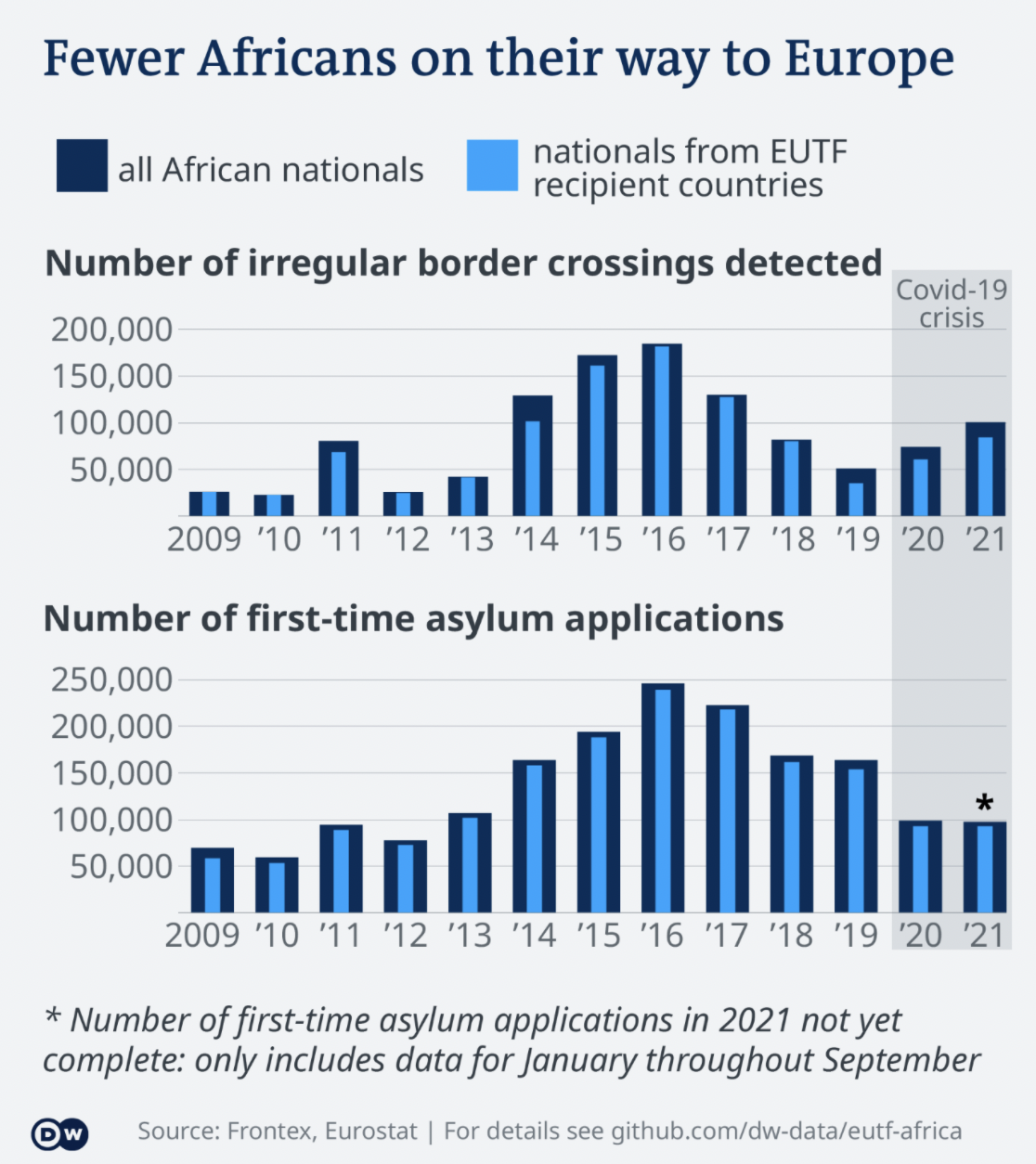 The observed decrease in crossings and applications by citizens of EUTF recipient countries tracked with similar drops in numbers for citizens of all African countries, implying that, overall, the EUTF did not have a measurable impact on migratory movements toward the European Union on this scale.

Though fewer Africans made their way to the European Union, people across the continent continued to leave their homes in increasingly larger numbers. According to the UN Refugee Agency (UNHCR), the number of Africans who left — or fled — their homes and became internally displaced or refugees in other African countries almost doubled from 2015 to 2020. 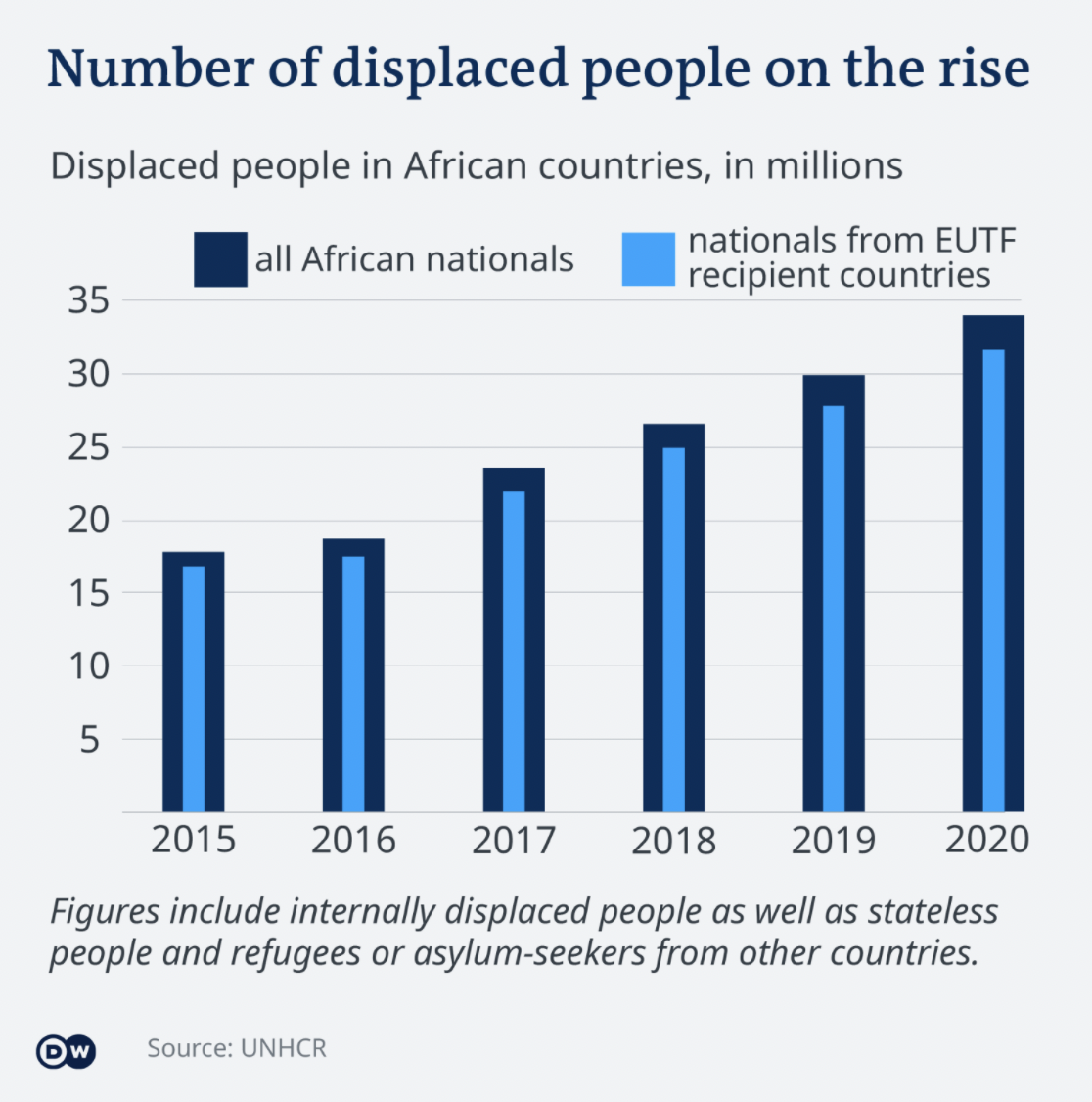 "The individual reasons for people moving differ, as do their specific motivations," said Ottilia Anna Maunganidze, who specializes in human security, international law and migration at the Institute for Security Studies and authored a 2021 policy brief on migration from Africa to Europe . "So dedicating any funds should always appreciate this and be tailored appropriately." Maunganidze said the EUTF rollout had done this in some cases, but not in all. In regions where the European Union has maintained a longer presence and relied on local expertise, the tailoring was more successful.

In the case of Niger, Maunganidze said, the EUTF's approach even reinforced what it intended to fight. "Niger is one of the poorer countries on the African continent," she said.

"It's also the youngest, with the median age of just about 14 years of age. When thinking about interventions within Niger, focus really should be on questions of early childhood development, on questions of education, integration and community involvement. But, across the Sahel, the approach has been almost an externalized border policy of the European Union. The focus was on the movement itself and not what are the opportunities that people are not getting at home that result in this desire to move. Now, when you impose a heavily securitized migration-management approach that is intended to contain movement and they impact a local economy and local trade, such that they unfortunately have that unintended consequence of limiting local opportunities — pushing people out through irregular channels and dangerous migration routes."

People will still want to move, but, instead of being able to go through legal channels, they are forced to opt for being smuggled across the borders.

Maunganidze said the task went beyond taking different demographics into account. "A lot of the issues are structural and systemic and require a long-term engagement in the context to be able to address them," she said. "So it is not necessarily realistic to focus primarily on short-term wins. But, perhaps, if there's an adjustment in terms of implementation of projects, then maybe in the long term that could be realizable — but not at the scale of funds that the EUTF has had."

Measuring impact of EU funds on the ground

There have been attempts to address the systemic and structural issues. The highest-funded EUTF project, for example, focuses on "state building" in Somalia. The government has been supported with €107 million to reinforce institutions and expand social services, with the primary objective of increasing the trust of other states, potential creditors and the population in the government. According to the project's website , actionable results are two "strategies, laws, policies and plans developed and/or directly supported," as well as four "planning, monitoring, learning, data-collection and analysis systems set up, implemented and/or strengthened" with the funding so far.

Another example is a €54 million project in Sudan by the UN World Food Programme, which reportedly provided assistance related to nutrition and food security to 1.1 million people. For context: In 2020, a total of 9.6 million Sudanese people were experiencing severe food insecurity, according to the Food Security Information Network . Then there was a €47.7 million project in Ethiopia directed at building resilience and economic opportunities, which reports creating almost 11,000 jobs with EUTF funding. An absence of paid work is a chronic issue in Ethiopia, where 1.1 million people aged 15 or older were unemployed in 2020, according to estimates by the International Labour Organization.

Well-intended, but with the wrong framing

Because the EUTF was set up as an emergency tool to react to migration and assign projects quickly and flexibly, the fund was not necessarily envisioned as a long-term endeavor. Several observers told DW that the root causes of displacement and migration cannot adequately be addressed by an instrument designed to tackle problems in the short term.

"The EUTF went wrong with the root-causes approach, because of the narrative that it sets: this idea that, once we eradicate the root causes, people are going to stop moving," said Alia Fakhry, a migration researcher at the German Council for Foreign Relations. "Eradicating root causes is one thing, but conflicts and natural disaster will continue to push people away from their homes".

The NDICI, the follow-up to the EUTF, has a much wider scope. Ten percent of its budget is to be dedicated to migration, with a strict monitoring system in place, "but the idea of root causes seems kind of gone," Fakhry said. "Maybe that is where the attention and criticism the EUTF drew paid off."

This project is a collaboration among several media outlets in the European Data Journalism Network. While DW was project lead, Voxeurop, Openpolis and OBC Transeuropa were contributing partners.