Croatia: those who leave

While Croatia may be a paradise for tourism, actually living and working there is a lot more difficult. Croatian workers move abroad in large numbers: a phenomenon rooted in a combination of both long-term and short-term factors. An analysis. 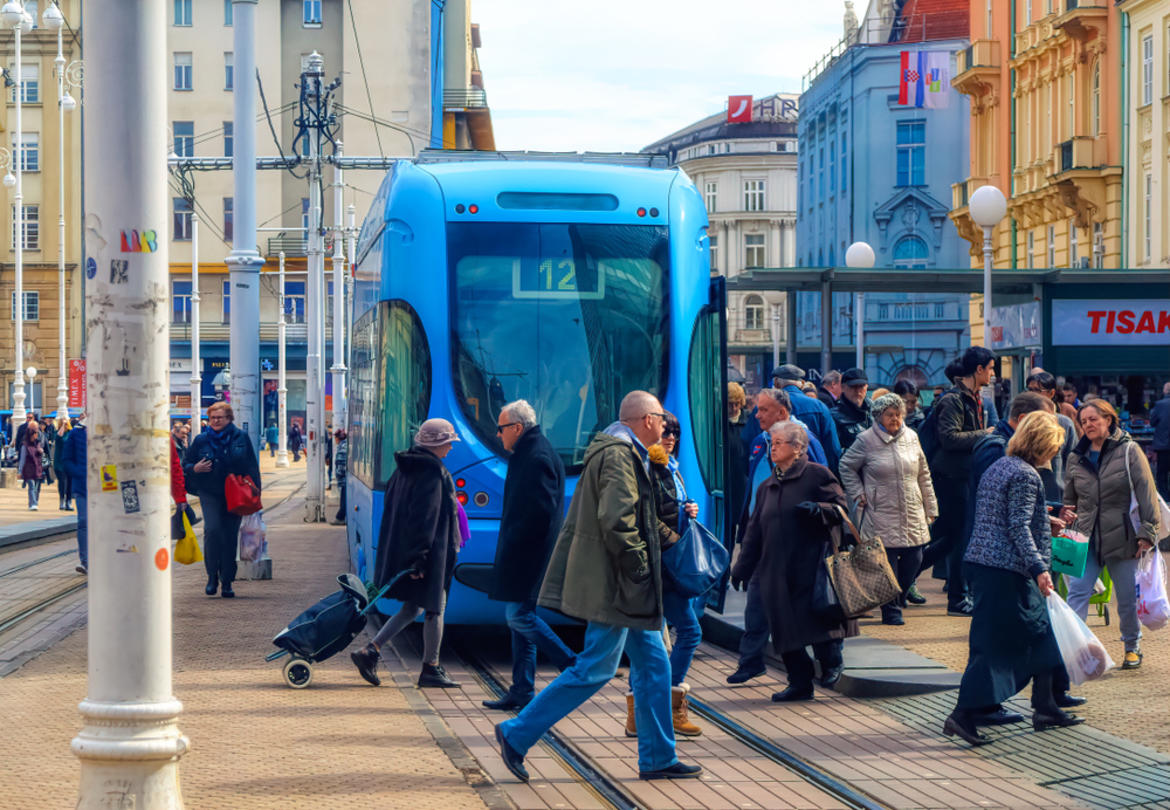 For many years now, emigration and depopulation have been competing for the front pages of Croatian newspapers, with frequent use of alarmist terms like “exodus” and “demographic catastrophe”. In any case, there are plenty of generally younger citizens who can testify to having left their native soil for northern Europe, trbuhom za kruh – a rather colourful expression which can be translated as “following the belly, in search of bread”.

President Kolinda Grabar Kitarović has spoken frequently about the demographic question, calling it a “vital question” and a “battle for existence”. To fight this battle, Grabar Kitarović has established a team of experts. The proposals put forward in 2018 involve some generic economic stimuli, tax cuts, public administration reform, incentives for childbirth, as well as the old dream of bringing the diaspora back home.

Recently, during a visit to Virovitica-Podravska, Grabar Kitarović again stressed the need for solutions to the demographic question, especially in the counties directly affected by “greater Serbian aggression”. These claims, deploying an expression already at the centre of arguments with Serbia, still conceal a shocking truth. Independent Croatia has lavished plenty of words on the areas which were on the front-line of the “patriotic war”, Lika and Slavonia especially, but has allowed them to die economically. In Lika, a mountainous region, the migratory tradition has been strong since the time of the Austro-Hungarian empire. Vukovar, on the other hand, in the centre of fertile Slavonia, used to be an immigration destination during socialist Yugoslavia, but has languished for two decades in a state of economic prostration and is quite literally emptying out. An initial analysis already illustrates how the emigration of Croatian workers is rooted in a combination of both long-term and short-term phenomena.

In 2013, Croatia joined the European Union at a time of profound economic crisis which caused a surge in unemployment, especially in 2013 and 2014 when it reached over 17 percent. Croatia’s entry to the European Union therefore became a driver for emigration. The numbers have become even greater since 2015, when Croatian workers began to enjoy full freedom of movement within the majority of EU countries, including Germany.

In this regard, Croatia is hardly unique, since mass emigration has characterised many other countries which recently joined the European Union.

Today, three Eastern European countries top the ranking of EU countries with the highest percentage of their workforces living abroad. In 2018, 21.3 percent of working age Romanians resided abroad. Romania is followed by Croatia (15.4 percent), Lithuania (14.5 percent), Portugal (13.6 percent) and Bulgaria (13.3 percent). It should be remembered here that mass emigration from Croatia had already begun in the 1990s. Meanwhile, estimates for the total number of Croatian citizens who have emigrated are still uncertain.

Nevertheless, the statistics probably fail to paint the full picture, given the difficulty in determining the genuine emigrants, especially when they still officially reside in Croatia. In some cases this is due to a desire to keep health insurance in Croatia, and benefit from health services which are considerably cheaper than in the countries to which Croatians tend to emigrate. This is testified by the fact that the total number of Croatians with insurance is around 200,000 more than that of actual inhabitants.

According to an investigation by newspaper Jutarnji list, which only counts Croatian citizens residing in their three main emigration destinations – Germany, Ireland and Austria – the numbers should be much higher : from 9007 in 2012, to 16,895 in 2013, 45,517 in 2014, 61,626 in 2015, 64,654 in 2016, and 66,201 in 2017. According to another study, Croatians living in other countries could represent a further 25 percent. Unsurprisingly, Germany takes the lion’s share, with 56,265 arrivals in 2017, followed at some distance by Austria and Ireland. While Austria and Germany are part of an historical migratory route, Ireland has only recently become a destination for migrants, with a peak in arrivals in 2016 .

The study by Ivana Draženović, Marina Kunovac and Dominik Pripužić, published at the end of 2018 but dealing with 2013-2016, estimates that 230,000 Croatians emigrated during this period.

The new emigration flows are characterised by a much younger average age (while in the previous decade the average age was 41.5, this figure dropped to 33.6 in 2016) and a much greater prevalence of minors.

Within these figures a distinction is also made between Croatians originating in Croatia and those who, while possessing a Croatian passport, come from other countries (Bosnia-Herzegovina in particular). In 2018, of the 57,724 Croatians arriving in Germany, 6,527 belonged to the second category . The migrants mostly come from regions with higher unemployment, such as Eastern and Central Croatia, Lika and Gorski Kotar. Nevertheless, migration also affects North-Western Croatia, and could increase further with the shipbuilding crisis .

From today’s perspective, it might be said that emigration has provided a release valve for unemployment: in 2019 unemployment was just over 7 percent, less than half the figure from five years ago.

Nevertheless, the emigration flows in recent years have already given rise to shortages in the local labour market . A chronic shortage in skilled workers has emerged in some economic sectors, with alarms being raised in the health sector especially. However, unskilled labour is also scarce: contrary to common opinion, the Croatian workers who emigrate generally have a lower level of education than those who remain in the country.

In the last few years, Croatia has opened its doors to ever greater quotas of foreign workers. Nevertheless, the area from which Croatia has historically drawn its labour – the ex-Jugoslav area – no longer seems capable of meeting its needs. In their turn, the workers coming from Bosnia-Herzegovina and Serbia are more tempted by destinations further afield, especially Germany, than by the Croatian labour market. Furthermore, the attack on seasonal Serbian workers last summer in Supetar on the island of Brač, driven by national issues, and the broader climate of intolerance towards the Serbian community, doesn’t help to make Croatia any more attractive to citizens of the neighbouring republic.

As a result, workers coming from the Far East , especially the Philippines, may not be the norm, but they certainly aren’t considered exotic in the Croatian hospitality sector. On the other hand, the thousands of refugees knocking at the country’s doors, arriving via the Balkan route, have never been considered a potential source of labour.

The quota for foreign workers in 2019 is 65,000, double the figure for the previous year, of which 15,600 work in the hospitality sector and 17,800 in construction. This, however, is still far from the real needs of the country. Furthermore, it appears that many international brokers exploited the quotas by sending non-European workers to Croatia and then transferring them shortly afterwards to other European countries.

As the quotas grow, so do appeals to pensioners. This spring, the Spar chain of supermarkets launched a campaign for recruiting pensioners who, in accordance with Croatian legislation, are permitted to work part-time, and supplement their small pensions .

In the final act of the tax reform instituted by Andrej Plenković’s centre-right government, substantial tax relief is offered to those returning to the workplace in order to combat the labour shortage. Furthermore, in the near future the return of many citizens is expected : those who went to Germany during Yugoslavia’s golden era of emigration, between 1968 and 1972, and who will soon retire.

So, Croatia is no country for the young?

Croatian indicators seem to demonstrate, more than anything, and amplified to the nth degree, a phenomenon which characterises all of Southern Europe. It is difficult to predict whether the emigration opportunities which opened up in recent years within the European Union will remain as such in the future, especially given the potential recession in Germany. More broadly, Croatia, like other neighbouring countries, will be doing well if it manages to offer good prospects to the working-age population: a decent quality of life, an efficient bureaucracy untainted by corruption, a reason to invest energy and hope in their country of origin. This is a challenge which must also be faced by Dubravka Šuica, the Croatian MEP recently elected vice-president of the European Commission, in charge of democracy and demography.