The migrant emergency and Ventimiglia

Ventimiglia has become a symbol of all the contradictions that migration towards the European Union has brought to light. Through an analysis of local media, an overview of the situation. 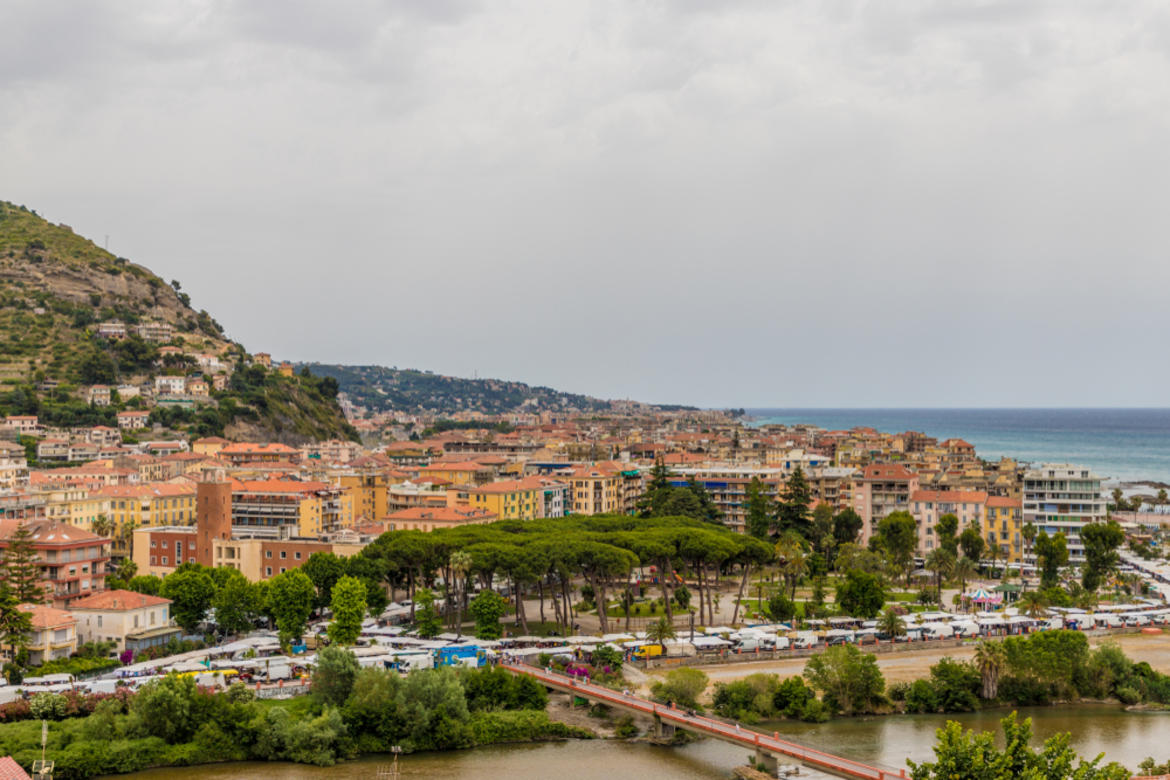 Ventimiglia is a small Ligurian municipality with little more than 20,000 inhabitants, situated along the coast, at the French-Italian border. The city — which had its local council dissolved in 2012 due to mafia infiltration, and has of late been suffering from socio-economic unrest — caught the attention of the national and international press when, beginning in spring 2015, a large number of migrants started trying to pass from Ventimiglia into France, in order to continue their journey.

The immigration narrative in the local press

Since the wave that hit Ventimiglia in summer 2015, migration has become one of the most covered topics in the local press. Specifically, a narrative in the key of emergency and security has been firmly established. For several days in the summer of 2015, and then in that of 2016, articles dealing with migration represented more than fifty percent of the total published articles. These figures dropped at the same time as the migratory flow, but still remained high. 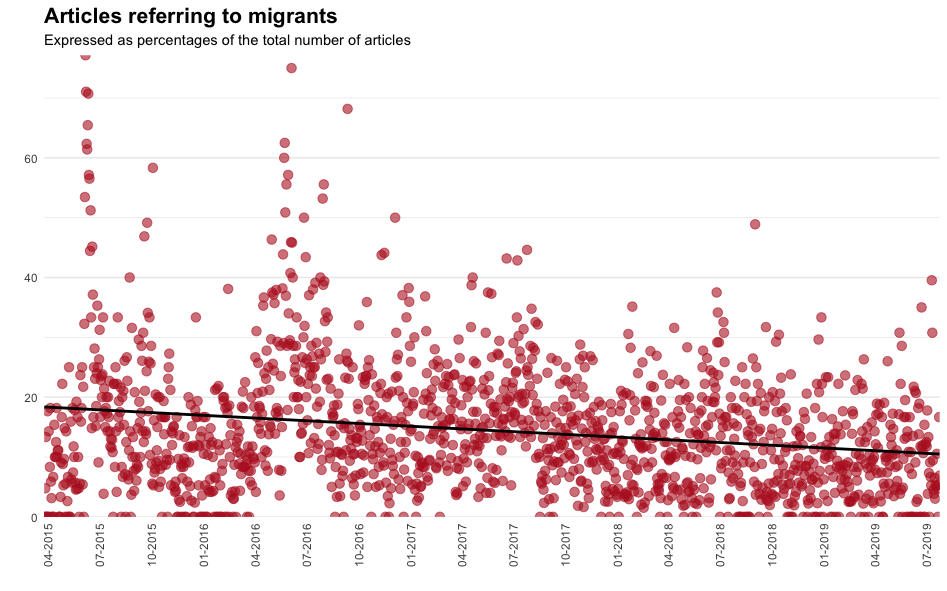 Analysing the quota of articles referring to migrants and migratory dynamics, we can see how the topics are discussed. Looking at certain keywords, it is possible to obtain the percentage frequency with which they appear in texts, and their development over time. 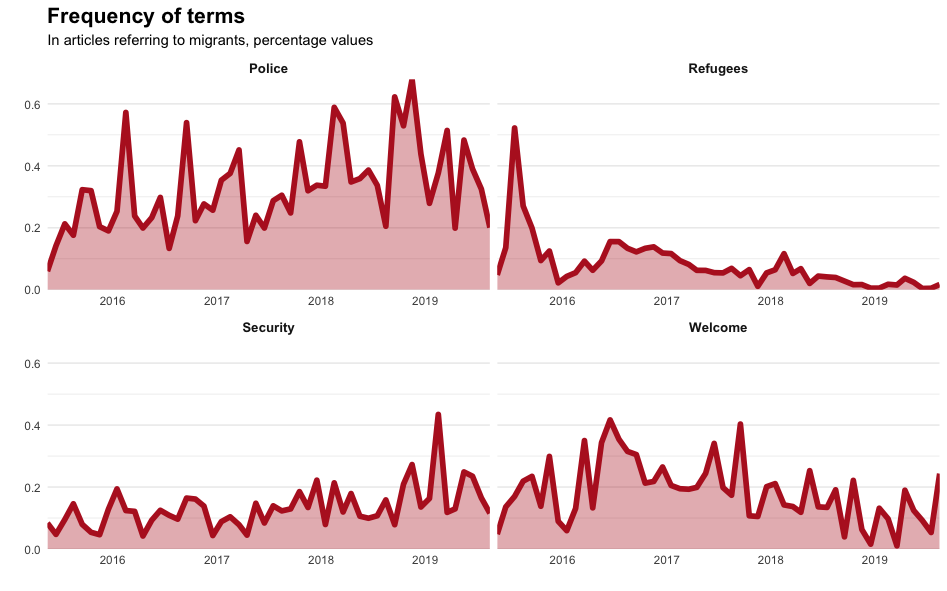 As can be seen in the visualisations, the security narrative (“sicurezza”) becomes increasingly present over time, along with an ever more insistent call on the forces of order (“polizia”) to take action. On the other hand, terms with positive connotations, such as “welcome”, become less frequent. Moreover, migrants are no longer called “refugees” — a term which has practically disappeared over the last few years.

The migrant question and Ventimiglia

The local media’s hostile narrative reflects the actions undertaken by the local administration.

In recent years, Ventimiglia’s mayor Enrico Ioculano (Democratic Party) adopted a series of measures to confront the issue. However, unable to find short-term solutions, Ioculano opted for a hardline policy, with little inclination towards compromise. All too often, the local government’s decisions have seemed dictated by nervousness and the need to appear to be doing something, rather than a strategy likely to manage and resolve the situation.

Already in 2015, there were systematic evictions of all informal reception centres, created in this case by various “No borders” groups. The clearing of one particular self-organised camp was symbolic, becoming a reference point for migrants and activists. The camp was cleared on 30 September 2015, by means of a massive operation by police and carabinieri: migrants in the camp were taken to a Red Cross camp, the activists were identified and reported, and everything that was in the camp (furniture, clothes, food, medicine donated by citizens) was taken away by sanitation workers.

In the spring of 2016, arguing with his own party — guilty, in his opinion, of not giving him sufficient support — Ioculano took leave of Partito Democratico (PD) along with with eleven majority councillors.

In the spring of 2017, a subsequently revoked decree, which was heavily criticised by various associations including the Italian Union of Police Officers, prevented the distribution of food and water to migrants.

In the summer of 2017 the “Gianchette” were cleared and closed — home to a reception centre run by the Catholic church for women, minors and families at risk, which in less than a year and a half had assisted 13,000 people.

Still in 2017, warrants were released, and “socially dangerous” activists known to help or protest with migrants were banned from Ventimiglia and adjacent territories.

In 2018 the mayor managed to have certain migrant camps cleared — despite the prefecture itself objecting because they didn’t know where to relocate the people.

Former mayor Ioculano also stands out in an analysis of the media. Among the most frequently used terms in articles dealing with migration, “Enrico Ioculano” is second only to “Red Cross”, which has established and managed camps for migrants in Ventimiglia. 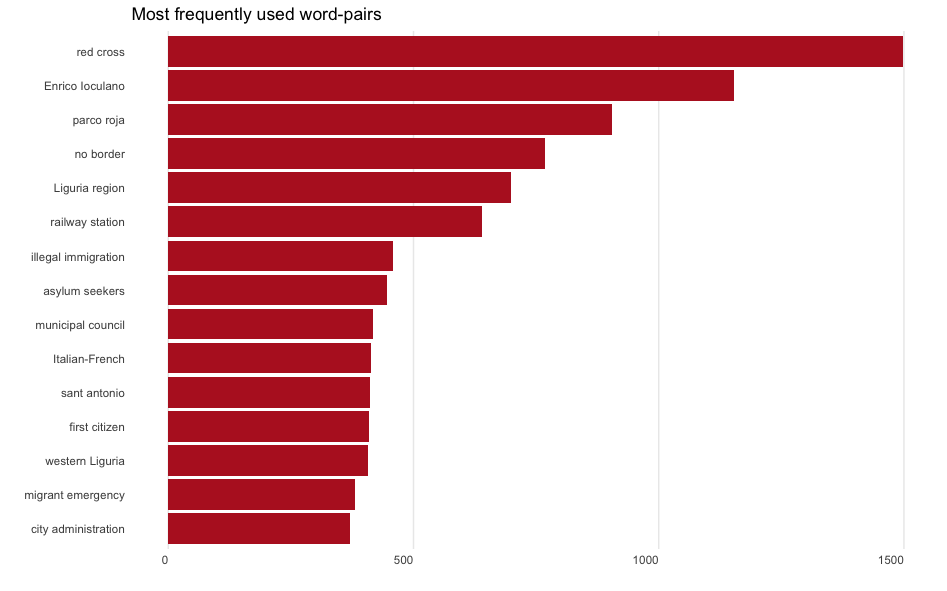 For the local press, immigration appears to be something “clandestine”, and an “emergency” that needs to be resolved. In addition, there are references to No Borders groups, which assisted migrants and challenged the actions of the authorities.

The border and France

Ventimiglia is a place of transit. Migrants arrive with the intention of continuing their journey to other European countries. Some data collected by non-governmental organisations (the authorities don’t collect such figures) shows 18,000 expulsions by the French authorities between summer 2018 and summer 2019. These expulsions, they claim, include serious abuses of power and authority.

In particular, it was reported:

Given the impossibility of crossing the border legally, one of the few ways to get through security and enter French territory is to rely on networks of passeurs: for a sum of around 300 euro per person, passage can be obtained — in the trunk if it’s too crowded.

These journeys are often organised by criminal organisations, in what are genuine cases of human trafficking. Those who cannot pay often commit crimes to make the money, or resort to more degrading means: numerous cases of underage prostitution have been encountered, linked to obtaining the resources necessary to cross the alps.

Ventimiglia after the emergency

Following the elections last spring, Ioculano lost his position as mayor in the centre-left administration.

Centre-right candidate Gaetano Scullino won the first round with 53 percent of votes. Lega became the leading party in the city with more than twenty percent of votes. The line taken on migrants doesn’t seem to have changed.

As much as it is still too early to draw conclusions regarding the new local administration, it can still be said that Ventimiglia has continued to fight for its honour, with an apparent desire to revive its image with luxury tourism.

While 16,500 euro were allocated for cleaning the areas where migrants “bivouac”, the mayor refused to create an info-point for these migrants because there were too few of them.

Following the substantial closure of migratory routes from Africa, the situation is no longer as critical as it was in 2015 and 2016. However, hundreds of people still try to cross the border on a regular basis, and are hosted by reception centres. Now, they arrive in Italy along the so-called Balkan route, or have been brought back to Italy from other EU countries they had managed to reach.

Among these there are also people who enjoy a rapidly expiring “humanitarian protection” — no longer renewable after the amendment enacted by the Conte government — who will soon officially become new “illegals”: another “emergency” to be resolved.