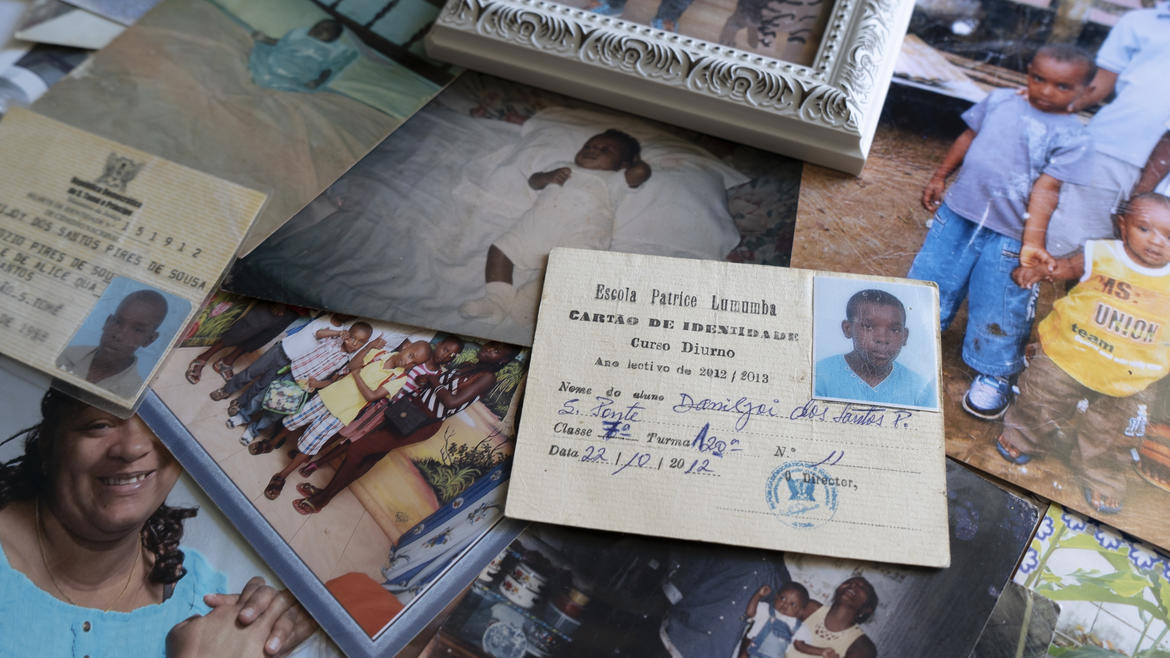 A white organza curtain billows with the wind and lets in the morning light. On the wall behind the flowery-sheet-covered sofa, a handwritten note reads: “Danijoy boss, boss, boss, boss, boss...” I’m nervous, I keep moving the camera and tripod around to try to find the best filming angle. Alice Santos’ house is the location of my first interview with Divergente. Sofia da Palma Rodrigues is testing the recorder and the microphones.

Alice leaves us to set up. She’s off to the Social Security Offices in Sintra soon, where she works as a porter, and she has to leave lunch ready. “I’m about done, then I’ll be with you.” Before sitting in the chair that we have judiciously placed in front of the window, she picks up, one by one, the framed photos of her four children that are displayed in the living room and introduces them:

— Daniel, he’s the baby, Derickson, Danijoy, Danilson.
— All the names start with D?
— I always wanted my children to have names starting with D, to not mix, just D.
— There’s Danijoy when he was younger...
— Here?
— No, there. That’s my Daniel.

When she talks about her second oldest son, Alice’s voice changes tone, as if she was trying to stall the words’ rhythm to savour every second. Danijoy Pontes died in September 2021, 23 years old, in the Lisbon Prison Establishment, but Alice still talks about her son in the present. “On our birthdays here at home, Danijoy’s the cook. Sometimes on the weekend he says, ‘Mum, I’ll make the breakfast today... I will provide.’" Accused of 10 thefts on Lisbon public transport, the São Toméan was sent to pre-trial detention in 2020, for a total of 11 months, then sentenced to six years in prison. He had a clean criminal record before this.

The reality in other countries is pretty similar and can be studied in detail thanks to EDJNet's investigation on the abuse of pre-trial detention in the European Union, coordinated by Civio and in which Divergente also participated. You can find the video of the interviews that we conducted with Alice Santos and Adriano Malalane, the defence lawyer on the case, in the context of this investigation:

The project allowed us to take a cross-border perspective and conclude that in the European Union, a pre-trial detainee, to start, is more likely to be sent to prison in their sentencing. The reason? “Judge corporativism. They force coherence between them and the previous judge’s decision”, said Adriano Malalane in relation to the Portuguese context. “After the death penalty, [pre-trial detention] is the most serious sentence that a State can use against a person in a democracy”, the German criminal law specialist Thomas Röth explains.

I decided to be a journalist because I like to tell stories. At Divergente, I learned that feeling that what we have in front of us can really make a difference – more than painstakingly prepared questions, more than skilled writing. “All mothers like to talk about when their children were small. We’ll ask them if she remembers a special time when Danijoy was a child...”, said Sofia as we went through the interview script. Seconds after having asked the question, Alice took us to the Manuel Jorge River, in São Tomé e Príncipe, where she used to go with her children on the weekends to swim in the river, climb coconut palms, pick fruit and have family reunions around a fire. “There was love”, she says.