France: The pandemic has exposed a dysfunctional prison system

While the poor state of French prisons led many to fear a serious health crisis in the wake of Covid-19, the worst of those fears have not materialised. However, the drastic lockdown measures have done nothing to benefit the mental health of detainees. Nor have they led to any serious reevaluation of the system itself. 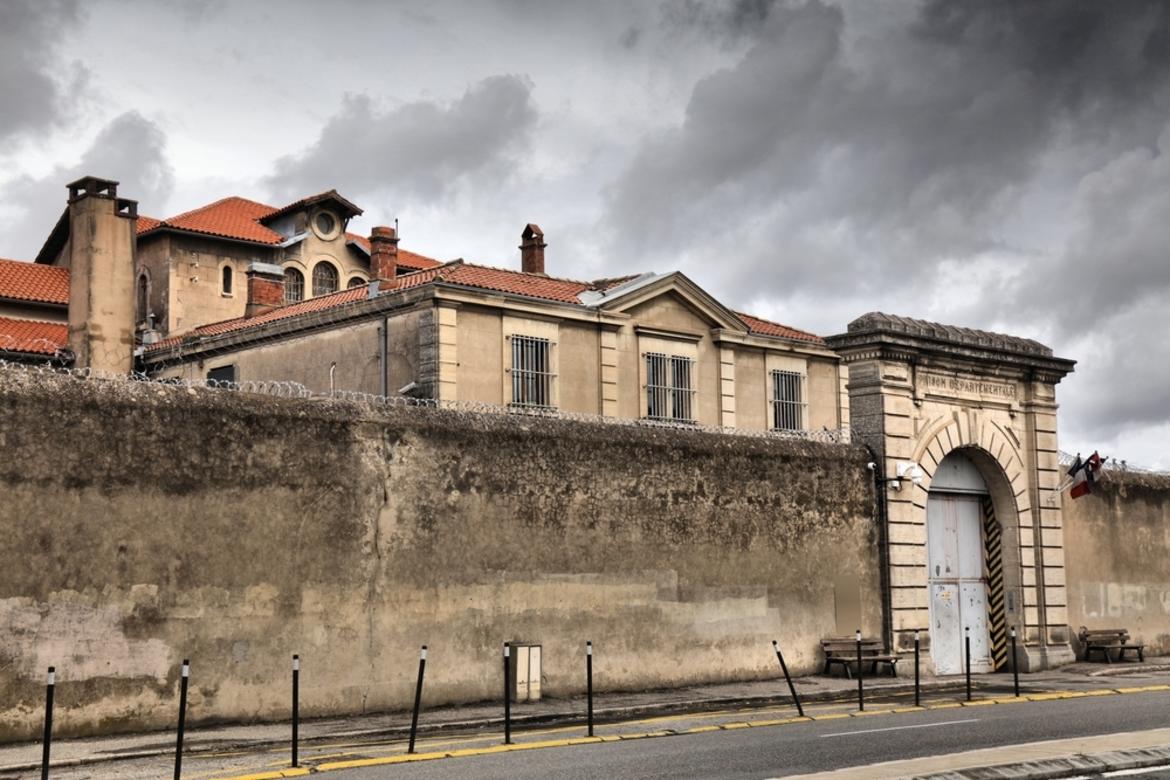 "A prison within a prison": this is how many prisoners describe their experience during the pandemic. From March 2020, prisoners in France were subjected to a number of restrictive measures, including the cessation of workshop labour, socio-cultural and sports activities, education provided by the national education system, and visiting hours.

In prisons, where the average occupancy rate before the pandemic was 138 percent (compared to 90 percent in detention centers), inmates were confined to their cells for 22 hours a day. A walk with a small group of prisoners was the only activity permitted. In detention centres, which typically have an "open doors" policy during the day, doors were in fact closed, bringing them ever closer to the prison system.

In a sociological study of the prison experience during the Covid-19 public health crisis, researchers Léo Farcy-Callon, Lara Mahi and Vincent Rubio explain that all workers deemed "non-essential" were encouraged to stay at home, while many others, such as prison probation officers or medical professionals (psychiatrists, dentists, etc.) were forced to cancel their appointments with prisoners.

The "prison within a prison" was also created by the lack of any continuity between the different phases of the pandemic. Outside in the free world, schools established "educational continuity" via digital platforms; in prisons, everything simply stopped.

Cessation of visiting hours was the most difficult measure for detainees to swallow. The policy even triggered mutinies in certain prisons, for example in Uzerche prison in Corrèze on 22 March 2020. After a total suspension during the first lockdown, visits from family members resumed on 11 May 2020.

From one institution to the next, a status quo emerged: prisoners are entitled to a weekly one-hour visit. Physical contact and laundry gifts are prohibited. Some visiting rooms are equipped with Plexiglas windows. "Visitors describe a very unsatisfactory atmosphere in facilities with glass partitions. Masks, distancing, ambient noise and lack of human contact hinder any interaction. Some visitors say they would rather not visit their imprisoned relatives", reports Prison Insider .

Then, with the resumption of visiting hours and the possibility of taking leave, prisons implemented a reinforced isolation policy. Cells, generally located in the arrivals section where new prisoners begin their incarceration, are used to quarantine prisoners returning from the outside world, as well as those presenting symptoms that qualify them as "contact cases".

A number of measures have been adopted in an attempt to compensate for the isolation of detainees. On 23 March 2020, the Ministry of Justice announced the allocation of 40 euro credit for each detainee, for use in their facility’s telephone booths. Television is free, and financial aid for the most disadvantaged prisoners has been increased by 40 euro per month. In some prisons where there is no shower in the cell, daily showers have been introduced (instead of two or three per week). Despite these measures, the French General Prison Inspector (CGLPL) stresses "the insufficiency and inefficiency of these compensatory measures".

The most impactful decision was taken on 25 March 2020. An ordinance allowed for the early release of prisoners at the end of their sentence, for the duration of the public health crisis. "This relative opening of prisons was intended to relieve overcrowding. It was based on the recommendations of a number of civil society actors and institutions such as the ECHR and the CGLPL", says Carolina Nascimento, head of the Prison Insider information desk.

In just three months, the occupancy rate of French prisons dropped from 115 to 96 percent on 1 July 2020. "This drop has mainly affected facilities in Paris, Bordeaux and Lyon, while the prisons of other inter-regions like Toulouse have remained overcrowded," says sociologist Lara Mahi.

These measures turned out to be indispensable. When the first lockdown was announced, social distancing seemed an impossibility in France's overcrowded prisons. "The pandemic confirmed that in facilities where the minimum standards of access to rights and healthcare were upheld the epidemic was more easily managed," explains Carolina Nascimento. "Of course, France does not have the same detention conditions as Brazil or Venezuela, where detainees have to rely on their relatives for even food and medicine. But overcrowding has been a central issue. Comparisons make this clear: in Norway, for example, where individual cell confinement was already practiced before the pandemic, it was easier to control the contagion".

In March 2021, Prison Insider published a study conducted in collaboration with Amnesty International. It concluded that "the spread of Covid-19 in prisons has highlighted systemic threats to health in detention, such as overcrowding and poor sanitary conditions, and exposed years of underinvestment and neglect of prison health services". France is cited alongside Cambodia, Iran, Pakistan, Turkey and the United States for "the frequent lack of preventive and protective measures in detention facilities".

"The French prison is a poor institution that manages a poor population," says Corinne Rostaing, sociologist and author of Une institution dégradante, la prison. "You only have to visit a prison to see the neglected equipment, the dilapidated state of the premises, and the shoestrings keeping the prison running on a daily basis. Budget cuts have had visible consequences at the institutional level. And overcrowding has contributed to the depletion of resources. In France, inmates and prison staff would never be considered priority recipients of either masks or vaccines. On 5 February 2021, the Council of State stated "that the risk of developing a severe form of Covid-19 does not appear to be higher for prisoners than for the average population."

The impact on mental health

Lastly, one essential consideration has remained a blind spot for the Prison Service: the impact of lockdown measures on the mental health of prisoners. As early as May 2020 the International Prison Observatory expressed concern that some prisoners remain in their cells 24 hours a day for fear of infection.

"Now, we already know that detention can cause deterioration in mental health", says Corinne Rostaing, adding that a number of medical and psychological problems can often accumulate during detention: mental illness, depression, drug addiction, suicidal tendencies. The latter have not been quantified in France. "In Ireland”, Carolina Nascimento tells us, “the Prison Inspector and the Red Cross distributed notebooks to vulnerable inmates so that they could document their feelings. For the first time, inmates described the suicidal thoughts brought on by total isolation."

More broadly, the management of the prison health crisis has reinforced the prisoners’ sense of dependence on the institution. "While intercom systems exist in some of the new or recently renovated prisons, they do not necessarily lead to a rapid response from prison officers. And in the absence of intercoms, there is only one option: shouting, making noise by banging on the cell door, and then waiting, sometimes for hours, sometimes with no response," write the three researchers in their survey of Covid-19 measures in prisons.

This feeling was reinforced by the haphazard and divergent practices across the French prison system. "Most importantly, the strictness of measures applied in each facility, as well as their timing, were not explained by case numbers of the virus in that particular region or facility”, the authors continue. “Health units applied varying testing policies on a daily basis, according to their own local protocols."

"The Covid-19 epidemic reveals the disciplinary character of the prison institution. The control of prisoners’ prophylactic measures (masks, social distancing) has ended up being integrated into its system of penalties", claims Lara Mahi. In particular, if a prisoner fails to respect all separation measures they may be subject to an incident report. These reports, drawn up by the supervisors, can lead to various penalties, the most severe being solitary confinement, as well as the withdrawal of sentence reduction credits.

Disciplinary management also includes granting certain "privileges" (a phone call, getting tobacco from another cell, etc.) to inmates who submit to a PCR test. However, this system has led to detainees preferring to lie about their coronavirus symptoms for fear of being subjected to even more restrictive imprisonment. The distribution of masks and hydroalcoholic hand sanitiser has also impacted the prison system, where face concealment and “alcohol consumption” are prohibited. While some facilities provided masks to inmates as early as spring 2020, others did not do so until several months later.

Beyond the psychological consequences, the cessation of recreational activities and work had an impact on the very meaning of the sentence and indirectly led to additional penalties. "The injunction to have a 'project' in detention may have appeared out of step with the context", suggest the authors of the study. In the absence of "evidence" of rehabilitation or good conduct, some judges found it more difficult to accept appeals for shortened sentences.

"Nevertheless, it’s interesting to see how measures could be enacted so quickly during the crisis", says Nascimento from Prison Insider. In France, everyone concerned agrees that the policy of early release, enacted in spring 2020, was a “historic moment”. However, continues Nascimento, "the problem is that this measure was never part of a medium or long term policy". This is clearly seen in the occupancy rates of certain prisons a year and a half later. In Toulouse, the occupancy rate reached 168 percent. This feeling is shared by a myriad of national and international organizations. On 17 September, the Council of Europe called on authorities to establish a "strategy to reduce the occupancy rate".

While criminal statistics show a significant decline in the number of people incarcerated in Western Europe over the past ten years, France stands out with an increase of 1.7 percent (compared to -9.9 percent in the UK, -12 percent in Italy, and -13 percent in Germany). "Prison remains the benchmark sentence," laments Corinne Rostaing. "We need a genuinely proactive policy to shift the paradigm away from punitive logic. But the prison is not an autonomous institution. It depends on political decisions, laws, justice and the magistrates who deliver sentences."