Our thematic focus this month is entirely on the legal and democratic challenges that the pandemic is posing to our societies. In particular, we look at how fundamental rights may be threatened by some emergency measures that are adopted or discussed in Europe. 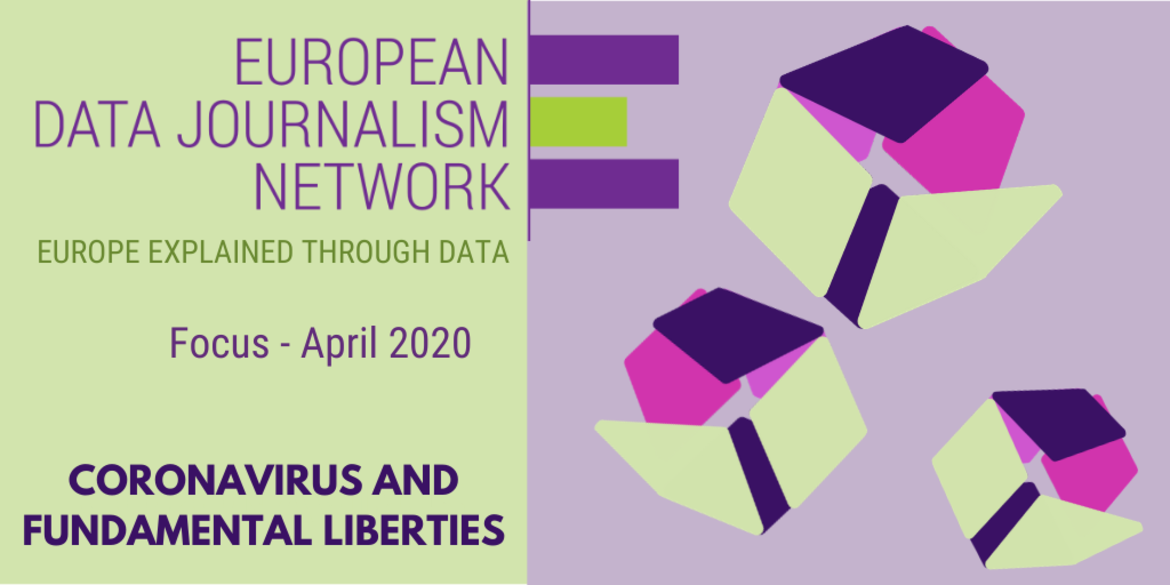 Here are the EU member states where a state of emergency is in force: 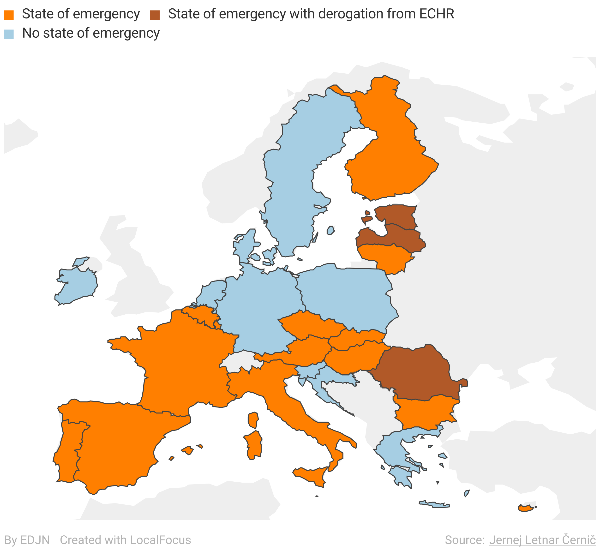 State of emergency and its risks

As governments have been adopting measures restricting citizens' liberties all over Europe, even EU institutions now talk of “emergency” more eagerly than of “rights” – as our Quote Finder shows. 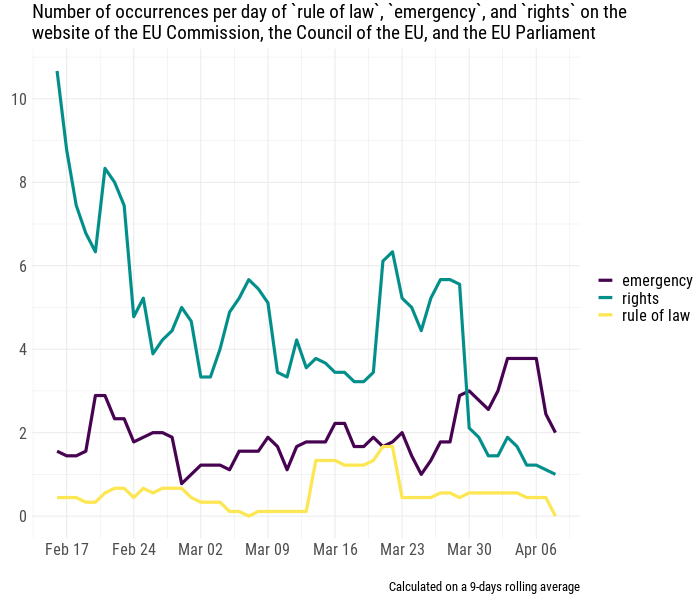 The European press is signaling the risks that some restrictive measures may entail. Emergency measures introduced by Viktor Orban’s Hungary were harshly criticized in some quarters – except for the EU Commission. Moves by other governments also raise concerns however; here’s how the national Human Rights Institutions are responding to them.

Estonia, Latvia, and Romania have officially notified their derogation from the European Convention on Human Rights (ECHR), while the other EU member states have declared emergency measures within the provisions of the Convention. A debate is taking place on what is best practice: as Alan Greene notes, “some MEPs say derogating from the ECHR sends out the ‘wrong signal’ about a state’s commitment to human rights. On the other hand, failing to declare a state of emergency via the ECHR may leave these nations less accountable.”

NGOs, think tanks and EU institutions have issued guidelines and recommendations on how to develop the so-called corona-apps, to ensure that full data protection and privacy standards are respected. We're following closely this debate, as part of our Panelfit project.

Access Now puts forward worries on the commercialisation of the data collected and on geo-location issues, while Algorithm Watch reminds that COVID-19 is not a technological problem, and that protection and privacy are not mutually exclusive. Their guidelines also push for an open and decentralized solution, mentioning the Pan-European Privacy-Preserving Proximity Tracing project. The latter earned attention as a promising standard, but lately it seems they're not the good guys anymore.

The tension between a centralised/decentralised approach hasn't been resolved by the Guidance issued by the European Commission. While welcoming much of the circulating suggestions, the document opens to a centralised approach. States have to choose, basically, whether to put all the data on people’s devices, or on centralised servers run by health authorities. In theory, all data is anonymised – but data can almost always be deanonymized.

And then the elephant in the room: the initiative by Apple and Google to develop a common protocol for corona-apps. The Markup makes a list of pros and cons of the proposed solution. Others raise the unavoidable question: is it right that two big companies define the standard that will be globally applied?

COVID-19 Civic Freedom Tracker is a tracker developed by INCL to monitor responses to the pandemic that affect civic freedoms and human rights, while The Correspondent has launched a crowdsourcing initiative  to track the use of surveillance technologies around the world.

COVID-19 and the most vulnerable

Life in lockdown is hard for everyone, but it is harder for some people – who don’t necessarily come under the media’s spotlight. “Stay home” is better said than done for homeless people, for instance: the Arena Housing Project has been compiling the measures announced by authorities across Europe regarding the homeless. The picture is far from complete, but some best practices and worrying signs do emerge.

Inmates are another category of vulnerable people who cannot actually stay at their home: coronavirus in prisons is dangerous for both the mental and physical health of detainees. This blog post by Olga Zeveleva provides an overview of what’s going on in prisons in Europe and elsewhere, while WHO/Europe has published some guidance. 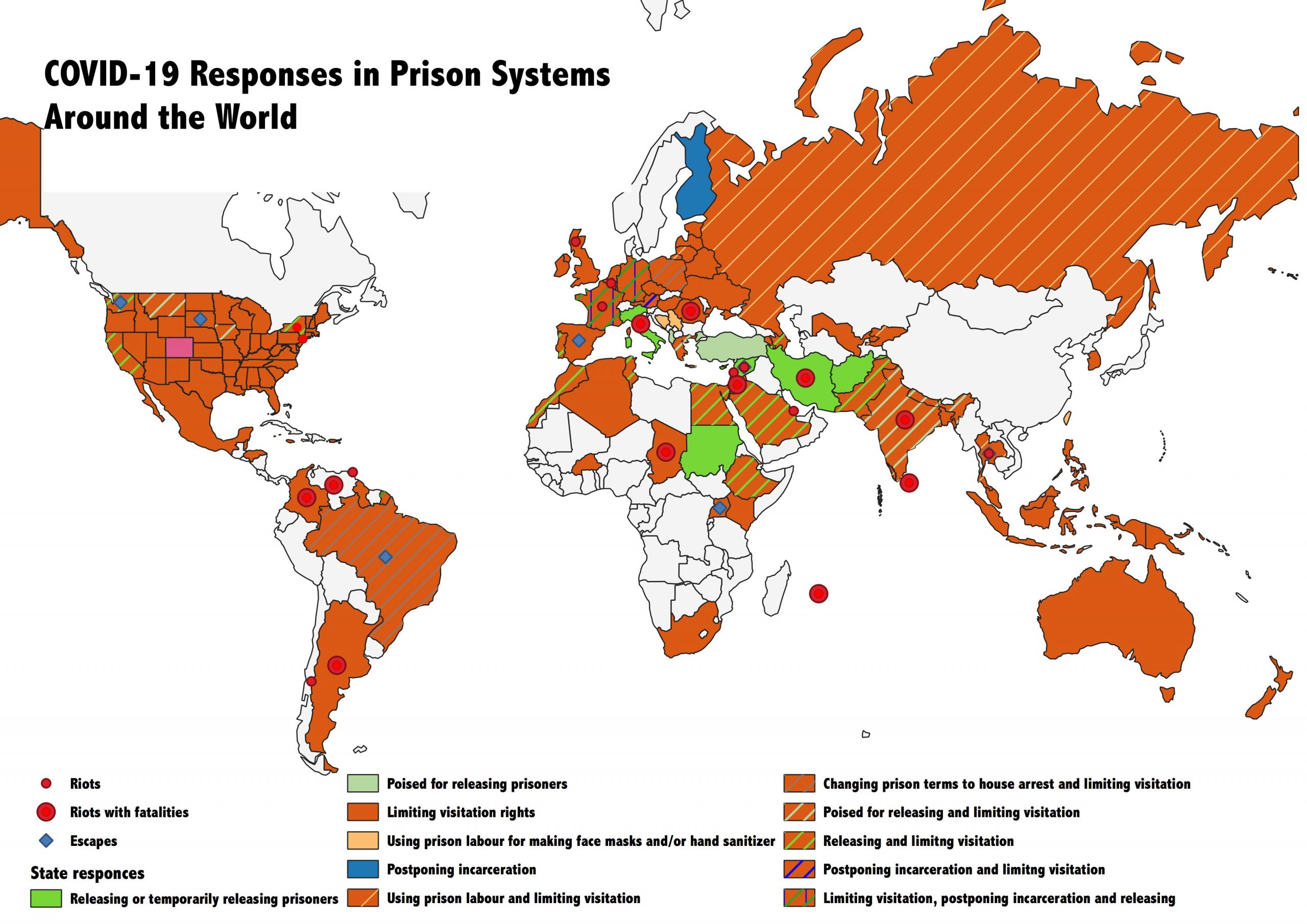 Lockdown can be incredibly hard for people with mental health problems and for victims of domestic violence too: data about them is still mostly missing, but unfortunately this is no news. For the general picture on mental health, the MiND Bank by the WHO remains a reference point.

How can data journalists contribute?

Big companies and large organizations are offering support to a number of journalistic initiatives, with new calls coming out every day (but watch out, deadlines are often tight): here's EJC/Facebook , Google , Pulitzer Center , National Geographic , and even more are around. They can be good opportunities to cover aspects of the pandemic that haven't been much explored yet, including those related to fundamental rights.

When talking of human rights and COVID-19, the guidelines  shared by Liberties constitute a useful reference point.