Cramped, often unhygienic, and already characterised by numerous restrictions, many prisons in Europe were hit hard by the pandemic. In Italy, where prison facilities are among the most overcrowded in the EU, the pandemic aggravated a number of preexisting systemic problems. 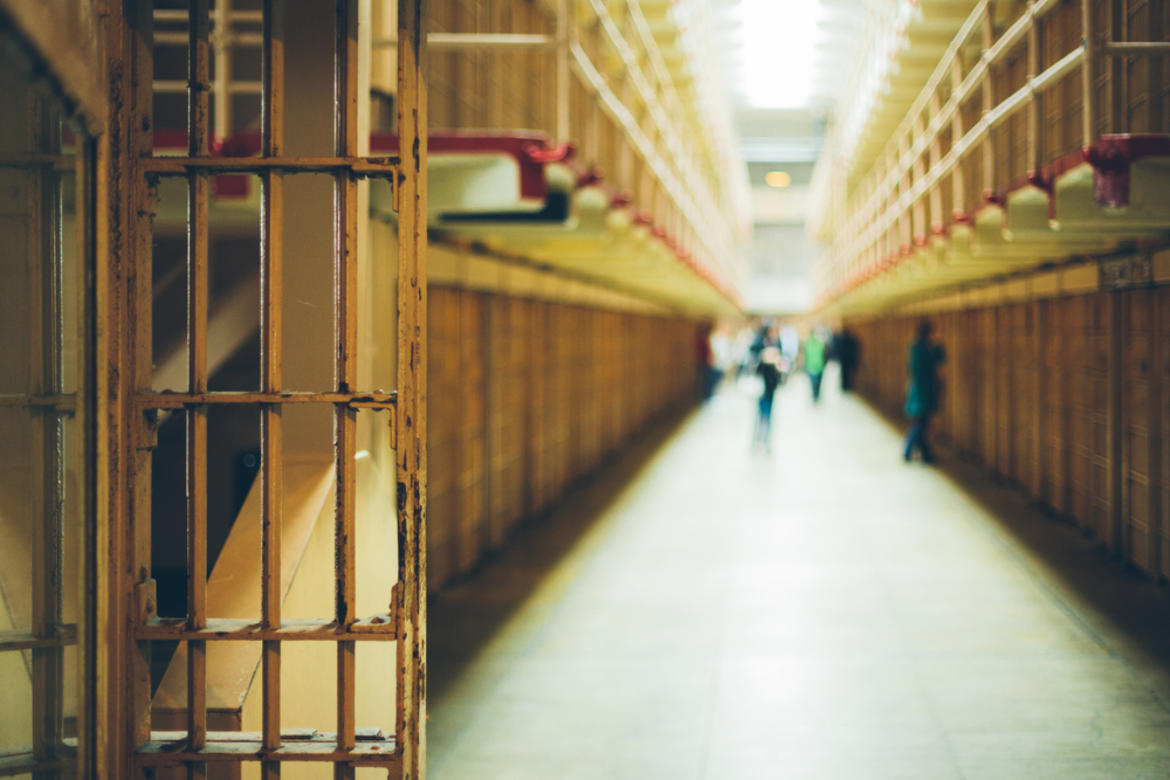 The Covid-19 pandemic’s impact on work, education, gender, social inequalities and many other quality-of-life issues has obviously been more severe for some groups of people than others. Among them are female victims of domestic violence forced to spend more time at home with their abusers; precarious workers who have suffered the consequences of the economic crisis and the decline in employment; large families living in crowded houses; people without internet access for remote work or distance learning.

Another group most severely affected by the pandemic are prisoners. Although prisons are often thought of as isolated environments somewhat protected from the outside world, chronic overcrowding has led to many difficulties in managing the virus.

According to the NGO Ristretti Orizzonti (“Confined Horizons”), the public health emergency has exacerbated and drawn fresh attention to structural problems within prison systems in Italy as well as many other European countries. Together with 11 other media outlets in the European Data Journalism Network (EDJNet), Openpolis collected data from 32 countries concerning the containment of the pandemic in prisons.

Prison conditions on the eve of the crisis

Before the coronavirus outbreak, at the beginning of 2020, more than 62,000 people were being detained in Italian prisons. This was the fourth highest number of prisoners in EU prison systems, after Poland, France and Germany with about 75,000, 71,000 and 63,000 prisoners respectively. Considering the total population, in 2019 in Italy there were 104 prisoners per 100,000 inhabitants, below the EU average of 119.6.

However, this was purely an emergency solution, rather than an organic one, and the number of prisoners began to rise again the following year.

Following another gradual drop from 2010 to 2015, the figures have been rising again in recent years. Despite a parallel increase in the capacity of penitentiary facilities, the number of prisoners in Italy has continued to exceed the capacity of these facilities.

Overcrowding, a systemic problem in Italian and European prisons

Prison overcrowding – the number of inmates in excess of the facility’s regular capacity – occurs in quite a number of EU Member States.

According to the council of Europe , this phenomenon is explained by the fact that in many EU countries there has been a gradual expansion of the range of crimes punishable by imprisonment (petty crime, for example), while at the same time there has been a lack of reorganisation in the prison system to respond to these changes.

Some countries have built new prisons, or at least increased their available capacity. While this partly addresses the problem of overcrowding, it clearly has no effect on the rate of imprisonment. The situation is also aggravated by an increase in the average length of sentences.

If we look at the figures related to each Italian prison, we see that the situation varies at the regional level.

Only in seven Italian regions (about one in three) prisons are not overcrowded. In 2021, Sardinia had 559 unoccupied places, with only Valle d'Aosta ahead in terms of occupancy rate (75.5 percent).

Overcrowding, a question of healthcare and human rights

By itself, Imprisonment is already a troubling and dramatic situation, both because of the potential mental and physical hardship, and because of the serious difficulties of reintegrating into society when the ordeal is over. Indeed, these difficulties often lead to reoffending. In this sense, overcrowding only aggravates the condition of prisoners further, by forcing them to share an even more confined space than usual.

The European Committee for the Prevention of Torture states that each prisoner must be provided with a space of at least four square metres.

Sufficient space for prisoners is an issue of fundamental rights as well as privacy. But is is also a relevant healthcare issue.

Health was obviously a major concern during the pandemic. The limited space available, together with the poor hygiene, made it difficult to comply with health protocols – social distancing first and foremost. Thus, the likelihood of infection increased exponentially, with the prison environment unprotected and all too exposed to the virus.

In the initial phase of the pandemic, when the first restrictions for prisoners were rolled out – including the suspension of family visiting hours – these systemic vulnerabilities exploded, giving rise to sometimes violent protests by Italian prisoners. Underlying their frustration was the fact that social distancing, considered an exceptional and unprecedented measure, aggravated an already strong sense of social isolation.

According to data from Antigone, between 7 and 10 March 2020 there were riots involving about 6000 inmates in 49 different institutions, which led to the death of 14 prisoners and the injury of more than 40 prison officers. Whole sections of some prisons were destroyed, and dozens of prisoners escaped from a prison in Foggia.

While infections in prisons were initially very limited, it did not take long for the situation to spiral. Italy, like all other EU countries, introduced a series of primarily restrictive measures aimed at containing the pandemic.

The first restrictions in Italy came as early as February 2020 – before the general lockdown was introduced. Visits from both family and people with whom detainees worked or trained, as well as recreational activities, were mostly suspended. Even the receipt of parcels was cancelled.

After a state of emergency was declared, these measures were further tightened, to the point of completely suspending visits and leave permits. The aim was to avoid all possible contact between people inside and outside the prison. While this may have helped contain infection, it also increased the frustration of the inmates by making an already confined space even more uncomfortable. This effect was mitigated, albeit insufficiently, by a series of so-called compensatory measures. These included allowing detainees to make greater use of phone and video calls to balance the cessation of visits.

This has also occurred in other EU countries. Some have also introduced so-called external or deflationary measures, oriented towards the reduction or commutation of sentences, or to a pardon.

In Italy, a deflationary measure was applied for sentences, or remaining sentences, of less than 18 months. Decree-Law 18/2020 allowed for these cases to be transferred to care facilities or directly to the prisoner's home.

The evolution of prison infections

According to the monitoring conducted by Antigone , during the first wave of the pandemic, between March and October 2020, few infections were recorded in Italian prisons. During the second wave, between October and December 2020, the number of infections rapidly increased.

During the first wave, the total number of prisoners also decreased. In part, this was due to the introduction of deflationary measures, but also the fact that lockdowns reduced opportunities for traditional crimes, as reported by the Council of Europe . In contrast, during the second wave, the prison population grew along with the infection rate. This trend was common to almost all EU countries.

Finally, as was also the case for the outside population, during the third wave (February to June 2021) there was a gradual decrease in infections.

Infection rates followed a similar trend among prison staff. Starting in November 2020, when the Ministry of Justice began tracking the data, the number of positive cases among both prisoners and staff was falling until February 2021, then rose again in March and gradually fell until now. In recent weeks the numbers have started to rise again.

Other countries where on average Covid-19 has affected the general population more than the prison population are France, Austria, Ireland, Germany, Bulgaria, Denmark and Hungary.

According to Antigone , the healthcare environment in prisons was already precarious before the arrival of Covid. In 2019, each prison had an average of only one general practitioner for every 315 inmates, and 70 percent of these were casual workers: clearly insufficient for an environment that is often unhygienic as well as crowded, and also populated by people with pre-existing conditions.

Many psychiatric and infectious diseases, as well as heart problems, hepatitis, diabetes and drug addiction, have a higher average incidence among the prison population. This is partly due to the below-average socio-economic status of most prisoners, which has a strong correlation with poor health outcomes.

Thus, the pandemic entered an already dysfunctional health context and aggravated it, given that the presence of other diseases can exacerbate the risks linked to Covid infection.

According to data collected by Ristretti orizzonti , who monitor prison deaths, 21 prisoners have lost their lives to the virus since November 2020.

The vaccination campaign inside prisons

Like other international institutions, the European Commission has underlined the importance of treating prisoners as a priority category for vaccination efforts, precisely because of how difficult it is to maintain social distancing within prison facilities.

However, according to data collected by EDJNet, most EU countries have not granted prisoners priority access to vaccines. Among the countries analysed, this is the case in France, Belgium, Germany, Denmark, the Czech Republic, Hungary, Slovakia, Estonia and Greece. This is in contrast to Spain, Italy, Latvia, Ireland and Bulgaria, which have ensured prisoners have priority access to vaccines. In Italy, prisoner and prison staff vaccinations began in March 2021.

By the end of November 2021, about 84,000 vaccine doses had been administered and about 40,000 inmates had likely completed the cycle. According to data provided by the Italian Ministry of Justice, 25,000 prison staff have been vaccinated as well.

Especially in view of the new wave, which has already led to a significant increase in infections by November 2021, pushing forward with the prison vaccination campaign remains a key objective.