Almost all European regions have managed to bring excess deaths down

As summer nears its end, it is becoming possible to evaluate the coronavirus pandemic’s toll on European regions over nearly six months. We have analysed data from 776 subnational regions to better understand where the virus is continuing to hit hard. 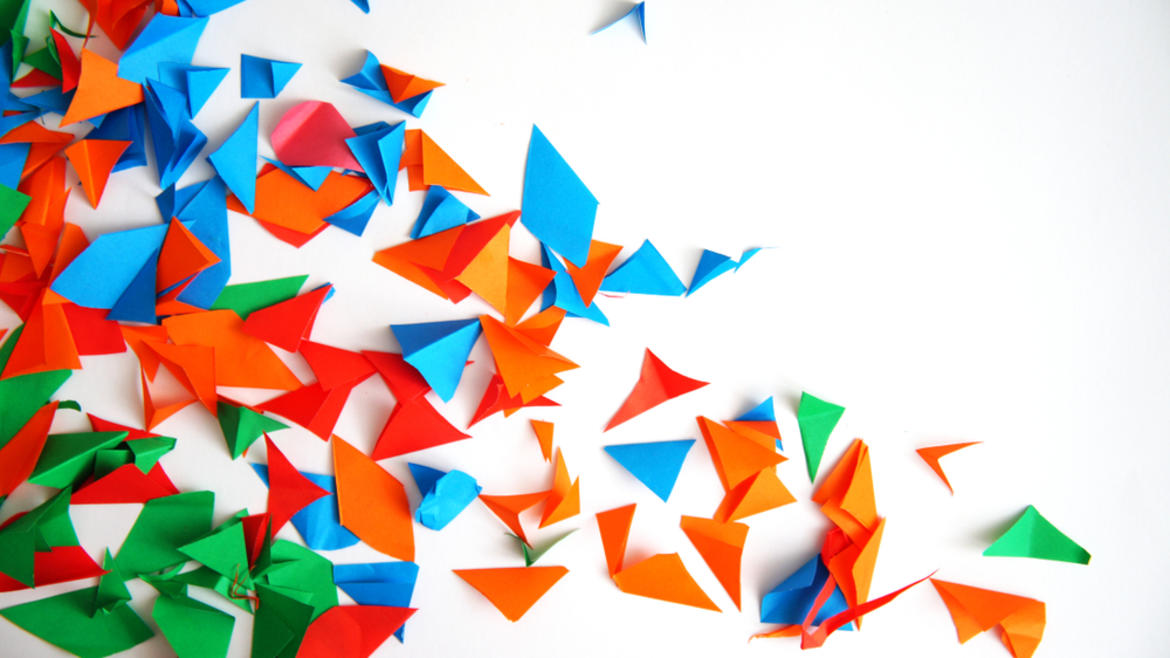 You can explore the data on excess deaths in European regions yourself.

Data from 21 European countries shows that over 225,000 more people than usual have died since the start of the COVID-19 pandemic earlier this year.

Breaking down the excess deaths by when they occurred allows us to identify areas where the epidemic is continuing to hit hard, after the first wave made areas like Bergamo in Italy and Madrid its first epicentres.

In spring (March-May 2020), the worst-hit areas counted their excess deaths in the thousands, and about one-third, or 255, of all the regions we’ve analysed had at least 25 per cent more deaths than usual. Over the summer months, between June and August 2020, this was the case in just one region, Legnicko-Głogowski in Poland, where 81 more people than usual died. 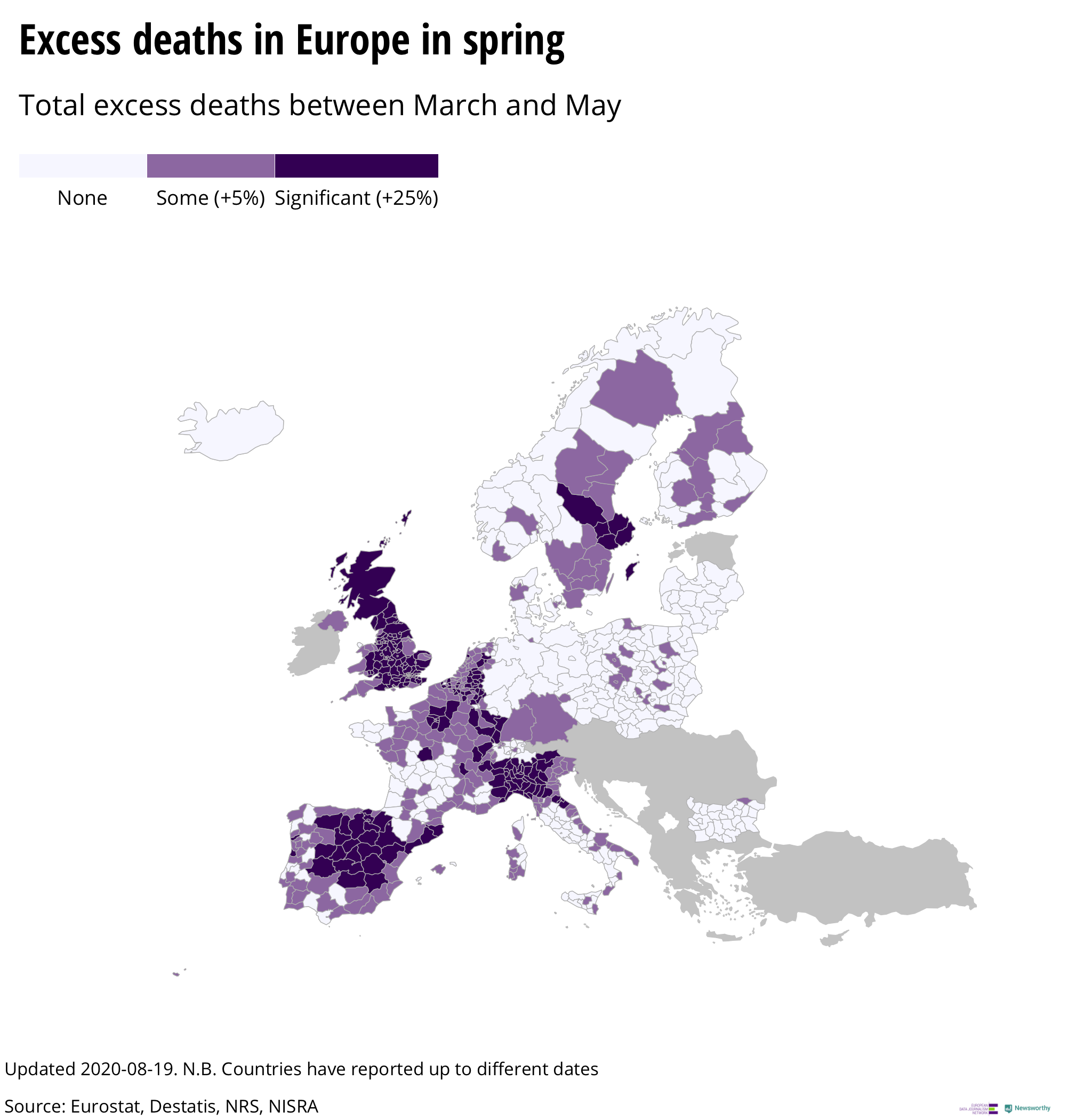 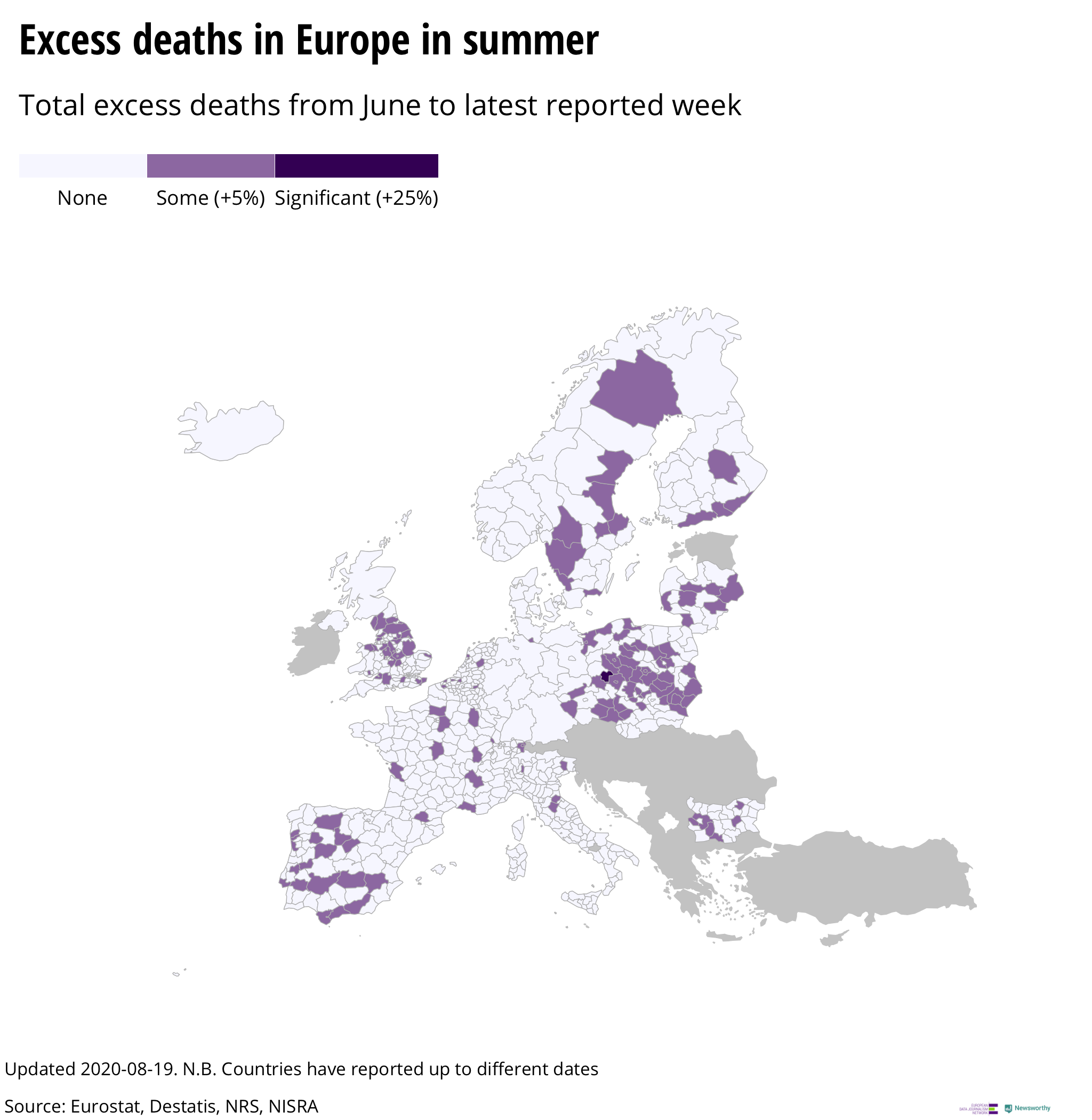 This far into the COVID-19 pandemic, almost all European regions have managed to bring their excess deaths down. In fact the vast majority of regions we've analysed, about four in five, had deaths at more or less normal levels over the summer months.

However, progress has been slower in some countries than others. Sweden, an outlier in its handling of the coronavirus pandemic, also stands out in our data, as nearly half of all regions (43%) in Sweden still had more deaths than usual during the summer. This is higher than all but two other countries, Poland (51%) and Czechia (50%), both of which currently have as many new daily cases as they ever had.

Other countries where several regions were still seeing excess deaths over summer include Lithuania (40%), Latvia (33%), Portugal (32%) and the UK (22%).

The United Kingdom stood out in our June analysis of excess deaths, as a country with a rather uniform spread of high excess deaths across the country: in most countries the spread of coronavirus this spring was regional, rather than national, and largely contained to one part of the country. In the UK however, all regions but one had at least 25% excess deaths.

Stockholm back to normal levels

For Sweden, Stockholm has been where the bulk of coronavirus deaths have occurred. In the spring, 4,745 more people than usual died in Sweden, and nearly half of these excess deaths occurred in the capital. With 59% more deaths than usual, Stockholm had a higher excess death rate of than all but 68 of the 776 regions we looked at. 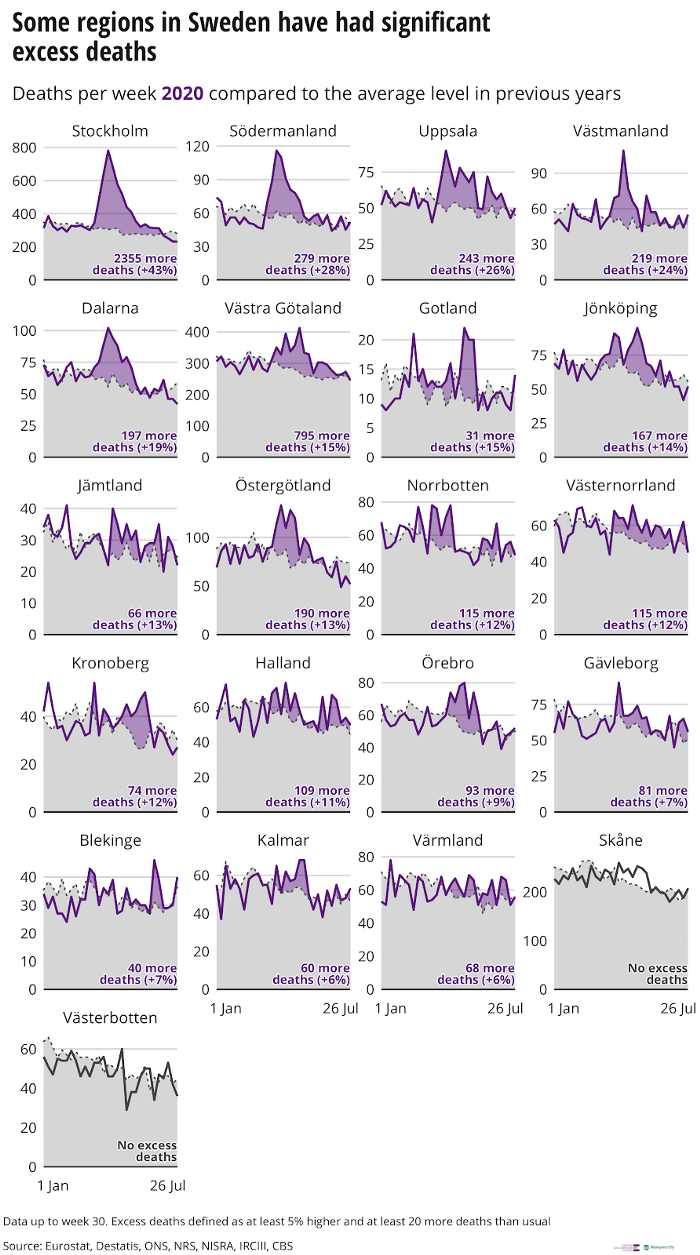 It is worth noting that all of these excess deaths are not necessarily related to COVID-19. In small regions coincidences may bump the death tolls. For example Gotland in Sweden has recorded 31 more deaths than usual (+15%), but only 6 officially COVID-19-related deaths , according to the Public Health Agency of Sweden.

What about the second wave?

Cases are rising again in many European countries, not least Spain, France, Belgium. Across the EU, new daily cases are higher than at any point since April. So why is this not visible in our data?

Comparing countries’ coronavirus figures is a tricky business: official case counts depend on how much testing is being done, and deaths from COVID-19 are counted in very different ways, and both are difficult to reliably compare across many countries.

As an indicator of COVID-19’s toll, excess deaths dodges many issues related to international comparability. However, this is also the slowest measure, with several weeks lag at best, which is why we only cover deaths that occurred up to July or the start of August. A spike occurring in new cases today won’t result in excess deaths for a number of weeks.

Our analysis is based on data showing daily or weekly all-cause deaths in each region, which has been collated from Eurostat and national statistical agencies (Scotland: NRS, Northern Ireland: NISRA, Germany: Destatis). A number of countries in Central and Eastern Europe have not reported any regional statistics on excess, so they are excluded from this analysis.

Countries have reported up to different weeks, and we have used the latest data available. This largely means up to mid-July or the beginning of August, but Italy and Poland, for instance, only have data available up to 28 June.

For most countries, the average period is 2015–2019. Others have fewer years of data available, but at least two full years have been used. We’ve used as granular data as possible, which is NUTS3-level for most countries. However, for Germany, Scotland and Northern Ireland, comparative data is only available at NUTS1-level.