Europe and the anti-establishment parties

In the run-up to the European elections, populists are gaining ground in many countries. But their slogans are not winning through everywhere. Where are they successful, and what makes them dangerous? 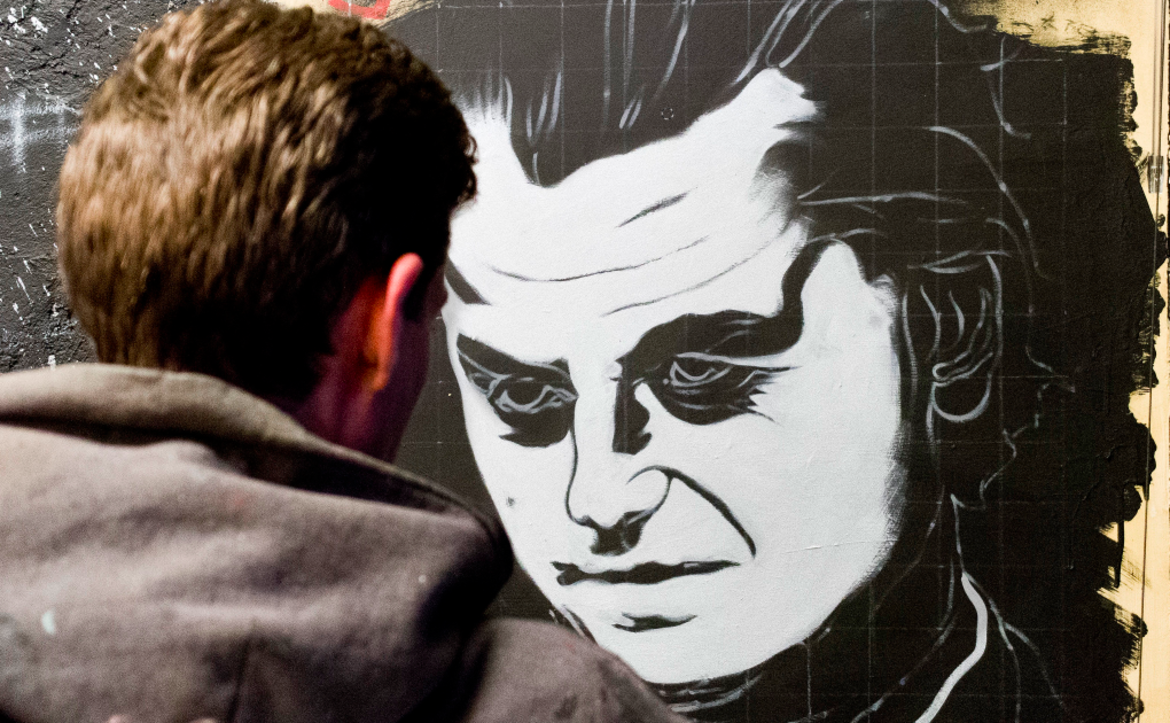 In many countries across Europe, populists, Eurosceptics, parties of the far left and the far right are celebrating success. Observers and opinion polls suggest that in next month’s European Parliament elections, too, right wing parties, for example, will make significant gains.

It is rare these days for traditional extremist parties to play much of a role, but in many countries the success of the populists more than makes up for this. When political scientists refer to populist parties, they mean parties that present themselves as alternatives to an establishment that does not reflect the will of the people.

Populism takes a number of different forms. Right-wing populists want a homogenous state for natives only. Left-wing populists reject capitalism. And centrist populists focus on curbing an allegedly corrupt elite: they have a less radical tendency to either left-wing or right-wing ideology, or may even reject both altogether.

The European Data Journalism Network has examined the development of anti-establishment parties in the 28 EU countries in more detail. Its starting point was their performance in national parliamentary elections over the last 20 years or so. These electoral results were then matched against The PopuList , a study set up last year by The Guardian, a British newspaper, in which more than 30 political scientists classified the various European parties according to their position on the populist and radical spectrum. 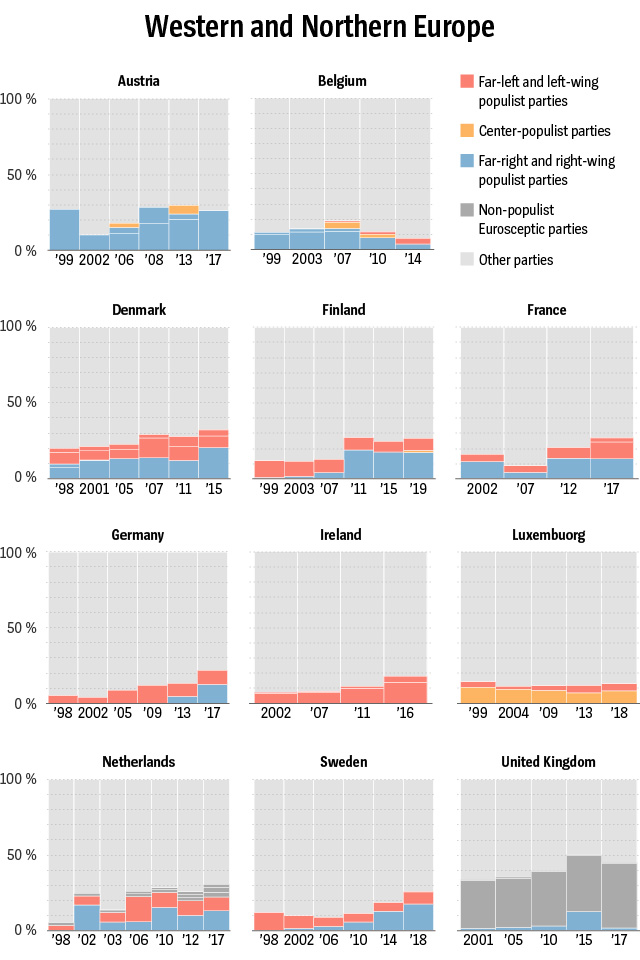 In several western and northern European countries right-wing populists have been an established feature of the party system for many years, be it the Danish People’s Party, Austrian government coalition partner the FPÖ, or Geert Wilders’ Freedom Party in the Netherlands. In France the vote share for Marine Le Pen’s Rassemblement National (formerly the Front National) may seem at first glance to be relatively small, but two years ago the party’s leader notoriously made it through to the final round of the presidential election.

In Finland the right-wing Finns Party has had a strong presence for the last ten years and came close to maintaining its position in the most recent election. In Sweden, too, the Sweden Democrats have been gaining ground for years, and even in Germany a right-wing populist party has managed to establish itself in the form of the AfD. And in Belgium, which is about to hold national parliamentary as well as European elections, polls point to a resurgence of the separatist Vlaams Belang party.

Both right- and left-wing populism almost always go hand in hand with scepticism about the European Union. Both reject, at least partially, European integration with its ever greater convergence and its transfer of national competences to the EU. But it is not only the populist parties that are Eurosceptic: even though the UK governing party, the Conservatives, has paved the way to the country’s exit from the EU, it is not considered a populist party by political scientists.

In southern Europe the populism is mostly of a left-wing kind. In Greece, Syriza gained a lot of ground after the start of the debt crisis in 2010, and since 2015 it has been in government. In Spain the left-wing protest party Podemos was set up in 2014, also as a result of the financial crisis. And in Portugal, the CDU (an electoral alliance between the Communists and the Greens) and the Marxist Bloco de Esquerda have been continually represented in parliament for the last two decades.

In Italy the radical right-wing party Lega Nord has been extremely successful recently. The country also has a strong tradition of centrist populism: Silvio Berlusconi’s party, The People of Freedom (formerly Forza Italia), has established itself as a centrist populist party with a conservative character, while the Five Star Movement is a populist party that has existed without either left- or right-wing ideology since 2009 and last year even made it into the government. 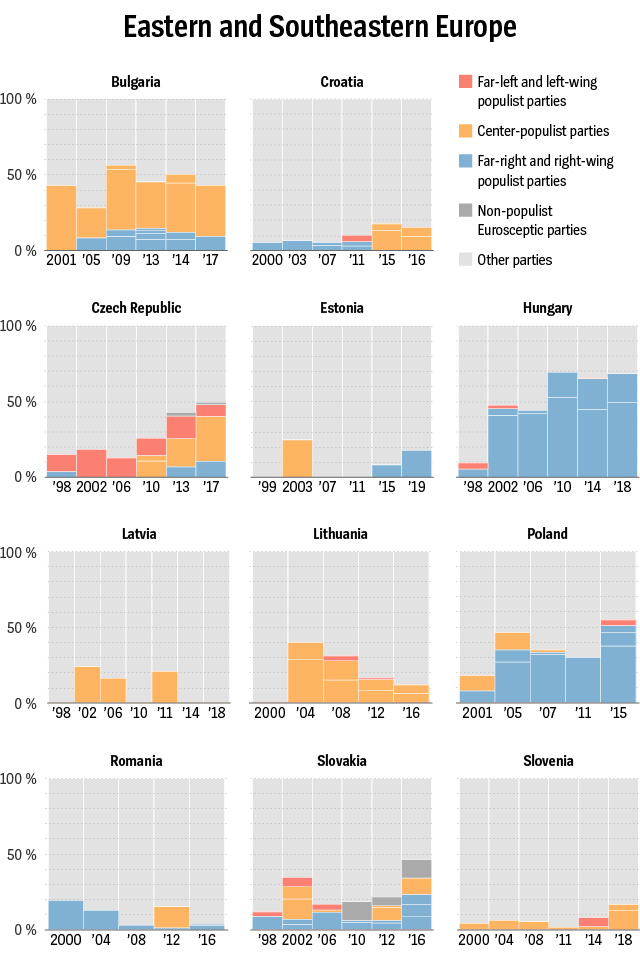 From the EU’s perspective, the least comfortable of the right-wing populist parties are in Hungary and Poland, where they have made it all the way to government. In Hungary Viktor Orbán’s Fidesz Party has dominated politics for many years now, and in Poland Jaroslaw Kaczynski has twice led his Law and Justice (PiS) Party into government, first in 2005 and then again in 2015.

Populists have not been successful all over Europe, however. In Malta no populist party has achieved electoral results worth mentioning for the last 20 years. In the UK, Luxembourg and Slovenia, populist parties’ vote share has been similarly modest, while in Lithuania and Romania it has been in decline.

So there is no uniform pattern. And yet, according to political scientist Sarah Engler, populism is now a Europe-wide phenomenon. Engler is conducting research into populism at the University of Zurich and the Aarau Centre for Democracy, and was actively involved in The PopuList project.

There are a whole range of explanations for the success of populist parties, says Engler. “Right-wing populists appeal to those who have been the losers from globalisation – those who have not benefited from economic and cultural openness and who hope that protectionism and closed borders will improve their chances in life.”

In southern and eastern European countries corruption scandals also meant that the populists’ anti-establishment slogans found fertile ground among voters. “And finally, in many countries the traditional mainstream parties have been losing their ability to retain voter loyalty, which has created electoral opportunities for new parties.”

The populists‘ demand that politics be conducted in the interests of the people does not at first sound unreasonable – what else should the people’s representatives be doing, after all? But populism goes further than this, explains Engler: “It assumes the existence of a unified will of the people, to which basic elements of liberal democracy, such as pluralism and protections for minorities, must be subordinated.”

She goes on to say that in some countries populists are openly challenging the separation of powers: “In Poland, for example, the governing Law and Justice Party is exerting greater and greater influence over the judiciary on the basis that the government knows what the people wants from the justice system.”