Why and how Bulgaria imports waste from other EU countries

Bulgarian companies import more and more garbage from abroad, but institutional weaknesses seem to offer some scope for circumventing the EU's strict environmental requirements. An investigation into this business. 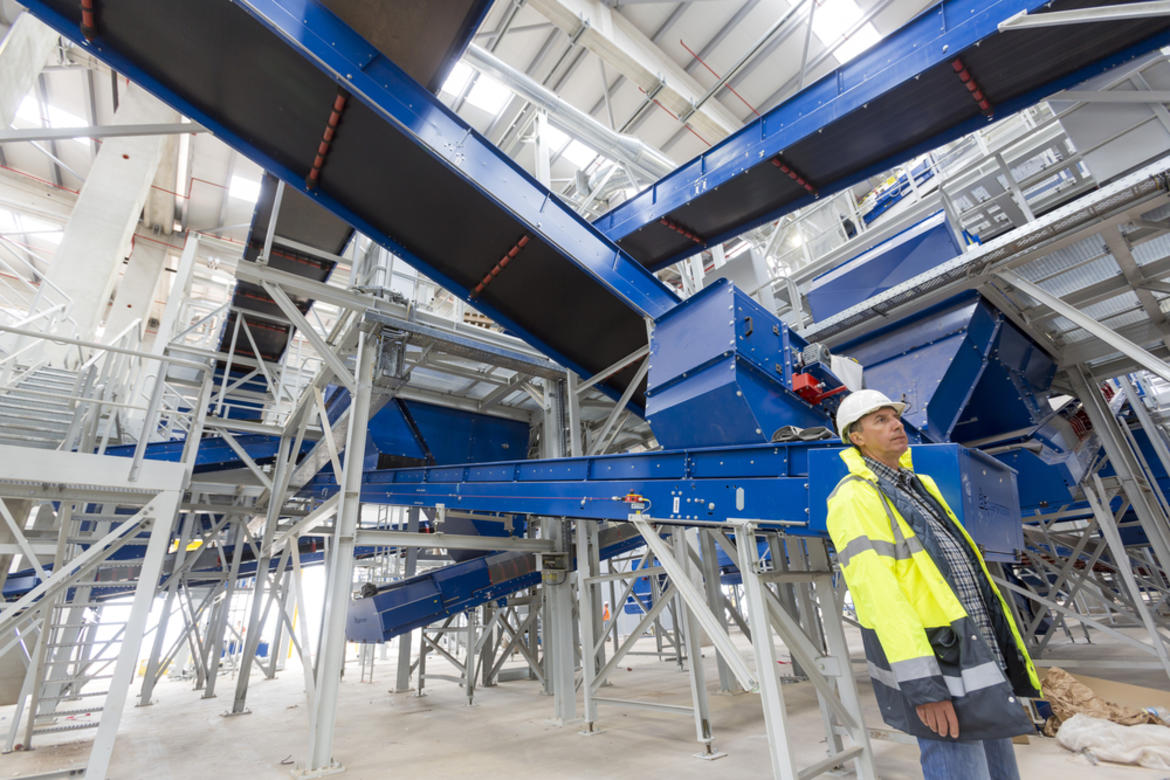 The logic of the operation is simple. If you live in a developed country, there are usually pretty strict environmental requirements about what to do with waste. Complying with them is expensive, and the temptation to send your garbage elsewhere, where they pay little attention to it, is great. In order not to turn developing countries into landfills, there are various restrictions – a ban on the export of hazardous waste from the OECD countries to those outside the rich club, a ban on export of landfill, etc.

However, Bulgaria seems to be one of the best available destinations for circumventing the rules in Europe. The country is part of the European Union, so the regime for trans-border shipments of waste from other EU member states is not that burdensome. In theory, the same rules apply as in other parts of the Union, but control by the authorities is weaker. This allows those who are involved in waste trade to realise a pleasant surplus profit: in selling the waste in Bulgaria they receive the same price per ton as if they sold it in other EU countries, but they don't have to invest in technologies to meet the same environmental requirements.

It is significant that from 2010 to 2017, the import of waste in Bulgaria has increased by almost five times. Initially, the country was a traditional importer of scrap metal, batteries and old batteries, but after 2013, deliveries from Italy and the United Kingdom of the so-called solid fuel based on waste – refuse-derived fuel (RDF) and solid recovered fuel (SRF) – increased considerably.

Although the big noise in Bulgaria nowadays is around Hristo Kovachki's thermal power plants (TPPs), the original idea of making money from foreign trash is not his idea indeed. Industry officials say the trail was paved by several companies affiliated with the recent Lukoil Bulgaria CEO Valentin Zlatev, who began contracting imports from southern Italy as early as 2014.

The subject is also covered by the Italian media, which informed about the first bales to leave the country in 2016, travelling to Bulgaria when approval was received from the Bulgarian authorities for 35,000 tons. According to the publications, a consortium of Italian companies De.Fi.Am and Ecobuilding won a €14 million contract from the municipality of Giugliano to dispose of its baled garbage. The said municipality signed a contract with the Bulgarian “Es Er Technologies” (Es Er Te) to ship the bales from Naples to Burgas, from where they were supposed to be sent to the waste treatment site of the company near the village of Bratovo. It is not entirely clear where the garbage was to be sent next.

According to the sources, the plan was to burn the waste mainly in the cement plant “Devnya Cement” and in the power plants owned by Hristo Kovachki in Sliven and Rousse. At one point, however, the cement plant refused to accept this rubbish, which was RDF according to the documents. In fact, it was partially separated rubbish and it had not undergone any special treatment that requires drying. An agreement was not reached with Hristo Kovachki either. However, the suspicions in the industry's relevant branch hint that it was at this time that Kovachki saw the potential of the business and began to import garbage himself, while Valentin Zlatev gave up this business.

The fate of Zlatev's Italian bales is not completely clear – according to Italian media, the contract with Bulgaria collapsed and the flow of garbage now goes to Portugal, which accorded the necessary regulatory approvals. Anyway, the conflict of De.Fi.Am with Es Er Te is also visible in the accounts of the latter. They indicate that the Italian company filed a lawsuit in Italy against the Bulgarian company for outstanding commitments and damage to reputation in 2017. The claims amount to €1.18 million. The case was terminated in 2018 as the contracts between the two companies contained an arbitration clause for disputes in Bulgaria. Therefore, Es Er Technologies is bringing a case before the Sofia Arbitration Court against De.Fi.Am, in turn claiming that there are receivables due for €494,000 plus interest of €29,000.

The "Es Er Technologies" company was initially established under the name "Vi Ey Pi" in 2012. Relations with Valentin Zlatev emerged around 2014, when Asen Naydenov, who is in the management of the Cypriot company “Agriway Holdings Limited”, acquired a 30 per cent stake. Meanwhile, Zlatev officially declared himself as the owner of a hotel business. The other partners in Es Er Te were “Vi Pi Commodity Trading”, a company of Julian Prodanov (the share was initially owned by his brother Vasil), and the Greek citizen Konstantinos Sukos.

In 2018, the registered office of the company was changed to 67A Postoyanstvo Street in Sofia, which is the headquarters of all well-known companies of the said businessperson Valentin Zlatev, such as "Agrohold" and "Terra tour service".

Shortly after Asen Naydenov's entry, the business of Es Er Te prospered. In 2015, the company won a public procurement contract entitled "Testing of innovative technologies for treatment and utilisation of municipal waste in different modes of operations" for the municipality of Burgas for BGN 14.55 million. According to the investment proposal, a plant capable of processing 180,000 tons of waste was to be built, but the facility turned out to be a complete failure and it is not working as planned.

However, through this contract the “Es Er Technologies” company acquires a terrain for use in the Bratovo landfill. In the following years, the company also won five-year contracts in consortium with other companies to act as landfill operators in Stara Zagora and Pazardzhik. According to the 2018 company report of Es Er Te, it is envisaged to install an Italian mobile system for pre-treatment of municipal solid waste with a capacity up to 200,000 tons in Stara Zagora this year. The company is also a partner of the Bulgarian Ministry of Environment and Water under the European Commission “LIFE – BULRECE” program. Within the project, the company will have to apply an "innovative method of reducing landfill" in an area of 335,516 square meters (old landfills being subject to re-cultivation).

In parallel with the 2014 breakthroughs made by the “Es Er Technologies” company, a change occurred in another company affiliated with it – the “Vi Pi EcoSolutions” company. Founded in 2013, it was originally the sole property of the “Vi Pi Commodity Trading” company and of its manager is Nikola Nitov – a former mayor of the town of Pravets (2009-12) and head of the local structure of GERB, the ruling political party in Bulgaria. In 2014, Nitov himself acquired a 60 per cent stake of the company, and a year later transferred it to the aforementioned businessman Asen Naydenov. Vi Pi EcoSolutions is supposed to remove the dangerous trichloroethane from the site of the bankrupt Polimeri plant near the town of Devnya, for BGN 15 million. Capital's editorial board tried to contact the CEO of Vi Pi EcoSolutions, Petya Tomova, but she did not respond on the mobile phone number specified for communication.

Interesting persons are also included in these companies’ management. Anton Pavlov, who until 2014 was the Chief Power Engineer of Lukoil Bulgaria, is now the managing director of Es Er Te and one of the subsidiaries of Vi Pi EcoSolutions. He was deputy minister of Energy in Boyko Borisov's second government and a member of the Bulgarian Energy Holding (BEH) board. At the end of October 2015, he was dismissed from office and shortly thereafter took over the said waste management company in 2016.

Prior to him in 2014, for a short period, the manager of the “Es Er Technologies” company was Krasimir Zhivkov, who was also the mayor of the town of Pravets (2003-09). From 2009 to 2013, he was governor of the Sofia region. He left the company at the end of 2014 to become the deputy minister of Environment and Waters, which is the case until now.

From the answers given by Hristo Kovachki's thermal power plant in Sliven to Capital, it is clear that the plant receives RDF from Italy through the EcoExport company. This is the same company that was quoted in an article by Bivol from late August as a waste supplier to the “Bobov Dol” thermal power plant, also owned by Kovachki. The information was subsequently confirmed by the plant itself in a letter to an online publication. According to the letter, the Bulgarian Ministry of Environment and Water released its permission in March 2019, and the last delivery by sea took place in June 2019. Probably the same company supplies waste to other plants owned by Kovachki.

EcoExport is managed by Italian Sergio Gotz, who is affiliated with another company, Eco Valsabbia. The latter is mentioned in a report from a committee of the Parliament of Saxony, which examined abuses in the import of waste from Italy to Germany through forged documents that conceal the true content of shipped garbage.

Another company that is now involved in the import of waste to Bulgaria is Ludon Trans. It is owned by Nelly Mladjova – the daughter of Nikolay Mladjov, who owns “Zet & Em private Co.”, and last summer received personally from Prime Minister Boyko Borisov the Grand Prize of Confederation of Employers and Industrialists in Bulgaria for the quality of the bales. The company told Capital that they are mainly importing RDF from the UK for cement plants. Ludon Trans only carries out the transportation by sea and arranges the accompanying documents for the garbage, but does not have its own installations in Bulgaria, says the company, explaining that the imported waste is visually different from the one seen on many photos of the power plants related to Hristo Kovachki.