The risks and opportunities of “remote democracy”

In recent months, Covid-19 has put Western democracies to the test. In the larger European countries, the space for democratic deliberation has been greatly reduced. In this regard, new technologies represent a major opportunity. 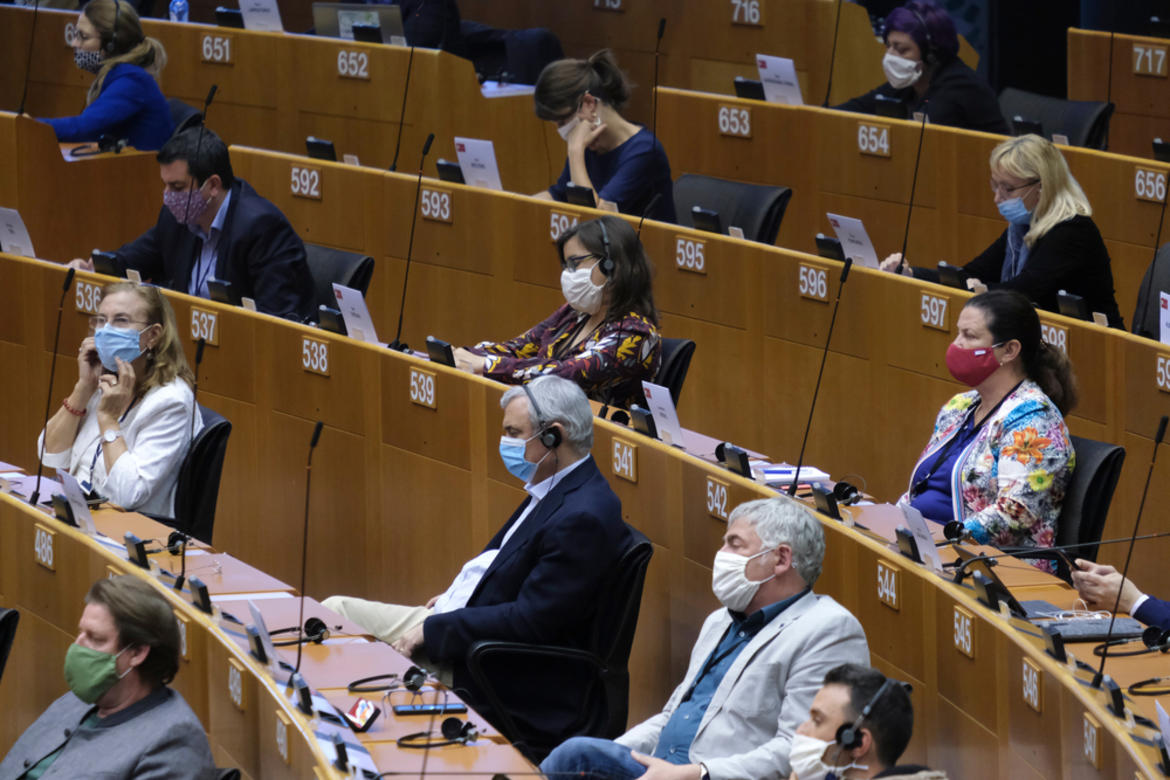 The health crisis caused by Covid-19 has forced countries across the world to impose extraordinary measures. Many such measures involve the limitation of certain fundamental civil rights, such as freedom of movement and association. The need to rapidly deal with the pandemic has also placed considerable power in the hands of a small number of people, with governments assuming the leading role.

At the same time, parliamentary activity has fallen dramatically, not just because of the time required to resolve such democratic challenges, but also to ensure the safety of politicians. This situation has only exacerbated a trend that was already under way in Europe, namely the absolute centrality of governments, with parliaments relegated to a secondary role.

Such a trend represents a serious danger to democracy, which could emerge much weaker from the current crisis. However, new technologies may provide an important opportunity, not just to guarantee the continued functioning of democratic institutions, but also to improve their efficiency – as demonstrated by both the European and Spanish Parliaments.

How European countries have responded to the pandemic

In the majority of cases extraordinary measures led to activating a normative framework that strengthened the power of governments. Below, we try to understand how some of the larger EU member states – France, Germany, Spain and Italy – have responded to this crisis in this respect.

In Italy on January 31, 2020 a state of emergency was declared. This was not determined by the Constitution, but rather ordinary law. It was therefore necessary to issue a large number of laws in order to allow various parties to manage the pandemic as efficiently as possible.

While we have already analysed some of the crucial issues in this regard, we should recall that under these conditions significant power is concentrated in the hands of the government, with restrictions loosened in terms of transparency and accountability.

Indeed, many of the measures adopted, including those limiting civil liberties, did not pass through Parliament, since they were contained in administrative acts rather than laws. Of the over 400 acts issued up to now in response to the crisis in Italy, only 12 of them (less than 3 percent) directly involved the Parliament.

In contrast, similar conditions are regulated by the constitution in Spain and France . In both countries it was decided to adopt the least restrictive possible measures. In Spain, whose Constitution provides for three different kinds of emergency, it was decided to adopt the least strict one, namely a state of alert . This was suspended on June 21 but, with the second wave, was reapplied until May 9, 2021.

In France, it was decided not to enact what was provided for by the Constitution, because it was deemed too restrictive on civil liberties. Instead the government enacted a state of public health emergency, which will remain in force until at least February 16, 2021.

Contrary to the aforementioned countries, Germany decided not to declare a state of emergency at the national level, even though this was provided for in the Constitution . This is because the adoption of such measures is always a controversial matter in Germany. It was thus decided to act in accordance with the law against epidemics , approved in 2001, thanks to which the government can impose measures such as social distancing and cancelling public events.

We should recall, however, that Germany is a federal state where 16 Länder occupy a governing role. Every measure affecting the entire national territory therefore has to be agreed upon at both levels of government. This obliged the central government to search for compromises. For this reason too the new lockdown requested by chancellor Angela Merkel had to receive the green light from governors. The decision, in any case, was virtually inevitable after the measures adopted in November 2020, softer than the more hardline demands of the chancellor – precisely due to the will of the governors – proved ineffective.

How the Italian, French and German parliaments managed the crisis

As we have said, in recent months parliamentary prerogatives have been significantly reduced. However, ensuring the continued functioning of Parliament is obviously extremely important. Not only because it is the country’s principal representative body, but also because, as a core element of democratic governance, it represents a fundamental condition of legality, transparency and civil protection. But how well were European parliaments prepared to respond to health crises?

In Italy, the coronavirus first struck Parliament on March 4 when a deputy from the red zone of Codogno requested participating in Parliament remotely. This request was immediately rejected , based on article 64 of the Constitution which – if interpreted to the letter – requires the physical presence of MPs.

Thus it was decided to reschedule sittings with the exception of urgent projects which could not be postponed (such as renewing expiring decrees), consultations, and summons.

An informal agreement was also reached overseeing the reduction of the maximum capacity of the House of Parliament by 55 percent. However, this agreement was only respected during the most acute phase of the crisis. Voting was then performed by roll call on a staggered timetable. In addition, parliamentary sessions left ample time for frequent breaks for ventilation and sanitation.

Finally, new locations were established to allow the Parliament to participate in sessions while practicing social distancing. The only case where the Italian parliament allowed remote participation was for informal committee hearings (thus, without accountability).

As with Italy, France and Germany also rejected the possibility of remote voting, though the paths taken to guarantee the continued functioning of Parliament were different.

A characteristic element of the French experience was voting by proxy. With a broad interpretation of an instrument contained in article 62 , it was decided to limit access to the house to just three members for each parliamentary group: the leader and two other deputies.

This decision conferred significant power to a small circle of parliamentarians. While certain safeguards were established (for example, deputies can express their disagreement with decisions taken), the presence of representatives has clearly been significantly reduced. It is enough to consider the case of Emmanuel Macron’s party – La République en Marche – where just three deputies represented 47 percent of the votes.

To this we have to add that the French government has often relied on a fast-track procedure allowing one reading for each sitting of a bill and, in the absence of agreement, the formation of a special committee to reach a joint draft. This is what occurred with law 2020-734 , which laid down urgent measures to deal with the health crisis.

In Germany the legally required number of representatives was reduced by a quarter in both assemblies and committees. At the same time, the number of ballot boxes for votes available in various areas of the house was increased, while more time was also allocated to voting. Remote voting was only allowed for committees, and only as a last resort.

These two solutions, as we have seen, raise crucial questions: in both cases decisions are delegated by a restricted number of representatives. Such solutions could not be adopted in Italy due to the Constitution requiring that votes be individual , and that decisions be taken in the presence of the majority of representatives .

Remote voting in the European and Spanish parliaments

Let's now look at two cases where new technologies were used to their full advantage. In March 2020 the Spanish Parliament enabled remote voting thanks to a broad interpretation of article 82 , which provided for this possibility in cases of serious illness. On this basis, on March 25, 2020 assemblies and committees, group leader conferences and all activities involving technical and political governance, were done remotely.

To guarantee the validity of the vote, the law requires that before beginning the sitting the president or a member of their office must be informed by phone of deputies’ voting intentions, while deputies must also digitally sign their ballots. As the crisis calmed during the summer months, some deputies returned to the House of Parliament, but many others preferred to continue voting remotely. More than 600 votes were taken with this method between March and November, with peaks of more than 200 per month in July and November.

Over the same period the European Parliament chose to continue its work remotely. This was also due to the difficulty of having representatives from various European countries come to Brussels and Strasbourg. Thus, from March 26, 2020 onwards, sessions were held via streaming, making it possible for MEPs to participate and vote remotely.

One of the main dangers linked with remote voting is the risk of tampering. For this reason, as in the case of the Spanish Parliament, a strict protocol was adopted: at their official mailing address deputies receive a ballot which must be filled, signed and sent to the House of Parliament. Only votes that fulfill these requirements are counted. This solution has allowed the European Parliament to perform a grand total of 4,378 votes between March and November 2020.

The case of the Spanish and European parliaments show us that new technologies can contribute to the improvement of western democratic systems.

Another concrete example comes from Italy. On December 7, 2020, during a cabinet sitting, Minister of the Interior Luciana Lamorgese became aware of having tested positive for Covid-19. Subsequently, Lamorgese discovered that it was in fact a “false positive ”, but this did not prevent repercussions for Parliament. Firstly, meetings were suspended and two important government members were forced to self-isolate: Minister of Foreign Affairs Luigi di Maio and Minister of Justice Alfonso Bonafede.

Insofar as a positive test for Covid-19 does not necessarily entail complete government paralysis, it does represent a further obstacle when maximum efficiency is of the utmost importance. Such disruptions can be avoided with the help of technology. The cabinet engages its members for more than ten hours per month on average. Where so many are obliged to meet to talk at close quarters, the risk of contagion is high.

The risks and opportunities of remote democracy

Covid-19 has clearly put western democracies to the test, exposing even further the structural flaws which have characterised them for so long already. The real risk, however, is emerging from this crisis in a state of weakened democracy, where citizens are willing to renounce specific protections for greater security and efficiency.

In this regard, the role of supervisory institutions – above all parliaments – was perceived more as an obstacle than as a pillar of democracy. It is precisely in exceptional circumstances such as these that parliaments should perform a fundamental role in guaranteeing the rights of citizens. Technology can provide essential assistance here. Obviously the opportunities offered by new means of communication present risks such as data theft or vote tampering, but these problems can always be avoided with sufficient oversight.