The “irresponsible” reliance of European Big pharma on China

The COVID-19 outbreak has revived fears over acute drug shortages in Europe, sparking calls to repatriate the production of pharmaceutical ingredients from China. But rebuilding capacity would take years, if it were even possible. 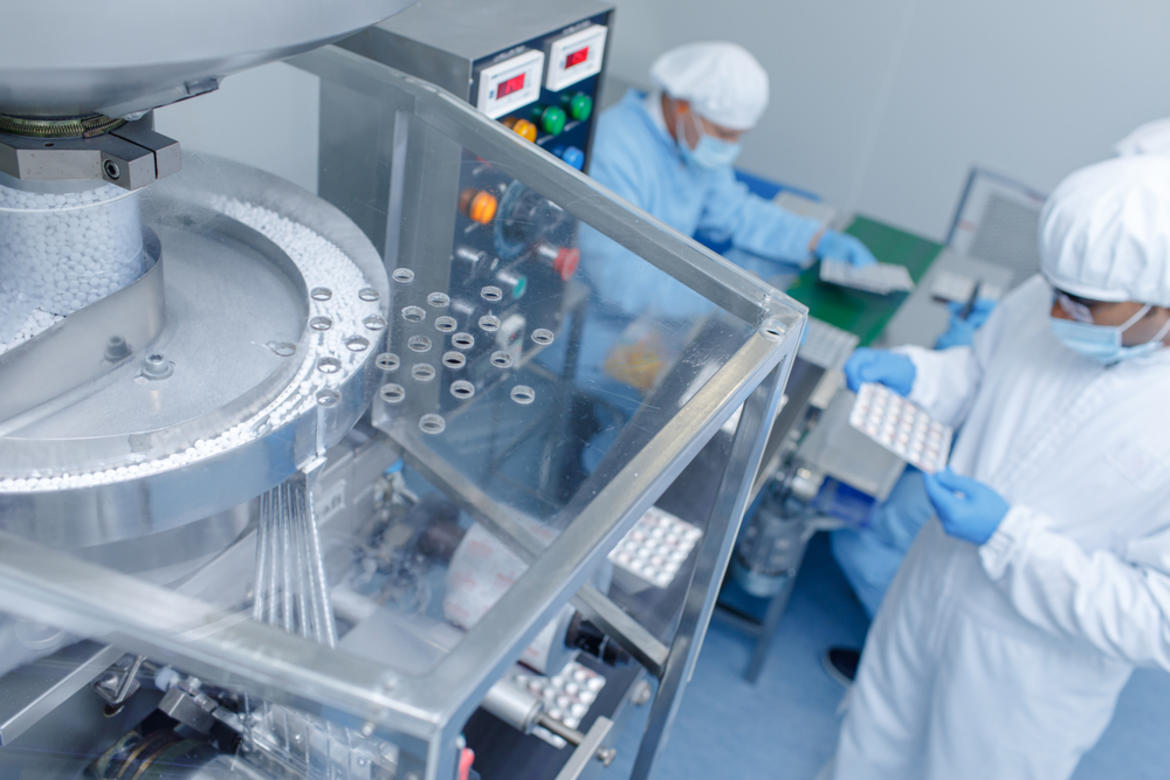 All it takes is the flap of a butterfly’s wings somewhere in Asia - or the dry cough and fever of a lone worker on an assembly line in Zhejiang province, eastern China - for the global supply chain to grind to a halt. Millions of Europeans will then be deprived of smartphones, suitcases, tuxedos, shoes and underwear, stuffed toys, piggy banks...And, more worrisomely: meds.

Given Europe’s over-reliance on the “factory of the world”, there is little doubt that the safe, sustainable supply of essential medicines is now in jeopardy.

Interestingly, it’s not the new, more costly drugs that are the most vulnerable. “Those rarely go out-of-stock”, notes Jean-Paul Vernant, a prominent oncologist at La Pitié-Salpétrière in Paris.

It is the generics — the cheaper equivalents to off-patent originals, which play a critical role in ensuring access to quality healthcare across Europe — that are in trouble.

There are several accepted reasons for this. One is the choice, by European big pharma, racing for profitability over the last 30 years, to massively outsource from China off-patent so-called active pharmaceutical ingredients (APIs) — the chemical building blocks that give drugs their therapeutic effects.

Widely used antibiotics, like amoxicillin; painkillers like aspirin and paracetamol; vaccines against hepatitis B; even life-sustaining drugs to treat cancer, like busulfan and zolendric acid - all been regularly at risk.

In France, 538 medicines of “major therapeutic interest” faced shortages at some point in 2017, according to the National Drug Agency. A twelve-fold increase over 10 years. In the Netherlands there were 2044 reports of impending or actual shortages during the first half of 2019 alone, up from 1390 for the whole previous year. Patients were forced to make do with either no medicine or less effective ones.

In China things occasionally go wrong quickly. Examples include the forced closure by the government of 150 facilities due to environmental concerns between 2016 and 2018, and major safety scandals like the heparin case in 2008.

The latest horror story to date is valsartan, a common blood pressure medication. This was found to contain nitrosamine, a cancer-causing chemical (usually used to make liquid rocket fuel). The outcry sparked a global recall of the products in July 2018.

In such a context, the COVID-19 outbreak is only the latest scares in a litany of fiascos and disasters. On this occasion production lines of APIs in the coastal industrialized regions of China have been disrupted, leading to shortages of raw material in India, which in turn specializes in the export of the finished formulations.

For France’s finance minister Bruno Lemaire, however, this new episode is a “game changer”. In the wake of the epidemic, he is calling for a rethink of globalization, describing Europe’s over-reliance on China as “irresponsible and unreasonable”. This is an extraordinary statement from a formerly enthusiastic advocate of free and unbridled competition.

It is time to tackle the root of the issue, concurs Christoph Stoller, the president of Medicines for Europe, which represents the generics industry. It is no longer enough simply to make do with half-measures, such as stepping up on-site inspections by the EMA*, or ensuring (for critical products at least) that supply chains aren’t vulnerable to a single point of failure (which can prove impossible anyway, since some ingredients are made by a single certified plant in China).

It is time, in other words, to repatriate the production of essential APIs to Europe.

Paradoxically, such a shift has been timidly under way since around 2013. Due to political uncertainties in Asia, and recurrent safety scandals as mentioned, big pharma has increasingly been looking back to Europe for more secure, high-quality suppliers in Europe.

But this mostly concerns Highly Potent Active Pharmaceutical Ingredients (HPAPIs), among other lucrative compounds, in a new generation of drugs requiring smaller dosage. For these APIs account for roughly 10% of the cost — against up to 40% in generics — finds a study by the French Ministry of Economy and Finance.

Sanofi, for instance, may have plans to ramp up its APIs output in the EU, by combining, into a stand-alone entity, sites in Italy, Germany, the UK, France and Hungary. It is hoping to become a major player by 2022. But it is unclear whether— and perhaps unlikely that — this will include the production of those high-volume, low-margin ingredients which are necessary for the fabrication of off-patent, less profitable, yet nonetheless critical medicines.

In its messy situation Europe is not alone.  In the US, 80% of antibiotics come from China, states the Commerce Department. These include  95% of ibuprofen, 91% of hydrocortisone and 45% of penicillin.

In spite of President Trump’s threat to slap tariffs on a variety of Chinese imports,  medical supplies have not so far fallen under the same scrutiny. In effect this has left APIs outside the bilateral trade war.

India, dubbed “the pharmacy of the world” due to its leading role in the export of finished products — and which, like Europe, made most of its pharmaceutical ingredients locally before joining the WTO in 1995 — is now 70% reliant on Chinese APIs, Registered Starting Material (RSMs) and intermediaries, according to the Directorate General of Commercial Intelligence & Statistics.

Over the last five years India’s efforts at public investments and guaranteed purchasing agreements (of local output from the state) have yielded little or no result. This is because, while India may “enjoy” comparable labor costs with China, on APIs there still exists a significant price differential between them. China’s main strength, as with other industrial sectors, lies in its huge, incomparable scale.

Over the past 20 years China has built a formidable API manufacturing arsenal, running at 70% of its capacity (against 30-40% for India). This has allowed for prices 30% to 40% lower than the global average, despite an increase in labor costs and the recent implementation of more stringent environmental norms.

Chinese manufacturers are blessed with a variety of climates, which allows for the production of a broad range of raw ingredients (between 1500 and 2000 types).They also benefit from generous subsidies from the state, and bank support in the form of loans at negligible interest rates. For instance, Zhejiang Huahai Pharmaceutical (ZHP), the leading producer of components used in blood pressure and Alzheimer’s medications, received $44.4 million in state funding in 2018, according to the company’s annual report.

Together with intermediaries, China’s total output reached 9.5 million tons (2.5 for APIs alone) in 2019, of which 1.9 million went to Europe. Exports have grown by 3.8% on average over the last few years, to a value of around $30 billion. And the trend looks likely to continue, since €160 billion worth of patented molecules are set to fall into the public domain between 2020 and 2024.

Europe faces a conundrum. It is at a disadvantage on labor cost, compared to India, and its drug market has a price structure of its that, some claim, prohibits cost-efficient production. So how could it possibly relocate generic API manufacturing without causing a surge in prices or draining laboratories of innovation funds?

For the Roosevelt Institute, an American think tank based in New York, the conundrum is easily resolved: the problem lies elsewhere. It is one of profits over patients. At a time when pharmaceutical firms are generating record profits, resources are largely being allocated to shareholders and executives, at the expense of productive investments. 7 of the 10 big pharma companies in the US, finds its report , spent over 100% of their profits on rewarding shareholders. These included AbbVie (318%), Eli Lilly (202%), Merck (232%), and Pfizer (182%).

Either way, without a long term comprehensive approach at the European level to spur investments, emulate R&D in critical raw materials, and fast-track the approval for alternate ingredients, Europe is unlikely to recover its independence. This was the finding of a briefing paper by EFCG, the European APIs manufacturers’ lobby group in Brussels.

And this would take time. Two years are needed to transfer a single product to an existing manufacturing site, according to experts in the field.This includes the scale-up, validation and stability protocols and regulatory filings, and it requires an army of technical staff. Five years are required to design, build and qualify a greenfield facility from scratch.

Yet hope remains. In the US, faced with shortages and high prices, 900 hospitals decided in 2018 to combine forces and launch Civica RX, a nonprofit generics company. It delivered its first batch of vancomycin hydrochloride, an injectable antibiotic, in late 2019 and is now partnering with Danish company Xellia and London-based Hikima to manufacture 14 other essentials medications.

The initiative is reproducible – including here, in the EU – and has been making waves across the industry. “There are clearly players in the marketplace who are nervous about what we're doing", notes Martin Van Trieste, CEO at Civica.