The geography of EU dissatisfaction

A research team analyzed with extraordinary thoroughness who voted against deepening integration in the European Union and why. The results of more than 63,000 polling stations were examined by looking at the latest national election results and data. 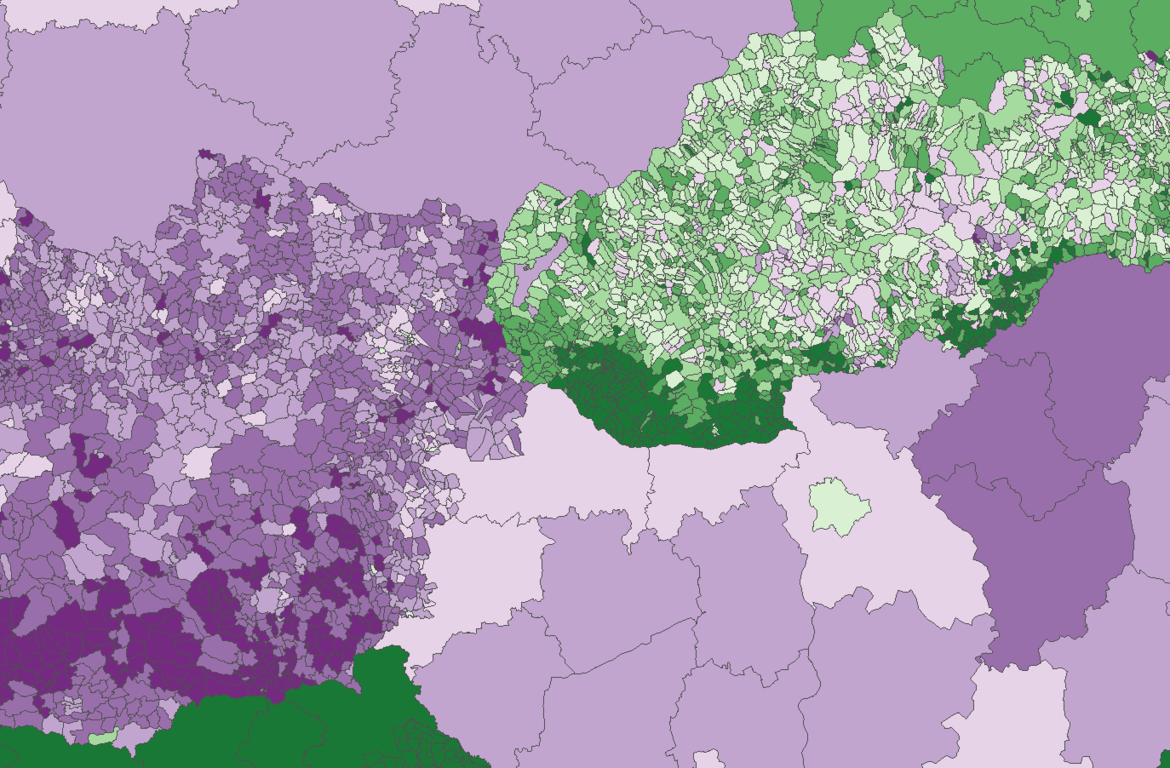 Image: The geography of EU discontent

In the wake of Brexit researchers began to investigate what could lead citizens of a member state to cast themselves out of the EU, and they came to a conclusion: it could happen elsewhere too. In 2016, the British public opinion was not so much against the European Union. In fact, around the same time the EU had a greater refusal rate in seven other member states than in the United Kingdom.

All this can be integrated into a process that shows the increase in popularity for parties campaigning against European integration. Between 2000 and 2018, support for strongly anti-integration parties at EU level increased from 10 to 18 percent, while those parties that are more moderate but are still against deeper integration expanded their voting base from 15 to 26 percent. In 2004, when the large Eastern enlargement took place, only 28 percent of the population did not trust the EU. This rate rose to 47 percent by 2012, and then fell to 39 percent by 2018. In this period, mistrust in the EU grew in nine member states by at least 20 percent. In Greece – obviously partly thanks to the economic crisis – this increase was 48 percentage points high, and two-thirds of Greeks still do not trust the EU. Denmark is at the other end of the spectrum.

Recently, at the request of the Directorate-General for Regional Policy of the European Commission, a comprehensive study was carried out , which came up with the geography of EU dissatisfaction from the election data of recent years. A total of more than 63,000 constituencies were analysed in the research. The election results of the parties were categorized according to the extent to which a party's rhetoric could be considered anti-integration, and they were measured against the number of votes cast for the party. 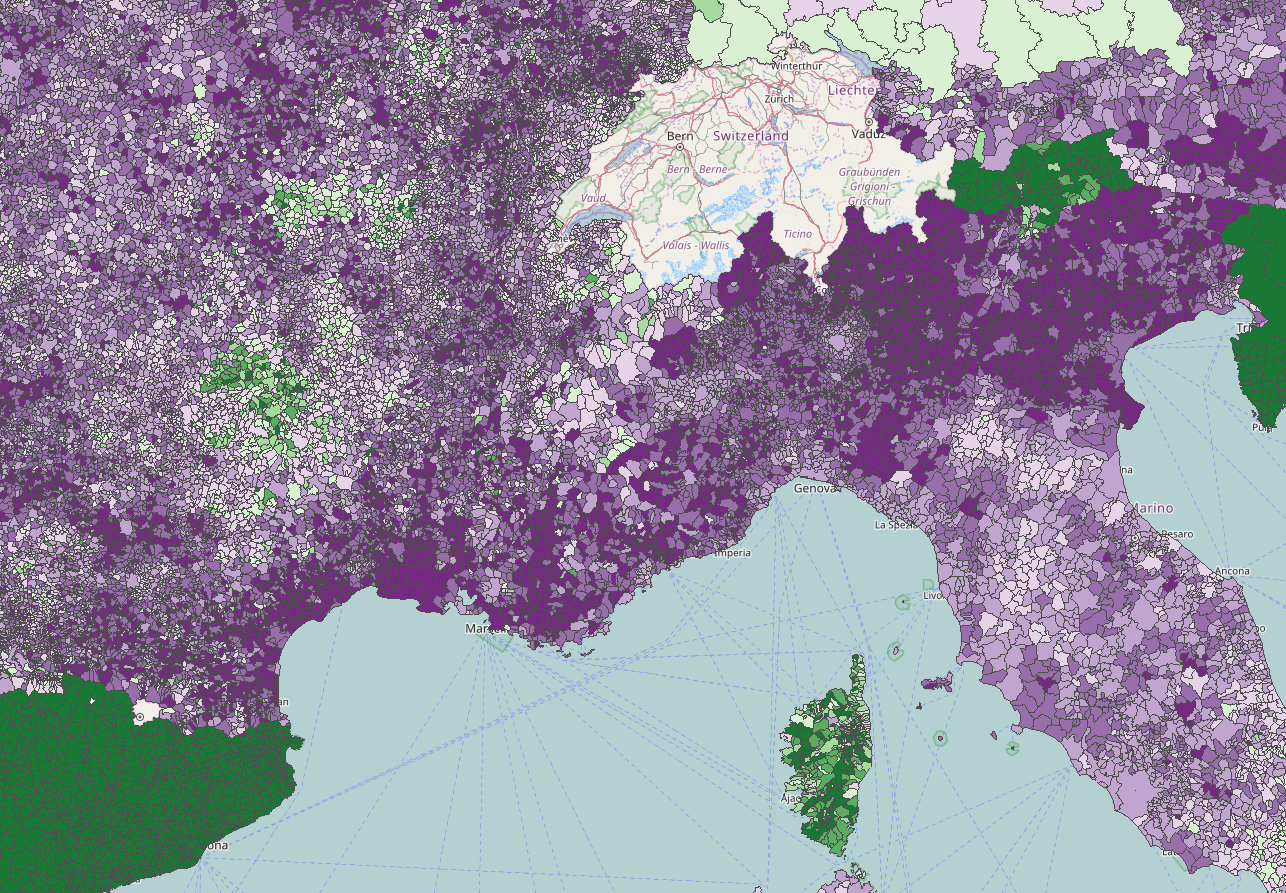 By clicking on the image you can access and explore the interactive map of European constituencies
published by the European Commission.

As far as the European scene is concerned, parties that strongly oppose integration acquired at least 25 percent of the votes in three countries: Austria, Denmark and France. However, when researchers look at parties opposing integration to some extent – and here Hungary’s ruling Fidesz party was included – the figures show that more than half of the voters were against stronger EU cooperation in four countries: Greece, Hungary, the United Kingdom, and Italy. On the contrary, this phenomenon is almost unknown in Croatia or in the Baltic States, where less than 5 percent of the votes were cast for these parties.

Thanks to the granularity of the analysis, we also know the regions where the EU is strongly opposed. These regions include: southern Denmark, northern Italy, southern Austria, eastern Germany, eastern Hungary and southern Portugal. In fact, if we take the moderately eurosceptic parties into account, then Greece, Hungary and Italy almost entirely fall into this category.

One of the charts shows very clearly that while only 37 percent of Hungarians do not trust the EU, 65 percent of them voted for a party that in some form opposes further integration – this is the highest rate in the European Union.
Several studies have already been carried out on how to identify anti-EU, populist, and EU skeptic parties – all these concepts are generally used to describe those who oppose deeper integration in the EU. They share a similar rhetoric, as they see themselves as representing the “people” who revolt against the “elite”. To reinforce this, populist parties often use the term “us” against “those,” “them” or “others”. Whether the party is on the right or left, a campaign against “faceless Brussels bureaucrats” is a recurring theme. The euro is also a common target. Based on the results of the recent national elections, heavily populist parties received 9 percent of the votes at the European level. If we add the parties that are to a lesser extent, but still populists, the rate increases to 23 percent.

Research to date has provided a fairly schematic picture of voters of the populist parties. Older, lower-educated and low income people have been identified. They have usually been left behind by the modern economy and are unable to identify with a liberal, multicultural worldview. Researchers stress that formal education is one of the factors behind voting against the current status quo. And, of course, there is the threat of migration in the populist toolbox, which – through mass immigration and ethnic change in social composition – is believed to threaten with a loss of jobs. Concern about economic uncertainty meets cultural fears.

To sum up, the study has identified seven conditions as a potential source of voting against EU integration. These are: population density, distance from the capital, economic situation (GDP/person), employment rate, age, education, net migration (this refers to the number of people moving in and out of the region).

The results of the research confirm the main hypotheses, but not all of them. Inhabitants of areas where above-average economic growth over the long term has happened, are less likely to vote in favor of parties opposing EU integration. Those parties are more likely to be supported by people living in regions with lower population density. However, ageing and net migration are much less important than the economic downturn. It also appears that votes against the status quo are by no means linked to regions with poorer inhabitants. In fact, richer regions are more likely to vote for populist parties. The research has also shown that residents of areas closer to the capital are more likely to vote against integration.

To sum up: populists can hope for more voters where there is a relative economic downturn, lower education, less job opportunities, lower per capita GDP, and richer regions are more likely to vote for Eurosceptics than the poor. Migration is not that important of an issue when it comes to voting, as the populist parties want to suggest. Regions with higher population inflows than outflows are less anti-European. There is an important circumstance that could explain the peculiar Hungarian case: parties that, to a greater or lesser extent, are opposed to European integration can expect a significant number of votes from people opposing migration. And there is one more interesting outcome: older people are not anti-integration at all.

Based on the above, the study’s authors suggest to the EU to try to deal with territorial problems: regions that are particularly affected by the decline in industrial production and brain drain, and focus on the financial trap of the middle class, which means that they cannot progress in their lives. These are some of the main bases for dissatisfaction with the EU, which not only threatens European integration, but also economic, social and political stability, and the peace and prosperity preserved thanks to the EU for the longest period in the history of the continent.