Social media advertising: more than half a million euro spent on the European elections

Parties and candidates are spending increasing amounts on online political advertising. The situation can no longer be ignored, but the Parliament is yet to intervene. 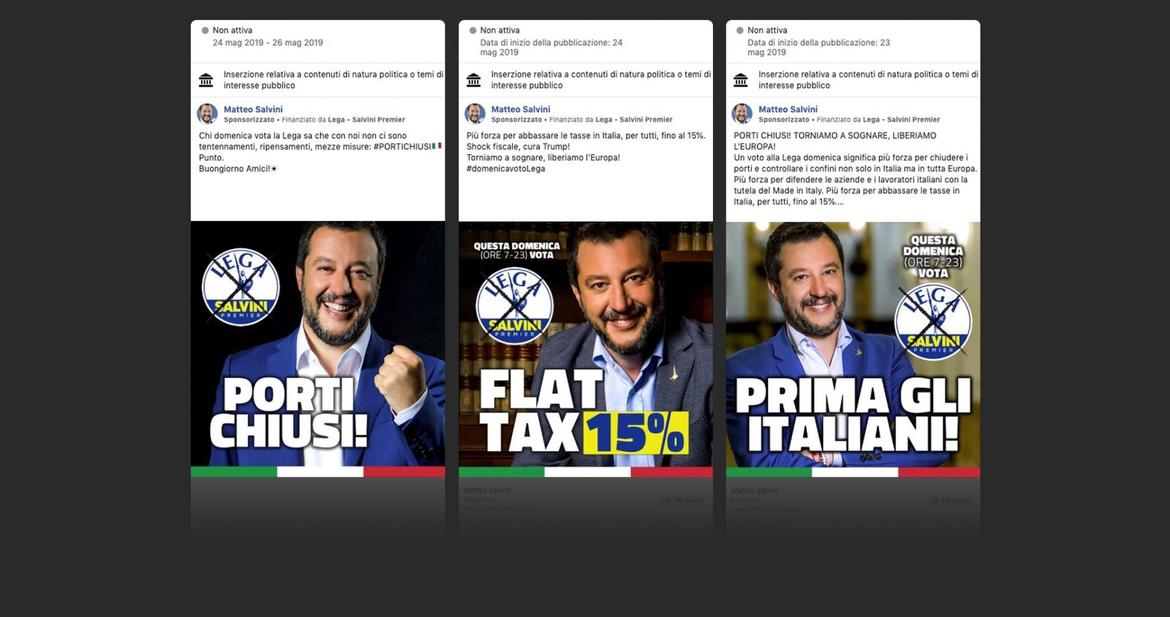 The role played by the internet and social networks in recent elections has been growing constantly. Nevertheless, this increasingly deciding factor still lacks any concrete national regulations.

This is the case, for example, in Italy, where the current rules for electoral advertising still haven’t been extended to online political advertising, especially on social media. The problem can no longer be ignored. Thanks to the self-regulation tools made available by Facebook, Google and Twitter for recent elections, it is possible to analyse certain – albeit partial – data relating to the phenomenon. The first key subject here is that of economic magnitude.

During the 2019 European election campaign – looking at only the profiles of the main national parties, their leaders, and their front-running candidates – more than 660,000 euro was spent. Such a massive sum provides further proof that the situation can no longer be ignored by the Parliament.

In April of last year the European Commission made an effort to ensure that they came to the European elections prepared. In its communication to the European Parliament, “Tackling online disinformation: a European Approach ” it attempted to directly confront the topic of online advertising, requiring digital platforms and the advertising industry to follow, among others, the following objectives:

Precisely for this reason, the three main sites concerned (Facebook, Google and Twitter) made their repositories of political ads available online. We recently reviewed these solutions, and while they certainly represent positive steps, they still only offer a partial solution.

Spending for the 2019 European elections

Nevertheless, through analysis of the available data, we can begin to quantify the magnitude of the phenomenon. It has to be stressed that, officially, no Italian party or candidate followed the accreditation process for ads on Twitter. This indicates one of two possibilities: either the platform in question plays an insignificant role in Italian politics, or some politicians managed to advertise without following the established procedure.

Next, we analysed the ads placed on Facebook and Google by the official accounts of the main Italian parties (Lega, Five Star Movement, Partito Democratico, Forza Italia, Fratelli d’Italia and +Europa), their leaders and front-running candidates. From March to the day of the vote, more than 660,000 euro was spent: 568,000 on Facebook, and 92,000 on Google.

Leading the accounts which spent the most are Partito Democratico (164,000 euro), Matteo Salvini (128,000) and Silvio Berlusconi (93,000). Beyond the economic magnitude, this data also tells us something about the varying communication strategies. While the centre-left Partito Democratico stressed the party’s brand, and therefore relied on the party’s official account, centre-right parties, Lega and Forza Italia, instead placed the emphasis on their leaders.

In the graph: Spending on political ads on Facebook and Google

Gathering the data for individual parties, it turns out that Partito Democratico spent the most. Altogether, the party’s official account, the party leader and various front-running candidates spent a total of 197,893 euro. Next is Lega (152,000), followed by Forza Italia (142,000). It should be noted that the Five Star Movement, among the larger parties, spent much less on ads for official accounts on Facebook and Google: just 50,000 euro.

In the graph: Spending on political ads on Google and Facebook

The nature of the problem, and how it’s (not) regulated in Italy

In Italy there’s a sizeable regulatory gap to fill. Whether it’s law 515 from 1993, which regulates how election campaigns can be run, or law 212 from 1956, which establishes concrete laws around electoral advertising, these laws still need to be adapted to the political classes’ widespread use of social media platforms and online communication. There are various problems in this context, but the main ones seem to be:

As a consequence, information available on online electoral advertising, and especially on social networks, is rarely (if ever) structured in such a way that allows for sufficient monitoring of the situation.

This presents a major problem because while we all see the same manifestos (a traditional form of electoral advertising), each individual internet user sees a different range of publicity online. Obviously, this has implications which cannot be ignored.

Why the Parliament must intervene

The data we analysed was made available by the platforms which offer self-directed online advertising services. The solutions put in place, in view of the last May’s elections, are self-regulation tools created at the request of the European Commission. This obviously limits the ability to fully analyse the situation, especially when not every platform releases the same type of information. Moreover, much of the most critical data, such as the user profiles targeted by the advertisers, is not available. To clarify: our behaviour on the internet, such as the pages we follow on Facebook and the posts that we ‘like’, contribute to the creation of a user profile. Information on such profiles, if it is political in nature, becomes a particularly sensitive subject. This form of profiling can be used by the platforms in question, and then by advertisers, to reach a given public.

At present, we know the broad demographic characteristics (age, sex, etc.) of the users who have seen a given content, but not the specific profile information which, as mentioned above, makes this such a sensitive subject. For this reason, among others, the Parliament needs to intervene in order to ensure that it is political bodies who decide on the information made public, rather than private companies.

European Data Journalism Network: data for the rest of Europe

Social media advertising is a crucial issue in every EU country. Other organisations within the European datajournalism network – a platform for data-driven news on European affairs available in twelve languages, of which openpolis is a member – have analysed the data on online political advertising in their respective countries. To those interested, we recommend the contributions from our colleagues in Spiegel (Germany) and Addendum (Austria).

Data source: Data processing based on Google and Facebook data