A dense network of cross-border rail connections cuts through the continent, and it’s set to expand even further in the coming years thanks to new infrastructure and the birth of the European single rail market. However, there are still profound differences between the central and peripheral regions of Europe. 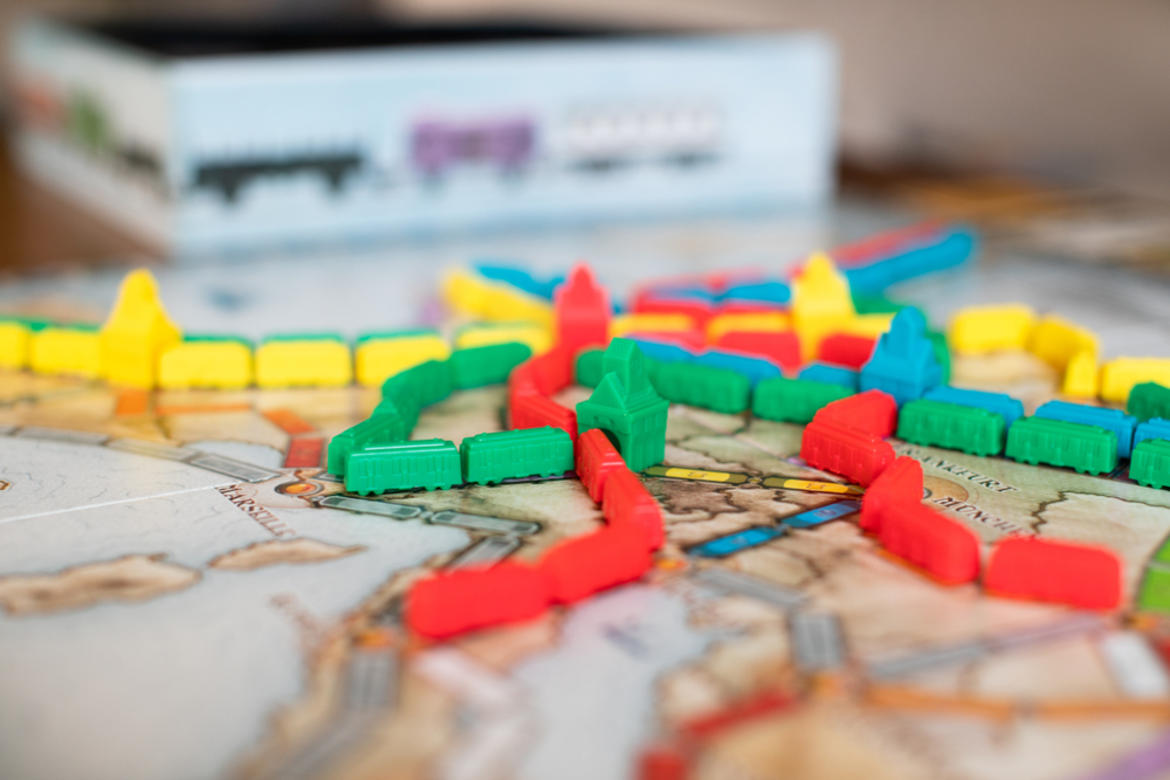 Imagine you’re in Vienna and can go on vacation without having to worry about Covid-19. Boarding a train in the Austrian capital, you can choose from 23 different lines to take you straight to destinations such as Amsterdam, Rome, Split, Bucharest, Gdansk, even Moscow, without a single transfer. 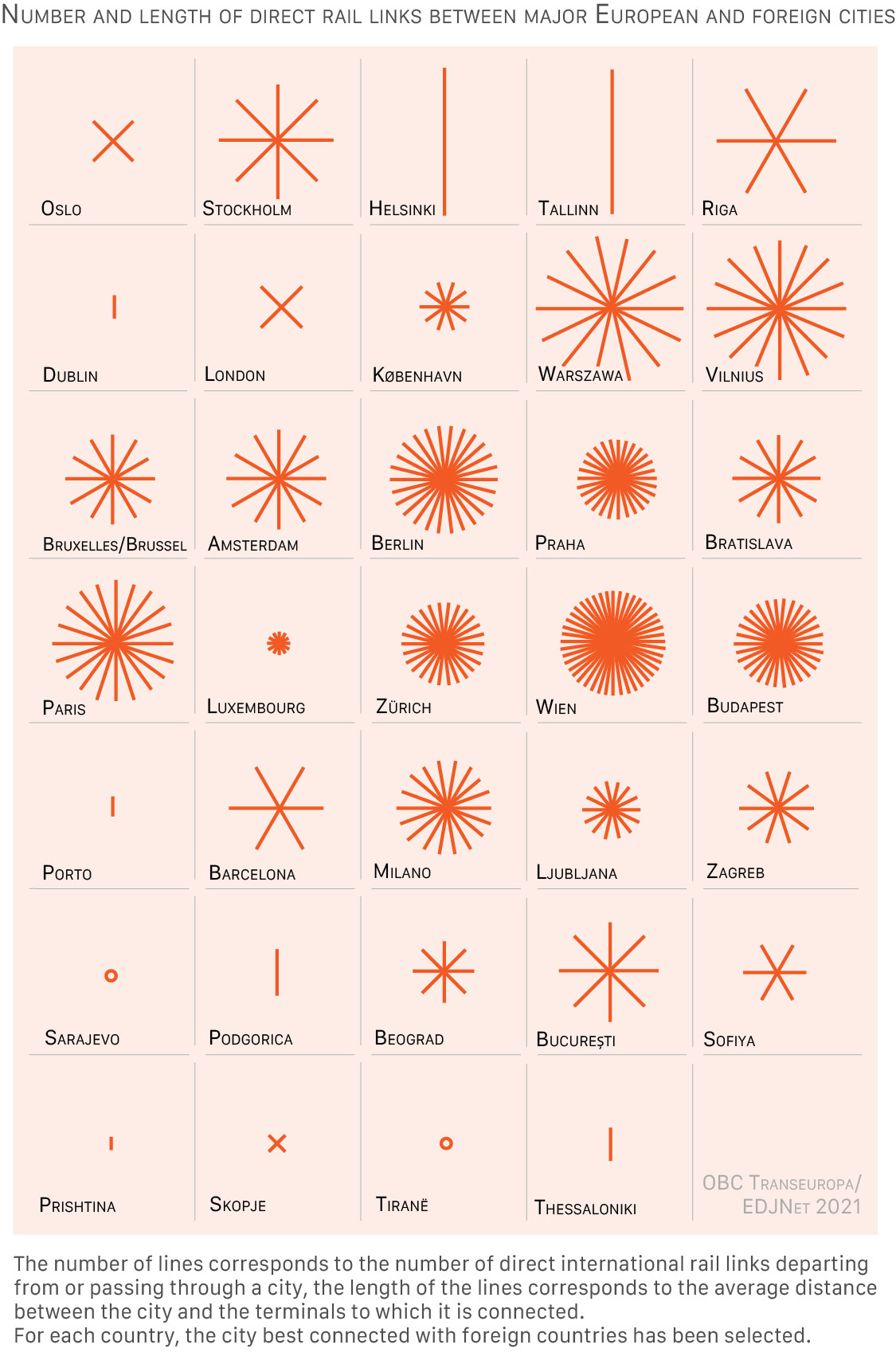 These are far from the only passenger trains crossing borders in Europe: each European country can count on an average of 20 direct train connections with foreign countries, and all of them have at least one, with the sole exception of Albania, while Greece’s foreign connections are only open during the summer period. The European Commission estimates that cross-border transit accounts for as much as seven percent of total passenger train traffic in Europe, and this percentage will rise further in the coming years if planned innovations and investments yield the desired results.

This project featured in one episode in The Europeans podcast: click here to listen to it

As part of efforts to reduce greenhouse gas emissions, the European Union and Member States are aiming to increase the promotion of rail transport for both freight and passengers. Although rail transit has grown in popularity in recent years, people currently use rail for only eight percent of their land travel.

In June 2020, 27 European countries signed a declaration calling for a "European agenda on international rail passenger transport." With this document in mind (among other things), 2021 has been declared the European Year of Railways, which officially launches today . A series of related initiatives by the European Commission are also expected in the coming months.

When we talk about international trains, we generally think of high-speed trains connecting major capitals, like Eurostar or Thalys, or night trains. In reality, cross-border rail connections in Europe mostly consist of daytime trains and ordinary speeds: among the 271 connections we surveyed, high speed and night trains respectively cover just 7 percent and 16 percent of the total, while 40 percent of routes is served by ordinary daytime trains and 37 percent by local cross-border traffic. When it comes to stitching together the territories divided by borders, the role played by local lines is perhaps the one most often ignored.

This is not surprising: after all, these are countries with very long land borders, surrounded by many different states and located at the heart of Europe. Even neighboring countries like Denmark, Slovakia, and Slovenia have a particularly high number of international connections relative to their size.

There is also a historical reason: many railroads in the region were built over a century ago by the German and Austro-Hungarian empires. When the empires fell, the railroads remained while the national borders multiplied and shifted. Even today, the borders between Austria and Slovakia, Czechia and Silesia, Hungary and Transylvania, are among those crossed by the highest number of trains.

On the other hand, the peripheral regions of Europe – such as the Iberian Peninsula, the Balkan Peninsula, or the Baltic area – can generally count on only a few international rail connections, and these are often slow and poorly served. For example, despite sharing more than a thousand kilometers of land border with neighboring countries, Greece and Finland can rely on only a single rail link with foreign countries. Portugal and Bulgaria are also poorly connected with neighboring countries. Lisbon, Madrid, Sarajevo, Tirana and Athens are the only European capitals without a direct rail connection to foreign countries. 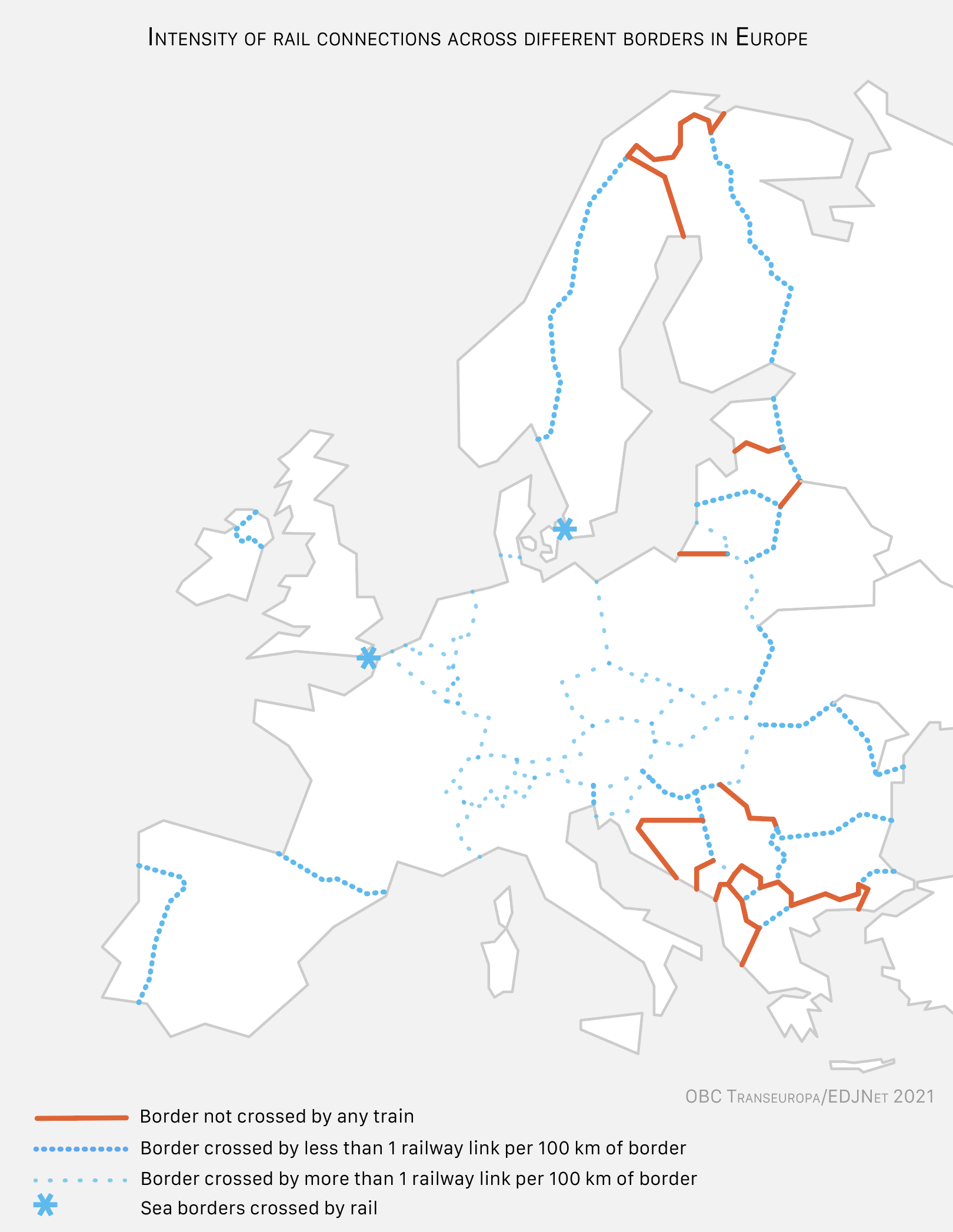 There are countries such as Croatia and Romania where a large proportion of foreign-bound trains point westward, virtually ignoring the other neighboring states. The existence of numerous rail links between a given pair of countries can be taken as an indicator of intense bilateral relations: they imply close historical relationships and significant flows of people.

However, such relationships also work in the opposite direction: strengthening cross-border rail networks helps bind territories and populations more closely together. This is another reason for the European Union’s political (and economic) investment in this area.

In order to improve cross-border rail connections, the European Commission takes aim, first and foremost, at the infrastructure: doubling tracks and electrifying existing lines, constructing new tunnels, investing in high speed trains, harmonizing safety mechanisms, and more. The core network of the Trans-European Transport Network (TEN-T) should be completed by 2030: Europe will have faster Alpine crossings, more high-speed cross-border lines, and modernised tracks in Central and South-Eastern Europe. However, improvements on cross-border sections are among the most delicate aspects of the roadmap, and progress is so slow that the European Commission is expected to support them with targeted interventions in the coming months.

Ultimately, good tracks are not enough: in order to really strengthen the popularity of cross-border rail connections, it is also necessary to simplify the rules and procedures governing rail traffic, which until recently have been highly fragmented and burdensome for operators. As of 31 October 2020, the EU Railway Agency (ERA) is the single certification body for vehicles and rail traffic operators within the EU.

The EU's Fourth Railway Package, a set of measures approved in 2016 and currently being implemented, establishes a single market for rail services in Europe and makes it much easier for operators to serve routes in countries other than their own. It should also soon become much easier for citizens to research and book tickets involving multiple operators . According to the European Commission's calculations, increased competition will increase supply and lower prices.

Finally, the European Union could intervene to subsidize connections that are important, but for which there is insufficient market demand, such as the Lisbon-Madrid route.

With the birth of the single rail market, several countries and operators have already announced the expansion of their cross-border connections. Germany, for example, has recently presented Trans Europe Express 2.0 , which should improve connections such as those between Amsterdam and Rome, or Berlin and Barcelona. Other projects focus on night trains, with Austria, Switzerland, Germany and France jointly announcing an expansion of their timetables in the coming years.

The dataset was manually assembled by browsing and gathering national sources, coming to a large extent from the websites of the main operators of each country as well as from the websites of minor companies operating local crossborder services. Operators and managers of national railway networks were contacted by email as well; information provided by operators and managers in Austria, Belgium, Bulgaria, Croatia, Czechia, Hungary, Italy, Lithuania, the Netherlands, Norway, Poland, Romania, Spain, Sweden and Switzerland was included.

While some international rail links are currently suspended because of Covid-19-related travel restrictions, we included them as they are part of railway timetables for 2021 and they are expected to be resumed as soon as it is possible. Links that are currently suspended for ongoing major upgrade works are not included: for instance, because of works the Budapest-Belgrade route is currently operated only on the Budapest-Subotica stretch.

We identified 271 distinct rail links for passenger trains crossing borders in Europe. Whenever different trains or different companies cover the same route, we merged them with the other trains covering it (except for the cases where the same route is covered by both daytime and night trains): our interest was not in listing all individual train services crossing European borders, but in identifying all distinct direct rail links crossing them.

Some rail links may be served in their entirety only by some trains or in the summer. In this case, we indicated alternative terminals in the dataset. For instance, the Eurocity connecting Munich to Bologna extends to Rimini during the summer: we indicated such a route with Munich as a terminal and Bologna-Rimini as the other terminal.

Some routes include two different destinations at one of their ends, as trains operating them get split at some point of their journey. In this case, we indicated for instance Hamburg as a terminal of the rail link and Zurich/Chur as the other terminal.

The dataset covers rail links departing from/arriving to all EU member states (except for Malta and Cyprus), plus the United Kingdom, Norway, Switzerland, and the Western Balkan countries. Direct links connecting one or more of these countries to Turkey, Moldova, Ukraine, Belarus or Russia are included, while other international routes departing from this latter group of countries are not included.

Calculations on the connectivity of the different cities were made in this way: for a given city, we looked at all the different routes departing from or passing through them. We listed the outermost terminals of each of those routes abroad, and we calculated the flying distance between the city and each of those terminals using the European Commission’s distance calculator . In this way, we obtained the number of different routes that can be boarded on from a given city and the average distance from their terminals.

The article was updated on 30 March.

Datasets and sources can be browsed here