Greece has a new center-right government since summer 2019. Its approach to migration differs sharply from its predecessor’s, as more controls and constraints are imposed on asylum seekers. The government claims that the system will become more efficient, but some organisations are unconvinced. 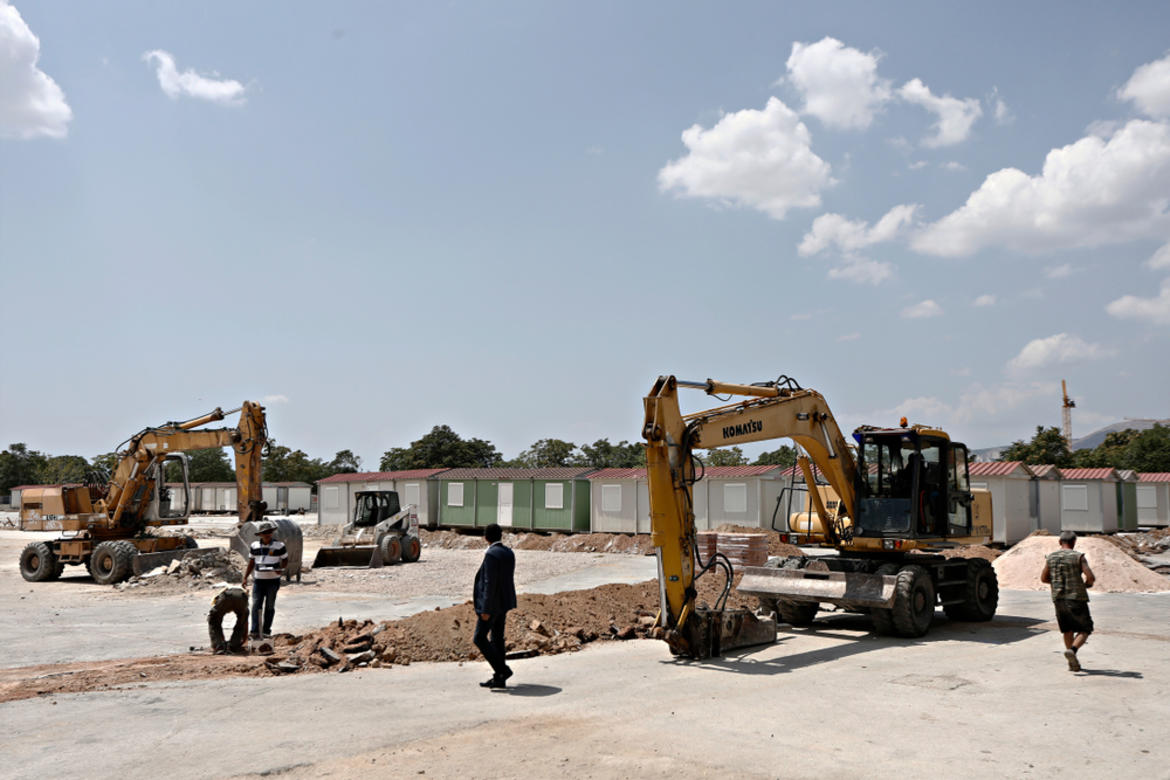 Up until summer 2019, the Greek refugee camps were under the responsibility of the Ministry of Migration Policy. On July 8, 2019 the newly elected center-right government decided to transfer the control of the camps to the Ministry of Citizen Protection – responsible for Greece's public security services.

Compared to Alexis Tsipras’s government, the new one has taken a tougher line on migration, accusing its predecessors of mishandling the refugee crisis and of leaving people stranded, under inhuman conditions, in overcrowded refugee camps and reception centers. Besides that, OLAF, the European Anti-Fraud Office, has opened an investigation into alleged irregularities involving EU funds provided to Greece under Tsipras’s government to improve living conditions for migrants and refugees.

During the summer of 2019, the government of New Democracy announced that it would not grant health insurance cards to non-EU-nationals anymore, preventing them this way to have access to the Greek healthcare system. The Parliament passed a new controversial asylum law, that will speed up the procedure. Furthermore, the government announced the shutdown of the notorious reception and identification centers in the eastern Aegean, the creation of new closed detention centers, and the transformation of the open refugee camps in the mainland into controlled ones.

The word “controlled” has raised many questions about the functioning of the open accommodation schemes. OBC Transeuropa looked at the new law (L. 4636/2019) voted on November 1, 2019. The way it is written leaves room for many ambiguities, but the law never mentions the term “controlled”. We asked Special Secretary Logothetis to explain us what exactly controlled refugee camps mean. “It means centers with security. The state will know who is staying and with whom, for how long, when he/she is leaving and entering the camp and what kind of benefits is receiving, as well as who is working there. Today the refugee camps are wide open for everyone, without ensuring security for the residents”, he told us. More specifically, the residents will have a plastic card marked by some personal data like a photograph, possibly fingerprints and a barcode for identification.

The announced construction of closed centers has been criticized, as it might trigger unexpected effects and increase xenophobia. In September 2019, about 150 camp residents blocked the runway of the Athens-Lamia national road, complaining about their long stay at Malakasa camp and about their living conditions. In November 2019 a nationalist group protested against the presence of Muslim refugees by drinking alcohol and eating pork outside the Diavata camp. At Vrasna, a village in northern Greece, locals blocked buses carrying refugees and migrants from the islands, who were meant to be transferred to the area.

“Incidents of violence and protests are already taking place at refugee camps. My priority is not to let these incidents occur, fueled by a sense of insecurity created for both the residents and the local population. A democratic society gives you the right to do whatever you want, but at the same time there are measures and sanctions. We are not going to do anything else than to ensure some control. A well-organised society has to protect the rights of the people who are seeking protection”, stressed Logothetis. “We want to create a framework that is clean, fair, fast and honors the country”.

How Reception and Identification Centers worked

Alexis Tsipras’s government had established six Reception and Identification Centers (RICs) at border locations on the islands of Eastern Aegean and in the Evros region, meant for the initial administrative treatment of new arrivals to Greece. What takes place at RICs are registration and identification, medical and psychosocial screening, provision of information, referrals of persons with specific issues, final referral to further administrative treatment of new arrivals, etc.

In accordance with the law 4375/2016, the new arrivals were meant to stay in the RICs for a maximum of 25 days. Until recently, the 5 RICs located on the islands were operating as registration centers as well as de facto open accommodation sites for asylum seekers and persons under the return/readmission procedure. In fact, those centers hosted refugees and migrants for more than 25 days, until the finalization of the asylum and readmission procedures. Only the mainland RIC in Fylakio was operating for the purpose of registration for up to 25 days.

From the beginning of the refugee crisis until now, thousands of people were stranded for more than one year on the Greek islands living under inhuman conditions, suffering from the lack of safe access to food, water, health care and accommodation. Human Rights Watch issued a press release on December 4, 2019, urging the Greek government to adopt measures to secure basic rights, services, and safety for women and girls in Moria and other island hotspots.

The law introduced by New Democracy sets out the shutdown of the RICs and the creation of new closed detention centers, not only on the islands but also in the mainland. Four closed pre-removal detentions centers have already been operating in Greece for many years (Petrou Ralli, Amygdaleza, Xanthi and Drama Paranesti). According to the Greek Council of Refugees , detention conditions for third-country nationals in Greece, including asylum seekers, do not meet the basic standards (prolonged detention, poor hygiene conditions, overcapacity, etc.).

The Ministry of Citizen Protection informed OBC Transeuropa that the new detention centers will be built and supported by EU funds. “The centers are set up to meet needs. You can create detention centers and use them as open sites. But there are people that need to be detained by law, so you need closed detention centers. The design of a comprehensive strategy is based on projections. The government expects that there will be multiple people who should be returned back to Turkey or their countries of origin”, noted Manos Logothetis, Special Secretary for First Reception at the Ministry.

We asked the European Commission to comment the Greek government’s approach to the closed reception centers, and whether it will contribute to fund them. “Urgent action is needed to improve the conditions for all migrants and asylum seekers on the islands”, a spokesperson replied back. As we understand, the EU backs – not only financially – the Greek government’s plan for the new detention camps.

According to UNHCR, the majority of arrivals to Greece have refugee profiles and are likely to be entitled to international protection. More than 85 per cent of sea arrivals in 2019 were Afghan and Syrian families as well as people from Iraq, Somalia, Palestine, and DRC. “They need access to fair and efficient asylum procedures and adequate conditions while they wait for their cases to be heard”, UNHCR stated to OBC Transeuropa.

Alongside with the new measures on camps is the new asylum law, which takes effect at the start of 2020. The law introduces extensive provisions for the detention of asylum applicants. “Detention should be a measure of last resort, applied only for as short a period as possible, be justified on a limited number of grounds, and only when necessary, reasonable and proportionate. Alternatives to detention should always be considered first, based on an assessment of the individual’s particular circumstances. Failure to do so could render detention arbitrary”, UNHCR noted.

“The government's decisions and the new asylum law are part of a wider deterrence policy that Greece does not apply alone but is a more general EU choice. It started with the EU-Turkey deal, but also in the same vein with the agreements with Libya”, said Lefteris Papagiannakis, Head of Advocacy, Policy and Research at the Greek NGO SolidarityNow. Many international organizations and NGOs raised their concerns over the new asylum law, which resembles more like a defensive and punitive strategy, than a long-term plan. It is said that it will enhance the returns and deter new arrivals. On the contrary, the government presented the new law as an alternative human plan to the current situation.

“Asylum process will not be obstructed, what is changing is the suspensive effect of the complaints and appeals. Our responsibility is to change and make asylum procedure faster, in order not to let people living under miserable conditions for 2 or 3 years. That means respect of human rights: you ask me something and I answer you in time, without “destroying” you or letting you live under unacceptable conditions”, stressed Special Secretary Logothetis. Commenting on the new asylum law, a spokesperson for the European Commission said that “we will follow closely its implementation, also to ensure that fundamental rights are fully protected”.

What is still missing

According to UNHCR, almost 49,000 people have been recognized as refugees in Greece since 2013 and the number is increasing. Moreover, there are about 5,200 unaccompanied minors living in the country, as well as people who are waiting for family reunification. By December 2018, 11,500 refugee and migrant children were enrolled in Greek schools.

The previous government launched an integration program for people residing in temporary accommodation schemes, in collaboration with IOM (duration June 2019-November 2020). The Hellenic Integration Support for Beneficiaries of International Protection (HELIOS) includes integration courses, accommodation and employability support, integration monitoring, as well as sensitization of the host community. However, the national plan for integration was delayed and it was not sufficient to compensate decades of absence of policy. “Unfortunately, as a country we have never dealt with social inclusion and we are called to fill this gap in a very short time. If we take into account some other decisions, a hostile environment for migrants and refugees is being formed which will affect the integration process and the promotion of social cohesion”, stressed Papagiannakis.

OBC Transeuropa asked the European Commission if there is an European plan for financial assistance to Greece and to share responsibilities among member states on asylum seekers arrived to the country. A spokesperson told us that “the EU will support any measures, that will improve the conditions in the islands and make procedures more efficient”.