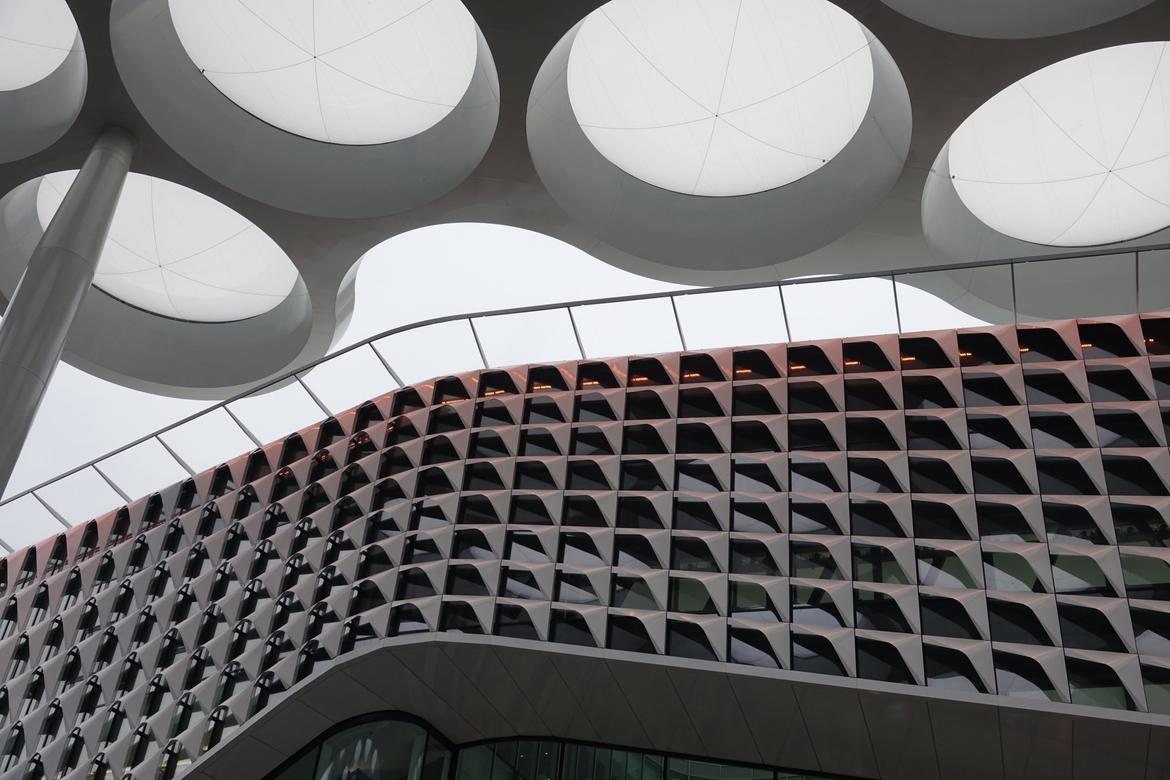 In Utrecht and Santander open data platforms enable citizens to help municipalities locate and fix life issues that affect public wellbeing, such as full garbage bins, public lightening failures, road safety, dead animals, abandoned cars and many others. Both cities are part of a group of data-savvy municipalities committed to improve everyday life using technology. A commitment confirmed by their pioneering status in a new global marketplace of innovative and cost-effective local governance solutions and services for citizens.

The goal of this new “Front-Runner Smart City” program is forging a common data management mechanism to unlock the benefits of re-using increasingly available data to meet today urban needs, while preparing for tomorrow’s requirements thanks to the flexibility of open-source technology. This initiative, announced in November 2018, will have its first public venue of the new year at the annual Open & Agile Smart Cities (OASC) conference on January 17.

The Front-Runner program, heralded as “Open APIs for Open Minds”, is co-managed by the FIWARE Foundation, an EU-backed independent body developing multi-sector smart technological solutions, and the TM Forum, the world's largest international association of digital service providers. FIWARE and TM Forum intend to collaborate on a set of standards that are interoperable, scalable and replicable across local administration departments as well as national borders. Both organizations will take the floor at the upcoming OASC conference to present their joint-venture.

The initiative is implemented in partnership with the OASC itself and involves, among others, also Metropole Nice Cote d’Azur and Gothenburg. These two cities, together with Utrecht, are partners of the IRIS project, funded through the European Innovation Partnership on Smart Cities and Communities (EIP-SCC). IRIS, started in 2017, is one of the leading EU-funded smart cities initiatives and brings together administrations, industry and citizens to improve urban energy, mobility and ICT through more sustainable integrated solutions and participative co-creation.

The FIWARE-TM Forum Front-Runner technology builds on the FIWARE Context Broker incorporating the API Next Generation Service Interface (NGSI). The Context Broker was released in August 2018 and funded by the EU through its Connecting Europe Facility Programme (CEF) that aims to create the Digital Single Market in Europe and feed the European Data Portal and the EU Open Data Portal. FIWARE is now receiving additional CEF funding for further development and also participates in other EU-funded initiatives that can help the technology evolve.

The functioning and benefits of the joint initiative by FIWARE and TM Forum is threefold. First of all: overall city-level governance. FIWARE reference architecture, based on the NGSI API, breaks vertical silos of information, pooling all data into a Context Info Management layer. This virtual space provides a holistic picture of what is going on in the city in real-time, enabling to connect and process data from different departments at a large scale and at the right time.

Smart city common data models are public and royalty-free, with no costs of adaptation to achieve full interoperability among systems within the city. They are validated through projects implemented in cities where a platform aligned with the defined architecture is previously deployed. Models are considered stable as soon as enough cities have validated them in practice. TM Forum turns stable models into formal specifications, demonstrating support of both the wider industry and city communities in the framework of its Smart City Project.

“Our data models are deployed in over 70 countries and are a reference implementation for our information model, SID, which is used by over 90% of operators around the world”, Joann O’Brien, Vice-President, responsible for APIs & Ecosystems at TM FORUM.

“We are proposing cities to change the way in which they understand their management”, Angeles Tejado, senior marketing manager at Fiware Foundation, said. “Open platform technologies that are developed once and can be transferred to any city with minimum effort will build confidence among companies, scientists and the general public, also protecting cities against vendor lock-in.”

Indeed, open APIs prevent service provides from hooking cities to their own systems. Free competition allows talented technical and social innovators to jump in and the winners will be those that can design the best interchangeable data products that municipalities cannot create by themselves due to lack of internal skills and resources.

Martin Brynskov, chairman of the board of Open and Agile Smart Cities (OASC), explains how data management fuels local governance solutions and citizen-centric services in this exclusive interview.

Together with the three IRIS front-runners, other cities have already joined the FIWARE-TM program. They are both non-European, such as La Plata (Argentina), Montevideo (Uruguay), and mostly European, such as Vienna (Austria), Saint Quentin (France), Genoa (Italy), Valencia and Santander (Spain) and Porto (Portugal).

These last two cities are also part of the eight Core Pilot Cities involved in OASC’s own program called SynchroniCity. This is another EU-funded multi-partner flagship initiative aiming to deliver a digital single market for IoT-enabled urban services. OASC is focused on Minimal Interoperability Mechanisms (MIMs) and back in 2017 endorsed the TM Forum’s Open APIs as one of the key components of its shared city marketplace.

Acting as an umbrella of national networks affiliating about 120 cities from 24 countries, OASC will help the Fiware Foundation and TM Forum to boost geographical reach based on the actual needs of local communities. Indeed, the Front-Runner program is open to all local governments willing to collaborate to define data models and to develop compatible open data publication platforms through adopting the FIWARE reference API and the TM Forum Open APIs, in cooperation with partners that are also members of either FIWARE or TM Forum.

Kick-off meeting with the front-runner cities were organized at the end of November during the 5th FIWARE Summit in Málaga. Regular virtual and face-to-face meetings, extended to prospective newcomers, will programmed during TM Forum and FIWARE events throughout 2019.

All cities within the EU are recommended to adopt CEF building blocks, like the FIWARE Context Broker, so that their digital infrastructures can seamlessly support cross-border services.

In the future, the CEF programme will launch open calls for public administrations to adopt any of its building blocks. The EU has already set up a number of funding instruments to support municipalities transition to a smart governance.

Alongside the EIP SCC, public funding is on offer for smart cities. Via the European Commission’s Horizon 2020 research and innovation programme, a total of 12 Smart Cities and Communities “Lighthouse” projects have been funded, to the tune of €270 million, since 2014. The winning projects include precisely IRIS and SynchroniCity. The projects involve Lighthouse and Follower cities, working together to demonstrate processes, technologies and business models to transform urban environments into smarter and more sustainable places. The Lighthouse cities have to come with a plan already developed. The follower cities can then adapt the plan and use a model that then could be further replicated.

The Dutch city of Utrecht offers virtuous examples of digital citizen-centred services. They all run on the open City Innovation Platform developed in the framework of IRIS project by Civity (Future City Foundation), a non-profit organization that works in close contact with the FIWARE Lab Node in the Netherlands.

“Our data platform uses the FIWARE API and we will develop it further within the IRIS project through looking into the TM Forum APIs within the Front-Runner program”, Thomas Kruse, Head of Strategic Innovation at Utrecht Municipality, said. “We have several actions, including a project helping disabled people to find parking slots”. Enriching urban mobility and car navigation in smart cities is one of the key goals of the FIWARE-TM Forum Front-Runner program.

“We have also launched the Smart Reporting project”, Kruse said. This is a participative project for civic issue tracking that is implemented in Utrecht and in many more cities in The Netherlands. The online dashboard gelocates in an interactive map all issues reported by citizens during the last two years, with many options to zoom in and see the details of each report. All content displayed in the dashboard is also available as open data that include also information about the feedback and fixes by the municipality.

A similar project is in place in Santander with the name of Pace of the City. “Our sensor infrastructure is based on FIWARE architecture, initially deployed under the SmartSantander EU financed Project, and we’re engaged to use open standards for further developments”, Juan Echevarria Cuenca, Innovation Technical Manager at Santander City Council, said. 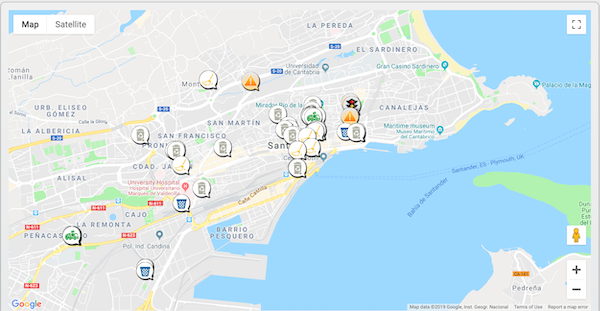 Another interesting application in Utrecht is called Bike Sniffer, an air quality surveillance project allowing cyclists to measure pollution levels across their city and geolocating their measurements in an interactive map.

This project is managed by the province of Utrecht (of which the city of Utrecht is the capital). The province has two action plans: green bicycle routes and air quality. These plans apply to the whole province and, as a result, the city is involved as well.

The pollution sensors were built by the company Sodaq. Civity collects and stores the data in its platform and makes it available in the form of both a dashboard and open data. The map shows measurements performed with a specific sensor, the different routes that each cyclist has travelled and the average pollution level measured by all sensors in a chosen day.

About 30 people participated in the pilot phase. Participants used a total 10 sensors and biked approximately 8000 km, measuring for 6-7 weeks.

“The project was done in a short period of time: we started beginning September, the sensors were ready a month later and people started cycling on 6 October”, Arjen Hof, Founder of Civity, said. “The aim of the province of Utrecht was to see if the idea would work out. They are now very enthusiastic of the outcome and they want to scale up the project, with more sensors in a broader region. The city of Utrecht itself will be probably more actively involved in the next phase.”