Leftwing coalition Syriza’s rise to power in 2015 seemed to swept away the old greek political order. But a journey through the strongholds of these dynasties shows they never went away. Their power lies deeper in history. 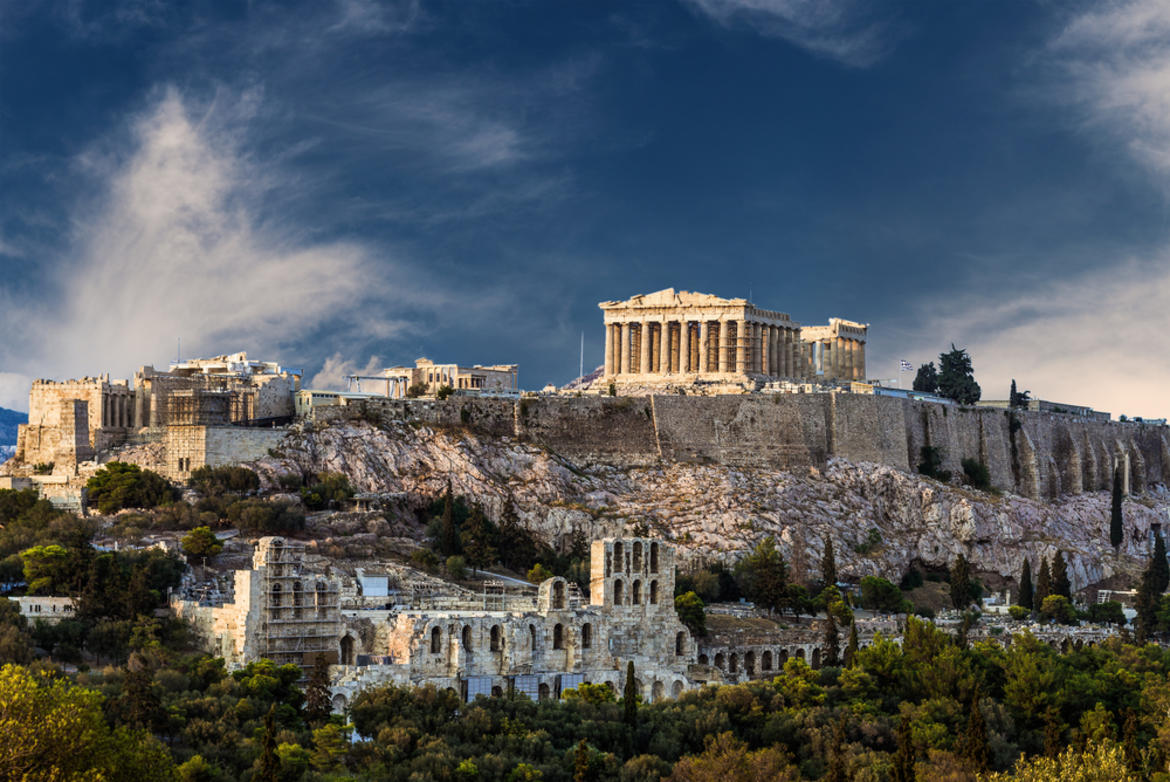 ATHENS — Until the economic crisis that gripped the country in 2009, Greece was rarely a breaking news story. International reporters used to focus mainly on the tourist attractions of the country or, more occasionally, on the unfortunate fires that ravaged its landscape. Then a political storm erupted. In 2015, Syriza, a previously marginal, left-wing coalition party, came into power and smashed the old Greek political order. At the same time, Golden Dawn, a neo-fascist party founded in the 90s but hitherto irrelevant, had entered the Parliament and caused international alarm.

It was, or it seemed to be, the start of a new era.

But Syriza never succeeded in conquering two regional units of Greece, Kastoria, and Laconia, strongholds of the Greek conservative parties. Neither of the rightwing parties could catch the vote of predominantly leftist Achaea, in the Peloponnese, and Chania and Heraklion, in the island of Crete, according to data collected by EDJN.

Political history and traditions weren’t swept away entirely and now, as the early general election of 7 July approaches, old rivalries festered in the bastions of Greek power begin to soften back into light.

An intriguing history of ruling dynasties links the island of Crete to the coming electoral fight and promises to make the touristy and rich Greek island into one of the most observed places during the political race.

In fact, Crete’s regional units of Chania and Heraklion have voted overwhelmingly and uninterruptedly for the left and center-left political parties in legislative elections in Greece since 1996, according to official data of the Greek Minister of Interior.

The only reversal in the trend has been between the Panhellenic Socialist Movement (PASOK) and the leftist Syriza. In fact, PASOK governed Chania and Heraklion from 1996 to 2012, when Syriza took over.

The reason, says Angelos Kovaios, an Athens-based journalist who works for the Greek daily To Vima, is that the political positioning of the two areas is linked to the anti-nazi sentiment that grew up here during the World War II and is still alive.

“The tourist island was a battleground of the resistance against the Nazis, and it has been for decades connected to progressivism,” says Kovaios.

“Since the beginning of the 20th century, Crete has been the center of the liberal anti-monarchy vote, being the homeland of Eleftherios Venizelos, the founder of Liberal Party in Greece. Similarly, Achaea, the homeland of Papandreou family, evolved into a bastion of the centrist vote, as shown by the high vote tallies of the Center Union in 1961-1964. Both these local traditions were inherited after 1974 by center-left PASOK, giving almost constantly two of its highest vote scores in the country until 2009,” adds Panagiotis Custenis, a Political Science expert and Researcher of Electoral Sociology of the University of Athens.

“To a large extent, after 2012, these regions switched their loyalties to SYRIZA, since old PASOK voters constituted the main electoral basis for Alexis Tsipras’s rise to power”, he says.

Even in the last European Parliament election in Greece, which resulted in a major victory (of more than nine points of advantage) for the center-right New Democracy (ND) party, voters of Chania and Heraklion did not punish Syriza, consistent with the previous national elections.

Even so, nowadays, a significant element of the island’s politics cannot be ignored.

The family of Kyriakos Mitsotakis, the center-right favorite to become Greece’s next prime minister, comes from a Crete-based clan that was linked for decades to the anti-monarchist Liberal Party founded by Eleftherios Venizelos (1864-1936), the prominent Cretan statesman who backed the Allies in the First World War.

However, Konstantinos Mitsotakis has had a complicated relationship with Greek politics. He first entered mainstream politics as a liberal parliamentarian in 1946, but then made a U-turn when he masterminded in 1965 a split in the governing Centre Union Party (led by Georgios Papandreou, grandfather of the socialist prime minister) that opened a political crisis and precipitated a military coup (1967-1974).

“The case was called ‘the defection,’ and it is related to the fall of the Papandreou’s government by some MPs that had as a leader Mitsotakis. This group of MPs formed a new government with the support of the right front and the monarchy. At that time, it was a shock for the center-left family,” recalls Nikos Marantzidis, a pollster and professor of political science at the University of Macedonia in Thessaloníki.

Later on, Konstantinos Mitsotakis merged in 1978 into the center-right ND, a party that since 2016 has been led by his son, Kyriakos.

“I would keep an eye on what happens in the upcoming election in Crete. There is today in the whole country an anti-Syriza sentiment, motivated by the continuing austerity measures that the leftish government was finally forced to accept. Moreover, Crete is an important region because it is a rich and highly populated area. It would be a major loss for the left to lose Chania and Heraklion,” comments Marantzidis.

In fact, in the last two decades, ND has already succeeded in gaining the vote of the other two regional units of Crete, Rethymno, and Lasithi, whose voters occasionally moved to the center-right. The latest example was the European elections.

Moreover, Chania and Heraklion are not the only strongholds of the left and center-left in Greece.

There is also Achaea, a regional unit that is part of West Greece and home of another political dynasty of long standing: the Papandreou, a family that produced three Prime Ministers between 1944 and 2011, Georgios Papandreou senior, Andreas and Georgios junior.

One key to understanding the brand-new popularity of ND is to be found in Kyriakos Mitsotakis’s personality, analysts say.

“Mitsotakis is a centrist coming from a liberal family. We could say he is in the far left of his party,” says Marantzidis.

“Actually, the core voters of ND have never seen the Mitsotakis clan as really belonging to the center-right political spectrum. They perceive them as intruders. Why then are they going to vote for Kyriakos Mitsotakis? Because they have understood that he could win the election,” he adds.

The current political campaign has produced evidence of this.

Ahead of the vote on the 7 of July, Kyriakos Mitsotakis has presented himself as a moderate, conscientious politician, unwilling to increase the political polarisation in the country or send distressing messages to the European authorities.

Recent Eurobarometer polls also highlight these attitudes. Asked in March about what they would vote in a hypothetical referendum regarding the membership of Greece in the EU, only 14% of the interviewed said that they would vote to leave.

In particular, the inhabitants of Crete had the most positive image of the EU, according to the same survey.

In fact, Kyriakos Mitsotakis is no amateur of Greek politics. He was first to the Hellenic Parliament in 2004 and he served as the Minister of Administrative Reform between 2013 and 2015. After that, he converted in one of Tsipras’s main political opposition in the Parliament.

This pattern has played out even in Kastoria and Laconia, two significant strongholds of ND whose voters have always voted conservative since the 90s, according to the data of the Greek ministry of interior.

Laconia and kastoria, the right

Data examined by EDJN also reveals that, in both regional units, ND won 10+ points more in each of the nine elections held since 1996, compared with the national results of the Greek conservative party.

Another similarity between the two rightwing regions is that they also have a GDP per person that is lower than Chania, Heraklion, and Achaea. However, this gap has been closing in recent years. Concretely, the inhabitants of Kastoria were 6 300 euros poorer than the ones in Heraklion in 2008, while in 2016 the gap between the two was of 2 700 euros.

However, Laconia and Kastoria are different cases.

In the case of the Peloponnesian Laconia, whose administrative capital is Sparta, the prominent city-state of ancient Greece, its political culture evokes the political division that originated in the 1920s, experts say.

“Laconia has traditionally been the center of conservative and pro-monarchy vote for more than a century. This local electoral positioning has remained constant over the years and has made Laconia one of the strongest rightist and far-right bastions,” says Custenis, the researcher of the University of Athens.

“At that time, Venizelos wanted to participate to the conflict on the side of the British and the Americans, but King Constantine, a pro-German because of family ties, wanted to stay neutral to favor the plans of the Central Powers,” concludes Marantzidis.

In 1974, Prime Minister Constantine Karamanlis decided to hold a referendum to ask citizens to choose between monarchy and republic. This second option won with the support of 69.2% of voters. However, the highest vote for the monarchy was precisely in Laconia, where almost 60% voted in favor of this system.

“Not only monarchy has been popular in Laconia. Also, ND and far-right extremists as Golden Dawn have been very popular there,” says Kovaios.

In the European election of May 2014, Golden Dawn even took the third position in Laconia, obtaining 15.45 percent of the vote, twice the national score of the extremist party.

The Greek press then started calling Laconia a stronghold of the far-right party. However, at the latest European election Golden Dawn suffered a heavy defeat in the area, losing more than 50 percent of their previous support.

Lastly there is the case of Kastoria, on the northern border with Albania, where during the Greek civil war (1946-49) the battles between communists and anti-communists were particularly intense.

“The identification of Kastoria with the right-wing vote is a legacy of civil war and anti-communist reaction. In particular, Kastoria developed a right-wing electoral behavior, mainly after the World War II, due to EAM’s (the main left-wing resistance movement) collaboration with a part of the Slavophone minority in Macedonia as well as its conflicts with other local anti-communist resistance (or collaborationist) groups,” explains Panagiotis.

“The final defeat of EAM and the exit of most Slavophones from the Greek territory after the end of Civil War in 1949 contributed decisively to the conversion of Kastoria to an electoral equivalent of Laconia in Northern Greece,” he adds.

However, the recent deal between Greek Prime Minister Alexis Tsipras and his North Macedonian counterpart Zoran Zaev on the name of the neighbouring state did not seem to boost significantly the right-wing vote, experts say.

“SYRIZA losses in Kastoria and Florina were not as major as in other regions of the country and its score was indeed higher than at the 2014 European elections,” argues Panagiotis.

Opinion polls suggest that the party that finished first in European election in May, New Democracy, will win also the legislative election. The political fight will also occur, of course, in the region of Attica, where the high-populated capital of Athens is located, and in the region of Central Macedonia, where is placed Greece's second city of Thessaloniki. But any shock coming from the strongholds could be a real heartquake.