Which parties and countries chair the EP committees?

The MEPs in the European Parliament's committees are divided up among 20 standing committees and two sub-committees (Human Rights (DROI) and Security and Defence (SEDE)), specialising in concrete areas of EU's policymaking. 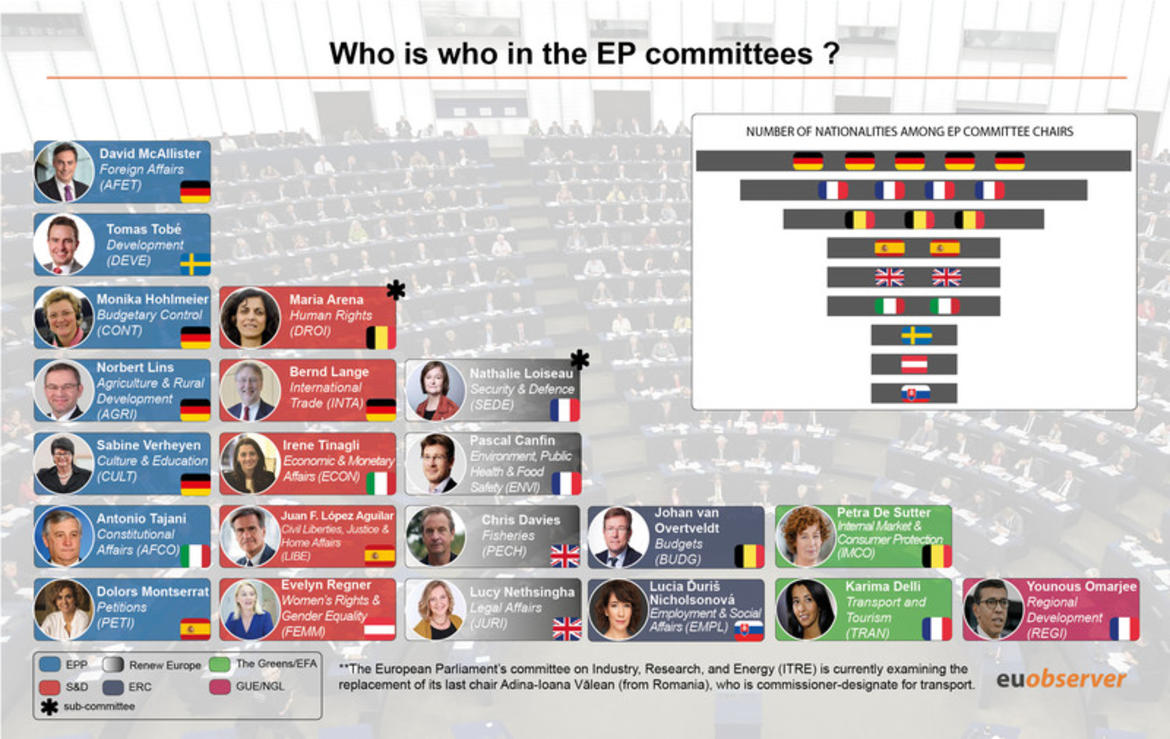 The size of committees varies hugely - from 21 (fisheries, the smallest) to 71 (foreign affairs, the largest) members

At the beginning of a new legislature, the parliament decides which MEPs will sit in which committees - based on the preferences expressed by them.

However, the size of committees can vary significantly - from 21 (fisheries, the smallest) to 71 (foreign affairs, the largest) members.

Belonging to a political group has a direct impact on the representation of MEPs in the different committees.

The biggest group of the EU parliament, the European People's Party (EPP) has the largest representation (33.3 percent) of chair committees, followed by the socialists (S&D) with 23.8 percent and the liberals Renew Europe with 19 percent.

This is the case for the Greens/EFA and the conservatives (ECR), which have only two committee chairs (9.5 percent) and the leftist group NGU/GUE, which only leads the committee on regional development, with French MEP Younous Omarjee (4.8 percent).

According to the parliament, "non-attached members can nominate individuals to committees and delegations, but they are unlikely to be elected to positions as committee chairs or to be appointed rapporteurs on significant dossiers".

The breakdown of the parliament's chair committees by nationality is also uneven.

Three Belgian MEPs lead the committees of the internal market and consumer protection, budget and the sub-committee of human rights.

The UK, Spain, and Italy have each two committee chairs, while Sweden and Slovakia have only one.

Since the withdrawal of the chair of the committee on industry, research, and energy (ITRE) Romanian MEP Adina-Ioana Vălean, who is currently commissioner-designate for transport, central and eastern European countries are largely under-represented at committee chair level.

In replacing Vălean, the members of ITRE must try to keep gender and geographical balance.

Additionally, it can be expected that the chair committee will be from the EPP (the same political party of the commissioner) -designate, according to a spokesperson of the parliament.

However, other parties can also present their candidates, who are considered first by the committee coordinators before all members of ITRE have a final vote.

Likewise, ITRE will have a new chair committee only once the new commission is approved, since Vălean is still officially an MEP.