What will the Euro effect be in Croatia?

Within the next two or three years, Croatia will enter the Eurozone, with the euro becoming the country’s official currency. Entry is expected to have an impact on both foreign trade and society at large, coming with increasing constraints and opportunities. 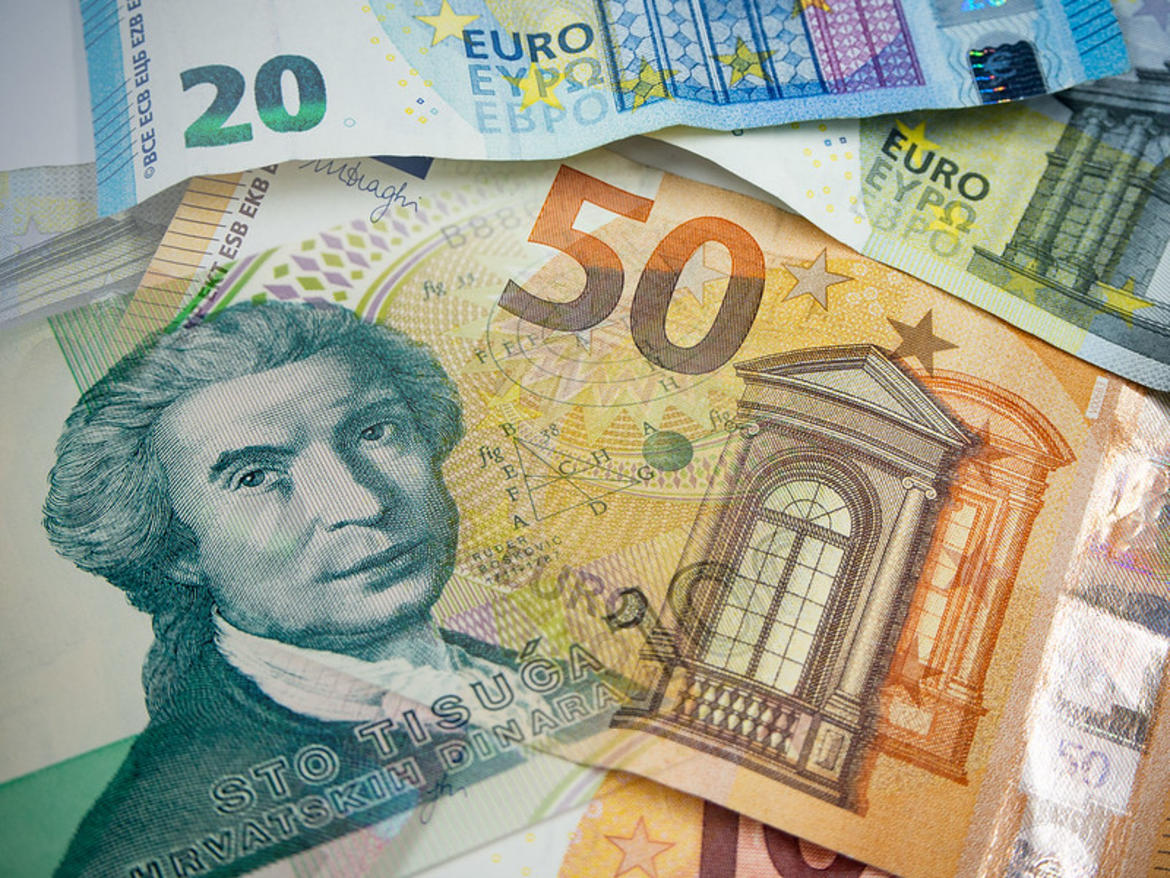 Right after the latest parliamentary elections in July 2020, Croatia, along with Bulgaria, entered the EU exchange rate mechanism (ERM-II), generally considered a waiting room for the Eurozone. The news was illustrated by the blossoming expression on the face of Prime Minister Andrej Plenković, and the promise  from Valdis Dombrovskis, Vice President of the European Commission, that this would mean lower interest rates, better integration into the single market, higher investor confidence, and lower conversion costs.

The most realistic date for the introduction of the euro is January 1, 2024. Until then, Croatian National Bank (CNB) Governor Boris Vujcic stresses that Croatia’s obligation is to reduce its budget deficit below three percent of GDP in addition to reducing its public debt. It is envisaged that the conversion of the Croatian kuna to euro will happen at an exchange rate that has not changed for a quarter of a century: 7.53 kuna for 1 euro. This has provoked considerable reaction in Croatian business circles.

Diverging views on the impact of entry into the Eurozone

Among the economists who spoke out, Velimir Šonje, owner of the Arhivanalitika and a fierce supporter of the dominant neoliberal economic regime, expressed a positive outlook. According to his understanding , Croatia is already "euroised" anyway, as its economy has long been imbued with the euro. It follows that Croatia can comply with European Central Bank's monetary policy with full confidence, which responds to specific needs of member states by changing interest rates.

Professor at the Faculty of Economics in Zagreb, Ljubo Jurčić takes a different view . “The 7.53 exchange rate for the euro has strangled Croatian industry, because domestic production does not pay off with it. That is why the last 25 years have been marked by investing in shopping centres and not in industry. As foreign goods are cheaper due to this exchange rate, it is not worth producing here at all." In Jurčić’s opinion, even if the exchange rate doubled the price of the kuna against the euro, nothing would change because the domestic industry has already been "killed" by the exchange rate which privileged imports for the last quarter of a century. "With the ERM, we have further buried ourselves at the bottom of the European Union and are becoming what Kosovo was in the former Yugoslavia. “We will be on the infusion drip of Europe, depending on aid funds for poor countries”, concluded Jurčić.

For Ivan Lovrinović, also a professor at the Faculty of Economics in Zagreb, entry to the Eurozone satisfies Prime Minister Plenković's desire to transfer responsibility for the approaching recession, caused by COVID-19. "The main motive of Plenković's government is to 'stick' to the Eurozone, because by entering the Exchange Rate Mechanism II (ERM-II), it is counting on a single rehabilitation and remediation mechanism. If an even bigger crisis occurs in Croatia, and it will occur quickly, Plenković will only need to report to Brussels. So, for his incompetence and the incompetence of his government, he wants to have recourse to Brussels so that others can treat the ailing Croatian economy." According to Lovrinović, no reasonable person is carrying out the conversion in a situation when the Eurozone itself is shaking and when the corona crisis is threatening the European and world economy.

Trade between Croatia and the rest of the EU (in millions of euros, exports are in red and imports in blue). Exports are continuously twice as small as imports (source: DSZ).

We talked with Višnja Vukov  from the Department of Political and Social Sciences at Pompeu Fabra University in Barcelona about Croatia's Eurozone entry and trade relations with other countries. Vukov’s expertise encompasses the political economy and models of managing European integration, the consequences that such integration can have on the capacities of integrated states, and the development paths of peripheral EU states.

According to Vukov, the decision to join the Eurozone is just a continuation of a long-standing policy of monetary stability, and is actually a logical step considering the high level of debt euroisation in Croatia. "In these circumstances, giving up alleged monetary sovereignty is not really a big loss because the room for manoeuvre for monetary policy has been significantly narrowed anyway. Similar restrictions are present when setting the exchange rate for the euro – due to the high level of debt euroisation it would be difficult to use this moment to devalue the Croatian kuna, even if in theory such devaluation could help price competitiveness for Croatian exporters."

In such a situation, Vukov stresses the importance of providing other forms of incentive that would increase the competitiveness of exports based on quality. Examples include more favourable loans, using the Croatian Bank for Reconstruction and Development, investment incentives for knowledge-based sectors and those with high added value, and a strategic approach to attract the kind of foreign investment that can help the development of the Croatian economy, bringing knowledge and technology, not just capital.

What will be the overall impact of entry into the Eurozone upon Croatia's economy?

Joining the euro will mean the possibility of cheaper borrowing and easier access to the financial market, which both the government and the Croatian National Bank (CNB) point out as one of the main motives for joining. This is also demonstrated by the experience of other countries, especially in southern Europe, which saw large inflows of capital after joining the euro. The key challenge is to find a way to use such capital inflows, and the possibility of easier borrowing for economic transformation and investment in sustainable development, instead of unsustainable booms in the real estate market or simply facilitating the financing of the existing clientelistic network.

The dominance of tourism and the low share of industry mean that we have to import goods. Also, compared to other Eastern European countries, Croatia is poorly integrated into the so-called global value chains, in which other countries have joined through foreign investment in industry. On the other hand, thanks to tourism, Croatia is a net exporter to the EU when it comes to services. Integration into the common market usually means increased specialisation for individual economies. In such a division of roles in the European market, Croatia is increasingly taking on the role of landlords/renters, waiters and maids. The high share of short-term employment contracts and the stagnation of real wages are just some of the consequences of reliance on tourism. In the 2016 European Quality of Life Survey , 71 percent of respondents in Croatia said that they had a hard time making ends meet, while the EU average was 39 percent.

How are trade relations changing within the Western Balkans?

Trade with the Western Balkans is somewhat different, and the balance is positive because most of these countries have experienced an even greater economic decline and collapse of industrial capacity than Croatia, though they also started from a relatively weaker starting position. So, the impression that the relative relations between the states of the former Socialist Federal Republic of Yugoslavia (SFRY) remain very similar is correct. The difference is that relations within the region today are increasingly determined by the relations of each of these countries with richer economies outside the region. For example, in recent years, Serbia has seen a high increase in foreign investment in industry, especially in the automotive industry, and is increasingly integrating into global value chains, and I believe this will affect its trade relations with its neighbours in the future.

How would you assess Croatia's success in terms of its economic transformation and EU integration so far?

Croatia's economic transformation and integration into the European Union could be assessed as relatively unsuccessful, especially compared to other countries that have faced similar challenges in building a market economy and integrating with the European market. Just a few indicators: In 2019, Croatia's GDP per capita was 65 percent of the EU average, almost at the same level as 2008, when it was 63 percent. In the same period, from 2008 to 2019, Poland's GDP grew from 56 percent to 73 percent of the European average, and Romania's from 52 percent to 69 percent. Between 2000 and 2018, in Eastern Europe's new EU member states, real wages per person in employment rose by an average of about 50 percent, while in Croatia they stagnated. Other new members have also made some progress towards transforming into knowledge-based economies, with increased investment in research and development, where Croatia is also lagging behind. In other words, Croatia shows weaker convergence with the EU in economic growth, wages and knowledge-based development than most other Eastern European countries, although many of them inherited a less favourable economic structure from the Socialist period.

Joining the EU means integration into the common market with some of the most developed countries in the world, and this process, of course, brings with it specific challenges and dangers, because entire sectors can easily disappear under the pressure of such competition. But such integration also brings opportunities, from capital inflows and easier access to financial markets, to opportunities to expand into new markets and easier access to new technologies that can enhance existing economic capacities. While the countries of Central and Eastern Europe have managed to seize at least some of these opportunities, Croatia has been much less successful in this regard. There are several reasons for this, and among the most important I would single out a specific approach to privatisation that created the so-called 'partnership' capitalism in a network of clientelistic relations, and the possibility of relying on tourism as a relatively easy source of income, which reduces the pressure and the need to look for economic opportunities in more complex and technologically demanding sectors.

Is it fair to say that the COVID-19 pandemic has once again highlighted the problem of Croatia as a monocultural country oriented almost exclusively to tourism?

Excessive reliance on tourism is indeed one of the main problems of the Croatian economy, and not only because tourism has proven vulnerable to various shocks, such as a pandemic. Even in the best of times, tourism is a sector of low technology and low intensity of knowledge and creates primarily precarious and relatively poorly paid jobs of a seasonal nature. The reasons for such monocultural development are not only the geographical position, but also the decline of other sectors, especially industry. Unlike many Eastern European countries where governments have prioritised maintaining and improving industrial capacity, even at the cost of relying primarily on foreign direct investment, Croatian governments have allowed existing industry to collapse.

The development of industry, and in particular of sectors based on high technology and knowledge, generally requires a capable state that provides incentives for development and investment in various ways, with the aim to attract both foreign or domestic investors. Croatian governments, on the other hand, have not engaged in such development policies, especially compared to other countries, and the dominant approach seems to have been that, by relying on tourism and SMEs, the knowledge-based economy will simply emerge on its own. The consequences are varied: from the already mentioned low quality, precarious and low-paid jobs, to the associated high emigration. At the same time, tourism, especially through VAT, is a relatively easy source of revenue to fill the state budget.