After months of delays, the von der Leyen Commission is finally set to take office on the first of December. What did the last few months involve, and why did it take so long? 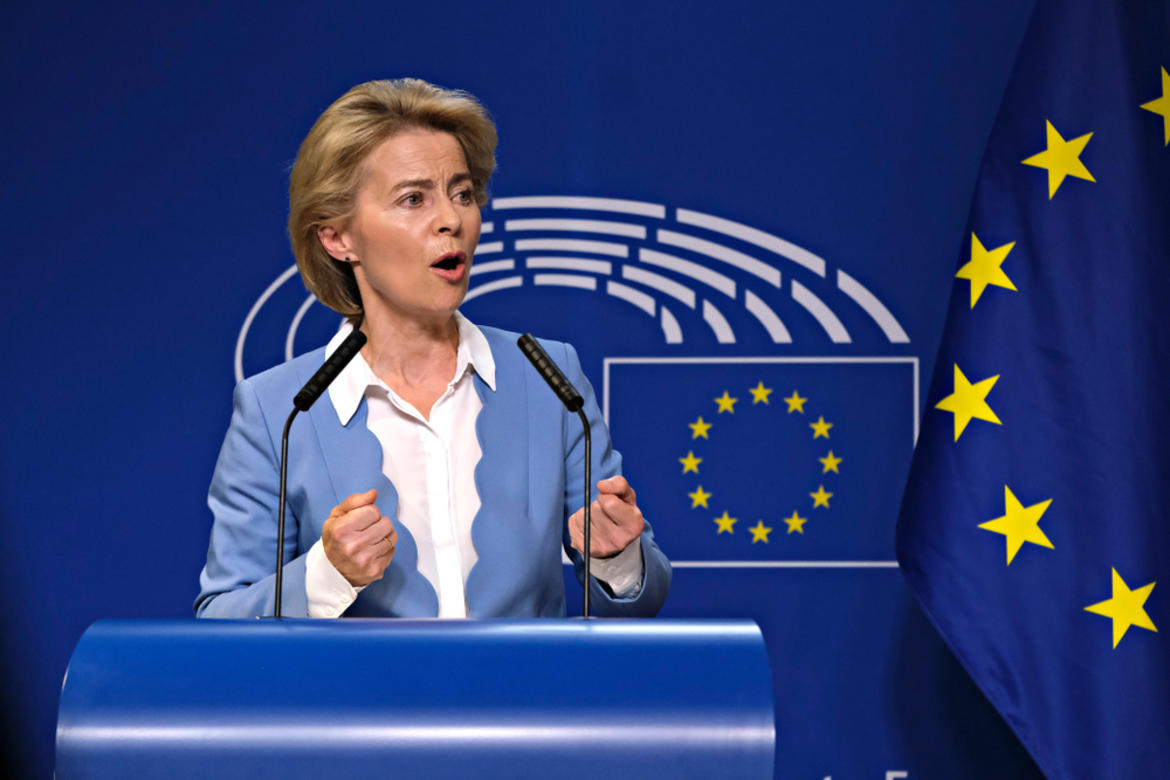 Yesterday afternoon, 27 November, the European Parliament gave its support to the European Commission led by Ursula von der Leyen. The journey has been long and tortuous – starting with the vote last July when a majority of only nine MEPs approved the nomination of von der Leyen. Almost sixty members of parliamentary groups officially supporting von der Leyen (European People’s Party, liberals and social-democrats) voted against the nomination. The votes of some ultra-conservative Polish MEPs from ECR and other independents, as well as MEPs from Italy’s Five Star Movement, proved decisive.

Yesterday, with 461 votes in favour, 157 against, and 89 abstentions, the von der Leyen Commission was finally given the green light. It will officially take office on 1 December, with the goal of making Europe a “driving force” with a “leading role” on the international stage. More specifically, the new Commission main concerns will be sustainable development, the environment and gender parity.

Nominations for the Commission: not an easy start

The problems for von der Leyen began with the allocation of portfolios to Commissioners. Some found it questionable that one of the 26 Commissioners would be responsible for something only defined as protecting “the European way of life”, while others criticised the creation of super-portfolios, such as that for the internal market and defense industry.

The rejection of the Hungarian and Romanian commissioners was no big surprise: Trócsányi is one of Orbàn’s right-hand men, and one of the architects of the liberticidal Hungarian justice system reform. Plumb, on the other hand, was nominated by a government currently quarreling with the EU, and undergoing a major crisis.

In contrast, the rejection of Sylvie Goulard caused major upset, and led to tensions between Paris and Brussels. Officially, France’s candidate was rejected due to an alleged conflict of interest involving payments received from an American think-tank. Unofficially, it appears that the Parliament wanted to send a strong signal to France: Macron’s assertiveness in Brussels, initiating negotiations between government leaders and taking it as given that the Spitzenkandidat system wasn’t being respected, didn’t please everyone, especially not the German MEPs. Macron’s reaction to the rejection of Goulard was incendiary. Besides strongly rejecting the idea of scaling back the responsibilities entrusted to the French Commissioner, Macron demanded explanations from von der Leyen during a press conference, where the French President looked visibly troubled. It seemed, at least momentarily, that relations between Macron and von der Leyen had already become chilly before the Commission had even been launched.

However, in recent weeks new Commissioners for the three countries have been approved: Olivér Várhelyi for Hungary, Adina-Ioana Vălean for Romania and Thierry Breton - former finance minister for Sarkozy in 2006 - for France. Meanwhile, the much-discussed portfolio concerning the “protection of the European way of life” has been diplomatically redefined as “promotion of the European way of life”. Finally, the Commission was formed.
Certain characteristics of the new Commission are revealed by analysing its composition. Starting from the fact that many Commissioners have been reconfirmed: 8 out of the 26 Commissioners chosen by von der Leyen were already part of Juncker's team. 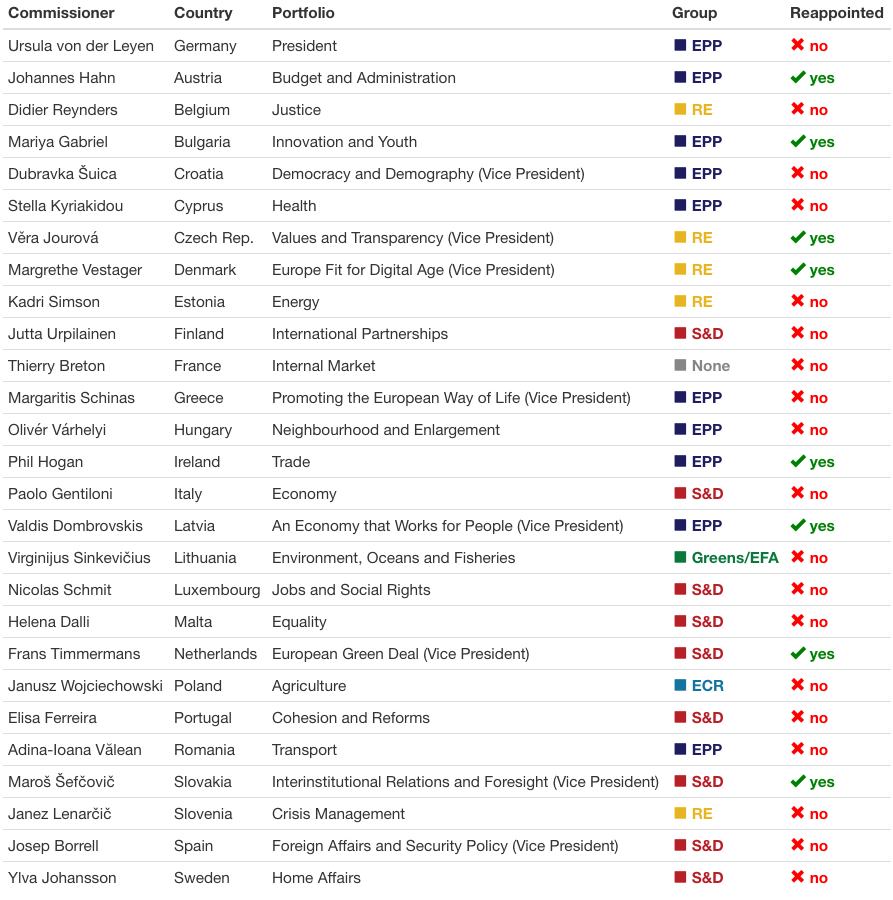 There is substantial gender parity among the 27 commissioners: 15 men and 12 women. The average age is over 55, with only one commissioner under the age of 40 (Lithuania’s Sinkevičius). 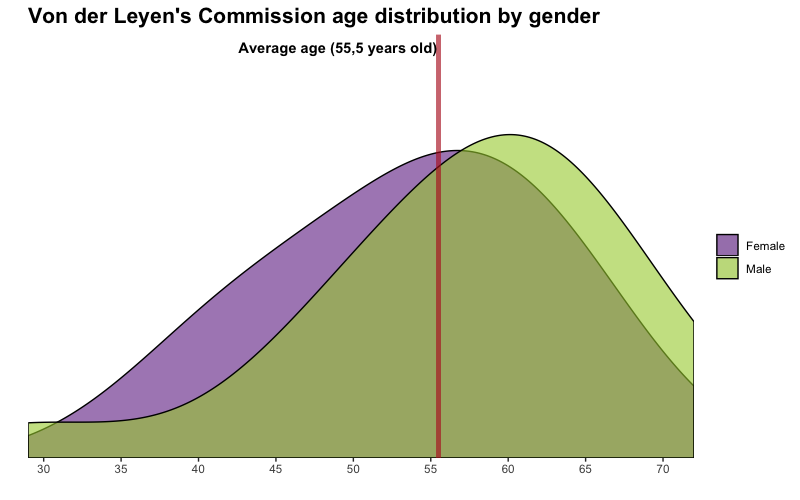 Looking instead at the geographical distribution of Commissioners, it is clear how the axis of the European centre-right has shifted east. With the exceptions of Ireland, Germany and Austria, most of the EPP Commissioners come from countries that became part of the EU after the last decade’s great enlargement to the east. On the other hand, the other parliamentary groups represented in the Commission are more evenly distributed. 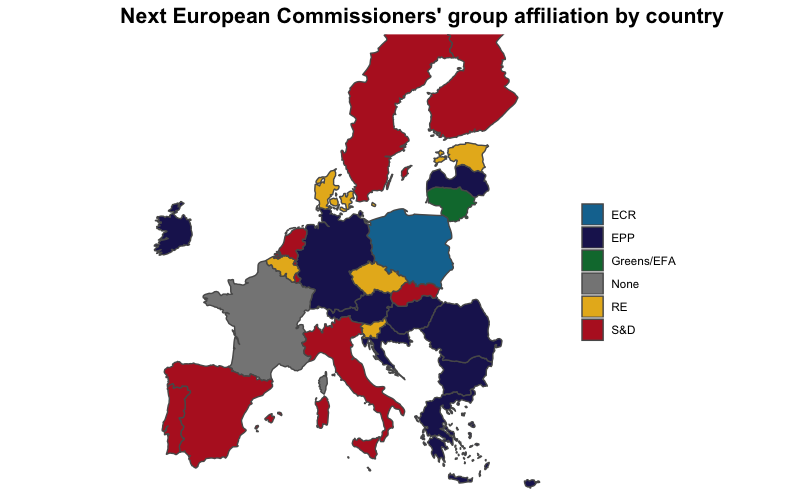 In recent weeks, member state diplomats in Brussels reminded von der Leyen that she could not continue giving in to the Parliament (as happened during the hearings process for the Commissioners) without considering the will of the European Council. After all, the Council nominated von der Leyen, and is the decision maker in the last instance on the most critical issues.

Now, finally, the EU has an executive. The limits of multi-level governance notwithstanding, the Commission will have to face one of the most delicate quinquennials in European history. The nativism from the right, riding the recent waves of migration, is far from a passing phenomenon, and is transforming the political panorama of the continent. Meanwhile, the commissioners will have to come up with responses to other fundamental questions about how to secure Europe a strong position in the future: data governance, a transversal approach to environmental issues, and integration in the fields of security and diplomacy.

As von der Leyen has declared: “over the next five years, our Union will embark together on a transformation which will touch every part of our society and of our economy; and we will do it, because it’s the right thing to do. Not because it will be easy”.

The plan is to reignite the European economy with a Green New Deal, which hinges on a legislative proposal to be presented within the first one hundred days of taking office. The aim is to reach zero emissions by 2050 and change European industrial strategy profoundly. According to von der Leyen, it will be “an industrial strategy that enables our businesses – big and small – to innovate and to develop new technologies while creating new markets”. This will render the European Union a “global standard setter”.