Public debt: Europe is not that scary

After the subprime crisis, Europe experienced major disturbances due to international investors not believing that some Eurozone countries could pay off their public debt. So, what is state of affairs today? 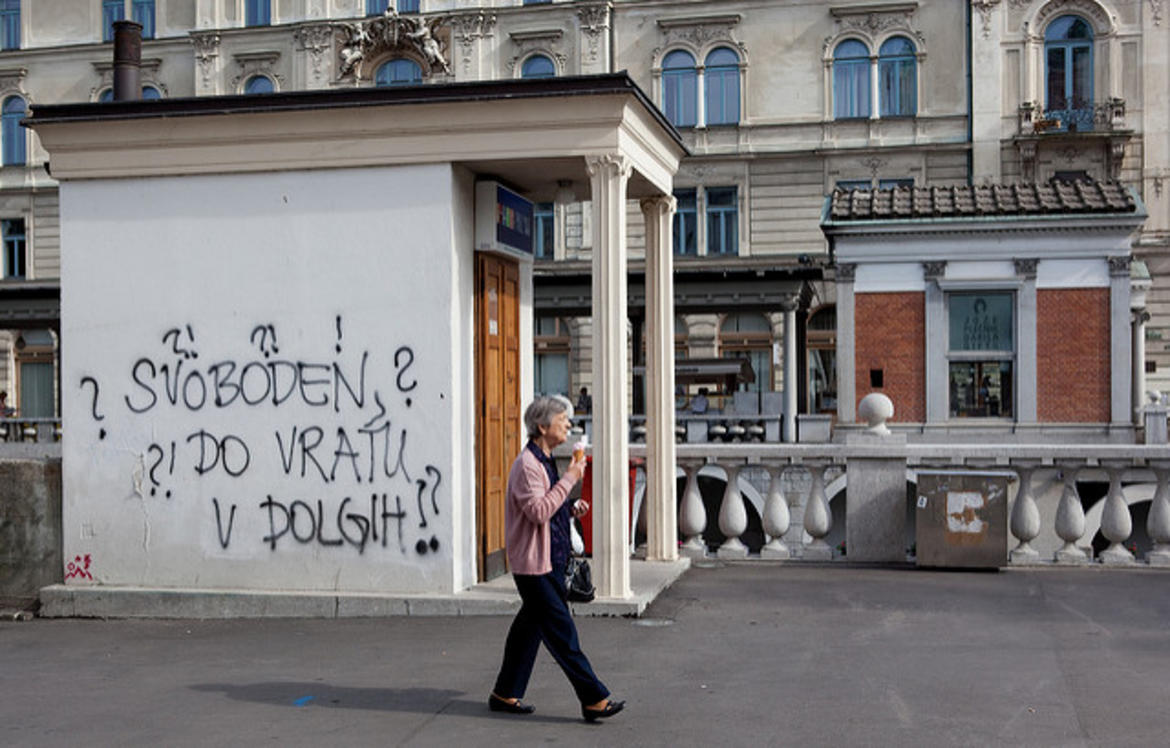 Photo: Slovenie : "Freedom? When I am up to my neck in debt?". Lars Plougmann/Flickr

While Europe has regained its strength, some countries are still experiencing high levels of debt and their labor markets already seem to be slowing down. Should we be concerned about a new public-debt crisis?

1. How has public debt changed over time?

To really understand how European debt works, you have to take a step back. When you look at this from an historic point of view, starting with the end of WWII, you can see that public debt enjoyed virtually steady growth until the end of the 1970s. It was only the turmoil coming from the Italian economy that led to rising debt starting in the 1960s. According to Bruno Tinel, an economist who works at the University of Paris 1-Pantheon-Sorbonne, this trend can be seen in industrialized countries outside of Europe and it represents “stylized facts from the neoliberal period.”

First, you can see a sharp rise in interest rates from the end of the 1970s to the middle of the 1990s. With all the attention on fighting inflation, central banks greatly increased their own rates. Hence, the price of the debt climbed and a growing part of that debt was being used to pay off the old debt. This created a devastating snowball effect.
Then you have the tax cuts starting in the 1980s, which would be expanded in the early 2000s. The tax rate was cut for high-income earners, companies and capital. (In the case of countries, capital tax cuts were achieved in a more tiered-like fashion.) Less tax revenue contributes to a rise in the deficit and the debt, unless drastic spending cuts are implemented, which then puts a strain on growth.
It should be noted that the rise in social inequalities, occurring at a time when you have an increase in wealth, translates into increasingly more income gravitating to those who prefer to save than consume. Also, when you have shareholder-based capitalism, the profits are more likely to turn into dividends instead of investments. Moreover, there are just as many factors constricting the growth rate and causing the debt-to-GDP ratio to rise. In the end, European countries suffered in the aftermath of the subprime crisis which, in part, can be blamed on financial liberalization policies and the rise of the housing bubble.
Strong monetary policies, cuts in tax revenue, the financialization of the economy, the rise in inequalities, and financial deregulation, make up just a few of the elements behind the surge in Europe’s public debt.

Who are the investors who have confidence in European countries?

The so-called quantitative easing monetary policies — basically, the purchasing of public debt securities by central banks in the eurozone on behalf of the European Central Bank (ECB) — have changed the playing field. The amount of domestic investors has grown significantly. Also, national central banks hold about 20 percent of public debts. As a result, the influence wielded by foreign investors has declined.

Starting in January of 2019, the ECB will no longer purchase public-debt securities. Will this have an effect on its ability to finance? Theoretically, no. And there are two reasons for this. The first reason is because whenever securities already held expire, the central bank will continue reinvesting money in new debt. The second reason is that investors on the hunt for new and risk-free opportunities in Europe are witnessing a vanishing of the German debt. In short, the country’s budget surplus will rise and it will be pay off its old debt without creating new debt. Investors should increasingly be setting their sights on the debts of other countries.

3. What has this money been used for?

Debt that is controlled and financed can still become a concern if funds have not been handled properly. But this is no longer the case in Europe. A simple indication makes this clear. Simply recalculate the budget deficit, excluding public-investment spending. If the deficit stays the same, or even grows, that means operating expenditures are on the rise and the debt repayment has increased compared to tax revenue. If sustainable, this is a bad sign.

What does it all mean?

Since the 2000s, the budget balance for the entire eurozone (not including public investment) had exceeded 0.4 percent of GDP. Therefore, the debt of these countries was basically used to finance all investment. This was even the case with small surpluses left behind from previous administrations. Only the years where there was a strong slowdown in the labor market (during the the subprime and eurozone crisis) did you see degraded, and even severely degraded conditions in countries like Spain or Portugal. (This analysis does not include the anomaly of Greece.) But all of these countries have either returned, or have almost returned, to healthier structural environments. But, it is still hard to predict the future.

4. Should we be concerned about costs?

In public discourse, we have developed the habit of measuring public debt as a percentage of GDP. It is trendy and it helps with international comparisons. But it does not make much sense economically. The debt is accumulated stock that is reduced to an income stream, bringing in a year’s worth of production in wealth. And there is no predetermined debt-to-GDP level that will allow us to know if the level is sustainable or not.

What makes more sense is to focus on the cost of the debt. The interests paid each year as a percentage of GDP brings in cash. And the rapid rise in the ratio indicates a clear problem. From this standpoint, the long-term cost of public debt in European countries is clearly trending downward.

Whenever central banks have supported restrictive monetary policies to combat inflation, the interest rate has soared. This was the case with interest paid on the public debt in the mid-1990s. Some countries even reach 5 percent of GDP. In the case of Italy, its rate climbed as high as 10 percent. Since then, the debt has continued to decline.

The prospect of the eurozone won over the trust of investors. In large part, they did not not charge a great deal to finance European public debt. At times, they were overzealous and did not have enough faith in some countries to pay off their debt, as in the case of Greece. Subsequently, the amount of global savings available for investing reached a level that was higher than companies and governments were willing to invest, thereby pushing down the cost of money and interest rates.

Therefore, the end of quantitative easing will be very gradual given that, for now, the ECB is going to reinvest what it receives in reimbursements. No terms have been set, however. In fact, the ECB indicated that only after the Summer of 2019 would it gradually raise its interests rates.

In short, the declining volume of the German debt, as we have seen, should motivate investors to purchase European debt, which will also contribute to keeping the cost low. However, this is a trend that could, at any moment, jeopardize the budgetary policy decisions of each of the countries. We have already seen signs of investor nervousness after announcements made by the new majority in Italy.

Are there any concerns regarding the European debt situation? Yes. There are three.

The first concern is that, while current levels seems to be low-priced and feasible for almost all of the countries, any new, major crisis that emerges (tensions in the eurozone over Italy’s budget woes, a hard Brexit, the dismal bankruptcy of Deutsche Bank, etc.) could bring the debt to riskier and less controllable levels. Apart from Germany and its low levels of debt, it is up to the other European countries to control the pace of their public deficit and debt in order to maintain some budgetary wiggle room should a new crisis threaten the region.

The second concern is that, in addition to the cyclical events, you have rising-debt structural trends, which are giving rise to an anti-tax ideology by governments of all persuasions. In France, President Macron is moving in the same direction, adopting the same intentional rhetoric of debt reduction, all while eliminating the means to achieve it by cutting tax revenue. Also, the European Commission still seems to believe that tax cuts are good per se, but yet it is still calling for control of deficits.

And thirdly, if we are going to worry about the debt, why not look at what is happening on the side with private stakeholders? From this point of view, the situation throughout European countries seems very uneven. The debt of Portuguese and Spanish companies appears to be increasingly under control. Germany companies are posting low levels of debt. But this is a sign of under-investing, which could be harmful in the medium term as long as the poor health of the Italian banking sector is putting the breaks on financing the economy. The opposite holds true for France. It has gone off on its own in the zone. Its companies are posting strong growth and levels of indebtedness much higher those of public stakeholders. While a portion of its resources has allowed it to enhance its treasuries, large French companies seem to still be playing a dangerous game of speculation. The net debt (the debt minus the treasury) tends to rise faster than the value added (the wealth from manufacturing activity). These are all signs of delayed growth between financial activity and the real economy.

Finally, if we are going to talk about the debt, let us foster vigorous discussion on the levels and the dynamics involved in private debt. This can also reveal existing dysfunction in European economies.