MEPs in Strasbourg: everywhere but the plenary

The practice of empty chambers is not limited to the European Parliament. There are some good reasons behind it, but the pratice also highlights some problems with the EU's policy-making. 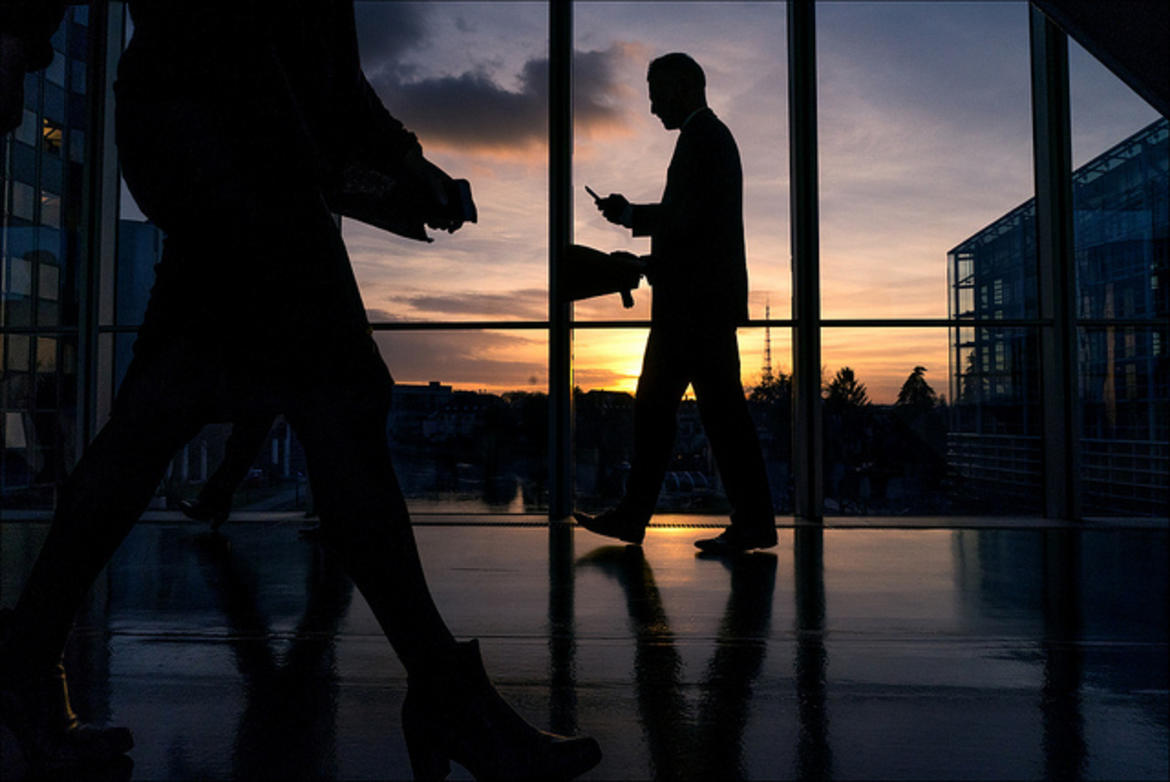 On January 15, during a plenary debate with Austrian chancellor Sebastian Kurz, two centre-right German MEPs could be seen reading newspapers. Something was amusing, apparently. MEP Werner Langen showed the front page of the broadsheet Bild newspaper to his European People's Party (EPP) colleague Jens Gieseke, who laughed. In any case, the contents of Bild, and several other newspapers, were apparently more interesting to Langen than his colleagues' speeches, delivered in response to Kurz' opening statement. Gieseke could also be seen writing postcards.

This is not to pick on these two MEPs in particular, or the EPP, the largest political group in the European Parliament, in general. Watching MEPs' behaviour during the plenary session in Strasbourg shows that members from across Europe and from all political backgrounds display behaviour that a school teacher would not allow.

They walk around to chat with other MEPs, leave the room to take a phone call, or make that all-too-familiar scrolling movement on their smartphone or tablet, to refresh a social media page. Even Kurz himself seemed not to listen to one of the MEPs at one point, while typing on his smartphone instead. The chancellor was there to discuss the achievements of Austria's six-month EU presidency.

In their defence, the typing can sometimes be related to sending out tweets with comments on the debate. But EPP member Wim van de Camp told EUobserver that, on one occasion, he saw a fellow MEP visiting an online shoe shop while in the plenary chamber.

At least they were there

Meanwhile, Gieseke, Langen, and some others had, at least, bothered to show up. When the debate with Kurz began on Tuesday morning at 10.30am, EUobserver counted a mere 52 MEPs in the plenary hall – there are 750 of them, excluding the president. This number increased to 132 by the end of the debate, which was, in any case, more a collection of short speeches than a genuine discussion.

There was also a strong correlation between the amount of praise and how close that MEP's political party was to the ideology of Kurz. The format was one of the reasons why many MEPs skipped it: there were no opportunities for spontaneous interventions, but only for speeches from one MEP from each of the eight political groups (and one independent member), which had been scheduled in advance. In that sense, MEPs might as well watch it on TV screens in their offices instead.

Another reason given to EUobserver was that it was not so useful to have a debate looking back at the last six months. In that sense, a debate with Romania's prime minister ought to have attracted a larger audience, since Romania took over the EU presidency from Austria on 1 January for the next six months. But Romanian leader Viorica Dancila also faced a tiny group of MEPs (69) when she spoke at the EU assembly on Tuesday.

Sorry you have left

Liberal leader Guy Verhofstadt, a Belgian MEP, heavily criticised the centre-left Romanian prime minister, expressing his worry about the state of rule of law in the eastern European country, which joined the EU in 2007. But by the time Dancila's slot to respond had come up on the clock, the former Belgian prime minister had left. "Mr Verhofstadt, I am sorry you have left the chamber already," she said.

The debates with government leaders on the future of Europe, introduced by EU Parliament's president Antonio Tajani after the vote for Brexit in 2016, seem to be working better than the presidency ones. The debate with Spanish prime minister Pedro Sanchez, on Wednesday, was at least better attended, with some 200 MEPs present. It overran by some 40 minutes, as dozens of MEPs wanted to ask Sanchez a question or give a comment.

German Green MEP Ska Keller told EUobserver that one cannot expect MEPs to attend plenary all of the time – it is something they do only when it is time to vote on legislative files and resolutions. During the 12-times-a-year Strasbourg sessions, MEPs also have meetings with their own political groups, discussions on bills, meetings with journalists, and host visitors.

"I don't expect all the members to sit here, because then they are not doing their other work," said Keller. "We have a crazy amount of legislation on all of our desks. We're all really busy," she added. On top of this, much of the actual political negotiations get done at committee level, in Brussels. That sometimes makes tabling it to the plenary a rubber-stamping exercise.

Dutch MEP Wim van de Camp, for example, presented a resolution on autonomous driving on Monday evening. He said four people showed up. "I am not so sensitive, so I can handle it, but it was disappointing," said Van de Camp. He noted that the practice of empty chambers was not limited to the European Parliament, as did some of his colleagues.

"If you look at national parliaments you will see absolutely the same thing: there are always complaints there about empty chambers unless it's a moment of big political theatre," said British Greens MEP Jean Lambert. While that may be the case, there is a still a big difference. The European level of government is not as self-evident as the national one.

The very existence and need of the EU is being put to the test, with a key member state now planning to leave . It is why there is perhaps more criticism of those parts of the EU's decision-making process that happen behind closed doors, while such practices are deemed perfectly acceptable at national level . More than ever, MEPs have to be on their best behaviour.

To individual MEPs it may seem unfair that they are being scrutinised closer than MPs at home. Perhaps they are right. But the effect of their actions on the image of European politics cannot be dismissed. The European Parliament has had to fight hard to be taken seriously by government leaders.

Citizens going to the polls in May to vote in the next generation of MEPs might well expect their EU representatives to at least show up during important debates with European leaders. If the format of the debate is not sexy enough, then the Parliament is free to change the set-up. And one important change could be the order of speakers. As things stand, the invited guest gives a speech and is followed by several rounds of MEPs' speeches, in the order of group size.

To her credit, Romanian PM Dancila was frantically scribbling during those rounds, and made an effort to answer each MEP's address individually. But there are also cases of leaders of European Commissioners who use the 'bulk method' of answering all MEPs at the same time, so as to respond only to the easiest questions.

Absenteeism during debates with government leaders is nothing new . According to the book The European Council by Dutch veteran journalist Jan Werts, a presidency debate in 2005 was attended by less than 10 percent of MEPs.

In 2017, EU Commission's president Jean-Claude Juncker called the EU Parliament "very ridiculous" for showing up in low numbers to hear Malta's PM speak – although six months later he made no such remarks when Estonia's PM had a similarly small audience .

But an empty chamber sends an important message to the speaker, who needs to feel that their actions are being closely monitored by democratically elected MEPs. EU commissioner for the euro Valdis Dombrovskis articulated the issue at stake at Tuesday's debate with the ECB chief. "A debate on the European Central Bank's activities by the European Parliament is an important manifestation of democratic accountability," he said. But by EUobserver's count, less than 30 MEPs were in the room listening to Draghi's speech.

Considering how important the euro is to citizens' daily life, and, consequently how vital democratic control of the independently operating ECB ought to be, the contrast was all the more striking with a debate that happened the next day. On Wednesday morning, more than 200 MEPs showed up to a debate that started at 8:30AM.

It was a discussion about the outcome of the vote in the House of Commons on the Brexit withdrawal deal. An interesting issue for sure, but something which MEPs can do absolutely nothing about. Perhaps a shift in priorities is in order.