In order to increase security, capacity and competitiveness of European railways, the European Commission is encouraging the adoption of a common railway signage system throughout the entire EU, which is called ERTMS. Its implementation is much more expensive and slow than anticipated however. 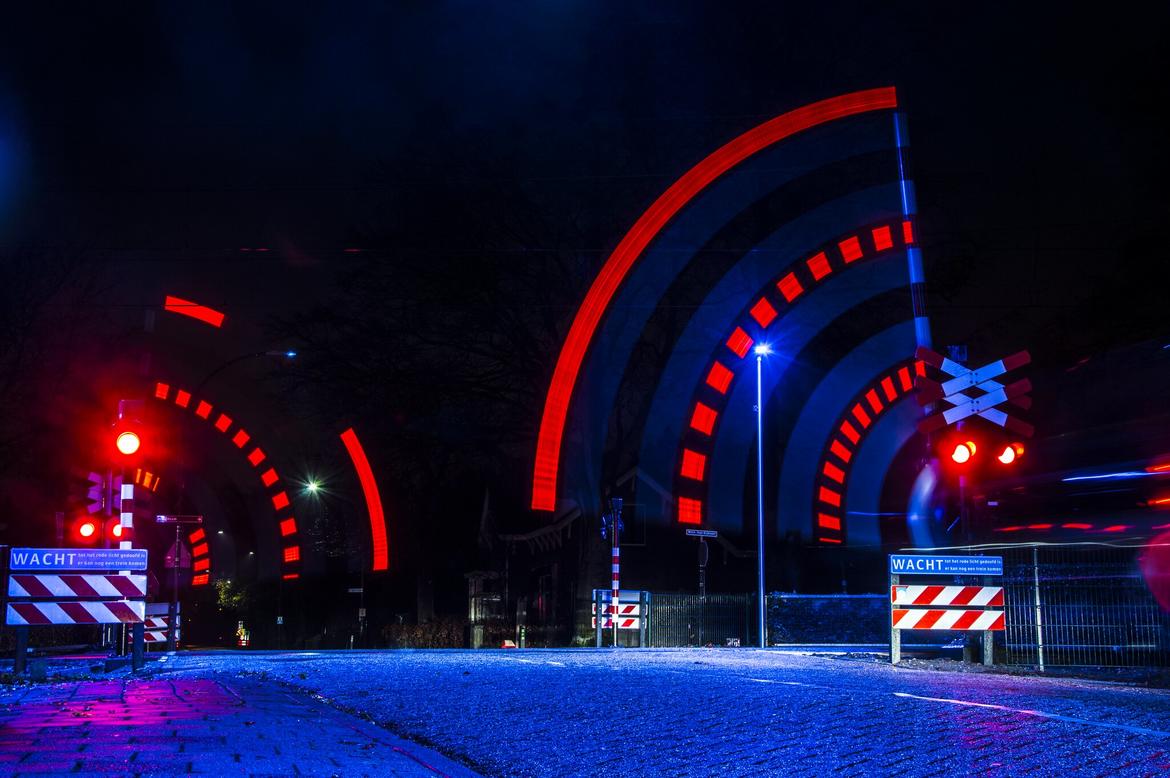 The European Rail Traffic Management System (ERTMS) is a modern control-command system for signage and communication, which has been under constant development since the beginning of the 1990s by the European railway industry, with the support of the European Commission. The aim is to replace the 20 different signage systems that exist in Europe with one common system which will allow trains to move effortlessly from country to country. Dysfunctional national railway networks are given support in order to enhance their security, capacity and competitiveness. This system has been jointly developed by 8 companies: Alstom Transport, AZD Praha, Bombardier Transportation, CAF, Hitachi Rail STS, Mermec, Siemens Mobility, and Thales.

The ERTMS has two parts, the European Train Control System (ETCS) and the Global System for Mobile Communications-Railway (GSM-R). ETCS is the main pillar of the overall traffic management system, which is why people often mix the two.

The ETCS works on two sub-systems, consisting of the equipment placed on rail tracks, such as a radio transmitter (Eurobalise) which saves relevant data, such as speed limits, position reports and slopes; and the equipment which is placed on the train, such as antennas and special components in the engine.

ETCS equipment on board (source: European Court of Auditors)

The different devices on tracks and trains constantly exchange information, enabling a continuous monitoring of the maximum permissible operating speed, and providing the driver with all the information required to control the vehicle. For example, as Greek driver Kostas Genidounias explains, if a train is moving at excessive speed, “the ETCS triggers a sound alert in the driver’s cab. If the driver doesn’t slow down, the train will come to an abrupt stop”. Dashboard indicators alert the driver to reduce speed when a traffic light is red or when the train is getting close to a side-pass, and take note of specific points where radio frequencies are attached to the traffic lights.

Depending on how information is transmitted within a train, two levels of control have been developed: Level 1, where the train communicates with the tracks through radio frequencies (beacons), as described above, and Level 2, where communication is established through the mobile communications system GSM-R frequencies, which are also used for mobile telephone networks but specifically modulated here for railways. What is worth noting is that over the years various versions of ETCS have been developed. As we’ll see below, since the system is being constantly developed in order to adapt to technological advances, compatibility problems inevitably arise between track and vehicle equipment.

Huge delays in the implementation of ERTMS

Despite its usefulness, ERTMS is still miles from being considered a “success story” for the European Commission. The Commission has been designing policies and providing considerable financial support in order to establish ERTMS as the single European system for railway traffic management. According to a Special Report of the European Court of Auditors of 2017, between 2007 and 2020 about €4 billion where allocated to member states for the development of ERTMS.

Source: European Court of Auditors based on data from the European Commission.

The Special Report is no less revealing when it comes to the system’s derailment. A special control group by the European Court of Auditors conducted extensive research for a year and a half of, traveling to six countries and covering different parts of the EU's nine core railway network corridors. The European Court of Auditors noted that the development of ERTMS across the EU is still very low and fragmented, even if in principle the railway industry is on board with the overall idea of implementing it. 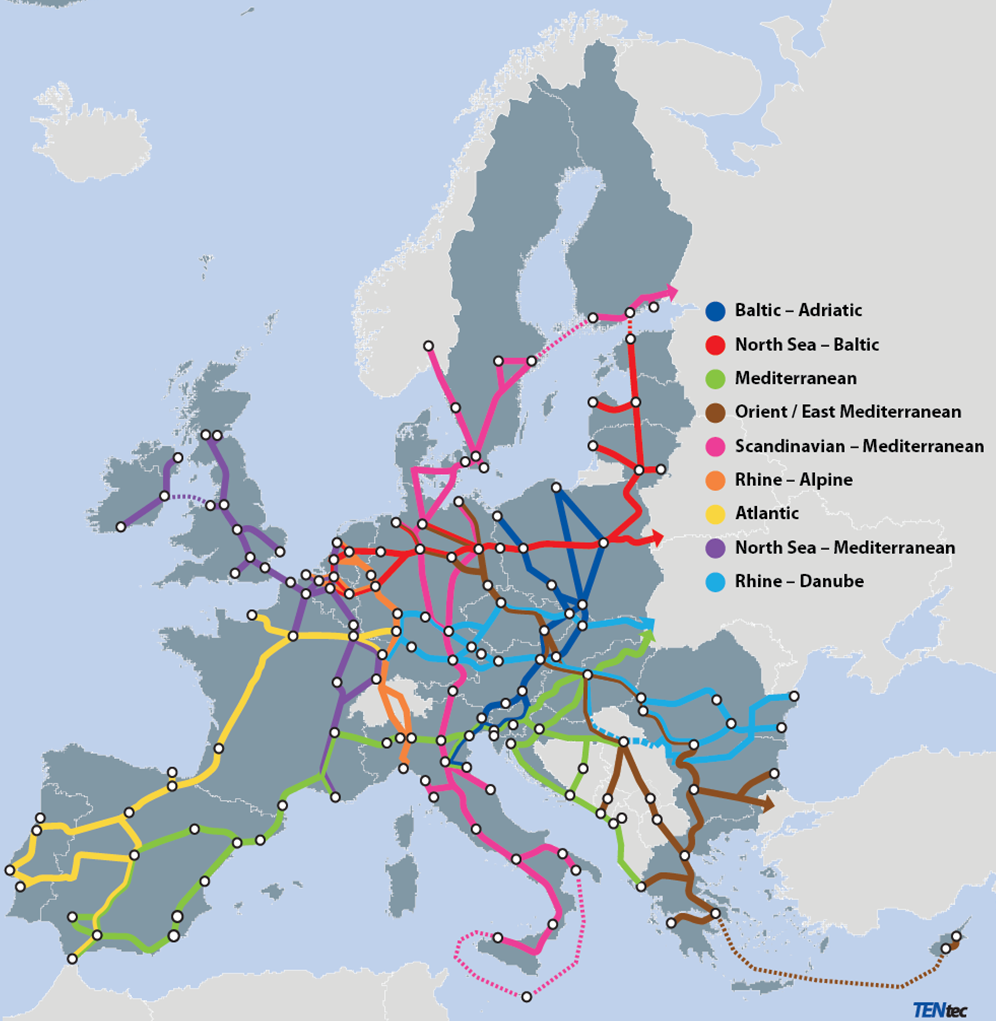 The first technical specifications for ERTMS interoperability, which are obligatory for high speed trains and the conventional railway system, became legally binding in 2002. The first official deadlines for ERTMS implementation were established by the European Commission with the 2009 European Deployment Plan, setting landmarks for 2015 and 2020. The 2012/88  decision by the Commission made it obligatory to install ERTMS in all railway projects funded by the EU.

Despite this, only about 8 per cent of the core network corridors were equipped with ERTMS in 2016. The Commission’s plan had thus been derailed. The Commission reviewed these goals with the new ERTMS European Deployment Plan of 2017, which moved the deadline for the core network corridors from 2015 to 2030. At that time the plan will be re-evaluated and specific coordinated deadlines will be set. 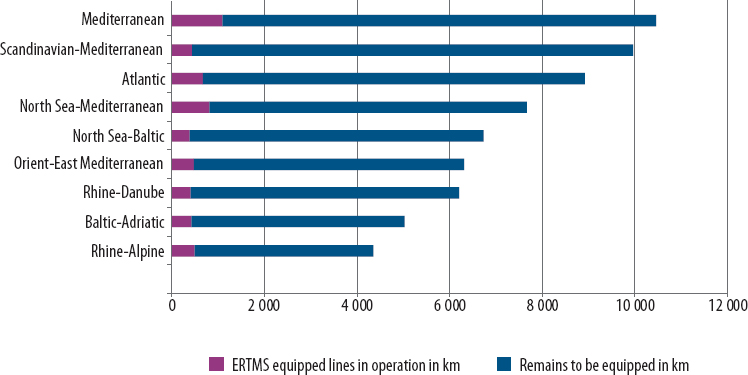 ERTMS deployment in core network corridors, as of the end of 2016 (in km) (source: European Court of Auditors based on data of the European Commission)

According to the 2018 Report on Rail Safety and Interoperability by the EU Agency for Railways, the application rate of ETSC on the core network corridors continued to be low in May 2018, reaching just 9 per cent, in contrast to GSM-R, which reached 57 per cent. Based on these numbers, the report highlights how the aim to cover 31 per cent of the core network corridors with ERTMS by 2023 – a goal set by the latest ERTMS Deployment Plan – is at risk.

Why ERTMS is being implemented too little, too slow

According to the European Court of Auditors' Special Report, the main reason why ERTMS has not been implemented so far is unwillingness on the part of many infrastructure managers and railway companies to invest in ERTMS equipment, due to both cost and feasibility. For instance, incentives are low in member states such as Germany, where the national rail system is already functioning well.

As the Special Report highlights, the Commission did not estimate the overall cost of the introduction of the new system when defining the funding for it. In order for ERTMS to be fully operational, the overall cost that infrastructure managers have to deal with is not just the cost of equipment and installation, but also other costs linked to the transition phase. In the same report, the Commission admits that “the costs occasionally noted in relation to the ERTMS include associated costs (up to 2/3) beyond those directly related to ERTMS, for example electricity, railway equipment and track key systems. The investments reflect the overall upgrading of the signage infrastructure, including past maintenance work that goes beyond the ERTMS investment. Such work may also be required in the case of replacement of obsolete signage systems beside the ERTMS or to handle ongoing maintenance work."

The European Court of Auditors calculated that the actual implementation cost of ERTMS, for both track and vehicle installations, could potentially reach €80 billion for the core network corridors. Regarding such a high cost, the European Commission provided only a vague response: “the overall cost can be reduced over time due to technological advancement, economy scales and increased competition among ERTMS providers."

ERTMS is integrated in the EU's national railway networks, including their signage systems. However, member states have chosen to develop ERTMS at different stages, or with solutions tailored to their national networks, while technical specifications for interoperability have evolved at an extremely rapid pace. This has hampered the overall system's stability, requiring subsequent upgrades to subsystems to ensure compatibility.