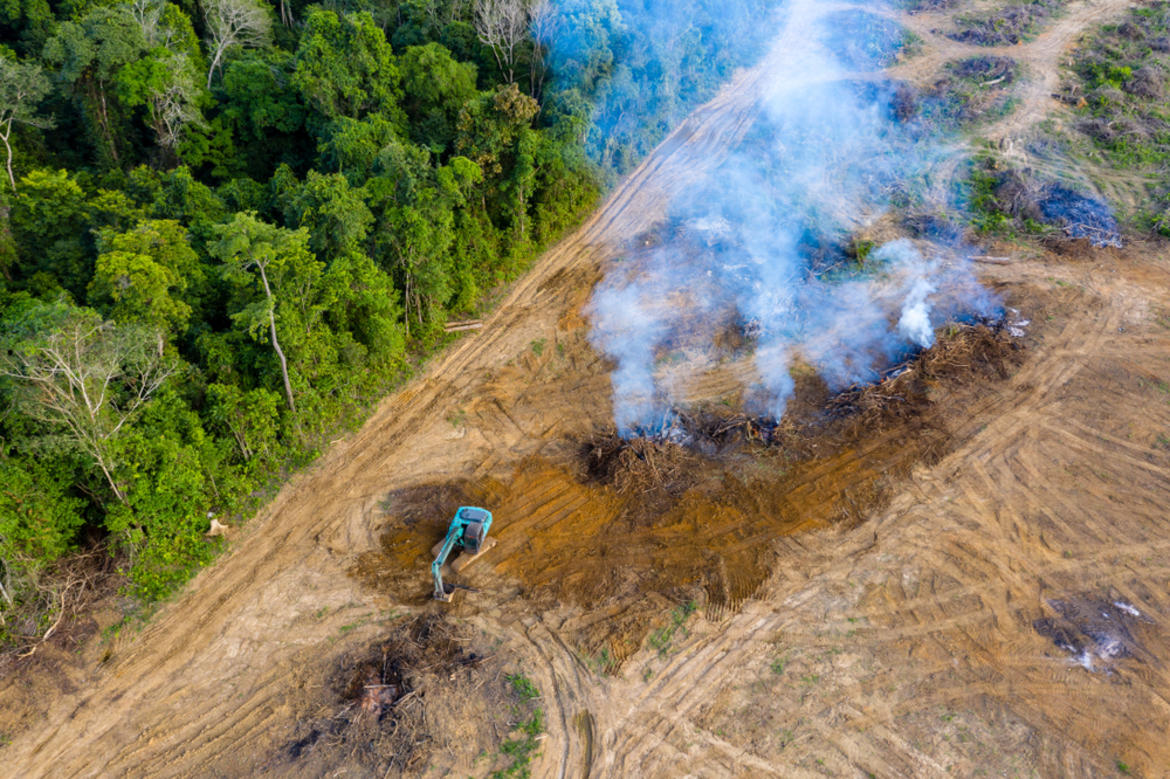 European banks, along with other financial institutions (insurance companies, pension funds and asset managers) have been involved in illegal land clearances for palm oil production in Indonesia. Such decisions may have been partially a cause in forest destruction and extra carbon emissions, fueling global warming.

Citizens across Europe have unintentionally contributed to this impact as their bank deposits and pension savings are turned by financial institutions into money for forest-risk commodity companies.

During the last seven years, finance providers in the EU, UK, Switzerland, Norway and Andorra have channelled large amounts of funding to palm oil producers sourcing their raw material from plantations where vegetation has been repeatedly burnt down, in breach of Indonesian law. The total area affected by fires from 2015 to 2019 equates to 112,687 hectares (10 times larger than Paris city center).

The European market imports huge/large volumes of palm oil from Indonesia, primarily to be refined into biodiesel to replace fossil fuel in the transport sector. It is also employed as a key ingredient in the food industry as well as in daily chemicals such as detergents, shampoo and cosmetics, thus making the palm oil sector a profitable business for creditors and investors.

Our investigation has matched individual institutions with palm oil groups by combining data shared by the Forest & Finance Coalition and Greenpeace. The former tracked financial flow records from its database. The latter cited figures from its reports of 2019 and 2020, which exposed the fires observed in all the agricultural concessions which supply palm oil fruits to mills and refineries. Such fires were only rarely prosecuted. Of all fires that occurred between 2015 and 2019 in concessions associated with palm oil groups funded by European financiers, only 15 were sanctioned. To note that 17,550 fires were recorded in 2019 only.

Most of the finance has been provided by banks through credit (loans and underwriting services) which totalled $ 2.18 billion (€ 1.8 billion) between 2013 and 2019. Additional funding has come in the form of investments (in bonds and shares) held by institutional investors, such as asset managers (including banks’ asset management arms), insurance companies and pension funds. Credit and investments have cross-funded a number of palm oil groups. Around 70% of all financial institutions involved (through credit and investments) in palm oil groups with fires are based in the Netherlands, Switzerland, UK, Germany and France. Those countries are also home to 100% of the banks providing credit. Their loans and underwritings helped set up the operations of palm oil producers associated with over 57% of the burnt land, with an average $ 33.7 million (€ 27.8 million) spent per hectare.

In terms of investments, Norway ranks among the Top Five countries with the largest amounts. As of 2020, investors’ holdings worth $ 84 million (€ 69 million) were still found in palm oil groups with around 46% of the total area of fires. The Top Ten investors (mostly from the UK and the Netherlands) hold almost 70% of all shares and bonds value, with an average sum per hectare of $ 5,791 (€ 4,786 million), 9 times higher than the average of all other institutions.

Such correlations do not mean that creditors and investors purposely supported law-breaking, nor that the palm oil producers which received their money are necessarily the perpetrators of all fires or that the latter always results in deforestation. “Concession companies, largely owned by palm oil producers, are legally accountable for all fires occurring in their properties, including, in some cases, those originated outside of the estate boundaries” Edwin Keizer, research coordinator at Greenpeace Southeast Asia, clarifies. “Besides the use of fire for land clearing by companies, fires are also the result of land conflicts between neighbouring rural communities and the companies.”

Recent changes in the Indonesian national law have watered down companies’ liability, making it much harder for investigators to assign responsibility for fires inside and outside the concessions. Although banned by the government, fire is a cheap land management tool frequently used not only to get rid of wood residue from clearance, but also grass and scrub which hamper plantation management and harvesting. “Fires can cause serious degradation with irreversible impacts to peatlands and forest loss”, Keizer says, also impacting the lives of local communities and the agroecosystems they depend upon for their livelihoods, “The expansion of oil palm plantation in intact forest landscapes contributes to higher temperatures and drier conditions which are likely to increase tree mortality and boost forest flammability”.

Despite the complex reality on the ground, it is undeniable that a large volume of corporate finance and private savings from Europe has ended up in unchecked activities which have an unlawful and destructive impact. The comments we received from financial institutions suggest that, in the absence of legally binding environmental due diligence requirements, they flexibly rely on self-made or independent voluntary guidelines. Such standards are not stringent enough to divert finance from palm oil producers connected to environment-unfriendly concessions.

As of 2019, credit to palm oil groups with fires in their concessions has apparently declined. But a few banks of them continued to hold shares or bonds in those groups on behalf of their clients. “As per our Forestry & Agribusiness Policy, we do not enter into business relationships with palm oil producers that are not committing to become members of the Roundtable on Sustainable Palm Oil (RSPO) and are not working towards the corresponding certification”, reads an email we received from Credit Suisse which is linked to the second largest area of fires among all investors. In fact, all palm oil producers linked to fires and funded by the Swiss bank are affiliated to the RSPO. This organization, albeit having set a no-deforestation target for 2020, manifestly does not yet guarantee 100% burn-free palm oil production. “As for share or bond holdings where our clients are the beneficial owners, Credit Suisse is not in a position to influence the investment decisions unless they are prohibited or restricted by applicable laws”, explains Yannick Orto, the bank’s media relations officer.

All banks which responded to our enquiries claimed that, when acting as asset managers, they are not responsible for their clients' investment decisions. They refused to comment on their past direct involvement through credit.

“If a bank offers a loan to a company which saw fires in its concessions the previous year, then, even though it does not finance the burning, it is carrying out poor due diligence since it is giving more money to a company that performed badly”, argues Merel van der Mark, Coordinator of the Forests and Finance Coalition. “Moreover, whether they make funding decisions independently (through credit) or based on their clients’ desires (through investments), banks are ultimately the ones that make the money available and therefore are responsible for these decisions.”

Financial institutions other than banks gave us no answers, with a couple of exceptions. In 2020 the British insurance company Aviva invested in the palm oil producer Astra International (belonging to the Jardine Matheson Group). This company, which is active in palm oil production through its subsidiary Astra Agro Lestari, has attracted a higher number of European creditors and investors than any other palm oil producer. “We do actively assess all of our holdings on ESG (Environmental, Social and Governance) standards and Astra has an MSCI ESG ‘A’ rating”, says its spokesperson, Steve Ainger. However, according to Astra International’s ESG profile by the rating company Refinitiv (competitor of MSCI), its latest available Environmental Pillar Score (2019) is in fact very low, equating to a ‘D’ (the ‘A’, instead, only refers to the Controversy score, indicating that there is no public campaign against the company). Astra Agro Lestari, although directly associated with fires, has a better environmental score.

“We are progressively integrating ESG factors into the assessment of shares and bonds”, echoed Matteo Tagliaferri, director of marketing and communications at the Italian asset management firm Anima, which is also involved in Astra International. “For this purpose, we use a rating based on the scores assigned by third-party companies”.

Ward Warmerdam, Senior Researcher at Profundo, an independent research organization specializing ins sustainability, says: “when deciding to be involved in environmentally risky activities, such as palm oil, financiers strike a balance between the returns promised by the high productivity of specific groups, which may be propelled by unsustainable corporate practices such as the use of fire, and the potential ESG-related reputational setbacks which may lead such groups to lose their customers and market value”.

Our analysis shows that the same palm oil groups have received funding over and over again. Moreover, there is still financial data from 2020 that will be updated in the coming months. Potentially, additional deals for 2019 (also for palm oil groups with fires) will be uncovered as these may have been disclosed later in 2020, when research by Forests and Finance Coalition has been already completed.