Do EU green investments in Hungary go where they are the most needed?

Climate change will heavily affect the economy of some Hungarian regions, but they receive a relatively low share of EU funding meant for green projects, sustainability and environmental protection. 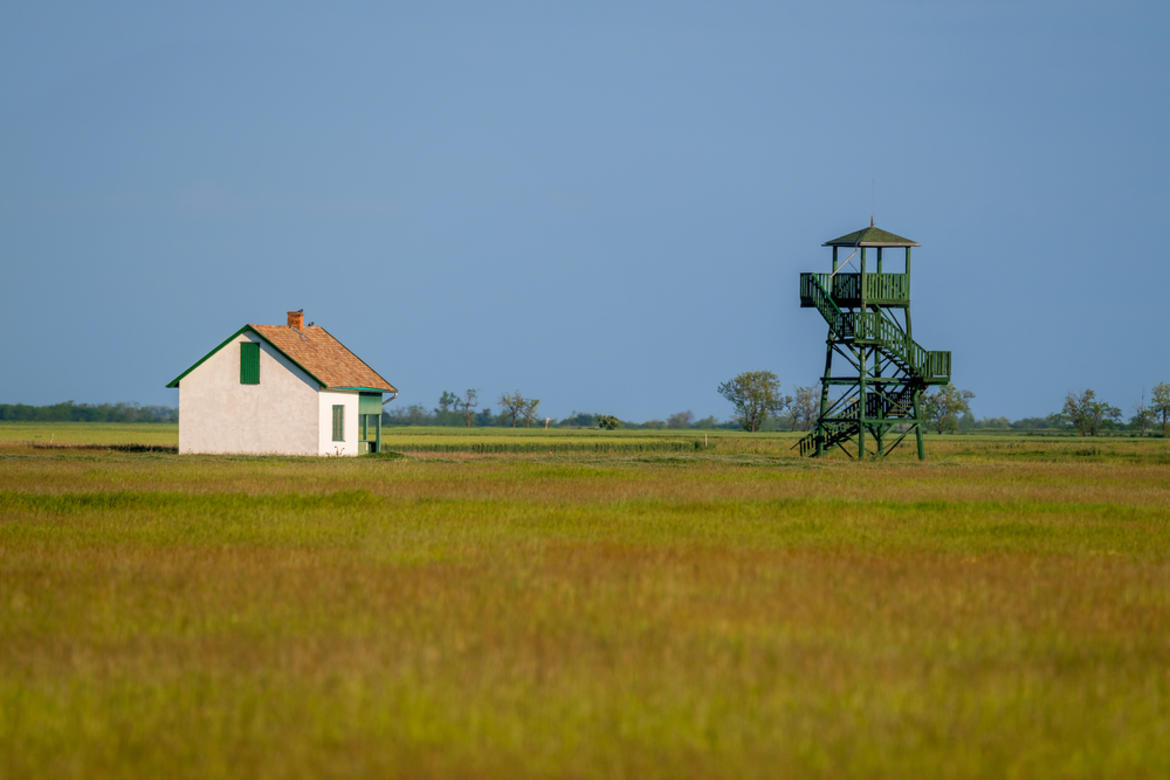 In Hungary, in some areas, climate change can cause significant economic harm. Still, the endangered areas did not receive more resources from the EU funds distributed as part of the Széchenyi2020 development project. There are counties, where the labour market is excessively sensitive to climate change, and even a 0.5°C rise in temperatures can cause over a 10% decrease in employment, even in a good economic situation. This could only be prevented by many well targeted environmentally conscious projects being conducted in these areas. The distribution of EU funding for green projects does not seem to reflect these goals, neither in the number of projects nor their usefulness. Therefore, many Hungarians living in economically vulnerable areas can face exceeding difficulties if they will not start to receive proportional help soon.

NATéR , a Hungarian social and environmental database and research project, was developed via EU funding. The system aims to project and predict environmental and socioeconomic data and combine them to study the social consequences of climate change. Experts looked at variables such as the share of agriculture, mobile labour force, demographic data and industrial structure. The scientists behind the project used multiple regression analysis to identify areas that are socioeconomically vulnerable to increases in temperature and therefore made a forecast about which areas will experience more significant labour market harms due to climate change.

The difference between areas appears to be stark. The project puts areas in five categories, from having very low vulnerability to very high vulnerability to temperature increases. To illustrate, a very highly vulnerable region will predictably experience employment growth 2.78% lower than average in the case of every 0.1°C temperature increase. Thus, 0.5°C warming would make employment growth 15% lower than the national average, likely putting the indicator into a negative spectrum, leading to significantly increasing unemployment.

Four counties almost exclusively consist of very highly vulnerable areas, namely Hajdú-Bihar, Csongrád-Csanád, Békés and Bács-Kiskun. We are essentially talking about closed agrarian communities with little mobility and a labour force skill set largely tailored towards agriculture. Thus, it is of crucial importance for these areas to keep already existing businesses afloat, and open up possibilities for expansion and investment in rural communities. 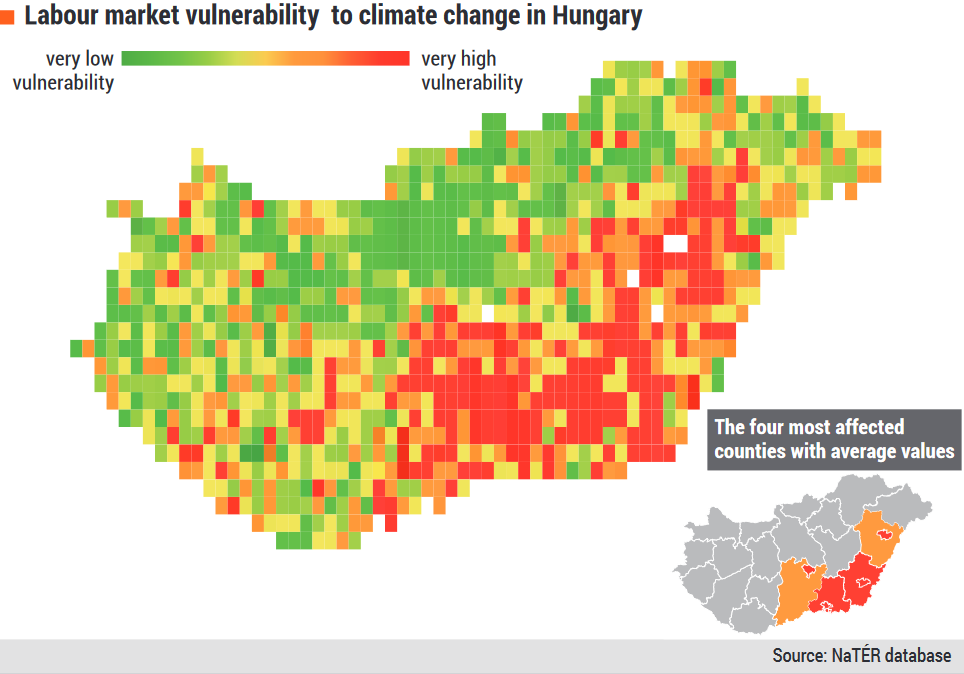 Therefore, it is important to look at green projects conducted in these areas from two directions. Firstly, it would be logical for these counties to receive a significantly higher proportion of green funding to be able to prepare for the structural changes caused by climate change and decrease their vulnerability. For example, green energy projects can make businesses in these vulnerable, often closed and agrarian communities less volatile to increasing energy prices and higher heating and cooling costs due to climate change. Similarly, green infrastructure and aquacultural investments can help preserve the quality of land in the area, maintaining more people working in agriculture, which often tends to be the only viable career for the residents.

While investing as much in these areas as possible certainly seems useful, other than the quantity of the programs, quality also matters. This means that there are certain types of green projects, such as the green energy development of churches or stadiums, or the sustainable development of transportation in cities that do not particularly address the most pressing dangers of climate change to the vulnerable communities. Thus, having many projects in itself is not enough if they are mismatched with the local demands.

After looking at the winning green tenders under the Széchenyi2020 project, we can observe that there aren’t more winning projects in the vulnerable counties than anywhere else in the country, and the situation is concerning in Békés, where there were remarkably few winners.

We analyzed 49 tenders within the Széchenyi2020 program with clear environmental and sustainability purposes. We looked at the percentage of winning projects taking place in the four vulnerable counties. In most cases, the number of winning projects in a vulnerable county is below 5% of all winning projects in the country. Thus, the number of winners in these places is below the national average. Indeed, if we distributed projects evenly in the 19 counties of Hungary and Budapest, we would see each vulnerable county receiving 5% of all projects, 20% in total. In addition to this, obviously, these counties should have successful projects above this ratio due to being outstandingly in need of them. Yet, in the 49 tenders examined there were 19 cases where there were no winners at all from any of the four counties mentioned.

In total, the situation is not incredibly concerning. On average 21.6% of winning projects went to applicants in these counties. While this is not as high as the vulnerability of these counties would suggest, it is at least not outstandingly low compared to other parts of Hungary. But if we break statistics down to counties, we can see a very diverse picture. The situation is the best in Hajdú-Bihar, on average 8.4% of winning projects take place there. This ratio is the worst in Békés, with 2.6%.

In the case of Békés, in 30 tenders out of 49, there were no winners in the county.  There were 11 cases, where Békés had more than 5% of national winners on a tender, but even the best proportion of this was 13.8%. This was on a program supporting environmentally friendly aquaculture, on this tender 4 out of the 29 national winners were based in Békés. Therefore, we can state that there are very few green projects taking place in Békés in national comparison as part of the Széchenyi2020 plan. This can increase the climate vulnerability and economic risks of the area even further, leading to a concerning situation.

A look at different programs

If we look into the types of tenders on which Hajdú-Bihar, Bács-Kiskun, Békés and Csongrád counties were successful, we can observe that the ratio in which vulnerable counties can successfully apply to a tender largely depends on its topic. In addition, some types of projects are simply more useful for addressing the economic dangers of climate change than others.

The industrial development tenders financing renewable energy transition of buildings under the GINOP subprogram produced very good numbers in terms of the area distribution of winning projects. The GINOP tenders offered support options and combined loan constructions in different amounts, therefore there were fitting options for smaller and larger businesses as well. In the four sustainability-related GINOP programs, vulnerable counties received 26-42.5% of all winning projects, which is an outstandingly good ratio. In addition, the sustainable energy-based developments of companies directly correspond to the additional costs caused by climate change. Therefore, renewable energy developments seem like a good idea that can support the protection of jobs in the long run. Nonetheless, there were only four of these sustainability projects under GINOP, which seems far too low considering the success of the project and plausibly more demand for it.

In terms of taking the vulnerability of locations into account, the VEKOP program is far from ideal. Out of the 6 green tenders under VEKOP there were none with vulnerable areas winning. The reason for this is the location criteria of the tender. VEKOP aims to support the competitiveness of the Middle-Hungary region. The question still arises whether this region with a very low environmental vulnerability is the right place for the sustainability infrastructure investments included in the program.

Another interesting type of tenders is the KÖHOP group. Here, there was only one green tender with one winner. The winner is the National Development Ministry, which won 2 billion forints (5.4 million euros) for developing two operative programs, one on environmental protection, and one on the development of transport.

The largest number of green tenders were offered under the KEHOP program, but both the number of projects won by vulnerable counties and their arguable usefulness varied significantly. There was for example a tender for sustainable energy developments of nationally owned stadiums. While on this particular tender there were winners from vulnerable counties, as out of the 20 projects nationwide one happened in Hajdú-Bihar and one in Bács-Kiskun, it is strongly questionable whether these projects will help these counties prepare for economic difficulties. The previously mentioned Békés, which had a very low success rate on tenders, won relatively a lot on a tender supporting the sustainable energy development of churches. This also seems to have limited usefulness when battling the economic harms of climate change.

Two vulnerable counties, Csongrád-Csanád and Hajdú-Bihar were homes of two, outstandingly expensive green transport projects. It is at least questionable whether spending such significant amounts of money on just two projects was the right choice, especially in areas where resources are highly needed at several places. In Csongrád-Csanád, a tram-train was built between Szeged and Hódemezővásárhely, that became infamous in Hungary, often being accused of being an overly expensive prestige project. The tram-train was the winner of two separate IKOP projects within the Széchenyi2020 framework. First, it won 1.25 billion forints (3.38 million euros) for preparations for the project, then 3.5 billion forints (9.45 million euros) to build up its vehicle park. Besides the multiple accounts of criticism, the tram-train received about it being much slower than promised and mistakes being experienced just days after it started to operate, it is principally problematic to spend so much on a transport opportunity between two cities in an area that suffers heavily from the lack of mobility in dominantly agrarian villages.

There is a similar concern regarding the transport centre of Debrecen in Hajdú-Bihar, which was a winner of 21 billion forints (56.75 million euros) on an IKOP green tender, back in 2016. Here, differently from the tram-train, we can’t have complaints about the construction of the project, considering it has not been constructed at all. We know that the plans for the intermodal transport centre cost the city 750-800 million forints (2-2.15 million euros), which it paid to a company called National Infrastructure Development ltd., and funded entirely out of EU resources. After all, these incredibly expensive plans were discarded, and the mayor asked the city council to pay for the creation of a “simplified” version, also by the same company. This happened in 2020, and there has been no transport centre built since then.  A public tender was created for the “simplified” plans in April of 2022, more than three years after the expected finish of the project. In conclusion, there are two significant issues regarding this project. The first one is that while the centre may make the transport of the city of Debrecen more practical, it is unlikely to help to solve the climate vulnerability of the larger area. The second problem is that it hasn’t been built. Therefore any positive impact, the project might have been delayed, and we will probably need to wait for them for a few more years. Meanwhile, the clock of climate change is ticking, and each year missed in development continues to increase the vulnerability of the area.