Due to COVID-19, the economic losses of the European Cultural and Creative Industry (CCI) businesses will add up to billions of Euros. The EU stepped in with a top-up of its flagship Creative Europe programme. But pumping more money into the system won’t do. In many EU countries, the crisis has highlighted structural inequalities within the sector. And workers have started to mobilise. 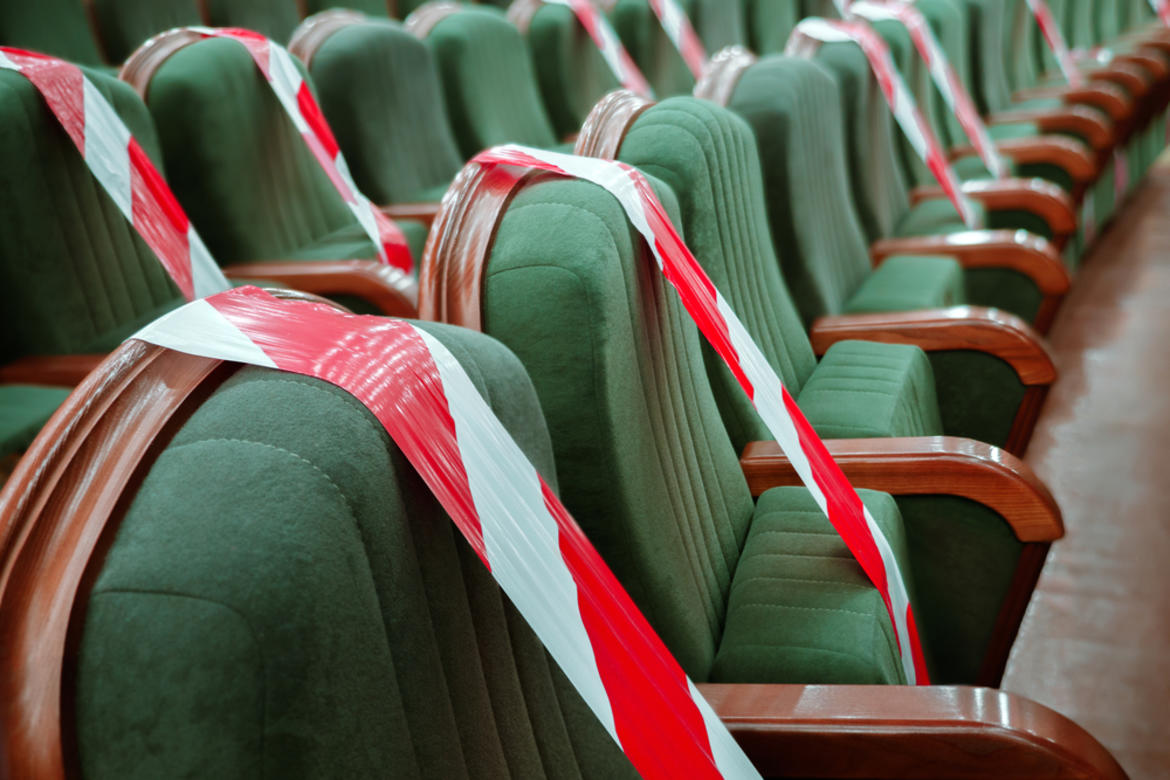 COVID-19 is changing the European Cultural and Creative Industry (CCI) for good. This is how a 27-page long report released by Ernst & Young (EY) in January 2021 and commissioned by the European Grouping of Societies of Authors and Composers (GESAC) could be summed up in a concise way. The report depicts both the traits of the European CCI as well as the overall impact of COVID-19 on the former. So, what is the CCI actually?

It is an economics sector and category that pools together the following industries: visual arts, music, audiovisuals, performing arts, advertising, architecture, books, newspapers and magazines, the video games industry and radio. There are a few basic facts that might have gone unreported over the past few years, namely: the CCI accounts for a staggering 4.4 percent of the European economy when the added economic value is measured as a share of overall GDP. Figure 1 shows the absolute values in billions of Euros for different sectors of the European economy.

It is somehow astonishing to notice that the CCI has a bigger impact on our economy, compared to sectors relative to agriculture, forestry and fisheries, textiles, leather and clothing, telecommunications, aerospace, chemicals, oil and gas extraction, high-tech goods, pharmaceuticals and high-tech goods. According to EY, in 2019, the core activities of the cultural and creative sectors employed 7.6 million people in the EU. Between 2013 and 2019, the workforce in the CCI increased at a growth rate of 1.9 percent, which was higher than the average 1.3 percent rate holding for the overall economy. As figure 2 shows, at the end of 2019, the CCI employed more people than the automotive industry or the chemical industry.

Within the CCI, as few as four sectors provide employment for more than one million people, namely: visual arts, music, audiovisual and performing arts. The latter account for almost 70 percent of the total of 7.6 million mentioned above (see figure 2). On top of the value the CCI represents internally to the European economy in terms of added value and employment-potential, one has to add the contribution of CCI to Europe’s soft power across the world.

However, COVID-19 has been nothing short of a disaster for the CCI. According to EY’s analysis, in 2020 the total turnover generated by the sector will fall from 643 to 444 billion Euros, that is by more than 30 percent. Figure 3 shows - based on EY’s estimates - the fall of the CCI compared to other sectors of the European economy. With a foreseen loss of 31 percent relative to its 2019 turnover, the CCI sector is one of the most hit by COVID-19 in Europe. Only the air transport sector is preceding the CCI in this grim ranking (-31 percent). Yet, CCI could suffer more than tourism (-27 percent) and the automotive industry (-25 percent). It is important to underline the relationship between culture and tourism: according to the European Commission, cultural tourism accounts for 40 percent of tourism in the EU.

Thanks to the estimations by EY, it is possible to understand which sectors, within the CCI, bare the brunt of the fallout, namely: the music industry and performing arts. Figure 4 below breaks down the estimated fall of the overall CCI sector by different economic sectors. Amidst the generalised downfall, it is interesting to see how the video-game industry appears to continue to grow in turnover, a fact which might be directly linked to the home-based fruition of the goods of the industry.

“The situation for theatres, and the performing arts more generally, is disastrous”, claims Heidi Wiley, Executive Director of the European Theatre Convention (ETC), a network of European public theatres founded in 1988 to promote contemporary drama theatre, to support the mobility of artists and to develop artistic exchange throughout Europe and beyond. The ETC is the largest network of public theatres in Europe. It has 44 European Members from over 25 countries. “Within culture, the performing arts specifically witnessed the greatest decline in turnover”, Wiley recalls, and specifies that “there are severe impacts for individuals working in theatre. Theatres in many countries are closed, with their staff on furlough”.

Wiley’s words are echoed across the Old Continent. Over the past months, the European press was flooded with op-eds authored by employees of the sector. In Southern European Cyprus, Vasos Argyridis, the director of the Limassol’s Pattihio theatre, published an open letter laying bare how culture and artistic work is being downgraded everywhere in Europe as a result of COVID-19.

Yet, the impact on the sector goes beyond the closure of venues. Also in the scenario of a fast reopening, challenges lie ahead. “With so many theatres closed, there is a ‘production jam’ effect in which shows scheduled for Spring 2020 and Winter 2020/2021 have been postponed after they were produced. When theatres are open again, there will be reduced audience capacities and less space in the programmes for anything ‘new’ or ‘untested’. This means that there will be fewer opportunities for the next generation of artists looking to develop. The standstill of theatre activity does not only mean financial hardship, but also threatens the foundations of a healthy theatre scene - with a thriving new generation of artists, and a diverse range of staff, performances and actors”.

The already mentioned EY report signals how creative jobs tend to be held by younger and higher-educated people than the average. More specifically, the report reads “in 2019, 43% of jobs in CCIs were held by people under the age of 39 in the EU-27, compared with 41% in the EU-27 economy. The creative workforce is younger than the overall workforce in 21 of the 27 Member States”. Although the ‘production jam’ has parallels with other industries, such as fashion, Wiley argues that the impacts for theatres reach deeper. “Actors must remain ready to perform, at short notice, should theatres open again. Many of our member theatres have therefore continued to perform to empty auditoriums, simply to keep the level of the performance high”.

According to the data points estimated by EY, the music industry appears to be the second sector most hit within the CCI. In March 2021, the International Federation of Musicians, an organisation that represents professional musicians in 65 countries around the world and in every member state of the EU published a report that outlines the impact of COVID-19 on the sector as well as governments’ responses across the globe. According to the General Secretary of FIM, Benoît Machuel the COVID-19 crisis has been “the worst ever” in recent times. His analysis is echoed by reports in The Guardian according to which the UK music industry could halve in size in 2020. Similarly, Finnish media Yle wrote that the country’s music industry expects to shrink by 75 percent in 2020.

However, according to some, COVID-19 came in as the latest of a number of critical developments in the industry. When it comes to the live music sector, over the past years, “in many European countries governments have decided to reduce the public contribution to culture”, Machuel says. This is particularly significant, as, differently than in the US and in Canada, the European cultural sector has always been mainly publicly funded. “In Italy, for instance, it has been really difficult over the past fifteen years, because the money injected in the system has been gradually reduced”. Instead, “when it comes to the recording industry, one must ask the question of who is making money? Well, it’s the pipelines - the telecom companies, the device manufacturers - and the phonographic industry - those who produce the recordings and sell the rights to the distributors”. On top of this, music is ever more distributed online through streaming platforms. The problem with that is that “these distribution systems rely on exclusive rights”, which means the artists authorise the use of the recordings. “The moment you sign the contract with a record producer, these rights are transferred to the producer against either a lump sum - that’s generally the case for non-featured performers, who don’t have their name on the front cover - or royalties - which is the case for featured artists”.

Crucially, during the COVID-19 crisis, as live shows were shut, all musicians have been receiving income through these channels. “This adds up to almost nothing. So now we really realise that the money that is left to performers from the use of their recordings online is negligible. And this is a huge fight we need to take on”, adds Machuel. Similar views have been publicly shared by Nadine Shah, a Mercury-prize nominated songwriter, in The Guardian. Shah recalls how #BrokenRecord and #FixStreaming have become reference hashtags in the Twitter-debate on the (un)fairness of streaming platforms’ business models at the times of COVID-19.

As a matter of fact, it is somehow a paradox that a crisis like the one of COVID-19, during which people have been chilling out at home listening to streaming music, the creative minds behind those tracks are among those impacted the most. “It is the right moment to understand the imbalance of the system”, Machuel says. “We need the support of the general public. Everyone loves music. If you stopped all music all of a sudden, people would go crazy. People take for granted the music that comes out of their phone when they tap on it. Sometimes, they don’t realise the amount of work, of talent it requires to create this. And when they pay for this, people don’t understand that the money doesn’t go to the artist, or very little of it goes to it”.