Public enterprises will have to open up their data

New European legislation will significantly increase the accessibility of data produced with public finances: therefore, data produced by public enterprises, i.e. companies which provide essential services such as public transport to many cities. 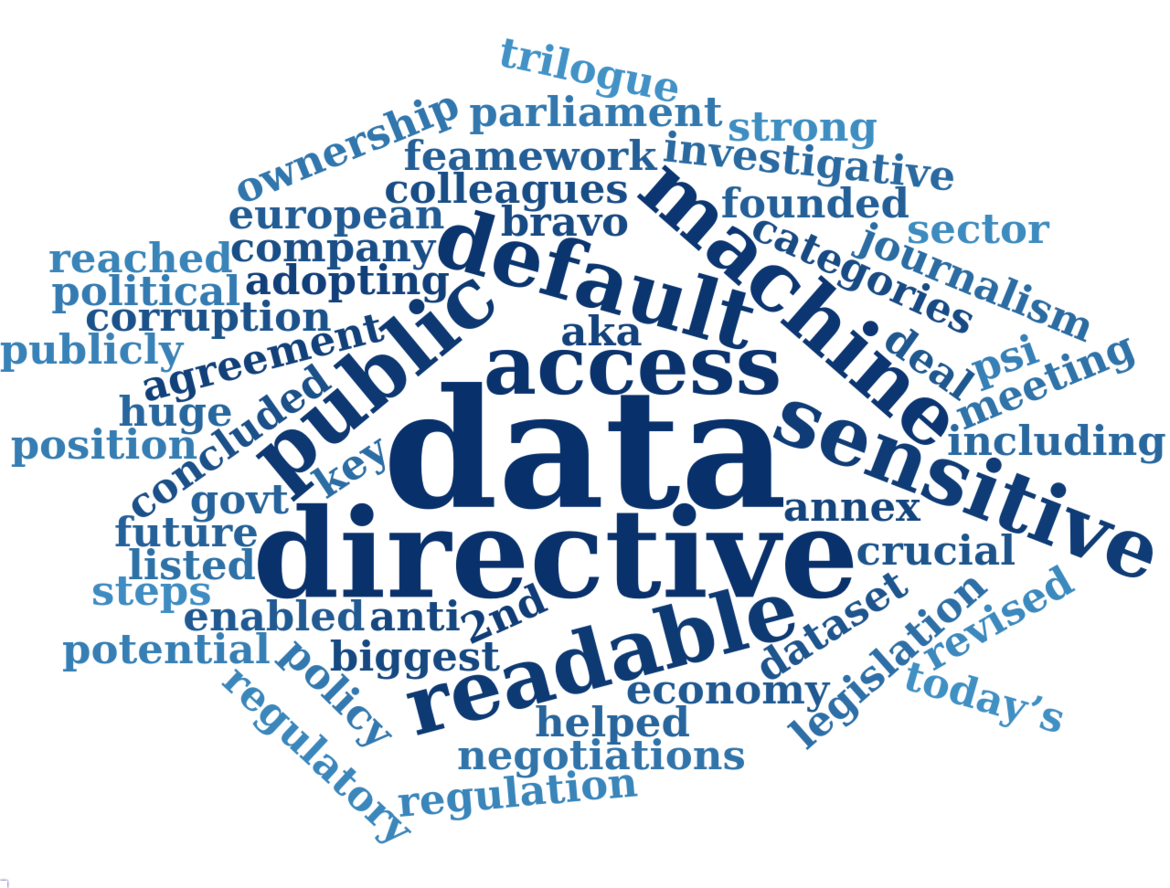 This article utilises the research and analysis capabilities provided by EDJNet’s Quote Finder tool, which allows users to track the Twitter activity – tweets, hashtags – of every MEP.

There’s good news on the open data front. The European Union is taking further steps in opening up public data, with an aim to facilitate access for citizens. But the most interesting aspect is how this will also affect data produced by state-owned enterprises, and more generally, data produced with public finances.

Last week an agreement was reached between the European Parliament and the EU Council, which should soon lead to the definitive adoption of revisions to the European legislation on the re-use of public sector information.

The announcement can be traced back to a tweet by MEP Julia Reda, who welcomed the agreement and stressed the benefits for investigative journalists and the fight against corruption.

Political agreement reached on the #OpenData aka #PublicSectorInfo directive! High value dataset categories including company ownership listed in annex, which will be crucial for investigative journalism & anti-corruption. Thanks to all colleagues who helped make this deal! pic.twitter.com/dTknBYjsel

The agreement revises the already existing directive, expanding the possibilities of reusing public data, making it possible to access information on companies which manage essential public services, such as transport, for example

The economic prospects are also interesting. New opportunities to reuse data will “significantly contribute to the competitiveness of the European data economy and spur the development and uptake of advanced technologies such as artificial intelligence, cloud computing and many others”, reads the press release for the agreement.

Worth noting is the fact that this data is expected to be “machine readable”, rather than only available in impractical formats. And while Julia Reda’s tweet highlights increased control over a world which is for now rather obscure (state-owned enterprises), MEP Michal Boni stresses the potential for businesses:

Today’s key meeting /2nd trilogue on #opendata and #PSI could open up much more access to public data in #EU. Huge potential here for the future of economy.
New #PSI regulation means all non-sensitive govt data now needs to be open and machine-readable by default @ViolaRoberto pic.twitter.com/ptgwsGnbBO

The term “high-value datasets” is no accident, from the socio-economic point of view. On the basis of agreements reached thus far, this data should be made available to all member states and accessible through APIs, free or at low cost. It is therefore acknowledged that governments can potentially generate revenue by making data available for payment. For now, marginal costs are expected, in specific cases: this is a detail which will be worth paying attention to, especially for those turning data into information.

“Small firms and startups can’t always afford to buy public sector data, so increased availability and lower costs can help enable ground-breaking innovation from which we all stand to benefit”, declared the Austrian minister for economic and digital affairs, Margarete Schrambök, during preparatory work on the agreement.

Increased availability of public sector data would also mean the ability to access a much broader range of information relevant to the public – and make much more data available to platforms such as the European Data Portal and the EU Open Data Portal.

For the moment, those services are perhaps still not very accessible to those without expertise. While “data literacy” is very welcome indeed, we also need to highlight the work of dissemination. “Open” doesn’t just mean “made available”: it also implies a genuine ability to understand the the information contained in the published datasets.

One example of work in this direction is EDJNet’s Data Search Engine, designed to facilitate research into datasets by journalists and citizens. The tool allows, for example, the use of search filters to restrict results based on themes, categories, countries or desired formats.

The European effort to open up public data also falls under the “digital single market” initiative, which funds the development of the “Digital Europe” program dealing with related issues, such as online transactions and digital commerce platforms, the “free flow” of non-personal data between member states, specific regulations for the .eu domain, and the protection of personal data.