Polls from across the EU show increasing support for the parties in the the christian democrat EPP, the Greens/EFA, and the social democratic S&D groups of the European Parliament in the past two months. In Austria greens are down by 1.2 points. 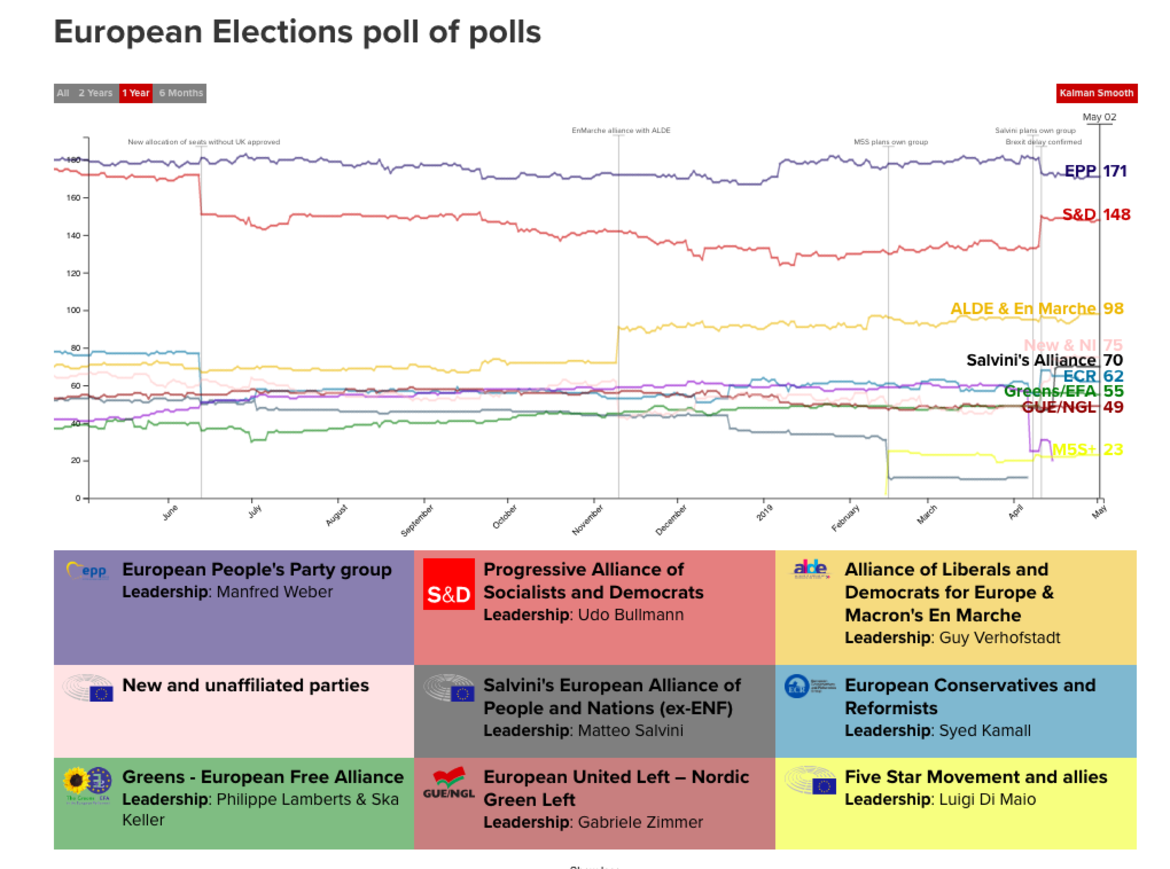 This analysis is based on 269 polls conducted between March 1 and April 30, 2019. The polls have been gathered and aggregated by POLITICO. More about the methodology below.

European People's Party (EPP) is the group that seems to be making the largest gain. It is up by 0.7 points to 21.0 percent. Here are some of the national parties belonging to EPP that are particularly gaining ground:

Greens-European Free Alliance (Greens/EFA) and Progressive Alliance of Socialists and Democrats (S&D;) are also up in the latest polls by 0.4 and 0.3 points.

The EP group with the biggest decrease across the continent is the liberal ALDE, down by 0.4 points. These are the national parties of ALDE that have made the largest losses:

POLLING SUPPORT FOR EU PARLIAMENT GROUPS AT THE END OF APRIL

Theses numbers are based on the weighted average of the polling support for each parliament group in each member state. The countries are weighted by their seat share in the new parliament. The mapping of national parties to EP groups is done by POLITICO.

One of the big trends we expect to see in the 2019 elections is the rise of populist, nationalist and eurosceptic parties. The newly established European Alliance of Peoples and Nations, led by Matteo Salvini, and the conservative and eurosceptic ECR currently poll at 17.6 percent.

As the composition of parliament groups have changed since the previous election polling levels are not fully comparable to the results from 2014.

The vote shares for the 2014 EU Parliament election have to be taken with a grain of salt. They are computed as a weighted mean of the vote shares of each parliament group in every country. Each country is weighted according to the number of seats in the parliament. In some cases the elected members of a coalition of parties are split into multiple EP groups. In Ireland for example the Independents joined three different parliament groups. In those rare cases we assume each parliament group to have received a third of the votes, as the official results don't include a detailed breakdown.

The numbers don't add up to 100 percent as the votes of non elected parties are not presente.