EU calls for the release of Ukrainian director Oleg Sentsov

The Sakharov Prize for human rights and freedom of thought is being awarded in Strasbourg, but the 2018 winner cannot receive it because he is imprisoned in Russia. Several MEPs participated in the Twitter campaign for his release. All the tweets and hashtags used by MEPs can be traced using EDJNet's Quote Finder tool. 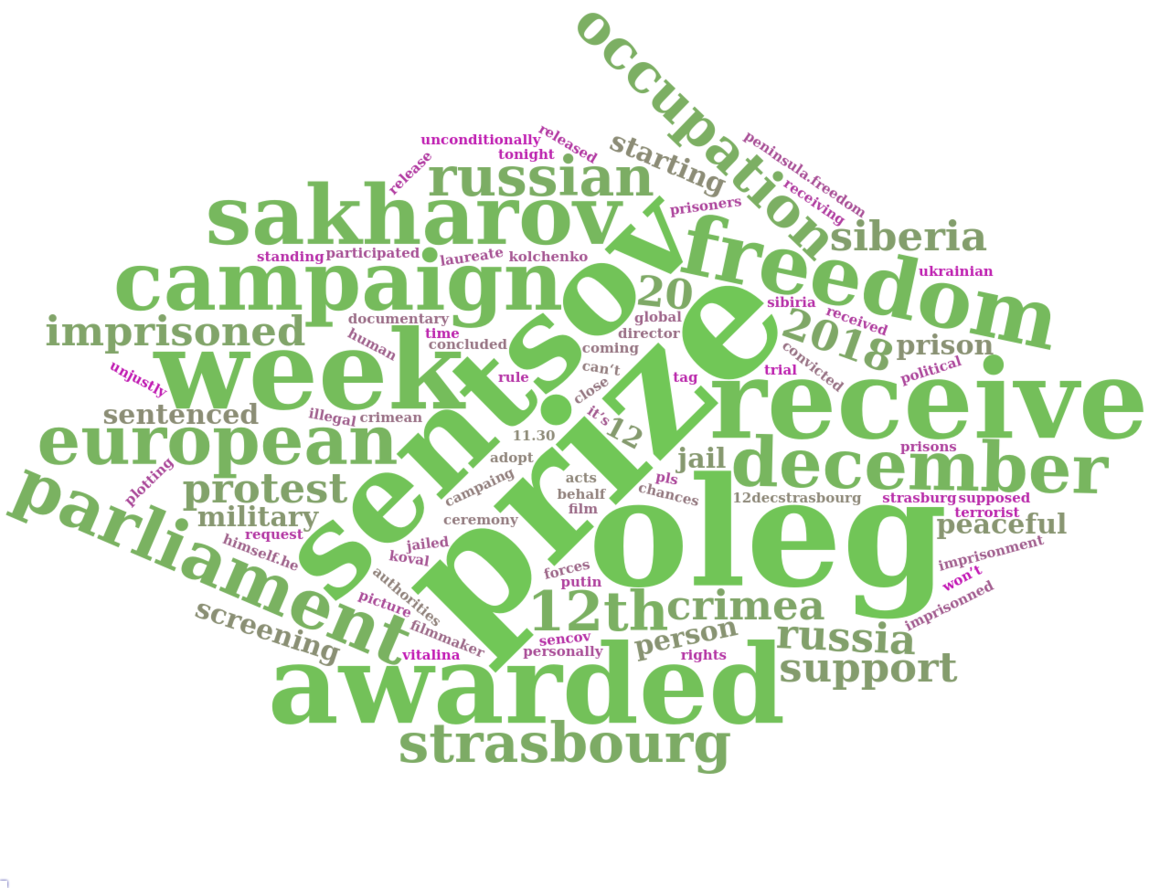 This article is based on information gathered by EDJNet's Quote Finder, a tool that we developed in order to easily monitor and browse the tweets published by all the members of the European Parliament, spotting trending keywords, influential actors, and more. The tool is freely available to everyone.

On December 12, the European Parliament is to present the Sakharov Prize for Freedom of Thought, awarded this year to Oleg Sentsov, a Ukrainian film director detained in Russia. Several MEPs were photographed with the inscription "Let Sentsov Get Sakharov", launching the campaign on Twitter with the same hashtag: in the last month #LetSentsovGetSakharov was tweeted 44 times to ask for his release and his participation in the award ceremony. The more general hashtags #SakharovPrice and #OlegSentsov are also popular among MEPs.

Born in 1976, Oleg Sentsov studied economics in Kiev, then film directing and writing in Moscow, and made his directorial debut in 2012 with the film Gámer. A human rights activist, Sentsov was arrested in 2014 following the organisation of humanitarian missions in support of the Ukrainian military and the active role he played in the protests against the Russian occupation of Eastern Ukraine. He was charged of terrorism and deported to Russia, where he was imposed Russian citizenship.

"Detained in Siberia for having peacefully demonstrated for freedom and against the military occupation of the Crimea: Time has come to set him free", has tweeted S&D MEP Teresa Griffin:

Next week Oleg Sentsov will be awarded the @Europarl_EN’s #SakharovPrize for Freedom of Thought but he is imprisoned in Siberia for peaceful protest for freedom and against military occupation of Crimea; it’s time to let him go! #LetSentsovGetSakharov pic.twitter.com/lQNpWqrf6Q

Vice-President Heidi Hautala (Greens-EFA) called for the immediate release of Sentsov by the Russian authorities:

Just after the screening of a documentary about Sentsov, MEP Eduard Kukan (EPP) invited people to join the campaign for his release:

Just concluded the screening of #TheTrial - documentary by #AskoldKurov - in @Europarl_EN on behalf of @EPPGroup . Thank you to those who participated in person and if you would like to support #OlegSentsov, the 2018 Sakharov Prize laureate, then please #LetSentsovGetSakharov pic.twitter.com/kU11td0pki

The Sakharov Prize for Freedom of Thought was established in 1988 by the European Parliament, and every year the prize is awarded to personalities or groups of any nationality who have spent their time defending human rights. The first to receive this award was Nelson Mandela, together with the Russian dissident Anatoly Marchenko. Among the groups awarded are the Argentine mothers of Plaza de mayo in 1992, Journalists without Borders in 2015, and the Venezuelan opposition in 2017. In 2013 the prize was awarded to the young Pakistani girl Malala Yousafzai.