Mapping the migrant camps in Europe

Successful integration of refugees and migrants into their host society is at the core of the European migration strategy - at least, on paper. In reality their current living conditions show that they are far from meeting this objective. MIIR’s analysis on the refugee issue in Europe seeks to answer the question: "What are Europe’s plans for the refugees?” 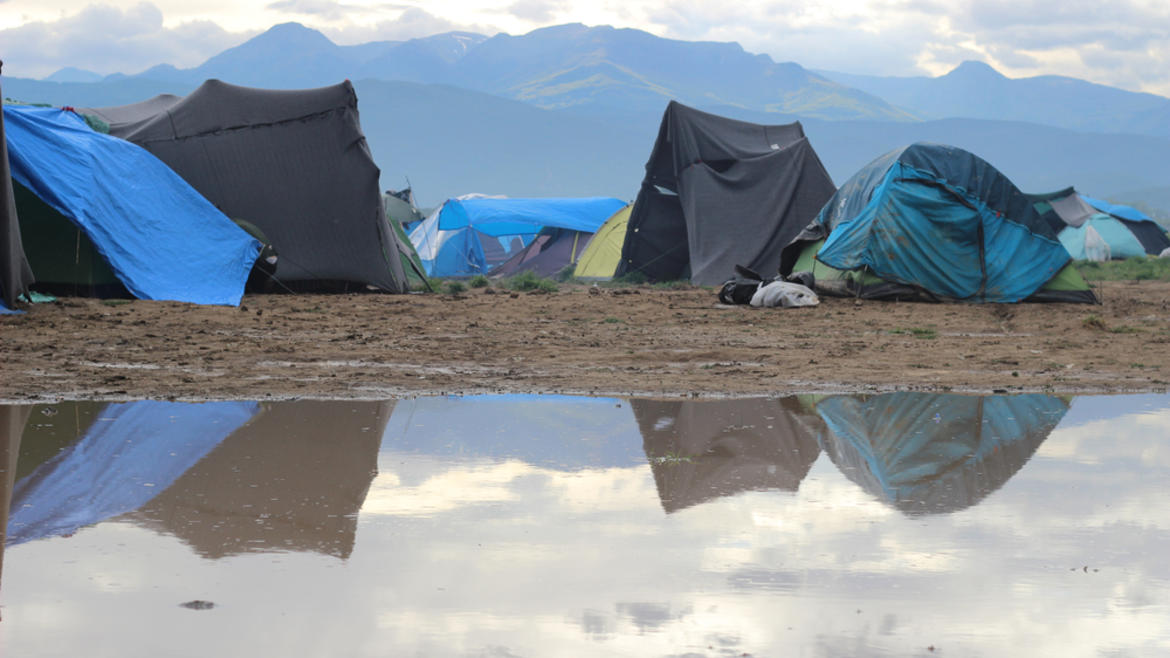 Parwana Amiri, a 17-year old girl from Afghanistan, went to school in mid-April for the first time since she fled her home country. The last time she was in school was 2 years ago - a long time for someone her age, but not long enough for her to forget what she had to go through. On her Facebook page, she wrote: "(I remember) my last day at school in Afghanistan. I didn’t even have the chance to say goodbye to my classmates. We had to cross the desert and travel by sea. The last time I saw a school building was in Turkey, but I never went inside.”

Parwana is one of the thousands of children in Europe who are deprived of access to education because they live in refugee camps. This is not coincidental: 6 years after the surge of refugees arriving in Europe, refugee camps are hindering rather than facilitating social integration. "They shouldn’t be punished, especially the children, because they fled from a war" a spokesperson for Doctors Without Borders in Lesbos told MIIR a few days after the devastating fires at the Moria camp that occurred last September. The Ombudsman's report, published in March , confirms the huge shortcomings of the educational integration of children living in Reception and Identification Centres (RRCs) in Greece. This was largely due to the management and organisation of the camps and how they are cut off from society.

A monotonous life at camp

"Girls and boys slug down alcohol to drown their sorrows. Many have become alcoholics. Life in the camp is the same every single day," Parwana tells MIIR, upon describing her life at the Ritsona Refugee camp. However, her camp seems to be more bearable than the other accommodation facilities – the Kara Tepe camp in Lesbos, which was hastily erected in September to replace Moria, is one of them.

Moria was Europe's largest camp, housing thousands of people and known worldwide for its squalid living conditions. It was intended for only 3,000 people, but it eventually housed 20,000 persons. In the days leading to the devastating fire, a total of 13,000 people lived near the olive trees around the main part of the camp which residents referred to as a "jungle". In the aftermath of the disaster, a medical practitioner from Doctors Without Borders shared his experiences with MIIR: “Many children contemplated suicide to end their misery. In all my years as a doctor, I have never witnessed this kind of situation anywhere else.”

The new camp in Kara Tepe, despite some improvements done in recent months, seems to be following in the footsteps of Moria . Hence, they named it "Moria 2.0.” On 21 February, a pregnant woman set fire to her tent in an attempt to burn herself alive. According to UNHCR's assessment , it was the result of considerable distress after receiving news that her request to be relocated to another camp was denied. A month ago, reports of lead contamination in the site led to yet another outcry against the government from organisations working there. Only temporary solutions were provided. The Greek saying "Nothing is more permanent than the temporary" seems oddly suitable to describe how the refugee issue is managed in Greece.

In Europe, the camps did not start popping up during the migration crisis of 2015-2016. The Lampedusa camp in Italy (where there is still a hotspot operating), the “jungle” in Calais and the Grand-Synthe camp in Dunkirk (now defunct) were all notorious for their appalling conditions and dangerous environment. The responsible authorities’ lack of action and poor organisation of the refugee and migrant population are sadly very common.

Mapping the camps that currently exist in Europe and studying data on their housing capacity compared to the actual number of residents, how long they’ve been there and their living conditions, can help us evaluate if the European policies on migration were implemented as well as how the resources were used.

Relevant information such as asylum procedures, migration flows, arrivals, nationalities, and so on, is mainly found in the monthly reports of international organisations such as the UNHCR and the International Organisation for Migration (IOM). In Europe, however, that kind of information is not readily available. MIIR contacted the European Commission's press office responsible for EU policy on migration issues (which is the DG Home, or the Commission’s Directorate-general for Migration and Home affairs) to request for the list of camps in the European Union, especially those that are funded or co-funded by the EU. We were informed that no such information was available and were urged to contact the relevant ministry of each Member State.

In Greece, the Ministry of Migration and Asylum has only published very general information, limited to the names and location of the camps1 in the country. However, we managed to obtain information on the NGO-operated camps and detention centres. Like pieces of a puzzle, we were finally able to put together the bits and pieces of information collected from different sources. The information on the number and location of refugee camps in Greece, Cyprus and Italy has helped us come up with a comprehensive mapping of the camps across Europe.

The Greek camps: some information

According to the latest available data from the Greek Ministry of Immigration and Asylum, there are 32 refugee accommodation facilities and 6 Reception and Identification Centres (RICs) operating in Greece.

Data obtained by MIIR show that by February 2021, a total of 13,590 people were staying in the country's accommodation centres, 5 of which were located on the East Aegean islands. However, the refugees and migrant population living on the Greek islands is larger, with several hundreds more living in other types of lodging not directly under the ministry's jurisdiction, such as the Kara Tepe refugee camp in Lesbos.

The evacuation of the Kara Tepe camp started on Saturday 24 April . Fifty-four out of 600 residents belonging to vulnerable groups were transferred to the neighbouring camp. Their relocation was indicative of the Greek authorities' intention to create a single large structure on the Lesbos island. At the end of March, in Mytilene, the European Commissioner for Home Affairs, Ilva Johansson, announced the allocation of 276 million euros for the creation of new migrant camps on the islands. The NGO’s considered the evacuation as a setback due to the deplorable conditions of the camp. "This is cruel and absurd. Instead of moving people to safety, Europe and Greece are doing the exact opposite," denounced Doctors Without Borders in a recent post on Twitter.

Today, it is estimated that around 14,100 refugees and asylum seekers remain on the islands; 74% of them live in RICs . This marks a 26% decrease since December 2020, which is in line with the government’s repetitive announcements to decongest the islands. According to a UNHCR report, there were 19,100 people on the islands that month, and 100,600 refugees and migrants on the mainland amounting to a total population of 119,700 people.

As the responsibility of managing the refugee crisis is not equally distributed among the Member States since the implementation of the Euro-Turkish agreement in March 2016, the total refugee population in Greece has been increasing since 2017. According MIIR’s sources, the total adult population at the beginning of February in the 6 RICs in Greece amounts to 7,215 men and 2,986 women (plus 2 adults whose gender was not declared) while the total child population consists of 1,556 girls and 1,823 boys (plus 8 children whose gender was not declared).

In addition to the camps directly under the supervision of the Ministry of Migration, accommodation is also provided by the NGOs (more than 160 according to the data received by MIIR). Some of the asylum seekers stay in apartments through the ESTIA programme. This programme for the whole period of 2021 has a budget of more than €91 million which is entirely financed by the Asylum, Migration and Integration Fund. Finally, part of the migrant population is detained in closed Pre-Departure Detention Centres (PROKEKA) which were built to evaluate people to be deported. According to our data, the total number of detainees in the 8 PROKEKAs in Greece is 2,252 as of 11 February 2021.

Southern Member States: the case of Cyprus and Italy

Cyprus has 2 camps , one of them is the Kofinou Reception Centre created in 2004 with an initial capacity of 400 persons. This and the Kokkinotrimithia Temporary Accommodation Centre are the 2 accommodation centres for persons seeking asylum or in need of international protection.

In Italy, the Italian Ministry of the Interior reports of four hotspots (Lampedusa, Pozzallo, Messina and Taranto) that serve as registration centres. The main places for accommodating a large number of refugees are the 9 Centri di Prima Accoglienza (CPA) located in Bari, Brindisi, Capo Rizzuto Island, Grandisca d'Isonzo, Udine, Manfredonia, Caltanissetta, Messina and Treviso. There are also temporary reception centres (CAS) managed by the regional administration. By June 2020, there were 5,000 such structures with a total capacity of 80,000 people. Finally, people whose request for international protection was rejected and therefore have to be repatriated are sent to residential centres called the Centri di Permanenza per il Rimpatrio (CPR). By July 2020 there were 9 such centres in Italy.

In the same year, the UNHCR reports a total of more than 95,000 people flocked to southern Europe by land and sea. There were at least 1,646 people who were reported dead or missing. The influx to Greece from the sea alone was 9,700 people, significantly less than that of Spain, which had almost 41,900.

1. For convenience, we often used the term “camp” in our reports to refer to the Temporary Accommodation Facilities (there are 32 of these facilities in Greece, based on the information given by the Ministry of Migration) or Reception and Identification Centres (RICs). A common feature is the makeshift accommodation provided: refugees were either lodged in tents or containers. In Italy, the centres carrying out the identification process are referred to as hotspots.