On May 18 Matteo Salvini gathered far-right leaders in Milan for a rally before the European elections. Polls suggest that his alliance of popoulists may be a threat to the next EU parliament. 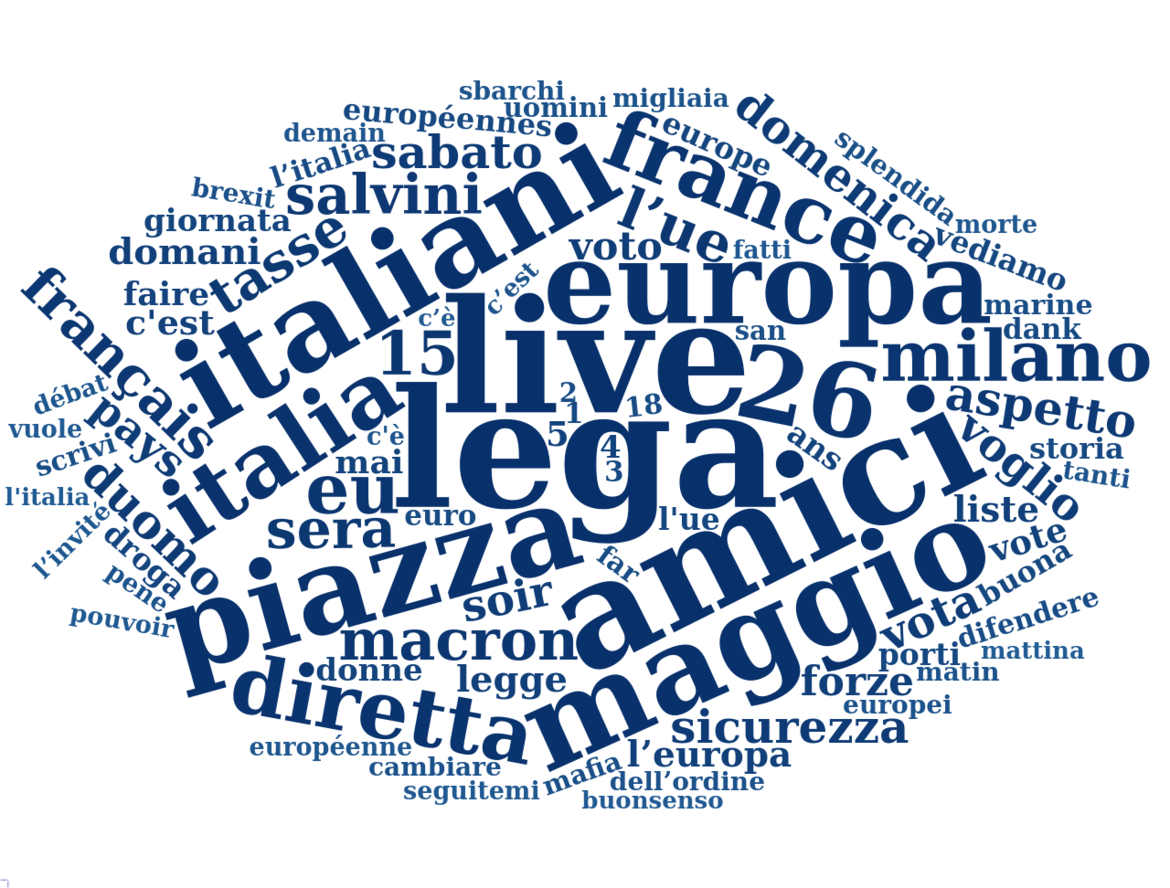 This word cloud shows the frequency of terms used in tweets by MEPs member of the ENF. The Quote Finder   tool allows for customized analysis and the tracking of other relevant information.

On May 18, European far-right populists gathered in Milan for the big event organized by Lega’s leader Matteo Salvini. Among the participants, the leaders of 11 parties across the European Union. Besides Matteo Salvini, the event was attended by big names in the far-right political landscape, such as Marine Le Pen of France's National Rally (welcomed as a star by the crowd), Geert Wilders of the Dutch Party for Freedom, Jörg Meuthen of Alternative for Germany. Other delegations came from Bulgaria, Czechia, Slovakia, Belgium, Denmark, Estonia, Finland and Austria.

The big absent was Heinz Christian Strache, former vice-chancellor of Austria and leader of the Freedom Party, engulfed by the scandal of ties with Russia, for which he may face criminal prosecution and that made Austrian Chancellor Sebastian Kurtz call for snap elections.

Among the various statements made during the event, the most significant ones were the ones made by Salvini, who challenged German Chancellor Angela Merkel and French President Emmanuel Macron confronting their idea of Europe, depicted as elitist, against his alliance’s one, that according to him, is fighting for hope.

Marine Le Pen, whose party could come out first in France in the upcoming European elections, made a long speech stressing on the freedom and independence of nations within a different European project.

Matteo Salvini is the leader of the new family ready to settle in the European Parliament, the European Alliance of People and Nations, commonly referred as Salvini’s alliance. This new EU group will rise from the ashes of the dissolved ENF. According to the polls, Salvini’s alliance is set to become the third or fourth force in the next European Parliament, with roughly 75 MEPs.

You can change Europe´s destiny and say « no » to this technocratic EU that despises peoples: on May 26th, vote for a Europe of sovereign nations! pic.twitter.com/lr5iZreRWZ

Given the uncertainty that characterizes the ongoing European elections, some suggests that this group might challenge the liberals guided by Guy Verhofstadt and possibly reinforced by Emmanuel Macron’s project, Renaissance, for the achievement of being the third most numerous group in the next European Parliament.

This challenge for the third place directly concerns the two ideas of Europe that seem to be facing each other in the ongoing elections. In a tweet, ALDE leader Verhofstadt called for a debate between Salvini and himself, seriously accusing Salvini’s alliance of collusion with Russia and of illicit financing for their campaigns.

Dear @matteosalvinimi,
You & your friends Strache, Le Pen, Orban & Farage are plotting with & paid by Putin to destroy. I challenge you to a 1 vs 1 debate. People have the right to know what devil's plan you have in mind. Let me know where, I'll be there! #SalvinivsVerhofstadt pic.twitter.com/fmV3Z4WckT