Yemen is our disaster

By providing weapons to parties in conflict in Yemen, Europeans have a responsibility in the war that has claimed more than 10,000 lives in four years. In this sense, it is also our disaster, explains H-alter. 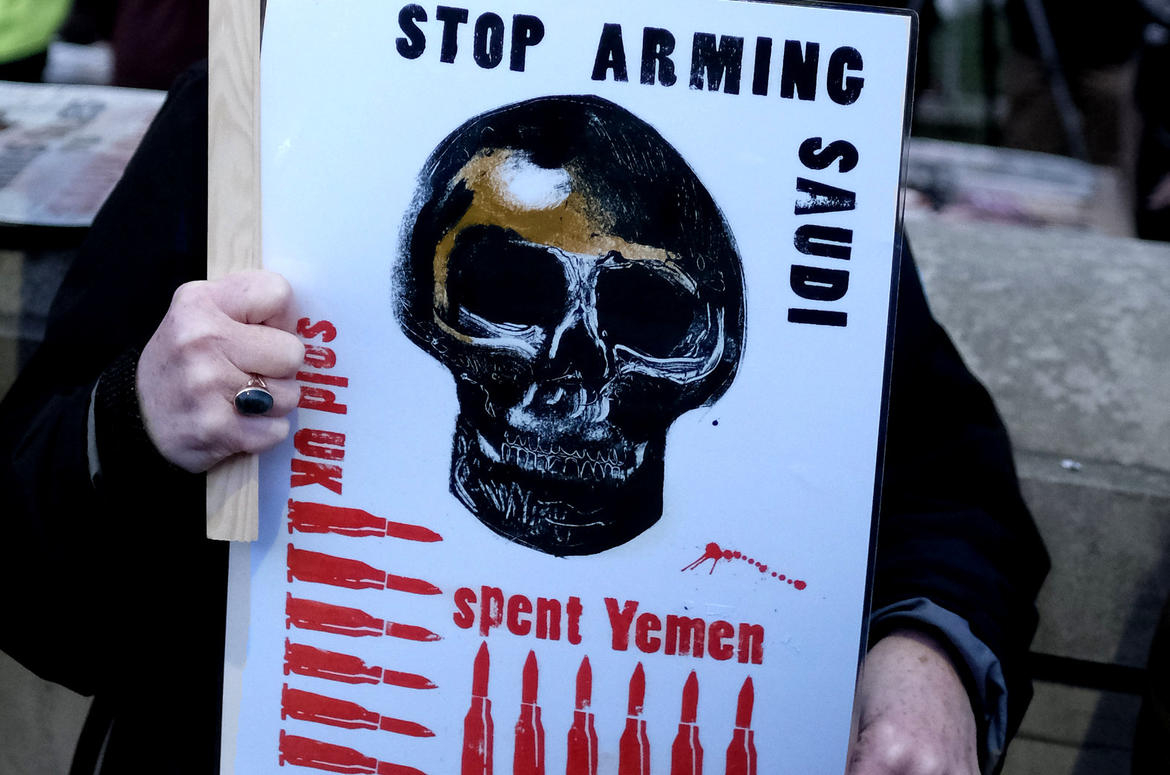 The United Nations High Commissioner for Refugees (UNHCR) recently reported that every week nearly a hundred civilians were killed or injured in Yemen during 2018. A total of 410 deaths and 542 injuries were recorded last year and five of the victims were children. On the other hand, the Yemen Data Project says that there have been 19,652 air raids since 2015, resulting in the suffering of 18,035 civilians, 8,419 of whom were killed.

It should be emphasized that these are quite conservative estimates and the real civilian casualties are probably much more. Thousands of people are displaced due to the battle, and millions suffer from lack of food and inadequate medical care.

Specifically, fourteen million people are on the verge of malnutrition, and late last year, UNICEF Director for Middle East and North Africa, Geert Cappelaere, warned that about seven million children go to bed hungry every night. It is also important to note that humanitarian workers are often detained, tortured and killed while providing assistance throughout the country.

None of the wounded parties has conducted plausible investigations into numerous violations of the law of war by military forces. There is also an ongoing lack of adequate international response to crimes in Yemen. In spite of all the existing technology and availability of information, the war in Yemen has been going on for years, no one protests, and the enormous figures resulting from the consequences of the ongoing destruction are consumed by media as a package of a “humanitarian disaster” negative, which does not correspond with the story of political responsibility.

By reading media reports about Yemen, I have the impression that the disaster swooped down to the earth from the heavens, against which nothing can be done, which is happening by itself, and has not been created and guided by someone.   It is difficult to think differently about war and warfare if we do not perceive our own involvement and our own responsibility as we have done so far, and we do not embrace the power to do something different.

By writing this, we would like to remind you of the responsibility - of Europe and Croatia in the war in Yemen. Perhaps such recognition could result in some kind of resistance, even if it was modest, symbolic. Yemen, in that sense, is no one’s but our catastrophe.

Croatian politicians, female and male alike, have not been asked about the ethical implications of arms trade with countries involved in wars in the Middle East, systematically ignoring or violating international law.

Croatia has traditionally exported most of its weapons to the United States, but in 2016, another large importer of Croatian weapons emerged immediately after the United States, where weapons worth more than EUR 110 million were exported. This year, Croatia exported armaments and military equipment (so-called supplies from the Homeland War) to Saudi Arabia, which is worth as much as 78.5 million Euros. As the export of weapons to Saudi Arabia generally began to be more problematic, journalists have started looking into official EU documents, especially those concerning the export of weapons and other military equipment. Croatia is ranked at the very top of the EU countries according to export of weapons and other military equipment, at least as far as the cost of licenses is concerned. The "Golden Years" were in 2013 and 2015 when this cost was among the highest in the EU countries, alongside the UK, France, Germany and Italy. The Croatian exports, according to the available documents, more precisely in accordance with the Common Military List of Commodities of the European Union , refer to weapons with a smooth calibre of less than 20 mm calibre and larger, other armaments and automatic weapons of 12.7 mm and larger calibre; ammunition and devices for fuse setting; bombs, torpedoes, rockets, missiles, other explosive devices and charges, and related equipment and accessories, especially designed for military use, and especially designed components of armour or protective equipment and structures and components used to produce component making equipment.

A common practice followed by Saudi Arabia is to sell field combatants "non-standard" weapons (old Soviet weapons) instead of their own weapons. Saudi Arabia, therefore, exports its weapons to other countries in its surroundings, which are mostly purchased in countries of the (South) Eastern Europe, and Croatia is among those countries.

In 2017, for a brief period of time, the attention of the Croatian and the wider public was prompted by the publication of BIRN's journalistic research showing that large quantities of weapons have been transported from the Rijeka Airport on the island to the Middle East, which falls into who knows whose hands and in who knows which battlefields. The Pentagon moved the route to Krk Island following the US government's decision to divert the routes away from Germany, as investigations into and prosecution of alleged violations of arms transfer laws from Germany to the Middle East began in Germany. In 2017, Croatia signed 194 arms export contracts with 47 countries, including Jordan, Saudi Arabia and the United Arab Emirates.

Part of those weapons has certainly ended up in Yemen, though it is almost impossible to trace their path. It is also important to point out how the financial value of aid from Europe is directed towards Yemen by comparison with the value of the arms sold by the Saudi Arabia coalition during all these years - only in Britain the licenses for arms exports to Saudi Arabia since 2013 are worth at least 7.25 billion Euros, while the estimated value of exports is not found in official documents. Humanitarian aid was actually providing the band-aid after the thrown grenade.

Even so-called "progressive" governments, such as Spain , did not escape some hypocritical practices. The mayor of Cadiz, José María Gonzalez (Podemos), who was represented as an anti-war activist, publicly advocated for cutting all commercial links with Saudi Arabia in 2015, later "changed his mind” and endorsed a contract with Saudi Arabia, which financed and maintained a military shipyard in Cadiz. Pedro Sanchez also publicly endorsed the deal. And while members of his Socialist Party in the European Parliament voted to reduce all military sales to Saudi Arabia, Sanchez re-approved the sale of laser bombs to Saudi Arabia. The Spanish licenses from 2013 to 2017 are worth EUR 1.64 billion while the estimated value of exports is 1.63 billion.

The “etiquettes” tagged by the Croatian media on the war in Yemen were pretty bad. The war reports on Yemen by the media in Croatia, especially by the mainstream media, were accompanied by the context of reporting, i.e. transmitting agency news about the sufferings, attempts of peace negotiations, humanitarian crises and hunger of the population.

In the context of arms sales, mainstream media wrote much more after the killing of the Saudi journalist Jamal Khashoggi, referring to Amnesty International reports, exclusively on US and British sales, excluding other countries making profits on the "Saudi genocidal campaign", as the journalist of the News Newspaper called the war in Yemen.

Only the news mention other actors, such as Germany and Spain, which despite announcing they would suspend arms trade, both concluded arms sales contracts. In addition, DW also mentions French sales - basically due to its close ties with Saudi Arabia, the leader of the "other side" of the war.

Additionally, also following Khashoggi's killing, Telegram points to Denmark and Finland as other arms exporters on the basis of the Stockholm International Peace Research Institute report.

One article, which is almost identical on several mainstream portals like 24 Hours, is devoted to the sale of weapons to Saudi Arabia, and especially in 2016, when the network of BIRN and OCRCR journalists found that Croatia exported 302 million Euros worth of weapons that ended up in the battlefields in Syria and Yemen. A more detailed text was published by the specialized Obris portal.

On the other hand, the "public service" HRT did not dedicate any article to the sale of weapons by Croatia. In general, reporting on the situation in Yemen has led to statistics on the number of deaths, while a "more extensive" article can be found only after the death of pyrotechnicians from Croatia.

We asked the Centre for Peace Studies for an opinion on the political and media affliction of the war in Yemen. "While European countries are loudly targeting refugees who are trying to reach the European Union, they are quiet when it comes to their responsibility for arms sales to the war-torn countries or to the countries like Saudi Arabia who intervene in Yemen", they tell us from CMS-a.

They recall that Croatia, despite the UN report or the European Parliament's call for arms embargoes on Saudi Arabia because of the war crimes committed by Saudi Arabia's army, has decided to sell arms and ammunition to that country.

"In addition, the Republic of Croatia has violated the International Arms Trade Treaty by selling arms to Saudi Arabia, which requires that before the export, the state must make an assessment of possible misuse of weapons of mass destruction. Namely, two years ago, the Centre for Peace Studies received a response from the Ministry of Economy, Entrepreneurship and Crafts that the Republic of Croatia did not have a document from which it would be clear to estimate the situation of arms exports to Saudi Arabia. Exports of weapons to Saudi Arabia were made without any assessment, in violation of the international conventions as well as domestic legislation. By engaging in such practices, the Republic of Croatia joins countries that are fuelling armed conflicts in the world and contributing to international instability", the CMS-a points out.

Croatia joins the world’s worst-hit list of the worst kind, but the war in Yemen has not become statistically “interesting” to female and male citizens in Croatia.

In some European countries, however, the war in Yemen has managed to raise citizens’ attention, women and men alike. In March, citizens in London protested on selling arms to Saudi Arabia for fuelling war in Yemen. Protesters have stressed that the proposed sale of multiple Eurofighter Typhoon aircraft to Saudi Arabia was illegal under international law, and they also recalled that thousands of civilians were killed in the conflict in Yemen. In neighbouring Bosnia and Herzegovina, several humanitarian aid funding was collected for humanitarian aid purposes, and in Italy, for example, unions recently refused to embark the cargo to the Saudi ship as a protest against the war in Yemen. Harbour workers went on strike, refusing to work until the ship leaves the port in Genoa. The ship was loaded with weapons in Belgium, and before managing to arrive to a port in Italy it was successfully blocked from taking over the additional weapons in French ports – because of similar protests.

In Croatia, for the last four years, no action has been organised - neither the collection of funds for aid nor anti-war meetings, nor any form of protest against the war in Yemen and Croatian participation in it. We did not do anything, but we cannot say any longer that we did not know.