Vox makes Madrid an exception to the European rule

As opposed to their far-right European counterparts, who have grown in villages and small towns, Vox has gained their biggest vote percentage in Madrid and the big cities. 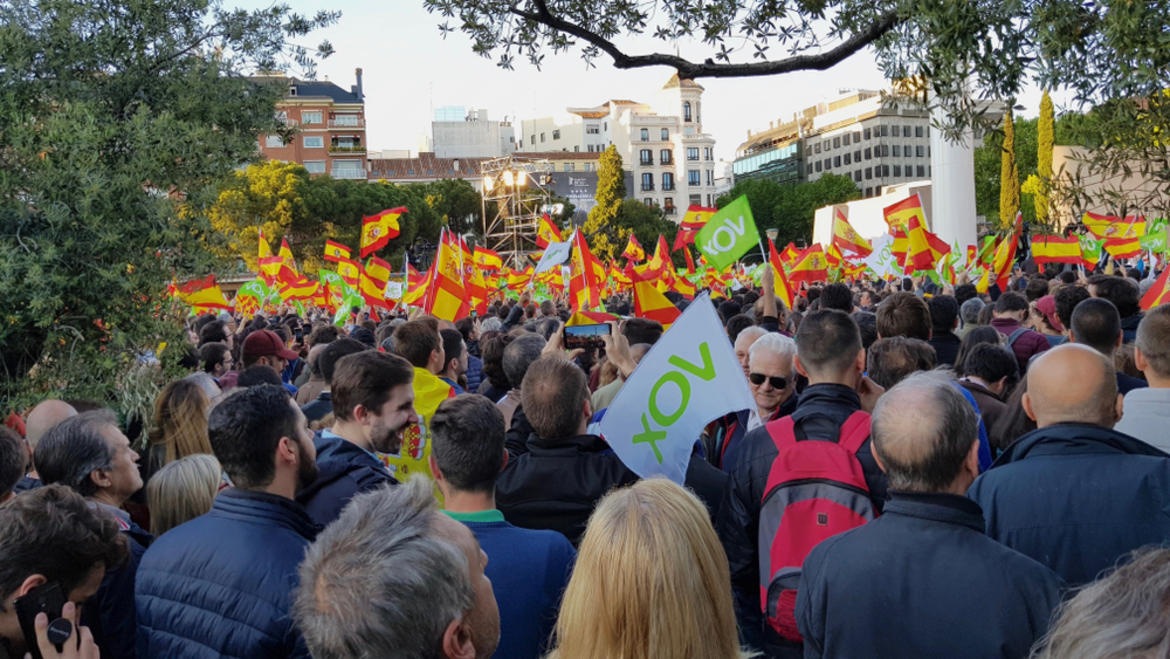 Spain always has to be different. Although the general election on the 28th of April resulted in the “Spanish exception”- one of the few European countries without a far-right party in its parliament- the turnout for Vox has thrown up another peculiarity within the country: of the ten largest capitals in Europe, Madrid is the only one where the far-right has gained a vote share larger than their nationwide average.

Vox achieved 13.86% of the vote in Madrid, while their national average was lower at 10.26% (a 3.6% difference) in the election. The other nine capitals follow an inverse pattern. One of the starkest cases of this disparate voting pattern is in France, where the Front National (now known as Rassemblement National) achieved 21.3% at a national level, while managing only 4.99% in Paris.

What is causing this new “exception”? Political experts attribute it to two factors: the link between Vox’s program and specific characteristics of the electorate in Madrid and also the political idiosyncrasies of the capital.

On the one hand, Santiago Abascal’s party triumphs most in urban areas where it can pick up ex-voters of the Partido Popular (PP) rather than those disenchanted voters who opt to support left-leaning parties. This limits its ability to gain votes in rural areas, unlike its European colleagues. “Vox has more in common with the Front National of Jean-Marie Le Pen than that of Marine Le Pen” explains Pablo Simón, political scientist and lecturer at Carlos III University.

The other determining factor is the larger presence of civil servants and military officers in big cities, especially in Madrid, as well as a larger upper-middle class. Ignacio Molina, a senior researcher at the Elcano Royal Institute, argues that the Spanish electoral system gives rural areas and provinces disproportionate amount of power, influencing the programs of the major parties. Vox’s results in the general election back-up this theory with greater support in large Spanish cities, with the exception of Catalonia and the Basque Country where nationalist groups tend to win.

The far-right in capital cities 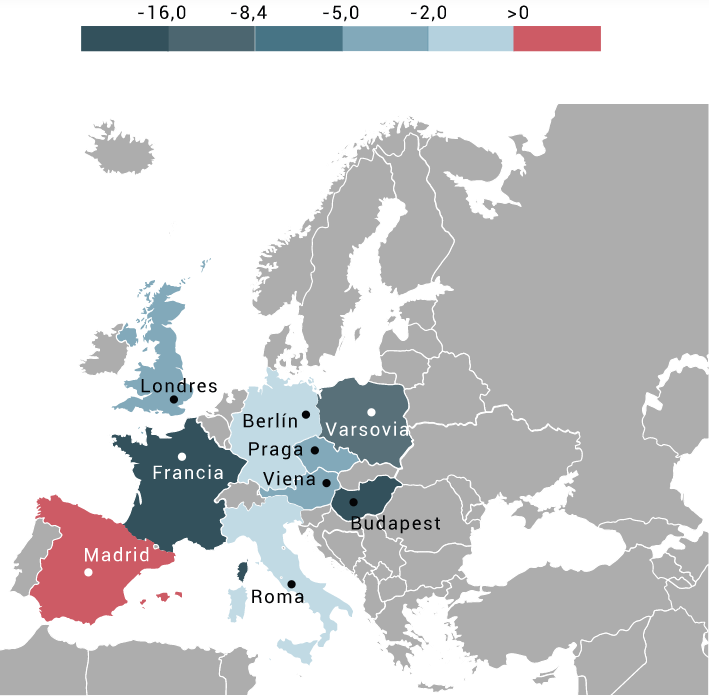 In 2016, the United Kingdom voted in favour of leaving the European Union, which was the main objective of the United Kingdom Independence Party (UKIP). Nigel Farage, their most charismatic leader, left the party. With his departure, UKIP was almost totally wiped out in the 2017 general election. Nevertheless, the UK has followed the disparity in vote share between the rest of the country and London.

In 2015, UKIP gained 12.6% of the vote in the nationwide poll though only received 8.1% in London (4.5% less). Not even Nigel Farage, who has made a comeback with his successful Brexit Party, could win a seat in the House of Commons in 2015, as a result of Britain’s first-past-the-post electoral system.

In Germany, the difference is less stark. While the xenophobic Alternative for Germany (AfD) won 12.6% of the national vote in 2017, it gained 12% in the Berlin (0.6% less). This election result meant that AfD became the first far-right party since the end of the Second World War to take up seats in the Bundestag.

Salvini’s League party, after trouncing its rivals in the European elections in May, is positioning itself as the favourite to win in the next general election, the date of which depends on the stability of their coalition government with the Five Star Movement (M5S). In 2018, the far-right gained 17.35% of the Italian vote, while in Rome they only managed 11.61% (5.74% less) due to their support for Northern independence. This may also have been caused by the presence of another extreme-right party, Fratelli d’Italia, who are strong in the capital.

Fratelli d’Italia gained 4.35% nationally though it received 8.9% in Rome. Adding them both together, therefore, resulted in a smaller result in the capital (20.51%) compared to their joint result of 21.7% nationally (1.9% less).

The party of the Le Pens, now rebranded as Rassemblement National (National Rally), received an impressive vote share in the recent European elections, finishing first in France. In 2017, in national elections, 21.3% of the French population voted for Le Pen, though she lost in the second ballot to Emmanuel Macron.

Nevertheless, they were thrashed in Paris. The National Rally came fifth in the capital with only 4.99% of the vote. This was a 16.31% difference with the national percentage.

In the 2016 elections, the Romanian far-right received a derisory share of the vote. None of the parties achieved more than 3% at national level.

Until a few weeks ago, Sebastian Kurz had been the bright new star of the EPP. The conservative formed a coalition with the far-right FPÖ. Recently, this has all been thrown up in the air due to a corruption scandal involving the FPÖ’s former leader, Heinz-Christian Strache, who resigned as vice-Chancellor. Kurz, leader of the centre-right ÖVP, lost a motion of no-confidence which triggered new elections for September.

In the 2017 legislative elections, the FPÖ gained 26% of the national vote. The story was different in Vienna. The capital is a centre-left stronghold and Strache’s party gained 21.3% (4.7% less).

The ultraconservative Law and Justice Party (PiS), an ally of Vox in the new European Parliament, has made its government a constant thorn in the side of the European Union, who reprimanded Warsaw its for antidemocratic policies.

In 2015, PiS achieved 37.58% of the Polish vote, a landslide in the Sejm (legislative chamber). While the party did well at a national level, it did not play out that way in the capital. In Warsaw, despite enjoying a large amount of support, they did not come first. PiS lost Warsaw by 0.04%, coming second with 29.19% of the vote (8.39% less than the national poll).

If an ultraconservative paradise exists, then it probably looks like Viktor Orbán’s Hungary. Hungarian centre-right and far-right parties enjoyed 68.33% of the vote in 2018. Almost half of the population (49.27%) voted for Viktor Orbán’s ultraconservative Fidesz. The neo-fascist Jobbik party gained nearly one in five votes (19.06%). Nevertheless, despite strong showings in the rest of the country, these parties ran out of steam in Budapest. The characteristic orange of Fidesz covered the map of Hungarian constituencies except for three. In Budapest, however, the opposition finished with a majority of districts. In the capital, Orbán’s party counted 38.15% of the vote to gain the mayoralty. With the votes of Jobbik (12.93%), the far-right therefore amounted to 51.08% (17.25% less).

The Czech far-right won a similar proportion of the vote in the 2017 legislative elections to Vox’s recent showing in Spain. The xenophobic Freedom and Direct Democracy Party (SPD), led by Tomio Okamura, took 10.41% of Czech votes - around the same as the conservative ODS - though only acheived 5.81% in Prague (4.6% less).

At least for the moment, European capitals are resisting their various far-right movements, despite strong showings in some of them. In Madrid, although it is the exception that proves the rule, Vox are still far from having the electoral strength to match Orbán, Salvini or Le Pen.