The 5G networks that are being deployed all around Europe can provide inhabitants of cities with sustainable living, reduced traffic and stringent security, but the technology can also determine a slippery slope towards mass surveillance. 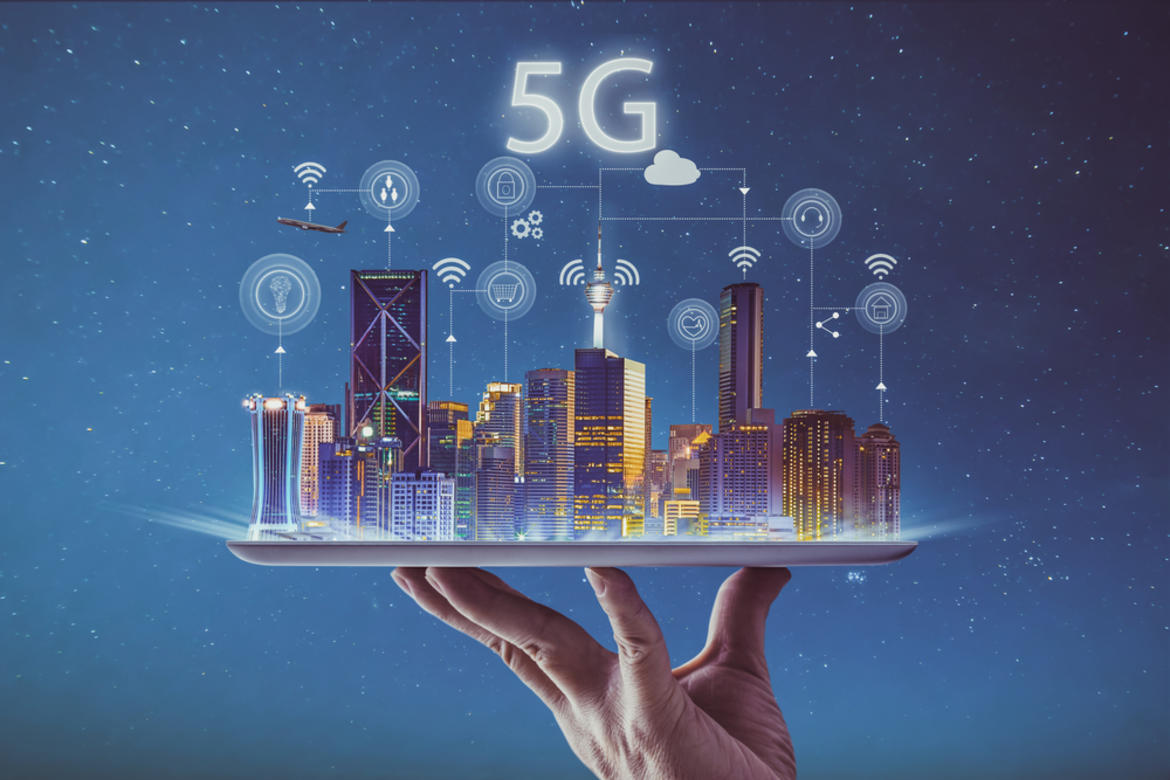 Sustainable living, reduced traffic, faster connectivity, stringent security: among other appealing possibilities, the solutions promised by smart cities have ushered in a wave of optimism and a rush for the widespread implementation of 5G on which they will run. However, while these prospects seem appealing on the surface, the social and political threat that comes hand in hand with the contentious privacy aspect of these smart cities and their infringement on civil liberties cannot be taken lightly.

Indeed, digital solutions could improve some quality-of-life indicators by 10-30 per cent , according to McKinsey. These include areas like the environment where greenhouse gas (GHG) emissions could go down by 10-15 per cent, while crime could be reduced by up to 40 per cent.

Cities are major environmental hazards, consuming 78 per cent of the world’s energy and producing more than 60 per cent of GHGs, a UN Habitat report deemed , and that’s despite them accounting for less than 2 per cent of the Earth’s surface. With two-thirds of the world predicted to be living in urban communities by 2030 , the case for more technological integration to assist with the challenges that this will bring grows stronger.

Thousands of sensors are installed across urban areas, connecting to a common cloud which then translates the data produced by the population to find real-time solutions to its daily running and future growth. In this perspective, smart cities sound an enticing prospect.

However, as big tech companies with questionable track records on data privacy are at the forefront of these dwellings which monitor, store and adapt to every move by citizens, smart cities sit at a contentious border between convenience and liberty.

The Cambridge Analytica scandal that rocked Facebook and the ideological biases of Google made public by former employees-turned-whistleblowers have led to rife debate in North America over the possible need to break up the tech giants due to their encroachment on matters of privacy, speech and democracy.

Waterfront Toronto, a smart city development by Sidewalk Labs, a subsidiary of Google’s parent company Alphabet, has come in for harsh criticism over privacy and data collection, resulting in numerous board members quitting the project. Roger McNamee, an early investor in Google and Facebook, told Toronto officials that the data obtained on users in this Quayside project has the ability “to replace democracy with algorithmic decision making” and “is a dystopian vision that has no place in a democratic society”.

While a great deal of healthy scepticism exists across the pond, the emergence of 5G-led smart cities in Europe comes almost exclusively from China, through mobile commmunications giant Huawei, which is no stranger to similar controversies of its own. While the US is developing 40 smart cities, less than 4 per cent of the global total, China is developing 500 – almost half the worldwide total – illustrating just how far ahead Beijing is in this particular race.

Convenience at the expense of liberty

In July, Huawei’s senior vice-president Catherine Chen announced that the company had secured 50 commercial contracts for 5G, 28 of which are with European contractors which are fundamental to the establishment of smart cities on the continent.

Duisburg in Western Germany, with a population of just under 500,000 people, is the latest city to become 'smart' thanks to a partnership with Huawei which will transform it from a traditional industrial city into a “service-oriented smart city” to assist government, port logistics, education, infrastructure, and homes.

Similar projects are being envisioned across Europe with Huawei dominating the 5G network. In Greece, Huawei began investing in 2005 and now commands a 50 per cent share of the telecoms equipment market. Meanwhile, 15 major cities in Spain, including Madrid, Barcelona, Valencia and Seville will be using Huawei base stations as they transition to ‘smart’.

According to Euractiv , 240 European cities with populations over 100,000 have made some progress towards becoming smart cities.

The likes of Slovakia and Hungary have also declared their intention to have Huawei be their 5G provider after dismissing security fears, yet it is Serbia which offers the starkest look into the intrusive aspect of 5G-driven smart cities superseding its host nation to impose a highly surveilled enclosure with the promise of security and safety.

An unsolved hit-and-run incident that took place in Belgrade became the catalyst for the implementation of Serbia’s high-surveillance system in collaboration with Huawei. With the perpetrator of the said crime caught in China thanks to facial recognition software, the two nations’ already solid relationship grew stronger for the creation of ‘Safe Cities ’.

This agreement ushered in the installation of 1,000 high-definition cameras which use facial and license plate recognition software in 800 locations across Belgrade, yet Serbian law that regulates the area of data protection impact assessment has not yet been applied. And this is precisely why there are such concerns over smart cities, as the companies providing the data essentially run the rule over matters of data protection and privacy, above the laws of the land.

The ties between Huawei and China’s government may expose liberal democracies to cyber-attacks, spying, digital authoritarianism and information warfare via the 5G network and the smart cities which they fuel.

“Due to the development and consequently, complexity of technology, it is unavoidable to create public-private partnerships to keep up with state-of-the-art ideas and systems,” writes Clara Alves Rodrigues’ in her peer-reviewed paper ‘Digital Gangsters - Are Big Tech Giants Challenging Democracy?’ . “Consequently, the government acts more like a broker, buying and organising the services from the private sector. The protection of human rights is therefore left in the hands of who designed the smart city. For example, the right to privacy can only be granted to citizens of Smart Cities if it is incorporated in the technology that governs it, producing privacy by design.”

Yet this is not just hypothetical projection, the outline of what can be achieved is already in practice in China. The ‘re-education’ camps in Xinjiang, China’s Westernmost province, with police checkpoints, facial recognition, biometric registration, GPS tagging, video surveillance, and communications monitoring is a fully-fledged high-tech surveillance state imprisoning some 1.5 million Uyghur Muslims.

That is in addition to China’s social credit system which ranks its citizens’ behaviour and limits access to transport and good jobs among other things to those who fall below the standards. By the end of 2018, 5.5 million high-speed rail trips and 17.5 million flights were denied to prospective travellers who were on a blacklist. In July 2019 alone, China restricted 2.56 million “discredited entities” from purchasing plane tickets, and a further 90,000 from purchasing rail tickets.

Not only is this a threat on the individual level but it makes for a potential geopolitical flashpoint emerging on Europe’s doorstep between the two biggest superpowers.

The Trump administration’s clampdown on Huawei comes as part of a wider trade war between the US and China but also due to concerns about alleged spying carried out by the company and other national security threats. While the US seemed to previously have the backing of its European allies due to the risk of extrajudicial state interventions, the UK, Germany, France and the Netherlands have since backtracked .

In September, however, Poland dealt a blow to Huawei by signing a deal with the US to strengthen cooperation on 5G technology. While there was no direct mention of the Chinese company, the joint declaration implied it by the need for "a careful and complete evaluation of 5G component and software providers”. US vice-president Mike Pence said Poland’s agreement with for 5G would "set a vital example for the rest of Europe".

The 5G race, therefore, and the smart cities that come with it, goes far beyond just a matter of a network provider, but either directly or indirectly it seems to point at a nation’s alignment with either the US or China that will encompass everything from business to daily life in the near future.

By 2024, around 40 per cent of the world’s population and some 22 billion devices, from cars to refrigerators and cell phones to traffic lights will be on the 5G network, and thus will reshape the way we live.

A threat to democracy

The infringement on democracy evidenced by Google through its algorithmic manipulation ahead of the 2016 US presidential elections has provided the warning signs of the capabilities and intentions of big tech when its power grows too great or remains unchallenged.

And so smart cities, where these very companies become far more than just search engines or network providers but the holders of all aspects of one’s personal data and arbitrators of behaviour. A slippery slope is created, where these tech giants can not only help in swaying votes but seek to mould humanity in their desired image.

The problem lies not in the technological possibilities, but in whom is coding these cities and to what end. The desire to solve certain pressing issues of living in cities is justified and smart cities running on 5G technology make an appealing case for it. Yet the rush to jump on the 5G bandwagon is leaving the threats to matters like personal privacy and democracy dangerously underestimated.