No parties, concerts or gatherings. We look at how the pandemic is affecting Spotify

Not everyone is traveling to work these days, many are working from home. We have more time to watch things, to listen and read. Music services should be doing well out of this, but the data suggests just the opposite. 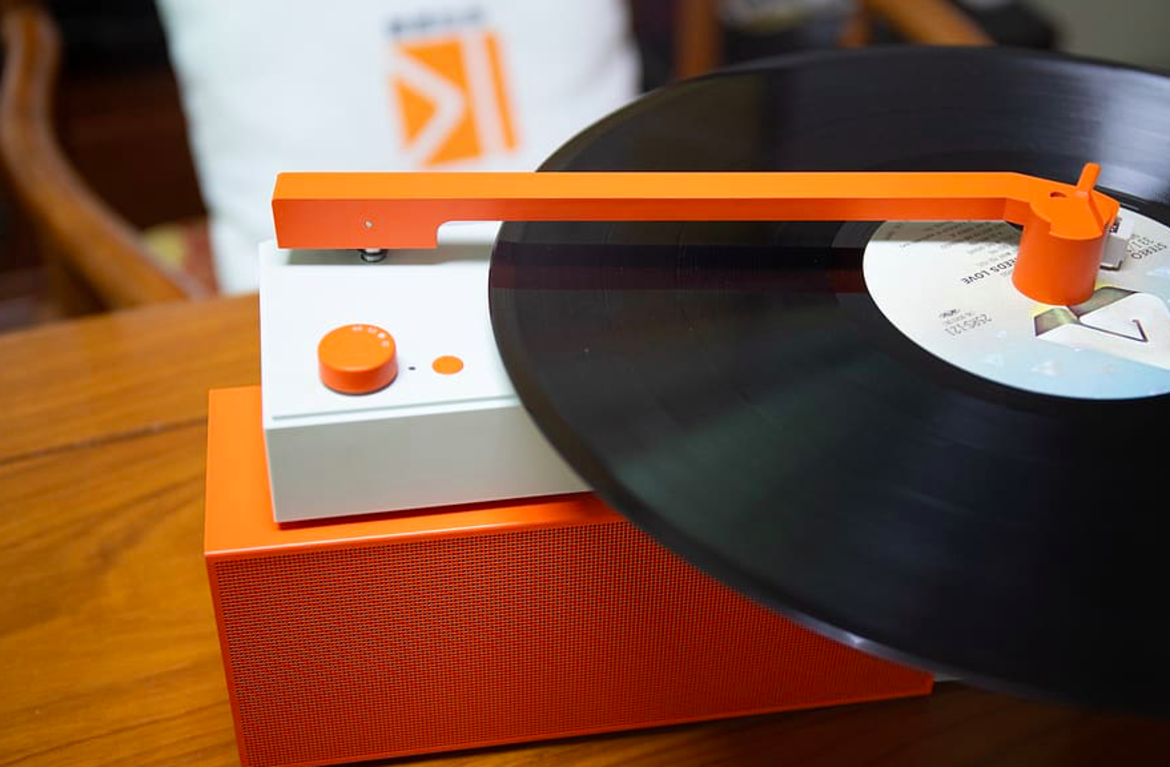 If you type "corona..." into Spotify’s search box, you'll see dozens of playlists created for the quarantine. There are songs on them jokingly referring to the circumstances, such as "In the Air Tonight" (1980), "Isolation" (1980) or "It's the end of the world as we know it". That last track, recorded back in 1987, has perhaps unsurprisingly found itself back in the charts recently .

These songs, however, are not found in the daily list of the 200 most popular songs on Spotify . And the Top 200 is the only data that the streaming giant shares with us. However, they can help us find answers to the question that concerns us.

In a crisis, we seek information

If we take a look at the data from Italy, which has so far suffered the most from the epidemic in Europe. The graph shows the number of song plays on the Top 200 list in Italy from the beginning of February 2019 to 30 March 2020. It clearly shows the number of plays changing regularly. Visible peaks appear every seven days, these are the weekends. Most plays appear on Fridays and Saturdays, when people are most likely to party, while on Sundays there are rapid drops. There are also seasonal fluctuations: in Italy, summer sees a considerable increase in the play count. A sharp increase in the number of plays can also be caused by a showy premiere. In Italy, this happened following the release of an album by the rapper Supreme, which took place on 15 November. 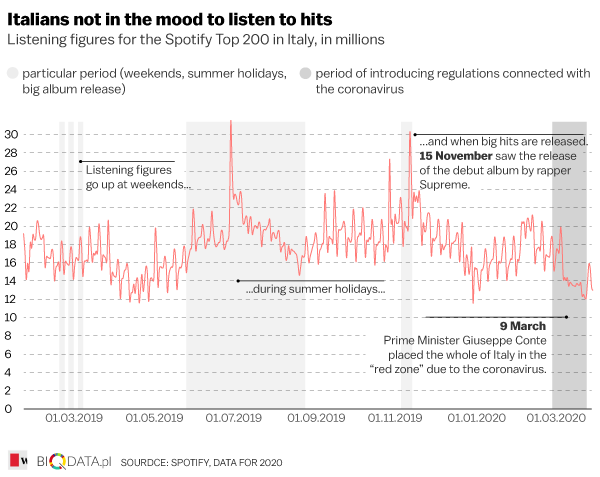 The chart also shows a decrease in the number of plays after the weekend starting on Friday, 6 March. That Monday, 9 March, was when Prime Minister Giuseppe Conte announced that the whole country was going into quarantine. The epidemic gained momentum and we can only assume that the Italians locked in their homes were glued to what was going on in the news.

How can you explain the changes in user behaviour? Ewa Góralska from MullenLowe Mediahub believes that changes in user behaviour were related to fear. In the face of a threat, people look for information rather than entertainment, because it increases their feeling of control. It is also possible that the younger users may turn to YouTube or Netflix, as well as video games.

This is no time to party

The Top 200 list does not allow any definitive conclusions to be drawn about the number of plays on the service. The average age of the Spotify listener may vary from country to country. In Poland, the service attracts a relatively young audience, and many of the Top 200 artists might not be recognised by the average listener over 30 years old. This means that a change in the behaviour of those users not playing the most popular artists may go unnoticed.

Of course, despite drops in the Top 200, it is still possible that users of the site spend as much time on it as before the outbreak of the epidemic. We could assume that they have started to listen to old hits (such as the aforementioned "In the Air Tonight" by Phil Collins) or niche bands, such as British band ‘Daughter’ or Polish group ‘Coals’, though that is unlikely.

Is the observed phenomenon visible only in Italy? What about Spain or other countries that have not been spared? 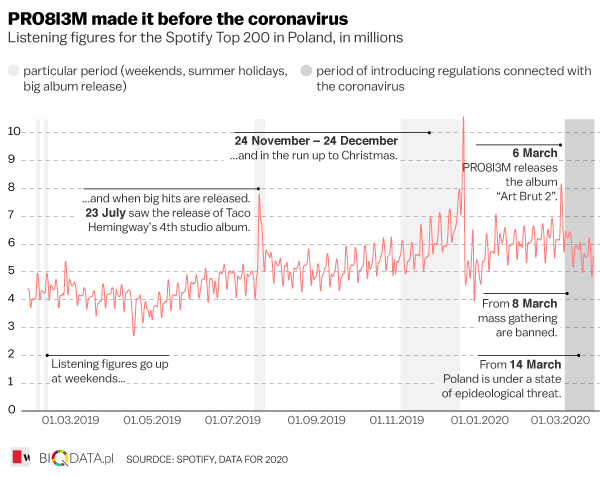 In recent weeks, countries such as Germany, Spain and the United Kingdom have not seen such a significant decline as in Italy, but a slight downward trend is evident. Interestingly, in the case of Poland and Spain, apart from a decrease in the total number of plays, we can also see a blurring of the difference between the number of plays during the week and at the weekend. Perhaps these decreases are due to the cancellation of Friday-night events.

And how do the number of plays in the Polish Top 200 compare to last year's? Just like in Italy, the number of plays jumps up every Friday and drops to a weekly low on Sunday. We never listen to the most popular songs as intensely as in the run up to Christmas, peaking on Christmas Eve. "Last Christmas" has been a constant at the top of the list.

Comparing Top 200 listening figures year-on-year can be misleading, however, because Spotify is a growing service and its reach in different countries is expanding. This can clearly be seen in the chart, where we show the different countries side by side. Poland – although it has a larger population than Sweden – has fewer Top 200 listeners. The potential is significant. And more users means more plays year on year. 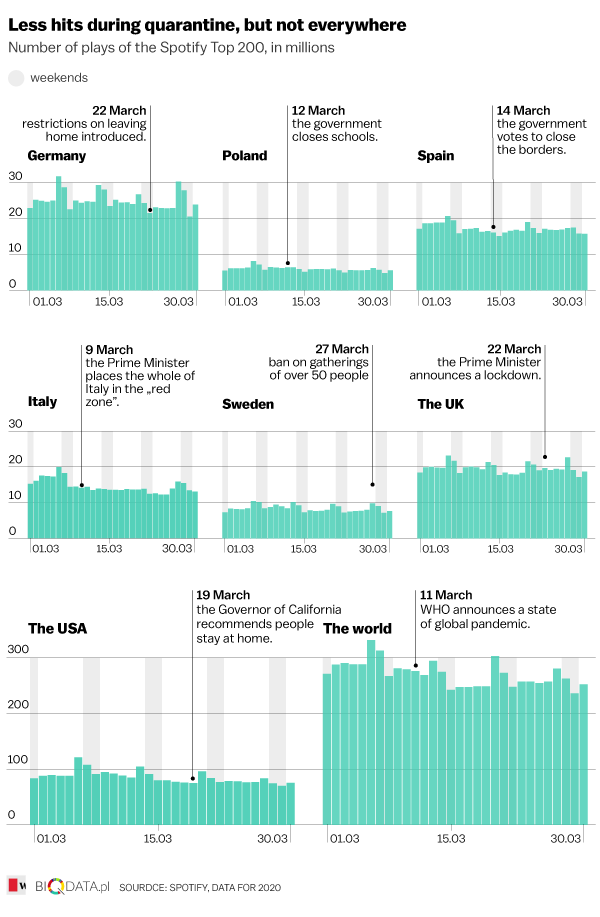 In Poland, there is not such a clear seasonal growth during the summer as in Italy. The graph gradually increases almost all year round, which may be to do with the constantly growing number of users. Apart from holidays, only premieres of hits are able to boost the listening figures, sometimes even by 100%. A good example of this was seen at the release of Taco Hemingway’s fourth album, or the release of “Art Brut 2” by the rap duo Pro8l3m, which came just two days ahead of the ban on public gatherings.

Though not to quite the extent as in Italy, Poland has seen a decrease in the numbers of plays in recent weeks. After the ban on mass gatherings was introduced on 8 March, the contrast between listening figures during the week and at the weekend has also lessened. The fall in the number of plays year-on-year is not drastic, but is visible.