Is the EU failing Tunisia?

On September 15, Tunisia will held the second presidential election of its democratic history. What has the EU done to sustain the democratic transition? In the face of political commitments and economic resources flowing from Brussels to Tunis, progress is wanting. 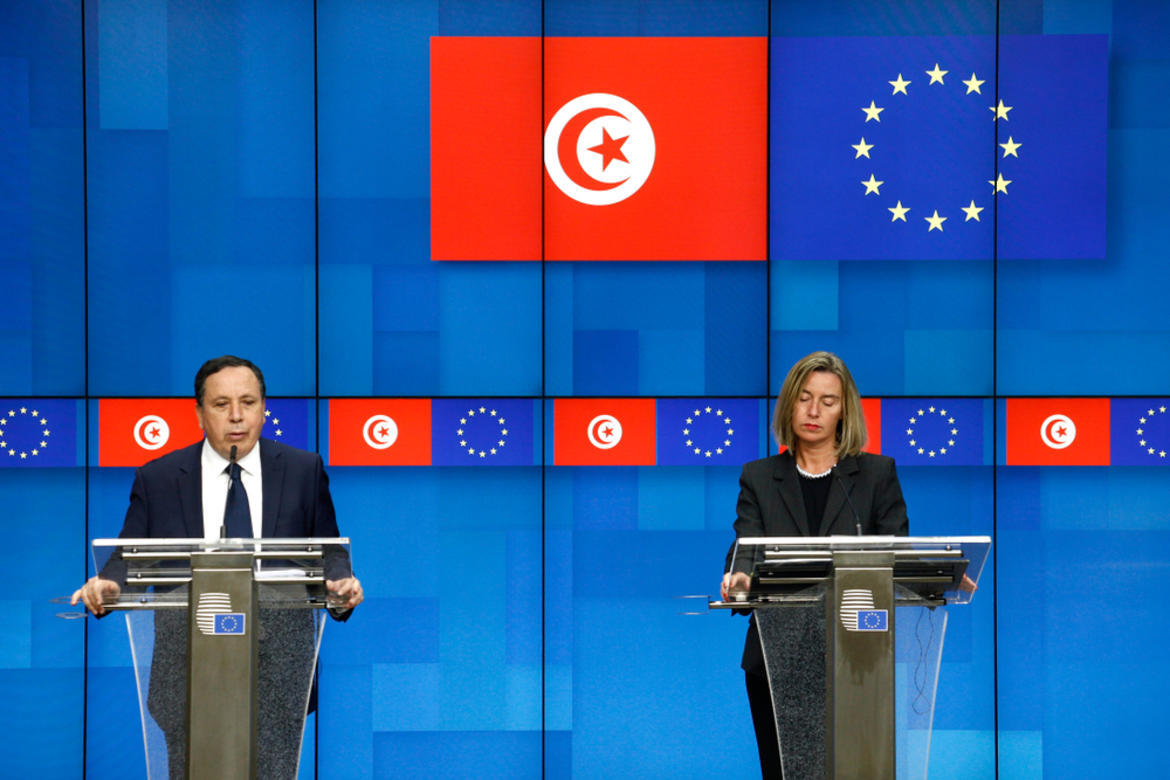 After the death of President Beji Caid Essebsi in July, this weekend Tunisian citizens are called to elect their new Head of State, for the second time in their democratic history. And once again Europe is going to be part of the picture: on the request of the Tunisian Independent High Authority for Elections (ISIE), an EU Election Observation Mission (EOM) has been sent to Tunisia to monitor the electoral process . As a matter of fact, the EOM mission is just the latest chapter of a special relationship that has been growing over the past few years, if not decades.

Indeed, the first economic agreement concerning trade between the EU and Tunisia dates back to 1969. It was followed almost ten years later, in 1976, by a cooperation agreement focusing on economic and social development. On the bulk of these milestones, an association agreement was ratified in 1995. Remarkably, all these arrangements came long before the democratic turn of 2011. But of course, the Jasmine revolution changed everything. The EU was called to step up its economic efforts in Tunisia, if not for securing stability in what is considered a geopolitical hotspot. So much so that, after the outbreak of the Arab Spring movements, the EU upheld democratisation in Tunisia providing resources and effective policy actions through its European Neighbourhood Policy (ENP) as much as institutional momentum by means of official visits of its leaders.

The EU’s action in Tunisia

Given the sheer amount of resources that have been deployed, one could argue that Tunisia somehow represents the golden boy of the Maghreb region in the eyes of Brussels. Remarkably, in 2016, on the occasion of a debate dealing with Tunisia in the European Parliament, the High Representative of the European Union for Foreign Affairs and Security Policy, Federica Mogherini, said : “The EU’s engagement in Tunisia is: making a difference in very concrete terms. It’s one of those places where us, and only us, can make such a big difference”. But could we, really?

The reality behind the fanfare can be quite delusional, as a variety of reports recently have pointed out that Tunisia’s progress in terms of economic, social and democratic development is ambiguous. Starting off from the economy, figures 3 to 6 give an overview of Tunisia’s stagnation (meanwhile, the country managed to lower considerably the level of poverty, although stark differences persist between rural and metropolitan areas. For a comprehensive overview see OECD ). Remarkably, the country was backed by international creditors to solve its budget problems. By the way, the EU contributed by means of a Macro Financial Assistance (MFA) program that reached several hundred millions of Euros (see orange areas in figure 2).

One might thus question Mogherini and, most of all, wonder whether EU interventions under the ENP had concrete effects, after all.

“There are some crucial economic problems, which were part of the reasons why the Arab Spring movements broke out that have not been tackled so far. They are still unravelling Tunisia. But this shouldn’t lead us to affirm straight away that EU actions had no effect”, explains Iole Fontana from the Department of Political and Social Studies of the University of Catania and author of European Neighbourhood Policy in the Maghreb . Several EU budget support measures to back economic recovery were coupled with strong political reform conditionalities. Consequently, resources labeled as 'economic reform' are also related to those fostering 'governance and democracy'.

Nevertheless, youth unemployment is rocket high. All this in the face of this considerable amount of resources aimed at "economic reform and activation". So why then did not the ENP foster concrete progress on the ground? “Because local actors and domestic conditions may constrain EU action. Moreover, time and resources have been used by domestic political actors to deal primarily with the management of political issues and crises, instead than providing answers to economic grievances”. In other terms, it is fair to say that, after 2011, the political game between parties superseded everything else, starting off from the claims of younger generations.

Indeed, in a report published by Carnegie Endowment , experts Sarah Yerkes and Zeineb Ben Yahmed explain that Tunisia needs to move from a system based on “consensus” between political parties towards another one featuring “competition”. Such as shift is much needed to make democracy actually alive: “While the consensus model was crucial in protecting the fragile transition in 2012-2013 and helped society heal from a painful period, the national unity government failed to move the country forward at the legislative level”. However, it is difficult to achieve such a transition in a politically fragile context. And, paradoxically enough, the consensus model was somehow the result of the actions of the Tunisian National Dialogue Quartet which, in 2015, was awarded with the Nobel Peace Prize .

At this stage, one could, at least theoretically, expect consistent progress in the fields of governance and democracy. But, unfortunately, looking at indicators in Transparency International’s Corruption Perception Index , The World Bank’s data-repositories, Afrobarometer (#1 , #2 ), or Freedom House’s Freedom in the world report, Tunisia’s score appears, once again, ambiguous at best (figures from 7 to 9).

Fontana admits that “there is a tendency to overestimate the efficacy of policies promoting democracy steered from abroad. Sometimes we believe they are a panacea for everything. But if conditions for implementation are not met and local actors do not cooperate, there is little the EU can do”. Anyhow, who are the actors Fontana is referring to?

In a nutshell, the political class, the public administration and civil society organisations. Is there any specific actor that can, thus, be considered responsible for the current stagnation in Tunisia? If the political class has been “very collaborative, I would not argue the same for the public administration”, Fontana says. “Many civil servants were linked to the former Ben Ali regime and resisted concrete reforms”. Moreover, at times, “the relationship with civil society actors was difficult too”.

Although this might come as a surprise, “in the aftermath of the uprisings some NGOs threw suspicion on the EU, in light of the fact that Brussels never spoke out against the Ben Ali regime before the revolution and, instead, prioritised stability in the region. Moreover, the EU had often to deal with competing claims of civil society organisations, blaming each other for having been attached to the authoritarian regime”. More generally, all local actors on the ground face a dilemma in relation to two opposing logics of action, the one of continuity with the past and the one of change, Fontana concludes.

Mounir Baatour, the president of SHAMS (an NGO and radio station advocating for the depenalisation of homosexuality in the country) and president of the Liberal party (a minor formation, among the hundreds of political parties) argues that the impact of the EU has been “positive”: “The interventions by the EP’s LGBTI Intergroup concerning the violence against LGBTQI+ people in Tunisia were important to highlight the issue and bring the topic to the fore”.

At the same time, Baatour claims that, since the outbreak of the Arab Spring, the situation of the LGBTQI+ people in the country, “has worsened”, adding up another twilight layer to the picture. But if the impact of EU measures appears unclear, the scenario doesn’t appear to hinder the EU from planning to do more of the same. Besides the whole lot of resources already allocated to Tunisia between 2011 and 2017, on the EC’s website one can read that, between until 2020, “the EU's bilateral assistance to Tunisia under the ENI”, will support the country “with an indicative allocation of 504 million-616 million Euros”. Meanwhile, all this might distract us from what could be the real game changer for Tunisia. It comes with another acronym: DCFTA.

I can’t get no liberalisation

The negotiations for a Deep and Comprehensive Free Trade Area (DCFTA) between the EU and Tunisia were launched in October 2015. The project aims at shutting down the remaining obstacles in terms of quotas, tariffs and other types of commercial barriers between the country and the EU, as well as fostering regulatory harmonisation. As in many cases before, this negotiations can be seen as part of the wider EU strategy to foster development in countries outside of the Union through the liberalisation of product- and services markets and the integration with the Single Market. But does it actually come for the better or the worse for Tunisia?

According to the EU, there is little doubt, of course. Back in 2016, in Tunis, former Neighbourhood Commissioner, Johannes Hahn , said that there will be “many opportunities for Tunisia” once the DCFTA will be in place. Moreover, the negotiations kicked-off with a sustainable impact assessment that put on paper what kind of benefits could be reaped by Tunisia. Yet, as the negotiations have completed the fourth round, several scholars voice their concerns.

In a research report , policy note and web article , Werner Raza, Jan Grumiller and Bernhard Tröster from the Austrian Foundation for Development Research (ÖFSE) in Vienna warned about the disproportionate pressure for trade liberalisation put in place by the EC on Tunisia. “The DCFTA is the focal point of a heated debate between different actors in Tunisia. And its effects on the fragile economic and political structure of the country should not be underestimated”, explains Tröster to EDJNet.

Yet, why should we worry when an impact assessment paved the way to DCFTA? “The assessments on which the negotiations draws focus largely on the long run. Whereas, we should care much more about the intermediate adjustment process”. That is: the effects on the economy day by day, so to speak. Moreover, “regulatory harmonisation between the EU and Tunisia, would represent a huge cost for the latter stakeholder. Both the private and public sector could struggle to abide by European standards”. To give a concrete face to the DCFTA, Tröster and his colleagues forecast the impact of the DCFTA on the Tunisian GDP, depending on different scenarios and degrees of liberalisation (Figure 10).

Keeping in mind the already worrying context of the Tunisian economy, as well as the decline in institutional trust – not to mention the weak capacity of EU programs and Tunisian institutions to have an impact on the ground – one cannot but raise the question: is the EU pouring oil on fire with the DCFTA negotiations? “Claiming that the EC aims at harming Tunisia intentionally, is certainly not true. Brussels is simply following its beliefs in matters of trade and liberalisation”.