Cyprus: At the centre of the arm-wrestling between Greece and Turkey

The discovery in the last few years of large gas reserves in the region has whetted appetites in Ankara, which has been forcefully demanding its piece of the pie, even at the risk of contesting the limits of respective economic zones as well as provoking the EU’s intervention and threatening the region’s stability. 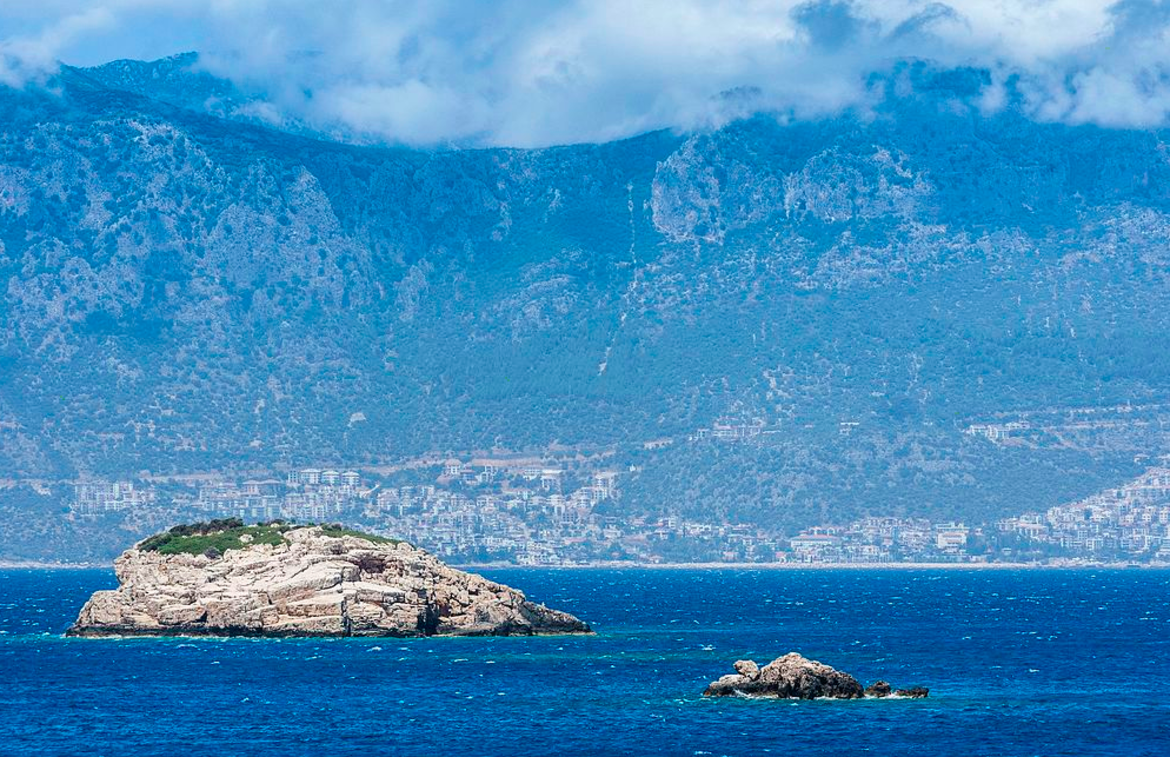 Though normally sparkling and crystal clear as August draws to a close, the Mediterranean is currently troubled by politics. At the center of this new storm are the aspirations of Turkish president Recep Tayip Erdogan. It all started in mid-August when Turkey deployed an oil research vessel, the Oruç Reis, with its naval escort, to search for petroleum and natural gas in the waters near the Greek isle of Kastellorizo – waters which are claimed by Athens and Ankara as belonging to their respective exclusive economic zones (EEZ, over which a country has sovereign rights regarding the exploration and usage of resources).

The two countries then engaged in a naval power struggle which caused a collision between two Greek and Turkish war ships, pulling the region towards the kind of explosive situation that has not happened in nearly twenty years – to such an extent that French president Emmanuel Macron dispatched French military reinforcements to the region.

With Egypt and France being in open conflict with Turkey and Libya, there is no longer any doubt that the Eastern Mediterranean is caught in a storm where European interests on one side and the interests of the countries of the south-eastern edge of the Mediterranean (especially Egypt, Israel, and Libya) on the other side, clash.

What the struggle is about

For decades, disputes about the region’s maritime borders were mostly a local affair, limited to claims of sovereignty between Cyprus, Greece, and Turkey. However, discoveries of large gas fields in the last few years have whetted Turkey’s appetite, which has been forcefully demanding its piece of the pie.

From these large gas fields emerged new alliances in the region in order to secure future exports. For example, between Cyprus, Israel, and Greece or between Greece, Israel, and Egypt, with a sizable European ally – France – who, year after year under Macron, affirms its cooperation with the Republic of Cyprus in matters of defense. The French president, who believes that the EU still has too little influence in the region, is taking advantage of Brexit and the United Kingdom’s withdrawal from European affairs in order to expand the influence of France and the EU in the eastern Mediterranean.

The discovery and agreements on the exploitation of the “Zohr” gas field resurrected Cyprus’ gas industry and its capacity to be a part of regional projects, such as a gas pipeline to continental Europe. For its part, Turkey considers the potential exportation of gas through Cyprus and Greece as a threat to its own ambitions as a transit country of gas to the EU from the Caspian Sea and central Asia. 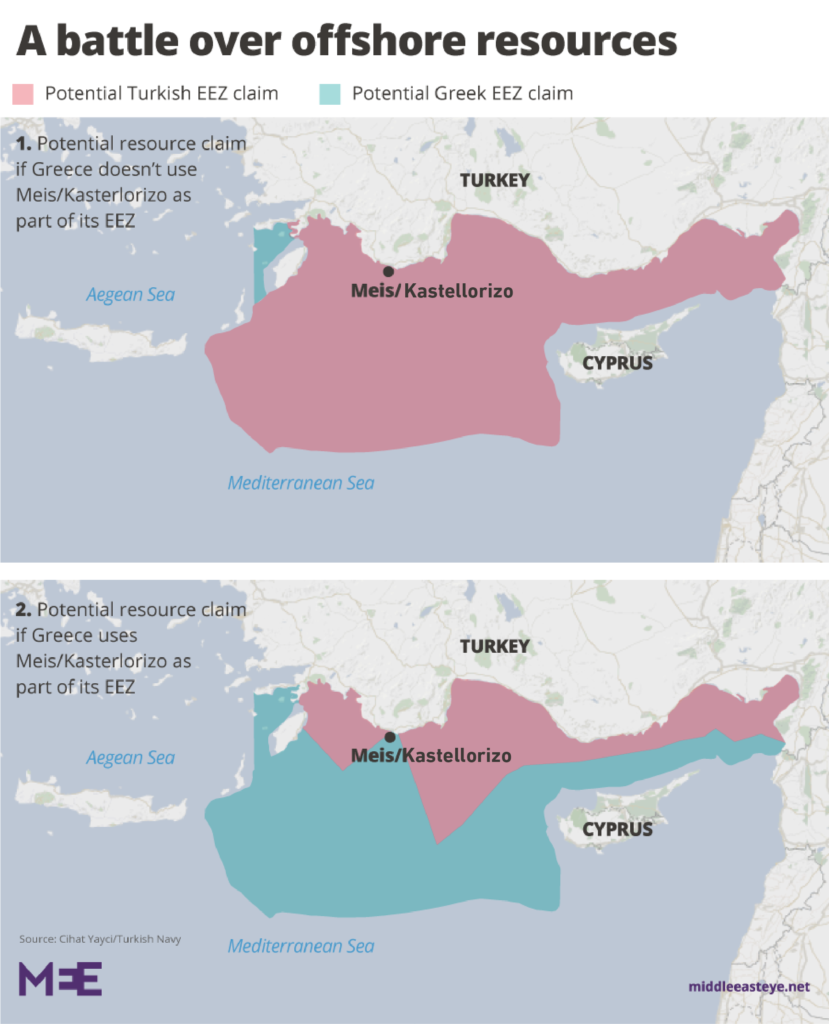 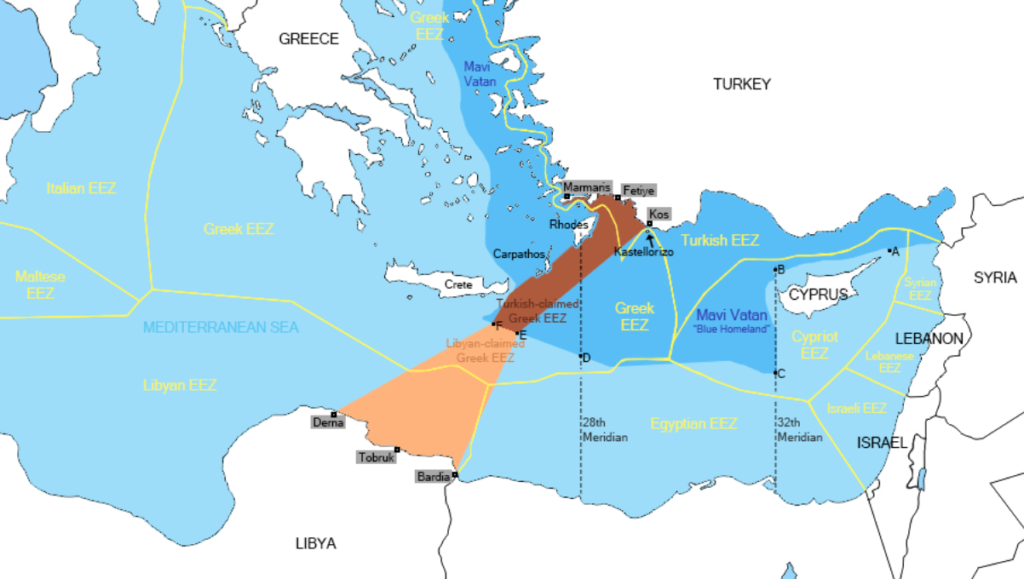 The shared Turco-Libyan area of operations according to the agreement concluded in 2019 by Ankara and Tripoli. In dark blue, Turkey’s “blue territory” (Mayi Vatan). In yellow, the demarcation of Exclusive Economic Zones (source: Mapporn | Reddit )

What’s more, Turkey considers  that the agreements on maritime border delimitation between neighboring countries are the result of a “fait accompli” and unjustly and illegally deprives it of a part of its legitimate EEZ. Ankara, which is not a part of the United Nations Convention on the Laws of the Sea (UNCLOS) of 1982 due to its dispute with Greece over the extent of its EEZ, signed an agreement on maritime delimitation with Libya in December of 2019. This agreement encroaches on the Greek and Cyprian EEZ and Turkey can therefore lead gas exploration in its waters as it sees fit. It is an agreement which is deemed to be null and void by the Egyptian, French, Greek, and Cyprian governments.

It is in this context that on August 6th, Athens decided to get even with Ankara by signing a maritime delimitation agreement with Cairo, eliciting Turkey’s ire. A few days later, Turkey dispatched the Oruç Reis ship to the Greek EEZ. The European Union invariably showed its unequivocal support for Greece and Cyprus, but the Union sometimes lacks cohesion when faced with Turkey’s moves. 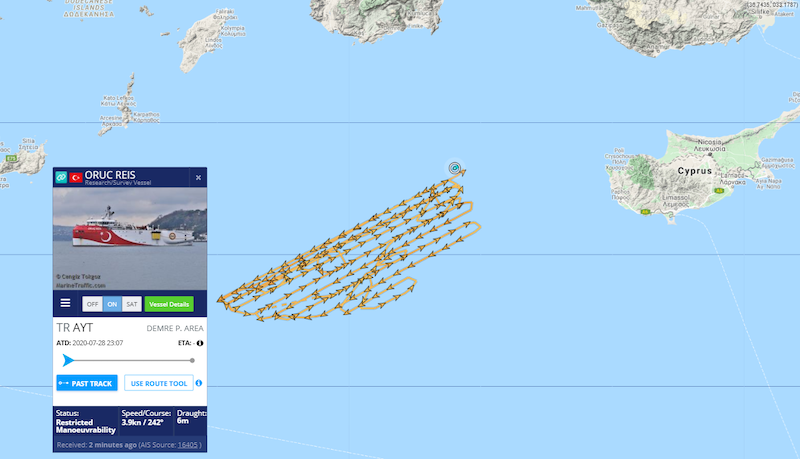 The position of the Oruç Reis between 10 and 27 August morning (source: MarineTraffic ).

Follow the position of the Oruç Reis over the last 24 hours: