Copyright reform, protests in view of the final vote

On March 26, the European Parliament will vote on a very criticized directive. A few days before the vote, online protests are taking place. 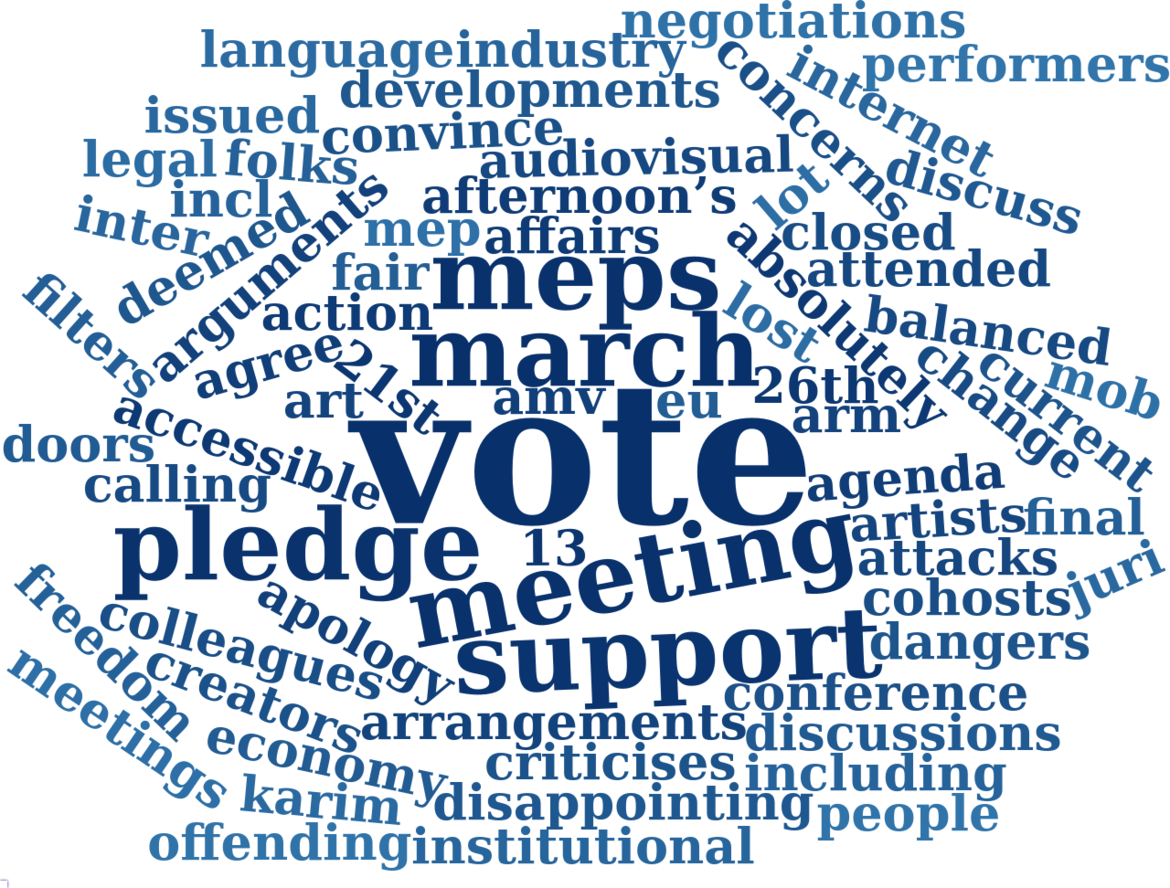 This word cloud shows the frequency of terms used in tweets by MEPs containing the hashtag #CopyrightDirective. The Quote Finder tool allows for customised analysis and the tracking of other relevant information.

“We’ll discuss and vote on the Copyright Directive on Tuesday, March 26th. A change is still possible but unlikely”. This tweet by MEP Tiemo Wölken (S&D) uses the hashtag #CopyrightDirective, referring to a highly contentious subject that has given rise to much criticism and significant opposition, not only in the Parliament.

There’s a wide range of hashtags: #article13 and #article11, referring to the most controversial articles of the directive, #SaveYourInternet, #copyright, #uploadfilters, and #ForTheWeb. Certain opposition campaigns have rallied around #fixcopyright and #SaveYourInternet.

On February 13th agreement was reached following negotiations between the European Parliament, Commission and Council. “Large online platforms should no longer be able to earn money by using journalists' and artists' content without paying them fairly. These new rules on copyright are tailored specifically for the digital age and concern platforms such as YouTube, Facebook and Google News”, reads the statement published on the European Parliament’s website .

While a day of protest scheduled for March 21st is declared for Wikipedia pages in German (and may also take place for pages in Swedish , Italian and other languages), the final vote on the text (here is the version agreed upon ) is set for March 26th. Wölken, however, highlights the possibility of a postponement:

The date of the final vote may change.

For the moment, however, the vote remains officially scheduled close to the European elections, such that a campaign to ask representatives to “take the pledge” - launched by various independent organisations - invites electors to vote only for those who intend to oppose the reform.

Among MEPs, Julia Reda (Greens/EFA) is the most active: on social media she interacts with, responds to, and promotes relevant hashtags and information. In one series of tweets Reda claims that the EU’s copyright rapporteur Alex Voss (EPP) has revealed his intent to defend copyright at any cost, even to the point of ruining the internet .

On her website Reda summarises key passages of the reform and - according to the MEP - the most troubling aspects: article 11, which would penalise the use, by small sites and publishers, of preview links and snippets, while at the same time making it easier to spread fake news (because the more disreputable outlets would not claim any copyright on links, headlines, or snippets); article 13, which requires platforms to take responsibility for content uploaded by users, leading to the creation of preventative, restrictive and limiting filters, damaging platforms such as Wikipedia, and other platforms which involve code-sharing; and article 3, establishing copyright restrictions (except for research institutions) on text and data mining methods, which would harm the work of journalists and researchers in private institutions.

“Your memes are safe. Freedom of expression is not affected. It’s all about fair payment to content creators”, proclaims the official Twitter account of the European Parliament:

Watch to learn more about the #copyrightdirective ↓ pic.twitter.com/ztYzrl4sdH

“All of the three statements are disputed”, claims MEP Yana Toom (ALDE) in her direct response to the tweet, before noting the need for more transparency in the Council’s discussions:

A meeting behind closed doors on #CopyrightDirective is going on in the @EUCouncil right now. As I pointed out in the #Transparency report: these meetings should be accessible, for example via livestream, then we would know what's going on: https://t.co/CCHZYekK9y

Among the MEPs supporting the provision, besides the rapporteur, is Sajjad Karim, who approvingly cites a passage from the press conference which followed the agreement. Silvia Costa (S&D) is also supportive, and speaks of a “defamatory” campaign against the directive:

But the voices of dissent come from many quarters, and take their lead from initiatives of various kinds. Beyond those already cited there is for example Save Your Internet , promoted by EDRI, an association of European civil and human rights organizations focused on digital issues.